How to Make Organic Evaporated Milk

By Leela on November 18, 2008 in She Deglutenizes, She Simmers 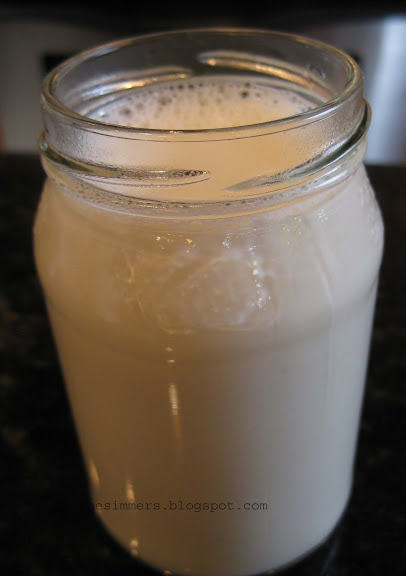 In the past several months, I have been reading up on food additives and government regulations regarding food labeling. While that has been a very educational process, it has also opened my eyes to a lot of things I wish I didn’t know about what goes into consumer packaged goods and the sly ways in which food manufacturers list their ingredients so you wouldn’t know that, for example, “natural flavoring” isn’t all that “natural.” I’ve been trying to keep my concern from reaching the point of paranoia, but it’s getting more and more difficult the more I know.

For example, that immaculately white powder I used to put in my coffee is, as it turns out, not as innocent as it looks. Its liquid counterpart is just as bad. First ingredient on the list is corn syrup solids, closely followed by partially hydrogenated soybean oil (trans fat). Then there are Mono- and Diglycerides as stabilizers, Sodium Aluminosilicate as an anti-caking agent (the same substance used to make fertilizer and dishwasher detergent and to remove ink from waste paper), artificial flavor, and sometimes Silicon Dioxide (an anti-caking, anti-foaming agent). And these days, one could only pray that the milk derivatives used to make these powders aren’t shipped directly from the country/countries where Melamine and food merrily mingle.

Black coffee is not an option for me. But none of the other alternatives is good enough. Nonfat milk powder tastes crappy. Regular milk dilutes my coffee and turns it frigid and ugly. Half and half or cream is okay, but I don’t really dig the taste or the fatty film it leaves on my tongue. Soy milk makes my coffee taste funny.

I have recently switched to evaporated milk which I thought tasted great. Sadly, it is still far from being additive-free. Dipotassium Phosphate and partially hydrogenated soybean oil are routinely added to it. To date, I have not found organic, garbage-free evaporated milk. If such a thing exists, it is not readily available where I am.

The goal is to reduce the milk by 60% in order to produce a very creamy and concentrated result. I decided to experiment with half a gallon of organic milk. Forty percent of a half gallon translates roughly to three cups or 24 fluid ounces. At the beginning, I poured only three cups of milk into the pot which I planned to use. That gave me an idea of how high up from the bottom of the pot three cups of liquid would be. Having mentally made a mark on the side of the pot, I poured in the remaining milk and started the process. 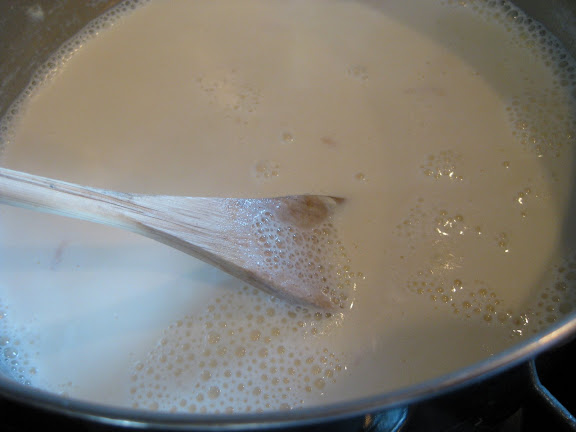 Now a word about the pot: you should use a heavy-bottomed pot – a pot whose bottom is as nonstick as possible – preferably a wide one (the larger the surface area, the shorter the evaporation process). Stir quite frequently with either a wooden spoon (very good) or a heat-resistant rubber spatula (even better). You want to stir frequently and scrape off any sticky bits at the bottom of the pot as you go.

Once the milk comes to a boil, reduce the heat down to very low. At this point, the milk no longer needs to be stirred constantly. Still, you should give it a stir and scrape the pot bottom every 7-8 minutes or so.

The other issue comes from the “skin” which the hot milk forms on top no matter how low the heat is. It’s unavoidable. The skin needs to be fished out and discarded or at least stirred back into the milk from time to time. It won’t melt into the milk, but if you don’t do anything to it, the skin will act as a protective layer that keeps the moisture from evaporating through the surface.
At this point, don’t worry about the milk “skin” or the brown bits you’ve scraped off the bottom. Everything will get strained out later on. Your biggest concern at this juncture is to make sure the milk doesn’t burn or boil over. The heat should remain low and the milk steaming not boiling.

As the water content decreases, the volume will start to lessen and the milk will become thicker, creamier, and more concentrated. Once the milk level reaches the 3-cup point which you have previously marked on the side of the pot, it’s done. The finished product is then taken off the heat to be strained. 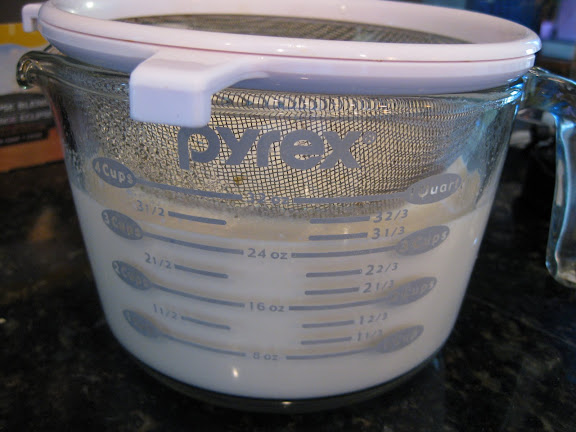 Once the milk is completely cooled, I put it in glass jars. Evaporated milk keeps in the refrigerator for a couple of weeks. 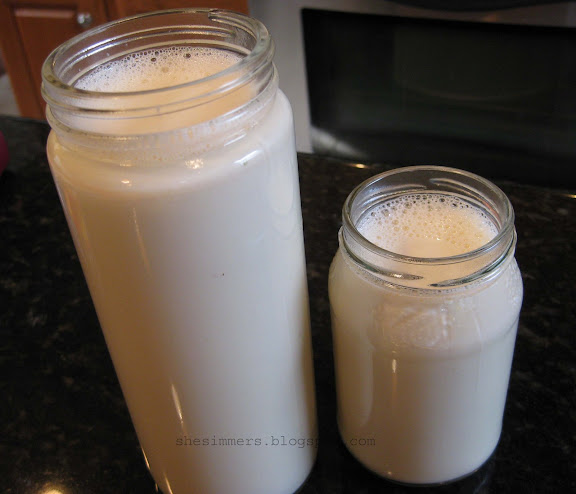 44 Responses to How to Make Organic Evaporated Milk