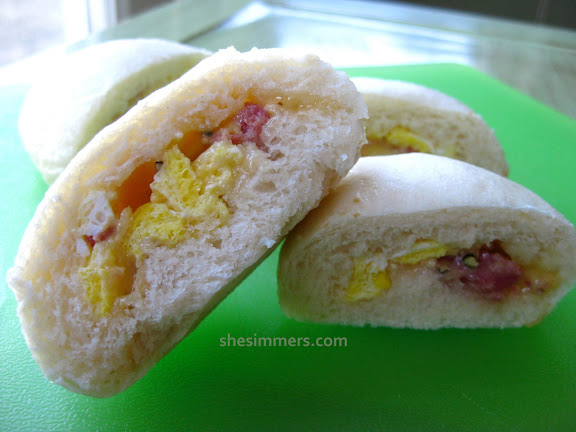 I wasn’t planning on doing a spin-off on the bun post. But this is for a reader by the name of Mike C. Why? Because he asked. (Thanks to you, Mike, not only do I have something to blog about, but I am also equipped with two dozens grab-n-go breakfast baos in the refrigerator.) Also, another commenter, gagz135, mentioned an idea which I had done for quite sometime, i.e. to fill the plain buns with ham and cheese. That’s essentially what these breakfast buns are about.

There’s not a recipe, really. It’s just a matter of filling the buns (either the original recipe or the one that produces buns with lighter texture) with the protein parts of your breakfast. A combination of soft-scrambled eggs, cold cuts, and any kind of semi-soft cheese, works well. The cheese is important, because it will melt during the steaming process and “glue” the egg bits and the meat bits together. Without the cheese, your filling will be very crumbly which is fine tastewise, but makes it pretty darn hard to eat without spilling stuff all over yourself.

For the batch shown here, I mixed two large eggs, scrambled, with a quarter of a cup each of cubed salami and cubed smoked Gouda (with built-in coarsely-cracked peppercorn). I like the combination of cured meats and smoked cheeses, because it introduces a smoky element to steamed bread which is intrinsically bland. Fire and smoke teaming up with vapor, if that makes any sense. But, of course, you use what you like. Pre-crisped bacon bits are also delicious. If you like a little zip in your breakfast buns, add chopped pimiento or peperoncini. Anything you want, really. Be the master of your filling domain. 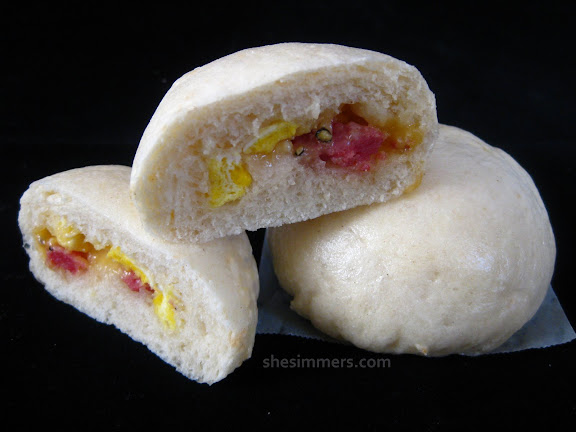 All you have to do is divide the dough (after the first rising and after another teaspoon of baking powder has already been incorporated into it) into 12 equal pieces. With your fingers, flatten each dough ball into a circle, approximately 4 inches in diameter. Place about two tablespoonfuls of the filling into the center and carefully gather up the edges and pinch to form a good seal. Then what I do is place each one of the filled buns on a piece of waxed paper seams-side down to get a smooth top. The filled buns are then left to rise the second time and steamed for 10 minutes. (See more detailed instructions in the original post.)