By Leela on March 16, 2009 in She Deglutenizes, She Steams, She Stocks a Thai Pantry, She Thais, She Veges 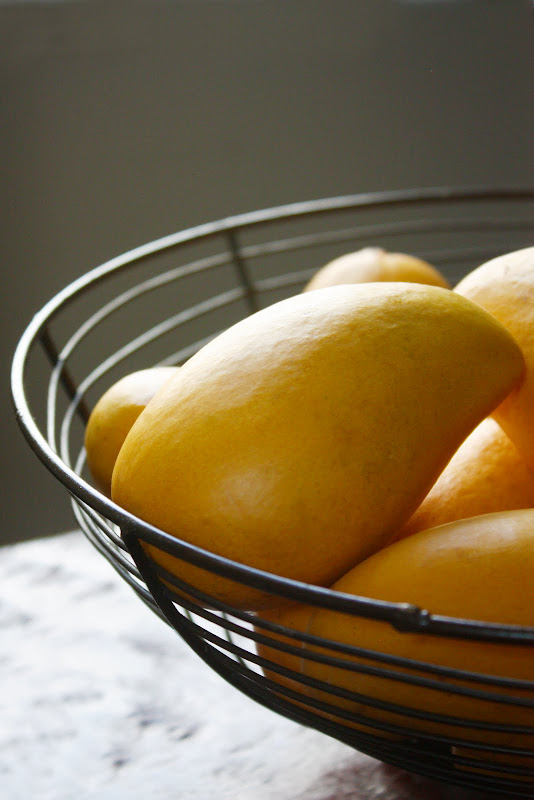 Southeast and South Asian people are usually gentle and polite — sometimes to the point of being shy and withdrawn — in social situations. But if you put them all together in one place and one happens to make a bad move of claiming the types of mango (banana, coconut, etc.) found in his/her country are superior to those found in the rest of the region, things could get awkward at best and ugly at worst. So even if I do think Thai mangoes are the best, I rarely say that out loud.

Okay, I’m going to remain ducking under the table until you Malaysian, Indonesian, Indian, Filipino readers put away your broomsticks.

This time of year, those in Thailand are starting to see more and more mangoes in the market and I’m here in Chicago totally depressed. The beginning of the mango season in Thailand can only be described as magnificent in the most literal meaning of its Latin etymology. At least, there was excitement to that degree in our family. We love mangoes and durians, as do most other Thai families. The fact that the mango season is closely followed by the durian season only increases the joy ten-folds. It’s like nature’s way of apologizing for turning on the heat and humidity full blast during the months of April and May.

[As a side comment, though I can see why durian is referred to as the king of fruits, whoever took the liberty of crowning mangosteen the queen of fruits has some explaining to do. I just don’t understand why the much, much more delicious mango doesn’t make it into the royal fruity palace.]

In the backyard of the house in which I grew up there were at least five different kinds of mango trees. They started budding and blooming in the colder months of December through mid-February. Then the withered flowers gave way to baby mangoes the size of the tip of your pinkie. At a risk of sounding like a kid who didn’t have a life, one of my favorite things to do was checking on the growth of the mangoes every morning before I left for school. By the time April rolled around, these wee mangoes would have grown into full-sized mangoes, ready for harvest.

My grandmother would snap full-grown, yet green, mangoes right off the branches, one by one, with a bamboo basket attached to the tip of a long pole. For the ones meant to be consumed when green, we would eat them right away. For those meant to be eaten when fully ripe, we would let them ripen, undisturbed, in the basement.

The Thai people are very picky when it comes to mango. (I have previously stepped on some international toes by expressing my shamelessly-bigoted opinion in my post on mango-lime jam). Thailand might be a country that seems to get a new prime minister and cabinet every Tuesday afternoon as we take our time deciding just what kind of democracy we dig the most, but certain things remain static.

The mango rules kick in big time when it comes to choosing the right types of mango to pair with sweet coconut sticky rice. As far as I know, only two types of mangoes are principally used for this very purpose: Ok-Rong and Nam-Dokmai.

Though pairing other types of mango with the coconut sticky rice probably would not result in one being murdered and buried in an unmarked grave, it would most definitely result in the perpetrator being stared down by a mob of miffed Thais. Respectable Thai restaurants in the US always pull this dessert off the menu when good mangoes are out of season. That tells you something. 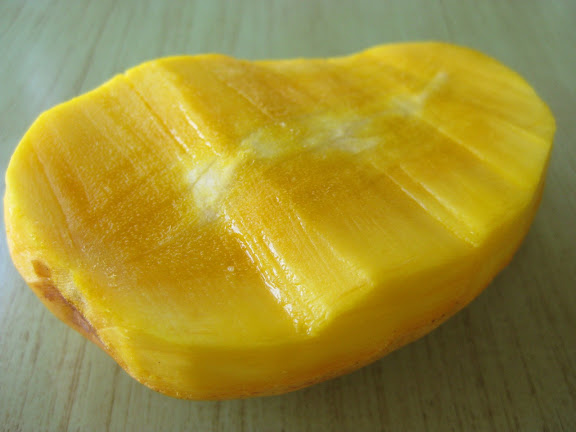 The closest thing to the aforementioned Ok-Rong and Nam-Dokmai is Manila or Ataulfo mangoes (shown here) which are widely available in the US. They’re light green when green (oh, so helpful …) and dark yellow with a tint of orange when ripe. In stark contrast to the disgusting greenish-reddish mangoes that are available all year round in the US, Ataulfo mangoes have all the characteristics of good eating mangoes: meaty, non-fibrous, fragrant, and very sweet. If you see this type of mango at your local grocery store, by all means, buy them by the case.

The mangoes shown here present an example of what ripe mangoes look like. However, personally, I would let them sit on the kitchen counter for 2-3 more days until the taut skin turns a bit wrinkly. That is when I know they are perfectly ripe and sweet with no trace of tartness left. Only then will they be good enough to pair with the sweet coconut sticky rice. Biting into a piece of tart mango and sweet sticky rice is one of the biggest food bummers of all time, in my opinion.

There are many kinds of mango in the market, but only few are suitable mates for your coconut sticky rice. So, to quote the Grail Knight from Indiana Jones and the Last Crusade, choose wisely.

How to Peel and Slice a Mango
What Kind of Rice Is Thai Sticky Rice?