How to Choose, Prepare, and Eat Mangosteens

By Leela on July 23, 2009 in She Deglutenizes, She Explores, She Uncooks, She Veges 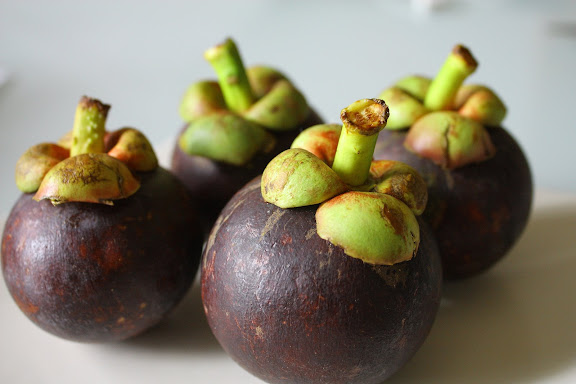 My love for mangosteens or มังคุด Mang Kut (the first syllable rhymes with “young” and the second with “put”) is legendary. There’s even a picture of me as a toddler sitting next to a gigantic pile of empty mangosteen shells with curious purple stains around my lips. With an innocent face, I stare blankly at the camera as if to say — I have no idea who ate these.

Informally dubbed “the queen of fruits,” taking a second place only to durian, the reigning monarch of the fruit kingdom, mangosteens have proven themselves worthy of the royal title. The flesh boasts a variety of textures: crunchy in some places, firm in some places, but mostly soft and creamy. The flavor is a combination of sweet and a tinge of tartness. I was recently asked on Twitter to describe the taste and texture of a mangosteen and I struggled greatly before arriving at what I thought wasa pretty lame answer, though I couldn’t come up with anything better. The truth is there’s nothing like Mang Kuts.

Sadly, fresh mangosteens aren’t always readily available in the US. They usually come frozen or canned (shudder) in most Asian grocery stores. Otherwise, mangosteens are marketed in juice form as one of the tropical super-fruits. I have sometimes seen fresh mangosteens at a local Vietnamese market, but there’s something about those fresh mangosteens being capless and bald that has always stopped me from buying them. They may actually taste fine, but they look a bit scary to me.

Just moments after landing in Bangkok, I dashed to the nearest green grocer and brought home a big bag of fresh mangosteens. Although it may seem like I lacked the patience to wait until I at least unpacked and put on some fresh clothes, the truth is — I was doing this for all of you. Someone needed to take on the responsibility of cracking open these purple beauties so a blog post could be written about them. I am not a glutton; I am a responsible food blogger. 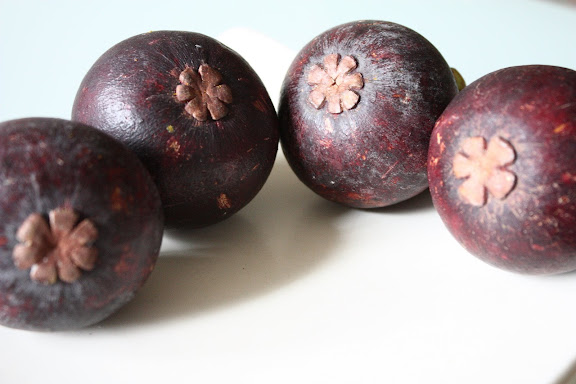 The anatomy of mangosteens is quite interesting. Each one is about the size of a tangerine. They come with four greenish caps at the top. Turn them upside down and you will see the brown raised ridges that look like flowers. The number of the “petals” corresponds with the number of sections in each mangosteen. In other words, you know how many sections are inside a mangosteen just by looking at its bottom.The question you may have is — does it matter how many aril sections there are in a mangosteen? Yes and no. In general, the bigger the section, the bigger the seed underneath the aril. Large seeds need to be spit out and that causes a mild inconvenience. Smaller sections contain no seeds at all or very tiny ones that can be eaten whole. A larger number of sections, therefore, means each section is often smaller in size. This means more edible flesh and fewer seeds to spit out. But, to be quite honest, in a grand scheme of things, this doesn’t really matter all that much. 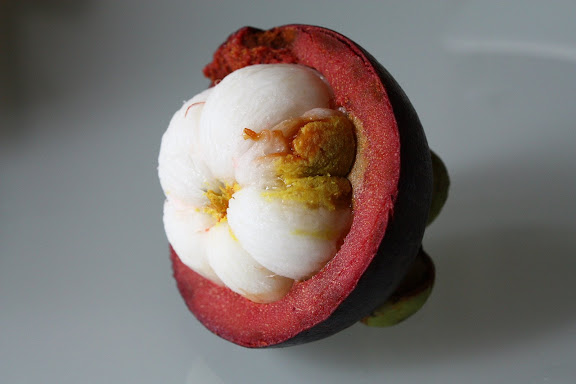 Good mangosteens sport healthy-looking green caps and a nice glossy sheen on their outer skins. They should be firm and have no cracks with juices oozing out or bugs under the caps. Steer clear of ones that have hardened beads of yellow resin on the outer rinds as those often contain sections that have suffered from resin seepage. The yellow sections in the picture above are very bitter. Good mangosteens have aril sections that are opaque white, firm, and not translucent or yellowish. 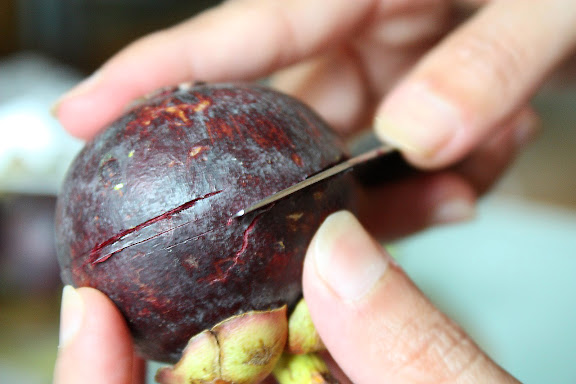 To cut open a mangosteen, with a sharp paring knife, make a 1/4- to 1/3-inch deep horizontal cut around the middle and twist off one half of the shell, exposing the white, creamy flesh. (Knifeless? Fret not. Hold the mangosteen between your palms and squeeze your hands together to crush open the purple shells. Once the shells are cracked, you can easily peel them off. It’s a bit more messy and sometimes results in the sections getting crushed along with the shells, but hey …) Mangosteens are often served half exposed to allow people to pick out the flesh with a small fork. 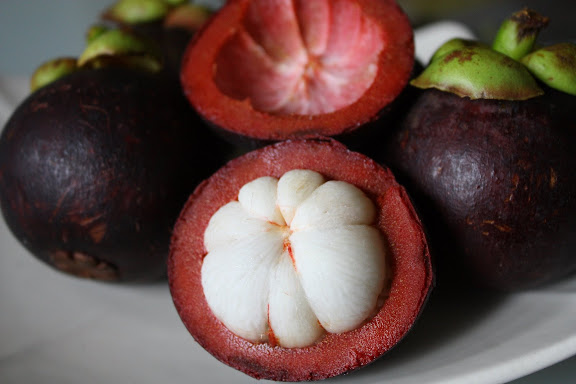 See the sections inside this one? The two larger sections contain hard and bitter seeds that need to be spit out; the other five sections can be eaten whole. Two large sections out of seven aren’t too bad, though better mangosteens contain all smaller sections with but one large seed or none at all.

Mangosteens are generally eaten raw and unadorned. But some people juice them, shell and all. Some make ice creams, sorbets, and fruit salads with them. Some turn them into savory dishes — an idea I’m interested in exploring further.

27 Responses to How to Choose, Prepare, and Eat Mangosteens