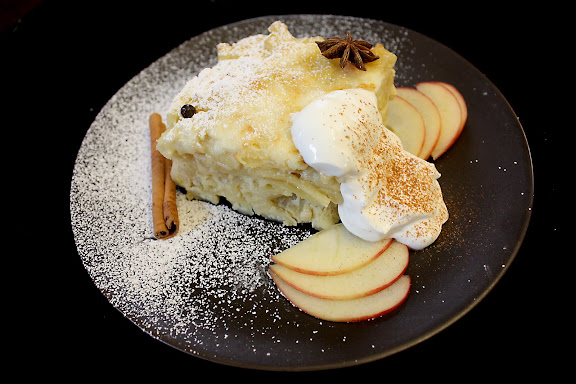 I know this may sound strange to some as many people don’t necessarily consider macaroni and cheese as anything but a savory dish. Nevertheless, the concept of sweet or savory-sweet macaroni and cheese has been around for a long time. Dishes wherein egg noodles are baked in sweetened dairy-based cream sauce exist in different cuisines around the world, mainly Eastern European. And though the names by which this type of dish is called vary just as greatly as the cuisines of which it’s part, I simply call it, “delicious.” 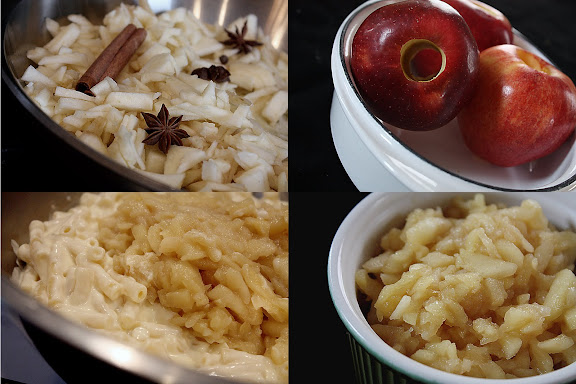 There are many different ways to make kugel. You could ask ten people to bring a pan of kugel, made according to their own family recipe, to a potluck and I’m willing to bet that there will be no two identical kugels among those ten. This also means there isn’t any consensus on what an ideal kugel is supposed to look and taste like even though, from my experience, people tend to use their childhood kugel as the one and only standard and their grandmother or mother as the sole arbiter of good kugel.

There are some rough guidelines, but in the end, just as beauty is in the eye of the beholder, deliciousness is in the mouth of the eater. 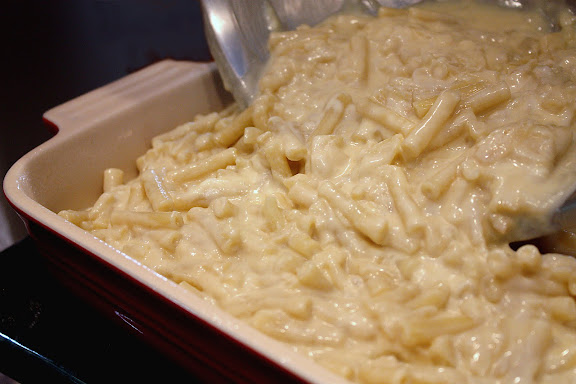 After having sampled innumerable kugels, I’ve found that the ones I like the most are not overly sweet and contain one or two salty elements. I adore the savory-sweet flavor combination. When the Wisconsin Milk Marketing Board contacted me to come up with a mac ‘n cheese recipe showcasing the deliciousness of Wisconsin-made cheeses, I agonized over what to make for, like, 3 seconds before the conclusion was reached.

Our mac ‘n cheese recipe is inspired by the coconut caramelized apples with 5-spice powder which I made back in the fall. The recipe has been greatly simplified so as to make this sweet mac ‘n cheese not too complicated. After all, the cheeses and noodles are the stars of the show; the spiced apple compote, as delicious as it is, is just the add-in. 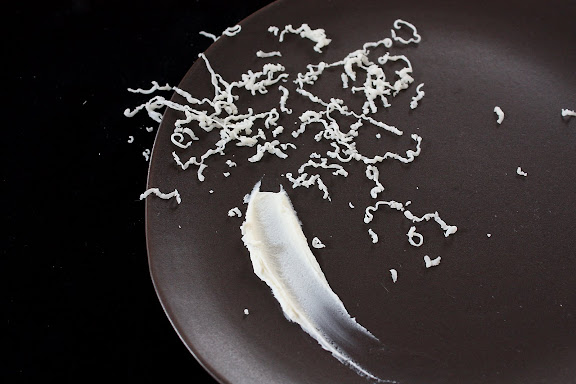 The mixture of Mascarpone cheese, sour cream, and eggs is used to mimic the traditional Béchamel. The spiced apple compote provides additional moisture and sweetness. Grated Fontiago© cheese goes on top to create that much-loved crust that everybody likes. It also provides a subtle savory element to the dish.

Have you had Fontiago cheese, by the way? I have only recently discovered this American-made cheese. The name probably clues you in as to what it tastes like: a combination of the Italian Fontina and Asiago. Fontiago combines the sharpness of Asiago and the mellow flavor of Fontina. The mildly “nutty” flavor of Fontiago balances out the sweetness of the sugar, the sweet-tangy apple compote, and the creaminess of Mascarpone and sour cream very well. 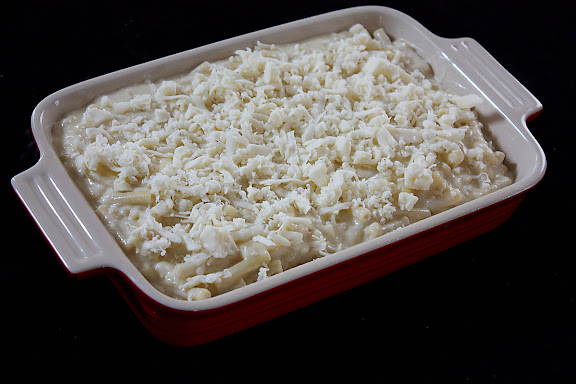 The result is a kugel-inspired macaroni and cheese that is warm, gooey, and cheesy right out of the oven. The flavor is only mildly sweet which is how I like it. The Fontiago cheese on the top melts like a dream and forms the cheesy “strings” that never fail to make kids and adults alike go, “Ooh.“**

Left to cool down a bit, or refrigerated, the baked noodles firm up and become more dense. You can cut a piece and pick it up to eat with your hand. I like it both ways. 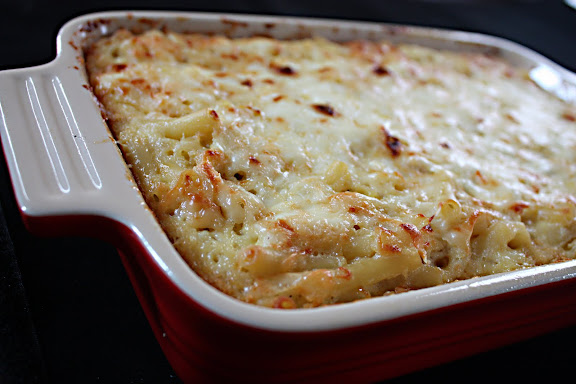