By Leela on February 10, 2010 in She Deglutenizes, She Veges 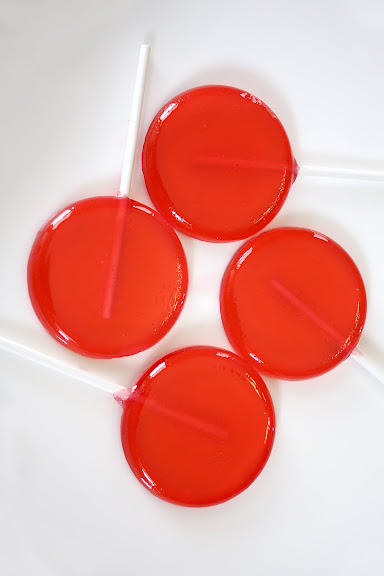 Rumor has been going around that I am the Grinch who destroyed Valentine’s. I don’t know how it got started. Sure, I might have said something that seems to suggest that I hate Valentine’s. The truth is, deep — really deep — down, despite the fact that I am the type that starts a new year with a requiem, I am quite a romantic. Please believe me.

Just not in ways that most people are used to is all. 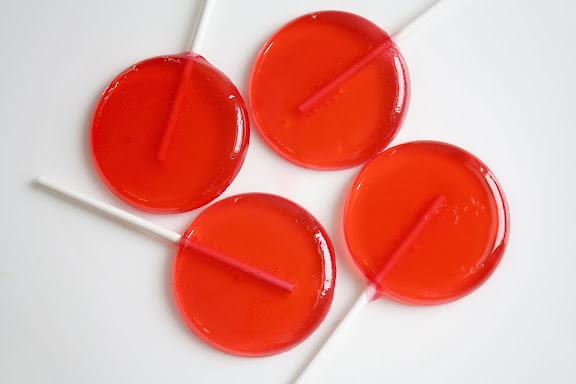 To prove it, I’ll tell you this: Ever since I published my first blog post on how to make lollipops, I’ve been making them over and over and over, sometimes for no other reason than that it makes me happy. Now, someone who makes these cute, colorful lollipops cannot possibly be the Grinch, can they?

So far my favorite color and flavor are red and cherry respectively. The reason, I believe, is self-evident. These things are bright red, 3.5 inches in diameter, glossy, sweet, fragrant of cherry, and — get this — its sole reason to exist is to melt in your mouth.

So for those who celebrate Valentine’s, won’t you make these for whomever it is that celebrates it along with you? The rest of us will watch from the sidelines. 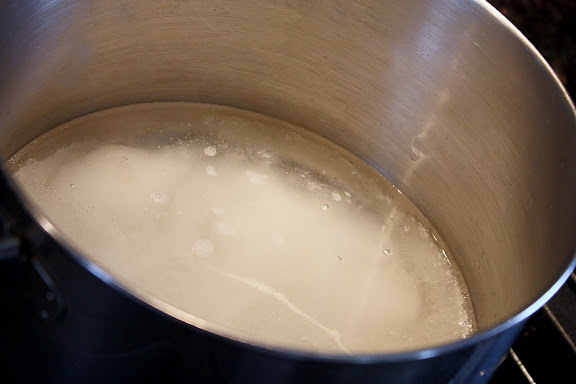 The recipe which I gave you last year works and works consistently. These past several months, I have tested and retested it.

Be sure to get a good, reliable candy thermometer and metal lollipop molds with grooves for the sticks. Make sure you don’t stir the molten sugar. Grease the mold with unflavored oil before you pour the lollipop mixture into it. Once the lollipops get unmolded, run them under warm tap water to wash off the grease, but do not blot them dry with a piece of cloth or paper towel as that will leave ugly lint on the surface.

Lastly, store the lollipops in clear plastic bags with decorative ribbons or what have you, but do not, under any circumstances, touch the surface lest your valentine witness your fingerprints on the otherwise beautiful lollipops. 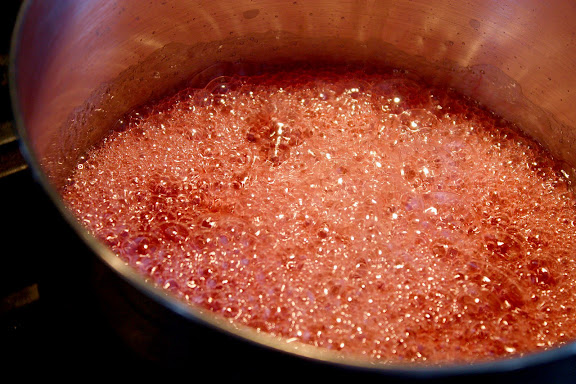 Other than that, it’s just a matter of keeping the sticks in the middle. The first 2-3 minutes after the hot sugar goes into the molds, you will have to babysit it a little. When the liquid is still very hot, it lacks the viscosity which helps hold the sticks in place. After 2-3 minutes, the liquid will start to harden a bit and that’s when the sticks will stay where you want them which is right in the middle. 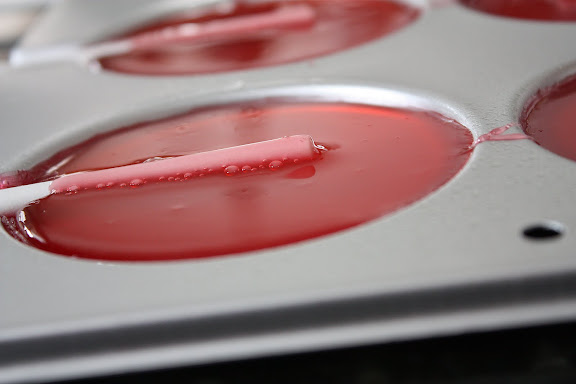 Make sure the tip of the stick is fully submerged; it shouldn’t stick out like that.
For this batch, I double the recipe in order to make six 3.5″ lollipops. The procedure is the same. The cooking is only slightly longer. I use red food coloring instead of green as shown in the original post. Lastly, I use cherry extract for baking which I’ve purchased online from a company whose namesake is a mythical figure who became king just because “some watery tart threw a sword” at him. 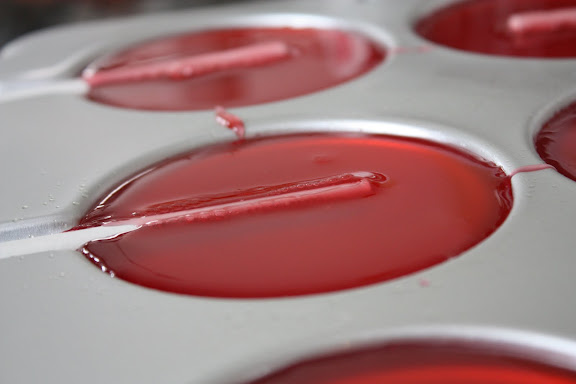 Additional notes would be that you shouldn’t worry so much if there are bubbles in your molten sugar. By the time the lollipops harden, the bubble problem will have somehow worked itself out. I wish I could explain it scientifically, but I can’t.