By Leela on April 11, 2010 in She Interviews, She Kneads, She Simmers, She Veges 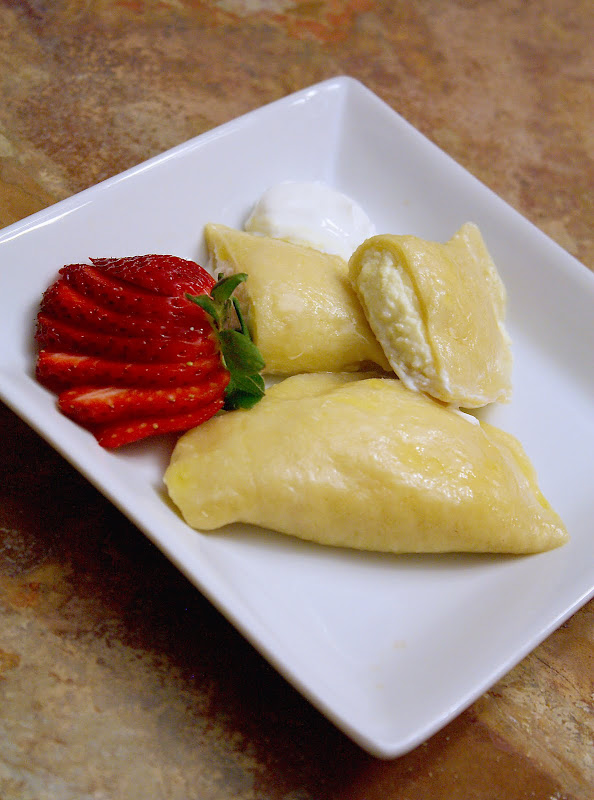 “The best” anything, I’ve noticed, often comes down to what one has grown up loving. When it comes to taste, calling something “good” is a highly individual thing and labeling something “best” is — I admit — laughably subjective. So in saying that this dough recipe produces the best vareniki [1] I’ve ever had, I assume you know I claim no objectivity.

You see, I don’t have a Russian/Ukrainian/Polish/Etc. grandmother (except an imaginary one), and so I didn’t grow up eating filled dumplings made in the various Eastern European traditions. This also means I was never one of those who walk the earth with a memory of their grandma’s infallible dumplings as the measuring rod against which every dumpling is evaluated either. You could say that, dumpling-wise, I was tabula rasa.

Then, a few years ago, somebody wrote on that previously blank slate.

In a small Ukrainian city, lying sleepily at the bank of the Dnieper, I had the privilege of being served a plate of homemade Vareniki s Syrom (Вареники с Сыром), boiled Ukrainian dumplings with soft farmer’s cheese filling. As part of lunch, hundreds of warm dumplings, simply adorned with a huge glob of Russian-style sour cream, smetana (сметана), [2] was brought out to us from a kitchen manned by Baba, a kind and kinetic Ukrainian grandmother whose tiny 90-lb body packs at least 500 lbs’ worth of energy.

After that meal, the Eastern European-style dumplings I’d had before became mediocre and the ones I had yet to have became irrelevant.

What makes these vareniki special? The dough.

Of course, the fillings matter. In the days that followed, Baba also made her famous vareniki with potato and sour cabbage fillings topped with crispy bits of salo and fried onions, etc., all of which were very delicious. But really, it is the dough that sets her vareniki apart from everything I’d had before. It’s tender, yet with just the right amount of chewiness. And what I mean by “the right amount of chewiness” is that anything more tender than that would be too limp and soggy, and anything more chewy than that would be too tough. 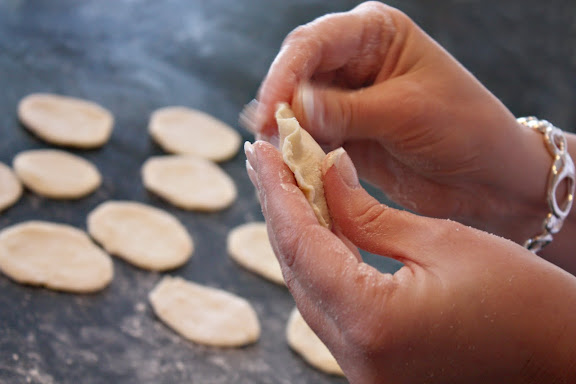 After that trip to Ukraine, I made Google search for me the best vareniki/pierogi dough recipes out there. I experimented with several. And while 3-4 were really good, none came close to Baba’s, in my opinion.

Long story short, I’d later found out that Valya, Baba’s only child, had mastered how to make Baba’s vareniki dough. My friends, her two daughters, have also been trained to make vareniki in the exact same way Baba has done for decades. These women make vareniki following the same protocol and it seems nobody has ever dared to mess with Baba’s recipe. (Why would they?) I still remember letting out a chuckle when Valya and her younger daughter were in the kitchen one time showing me how to boil vareniki. “Boil them for one minute. One full minute. One minute only!,” they said in unison.

That was so cute and funny at the same time. 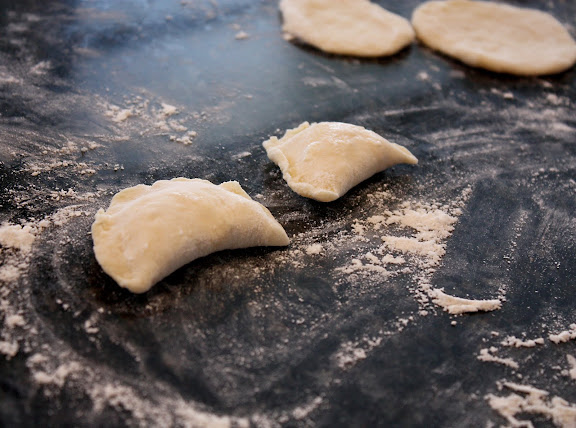 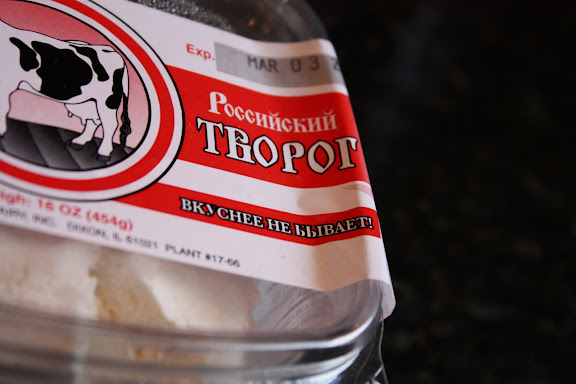 And now you’re wondering what the secret to Baba’s tender-yet-chewy dough is. Kefir. That’s what.

But, you see, to Baba and her offspring, it’s really not a secret; it is the only way to make vareniki to them. And if you ever make an exclamation upon learning this secret (while your mind conjures up the previously failed attempts at making decent vareniki), “Ah, kefir! I never thought of that!” like I did to them, they would probably give you the isn’t-that-how-everyone-else-makes-vareniki? deadpan look like they did me. 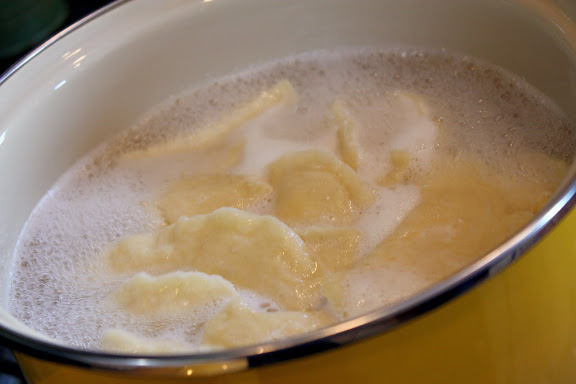 Boil the vareniki for one full minute and one minute only!
This makes perfect sense. The 3-4 recipes that I’d experimented with before all call for lactic acid in the form of either yogurt or sour cream. The results from these recipes were superior to the rest. And had Valya not shown me the way, I would have lived comfortably with those recipes. They’re good enough.

But since Baba’s dough is the best, I got down on my knees and begged Valya for this recipe. I didn’t even have to try that hard for she graciously obliged.

Print
Prep time
30 mins
Cook time
1 min
Total time
31 mins
Author: shesimmers.com
Cuisine: Ukrainian
Serves: Makes 20
Ingredients
Instructions
Notes
1. For the farmer’s cheese, look for tvorog or Russian-style farmer’s cheese which is firmer than other types of farmer’s cheese on the market; otherwise use regular farmer’s cheese or well-drained ricotta, fluffed with a fork. 2. The egg is necessary only if you use tvarog. But if you can’t find tvorog, there’s no need to add the egg for your farmer’s or ricotta cheese is already soft enough to use as is as the filling.
Wordpress Recipe Plugin by EasyRecipe
3.2.1230
[1] Vareniki (вареники) is the plural form of varenik (вареник). While the localization — in this case, Anglicization — of foreign words is something natural (linguistically speaking) and cannot be stopped, I still feel weird saying “varenikis”.” It’s like saying, “My childrens caught a few mices today and fed them to the geeses.” Other already-plural foreign words such as this include, though are by no means limited to, seraphim, cherubim, pizzelle, pierogi, and panini.

[2] Which tastes more like crème fraîche than American sour cream to me.

Thai Mortar and Pestle: How to Choose and Use Them
Khao Chae – Rice in Jasmine-Scented Iced Water and Savory Accompaniments