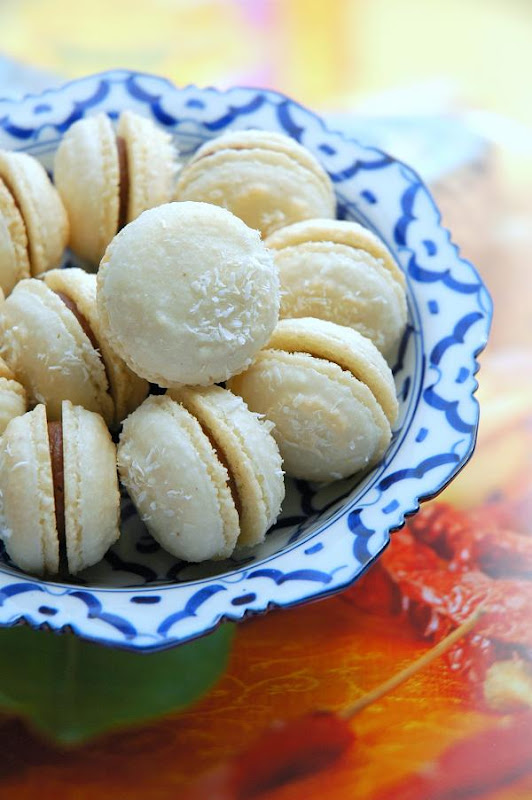 I’m starting a new series in which some of my favorite food bloggers are assigned to come up with a dish that encapsulates the flavors of the Tom Yam herbal “trinity,” namely lemongrass, galangal, and kaffir lime. The fun is in seeing how these talented guest bloggers incorporate the flavors of these three herbs, heavily used in the Thai cuisine, into various dishes both savory and sweet.

To kick off the series, I’m presenting to you the talented and beautiful Pastry Chef Thip of Bonbini! whom I have affectionately dubbed “the Queen of Macarons.” Thip, not only a fellow food blogger but also a fellow Thai, is a San Francisco-based pastry chef and baking instructor who has spent the past several years honing pastry skills in both culinary school and on the job. Thip has recently returned from a trip to Europe where she traveled to different places learning both new and age-old tips and tricks related to pastry in general and French macarons in particular. You can find information on the classes on how to master the art of macaron making which Thip is currently offering here.

When I first came up with the idea for this Tom Yam Series, interestingly enough, the first food item that crossed my mind was macarons and the first person that I thought of was Thip since I’m not much of a macaron maker. If anyone would be able to pull off something as unprecedented as Tom Yam macarons, it would be the Queen of Macarons herself. I am so honored to have Chef Thip here sharing with you her creation that boasts the bold flavors of our mutual friends: the Tom Yam herbs.

This is going to be a fun post to write because I was invited to be the first guest in a series posts on She Simmers. Our conversation started with the host’s idea. She wanted to invite friends to create and post a dish, or preferably dessert, that contains the Tom Yam herbs: lemongrass, kaffir lime leaves, and galangal. Like she said, “interestingly enough,” and I was down with the idea right away!

We agreed that I should make Tom Yam macarons. I told her I needed 2-3 days to experiment with the flavor combination before I decided to pick the right one. I’ve used savory flavors in my macarons before, but I’ve never thought about Tom Yam. Personally, I like to make sweet and savory flavored macarons more than sweet and sweet. The macaron shells already contain a lot of sugar, so a savory or salty filling balances out the flavor.

So my idea was to make the coconut shells with Tom Yam ganache.

I started with the shells by adding some dried coconut into the dry ingredients. I also added coconut extract into egg whites to make sure the flavor would pop up. For the ganache, I used two different chocolates, dark and milk, with fresh herb-infused cream. I didn’t like the outcome, so I did another one with tom yam paste. Voila!

It was a perfect combination of sweet and savory, and much to my surprise, really carried the flavor of Tom Yam. The shells were sweet with a taste of coconut and the filling added some sweet, sour, salty and spicy taste. I wish I could give everyone a sample.

Ingredients:
For the shells: