By Leela on May 16, 2010 in She Deglutenizes, She Drizzles and Smears, She Jams and Pickles, She Tosses, She Veges 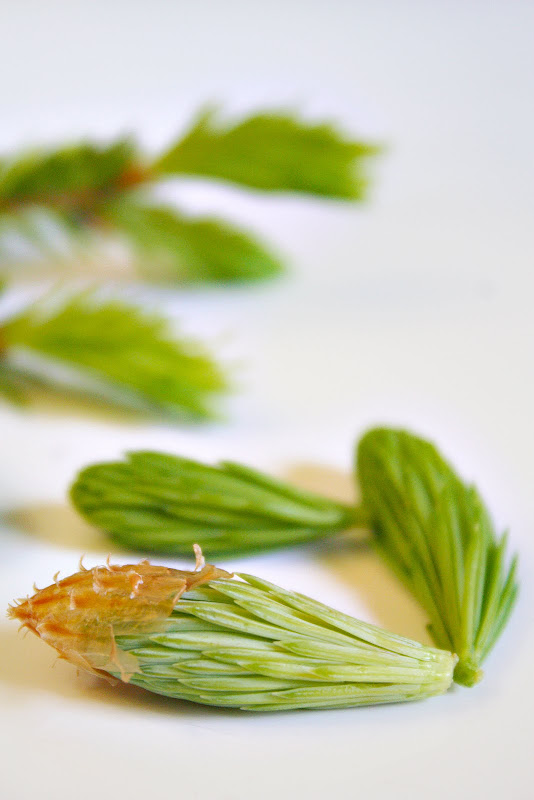 Several weeks ago, I took on the challenge of replicating a dish, the Golden Trout, created by Chef Curtis Duffy of Avenues restaurant in Chicago. Though I didn’t fail miserably (as I ended up with a dish that tasted quite good), I didn’t quite succeed (it was a far cry from the real thing). But that project exposed me to a few culinary things that I’d never known of before. One of them is spruce-infused oil. Let my ignorance be known: I never knew of such a thing.

Growing up in the tropical climate, there was nary a spruce tree in my neighborhood. Once in a while, I found myself in the midst of pine and fir trees while vacationing with my family in the northern or northeastern mountainous areas of the country where the climate is cooler. But even then, I doubt anyone of us would think of young pine needles as edible let alone delicious. 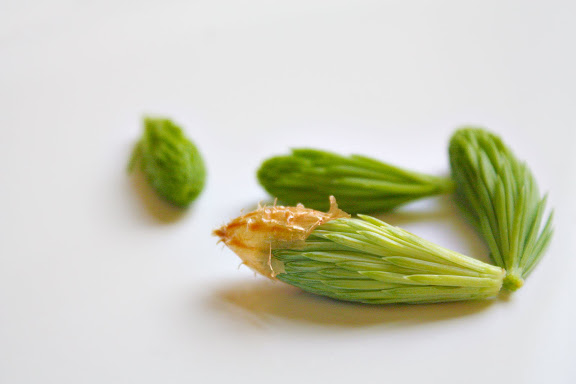 For his Golden Trout dish Chef Duffy, seared the trout in grapeseed oil which had been infused with spruce tips, and served it with spruce-flavored pudding and spruce-flavored meringue among other elements. While the trout is the soprano prima donna, it’s undeniable that the presence of spruce touches everyone else in the entire ensemble. The pine-y smell is not supposed to overwhelm, but tease. It’s that refreshing je ne sais quoi in the background that makes everything more special without making it obvious as to why.

Weeks later, the moment I saw new spruce tips emerge from their papery casings, I grabbed them by a bucketful. Depending on where you live, you see this happen at different times. It could be anywhere from early spring to late spring. For sure, though, wait any longer into the summer and the young, tender, fragrant tips will become tough, resinous, and not appropriate to be used in this manner any more.

Inspired by the many spruce-themed creations on this blog and my blogger friends, Don and Jenn, at foodieprints, I set out to experiment with spruce tips. 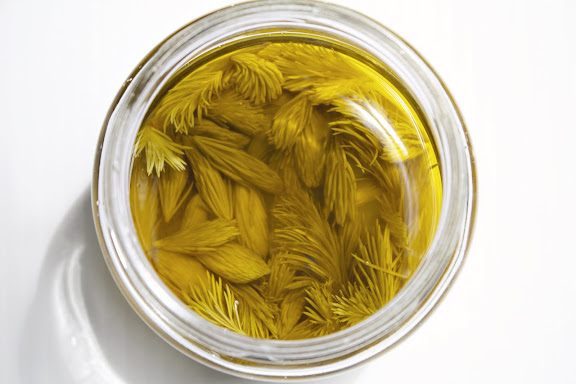 One of the most versatile things that you can make with spruce (pine, fir) tips is spruce-infused oil. For this batch, I warmed up 32 fluid ounces (4 cups/1 quart) of the best olive oil just until it reached 130°-140° F. Then I poured the warm oil into a jar in which I put 2 cups of spruce tips which had had their papery casing removed, been cleaned and thoroughly dried. I closed the jar and kept it in the refrigerator for two weeks. The result is delicious infused olive oil that makes a very fragrant vinaigrette.

Do you have any spruce or fir or pine tips emerging in your backyard? You may want to grab some and make this infused oil or spike your favorite cookies, cakes, breads, mayonnaise, etc., with them.

And hurry. They don’t last long.

10 Responses to How to Make Spruce Tip-Infused Olive Oil