By Leela on June 22, 2010 in She Deglutenizes, She Thais, She Tosses, She Uncooks, She Veges 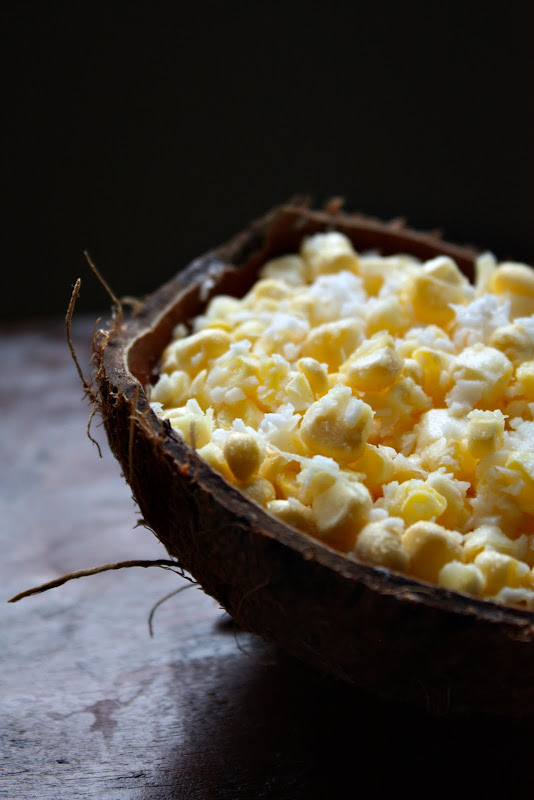 As we drove by a large, bare field outside of Chicago, my mother’s gaze transfixed on the little green plants that had barely emerged from the ground. She had just arrived on her last visit to the US. It was early May and, of course, there were no signs that summer would come to Chicago any time soon.

“What are those?” she asked. “Corn, Mom,” I said, adding that at harvest time they would set up a stand here where I would come and buy an ungodly amount of corn. A city girl through and through, my mother found the idea of buying fresh corn right from the source just about as exotic as cruising down the Amazon. “When is it going to be ripe for harvest?” Mom’s face lit up. “August,” I told her.

Silence ensued. Suddenly, I could feel a vague sense of gloom fill the car. And I didn’t understand why. 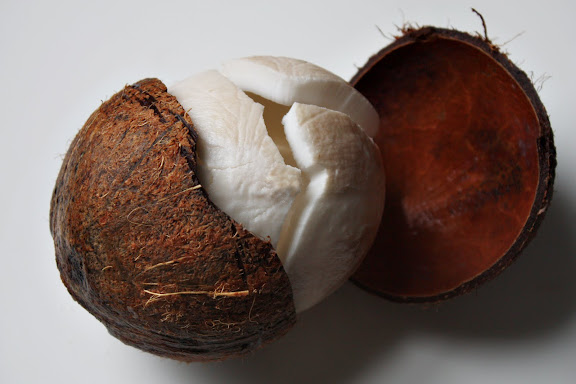 Fresh corn is usually not eaten raw in Thailand, or anywhere for that matter. There are those, like me, who like to eat their corn raw. But from the way it looks, we seem to be in the minority. I adore raw corn and not just because I occasionally put myself on a raw vegan diet for a week at a time as a way to detox. I find uncooked corn to be fresher, sweeter, and “fruitier” than its cooked counterpart.

I told my mother that during her stay I would make her the raw version of our family favorite, Khao Pod Khluk (ข้าวโพดคลุก), and that she would, like I had, come to like it much better than the traditional one. Khao Pod Kluk is a down-home, comforting snack-cum-dessert made of kernels of boiled corn tossed (“khluk”) with grated coconut, some sugar, and a little bit of salt. As my grandmother explained it, this was a way of “dressing up” the otherwise bland and starchy corn which was all we had until the supersweet variety (genetically engineered by a University of Illinois at Urbana-Champaign scientist) became widely available in Thailand in the late 70s.

Sweet corn-coconut salad makes for a very simple, yet filling snack with the starch and fiber of the corn and the natural fat from the coconut. This is not the kind of dish you would find at a food court of a posh mall in Bangkok due to its lack of sophistication; it’s the stuff you buy off mobile street vendors or make yourself. Khao Pod Khluk is down home and comforting. You definitely want to eat it either alone or in the presence of those who can clearly see pieces of corn stuck between your front teeth, yet love you just the same.

My whole family loves it to death. My corn-loving mom, especially, couldn’t have enough of it.

That summer in Chicago, every time Mom and I drove by that corn field, we would see how tall the corn was getting each week. What looked like a sparse field with tiny unidentifiable plants in May quickly became a lush, green field of unmistakably corn by mid-June. I would alert my mother’s attention to the growing corn and chirp with excitement, “I can’t wait for the corn harvest!” Sure, I could always buy corn from the grocery store, but summer wouldn’t be summer unless you could sink your teeth into just-picked corn and taste that milky sweetness which nothing but corn can produce.

Most of the time, Mom would either ignore me in my fit of corn-induced giddiness or, she would simply look away or change the subject. Then came one day when she made the oddest comment, “The corn is growing so fast it makes me sad.”

‘What does she have against corn?’ I wondered to myself. Why would my mother — or anyone — want to stunt the growth of innocent corn? 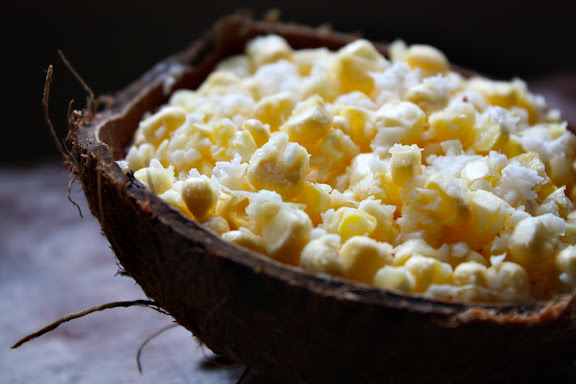 Corn coconut dessert salad Thai-style is so easy to make it doesn’t warrant a recipe. If you like your corn cooked, you can follow the traditional version by cutting the kernels off corn cobs which have been boiled and completely cooled, and tossing them with mature coconut meat grated finely or into long, thin strands. My favorite corn:coconut ratio is 4:1. Then you add just enough sugar to achieve the level of sweetness you desire. A tiny pinch of salt should also be thrown in just to round out the flavor. After a quick toss, the sweet corn salad is ready.

This snack tastes best when freshly prepared. It doesn’t keep long at room temperature, especially when the weather is warm. Kept refrigerated in an airtight container, it can stay fresh for 24 hours.

For my raw vegan version, I use raw corn, grated raw mature coconut meat, raw agave nectar, and a few flakes of sea salt. Detox or not, I prefer my Thai corn-coconut salad made this way anyway. I like the raw version so much better than the traditional one that it’s the only way I prepare this favorite snack now. The only caveat is that since the raw corn is juicier than cooked corn, you want to make sure that your corn kernels stay as dry as possible to avoid soggy salad.

The most effective way to achieve that is to get the kernels off the cob in one go with the blade of a very, very sharp knife positioned right at the base of the corn kernels. You don’t want to “milk” the corn by running the dull side of the blade back and forth on the cob as you would when making creamed corn. You want clean, unbruised kernels, with as much juice as possible being contained by the fibrous walls instead of bleeding all over the place.

Throw in the grated coconut and season it with raw agave nectar to taste and a tiny pinch of sea salt. Serve immediately. 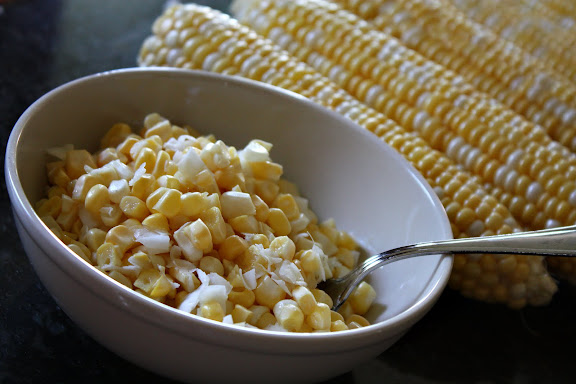 Just before Mom left, I had a chance to get the fresh corn and prepare my raw, vegan version of Khao Pod Khluk for her. Mom who had been apprehensive about eating raw corn loved it so much that she became a raw corn evangelist upon returning home to Bangkok.

On the eve of her departure from Chicago, the two of us stood around the kitchen island attacking the raw corn-coconut salad right out of the mixing bowl with two spoons. I finally asked Mom why she wished the corn would not grow so fast. “Oh, that,” She burst out laughing as if I had caught her in a moment of silliness. “It was because I knew that when the corn harvest came in August, it would be time for me to return home and it made me sad.”

Mom passed away less than two years later. That was her last trip to Chicago. We never again had another bowl of corn-coconut salad together.

*If you have a coconut grater, there’s no need to shell the coconut; you just need to crack it open into two halves and just go at it. However, if you don’t have a coconut grater, you will need to remove the meat from a mature coconut, break it up into smaller pieces, and process it in a food processor until the coconut meat turns into tiny flakes. The coconut flakes can be used as is and what is left can be stored in the freezer for up to a month. Coconut flakes thaw easily and retain their texture very well. Mature coconuts are available in most ethnic stores and many mainstream grocery stores. They come husked and sometimes semi-cracked.

To shell a mature coconut, hold the coconut in your non-dominant hand and, with the other hand, bang the biggest knife in the kitchen around the “equator line” of the coconut without actually splitting the whole thing. You just want to loosen the meat from the shell and create a line right in the middle where the shell will split. Then in the manner of an overenthusiastic footballer who has just scored a touchdown, you throw the coconut with all your might against a cement floor (outside where you can afford to make a mess). Opening a coconut this way is the easiest way to separate the coconut meat from the shell. You can then proceed to break the meat up into small pieces and turn them into tiny flakes in the food processor.