By Leela on September 15, 2010 in She Deglutenizes, She Rants and Muses, She Thais, She Tosses, She Uncooks 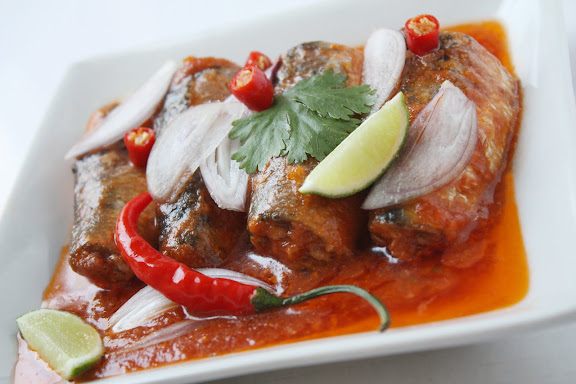 I drafted a short post on canned sardines in tomato sauce (ปลากระป๋อง) earlier this year during the time when the city of Bangkok went through one of the most heart-wrenching turmoils in her 228 years. Then I decided against it and, instead, wrote a different post to dedicate to the country and people that I love. This sad little post had since then been sitting in my draft folder, pouting, seething, … forgotten.

I can’t even fully recall why I chose to blog about canned sardines. Perhaps it had something to do with the the state of emergency being declared in Bangkok during that time and how my friends and family over there wiped the shelves of their neighborhood 7-11 stores clean in preparation for a Y2K-sized catastrophe. I don’t know.

Then last night, I sent out a random tweet casually mentioning that canned sardines in tomato sauce could be doctored up and turned into a pretty amazing sandwich filling. (Without the 140-character constraint, I would have also mentioned that the doctored-up canned sardines could also be be made into a kap khao (literally “[something to eat] with rice”) too. Next thing I knew, 15 direct messages and 4 emails came in within 15 minutes, asking me for more information on this spicy canned sardine sandwich filling. And who am I to say no?

Canned sardines in tomato sauce are an Asian, especially Southeast Asian, favorite, judging from its ubiquitous presence in Southeast Asian grocery stores in the US. Having seen it in Hispanic food aisle, I’m thinking it’s well liked in that part of the world too.

We love it in Thailand; that’s for sure. One of the most recognizable Thai brands would be Pum-Pui/Smiling Fish brand (ปลากระป๋องปุ้มปุ้ย) featuring on its logo a smiling fish, emitting its trademarked three droplets of drool. It’s been around since I was a kid.

Growing up, canned sardines in tomato sauce — both regular and spicy varieties — were the only kind of canned sardines I ever ate. (By the time the Italian sarde salate or French-style sardines à l’huile came along, my heart had already been taken.) Most of the time, we would pour the content of a can into a bowl, heat it up very gently and very briefly, add to it some thinly-sliced fresh bird’s eye chillies and shallots, season it to taste with fresh lime juice and fish sauce, and sprinkle some fresh cilantro leaves on top, if we had any on hand. With just a quick toss, you’d get a very flavorful dish to eat with a plate of warm jasmine rice or plain rice porridge on those perplexing days when the fridge was full but nothing looked appetizing.

The same spicy salad, fluffed into flakes with a fork, also makes a pretty good sandwich filling, especially when paired with a crusty bread like ciabatta. Hard to believe, I know. But it’s true.

My grandmother would also make a tom yam of canned sardines in tomato sauce. She would pour the content of a can into a small pot and add in just enough water or broth to barely cover the fish along with a bruised-up piece of lemongrass stalk, a couple of kaffir lime leaves, and a few slices of fresh galangal. Fish sauce and fresh lime juice, of course, would be used to season it to taste. She liked to spice it up with dried red pepper flakes. Not a ritzy dish by any means, obviously. But there are times in your life when nothing, nothing, except a big ladle of piping hot canned sardine tom yam poured over a mound of rice would cut it.

How do you prepare your canned sardines?