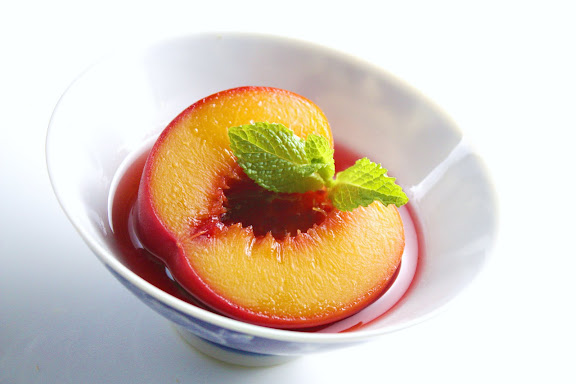 Recipe Remixes are easy (and kind of fun) to write; all I have to do is load the photos onto the site, write a short paragraph to go with each, and link it to the pertinent archived post(s). Then again, it’s also these recipe remixes that take the longest time to produce. Each post comprises dishes made, photographed, and documented over a long span of time.

So for those who have been asking for Recipe Remixes Vol. III after Vol. I and Vol. II had made their appearances, your favorite series is back by popular demand. 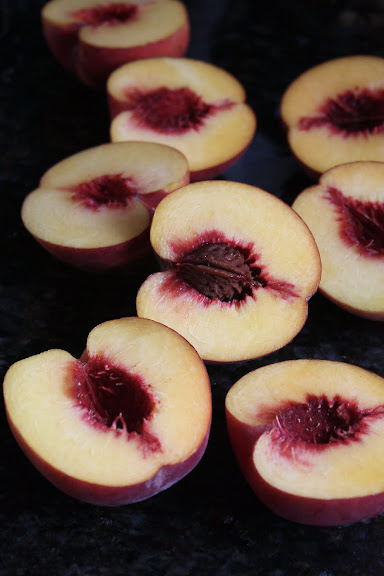 We’re beginning with spiced poached peaches. The featured image at the top of the post shows a piece of peach which has been poached in the liquid left over from pickled cherries. Last time I made those delicious pickled cherries, I served them with assorted cheeses and reserved the crimson red pickling liquid, fragrant of cinnamon and other spices, to poach some peaches in. It worked so beautifully.

If you’re ever stuck with under-ripe and not-so-flavorful peaches, this might be something you want to make with them. If you feel like making pickled cherries first, then do what I’ve described above, i.e. reserve the pickling liquid to poach the peaches in. But I’d hate to have you make one recipe solely in order to get its byproduct, so if you don’t want to start with pickled cherries, you can. Just make the pickling liquid as described in the post on pickled cherries with 1/2 cup more sugar, then poach some halved under-ripe peaches in the liquid. There’s no need to reduce the liquid first.

Keep the liquid on simmer while poaching, and take the pot off the heat only when a knife pierces through the peaches easily. Let the peaches cool along with the liquid. Reserve the poached peaches, strain out the liquid and reduce it to desired consistency to use as sauce; serve the peaches and the sauce with whipped cream or ice cream. 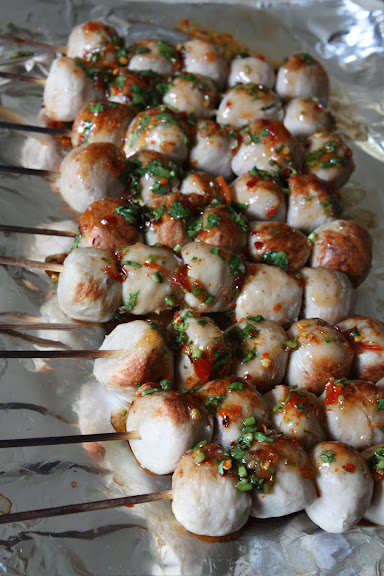 One of the most common street foods in Thailand is grilled skewered meatballs, Luk Ching Ping (ลูกชิ้นปิ้ง). Nothing fancy, as you can see; just store-bought Asian-style meatballs threaded onto bamboo skewers and grilled until the outsides are slightly charred and blistered. The meatballs then get a quick dip in a sweet, spicy sauce.

You eat these hot off the grill, standing with your feet apart and your torso bent slightly forward. Let the sauce drip on the floor if it wants to — and it will — and don’t worry about your cheeks getting all messy as you pull each meatball off the skewer side-way with your teeth. This is street food, after all.

The batch shown in the photo above was made in the most pathetic manner possible. Because it was in the dead of winter, I lined up the skewered beef balls (they’re sold vacuum-packed and frozen) on a foil-lined baking sheet and broiled them. The dipping sauce is a 1:1 concoction of homemade Thai sweet chilli sauce and dried chilli dipping sauce (Jaew) that was made without toasted rice powder. 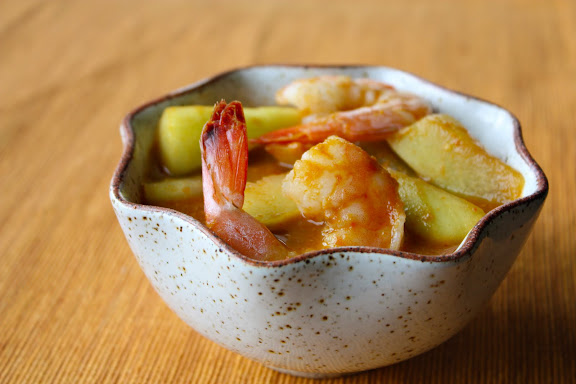 Watermelon rinds abound in the summer, and my favorite way of preparing them is watermelon rind Thai sour curry (Kaeng Som). Having ready-made Kaeng Som broth in the freezer means that whenever you find yourself with some watermelon rinds, or any vegetable scraps, you can put together this delicious, albeit lesser-known, Thai curry in no time. If you have some shrimp, throw them into the pot; if not, there’s no need to do so as the broth already comes with fish meat mixed in. 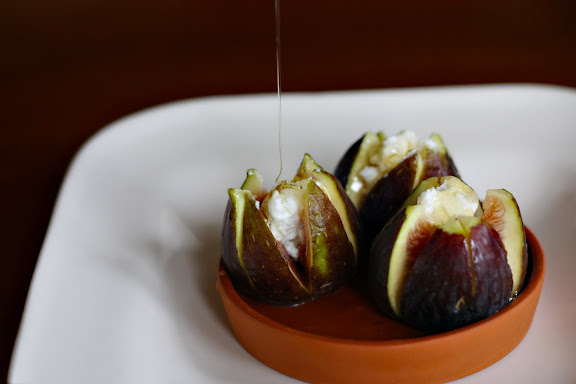 When fruits are at their peak, my opinion is that they should be eaten right out of hand. But when they’re out of season or not exactly at their best, sometimes a little help is needed. These honey-goat cheese baked figs are an example of what can be done to fruits that need help. And these figs definitely needed some help when they landed on my kitchen counter.

I snapped off the stems, sat these voluptuous figs on their rounded bottoms, made two cuts 3/4 of the way, spread the segments apart just a little, stuffed each of them with about half a tablespoon of softened homemade goat cheese, drizzled some honey on them, and baked them at 400 F briefly just until the figs were softened, the goat cheese developed slightly charred crusts, and the honey got baked into the cheese and the figs. 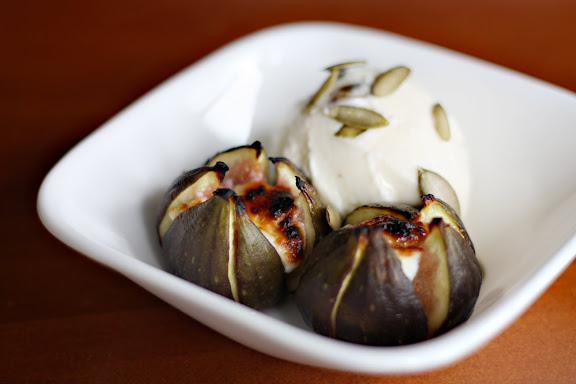 Then I served them warm with my aunt’s Thai-style coconut milk gelato. The toasted pumpkin seeds aren’t really necessary, but they sure taste nice. 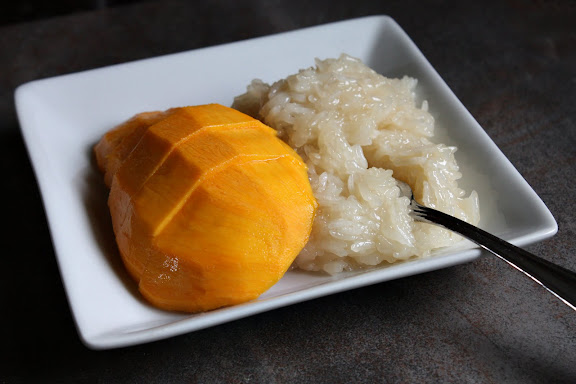 If I were to guess, Thai sweet coconut sticky rice (Khao Niao Mun ข้าวเหนียวมูน) — the kind that is eaten with ripe mangoes — could have started out having palm or coconut sugar as its sweetener. It makes sense given the fact that those two were, and still are, the natural, unrefined sweeteners closely associated with traditional Thai cuisine.

However, I have never seen or had commercial khao niao mun that is sweetened with anything else other than white sugar. So, speaking strictly from my own experience, this version of sweet sticky rice sweetened with palm sugar (just because I ran out of white sugar that day) is not at all common.

It’s delicious, though, and just as easy to make. All you have to do is replace the white sugar with 1.5 times as much palm sugar. There’s something about the caramel-like flavor of palm sugar that adds depth of flavor to the sticky rice. It’s so good I don’t even mind the fact that the end result is not the familiar off-white color. 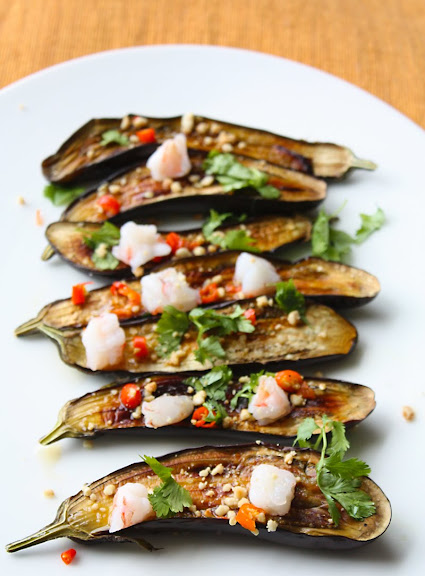 This baked eggplant salad is an example of the kind of Thai or Thai-inspired salad you can whip up very quickly and with minimal ingredients. So if you don’t have or like eggplants, replace them with — oh, I don’t know — jicama matchsticks? Thinly-sliced cucumbers? Grilled baby zucchini? Whatever looks good or is on sale at the market — whatever comes with your CSA basket, use it.

The core ingredient is the simple multi-purpose fish sauce-lime Thai dressing which I consider one of the most common composite ingredients extensively used in Thai cooking (read about some of them here). Instead of spending time learning the components of thousands of individual salads, by familiarizing yourself with the basic components which represent what all of these salads have in common, you’re saving yourself time.

I’ll blog more about this at a later time for there’s more to discuss. But for now, suffice it to say that if you know how to mix together one part fish sauce, one and a half parts lime juice, and fresh or dried chilies as appropriate as well as a bit of palm or white sugar, you know how to make — no exaggeration — hundreds of Yam variations.

I’ve explained how to make this particular salad here. 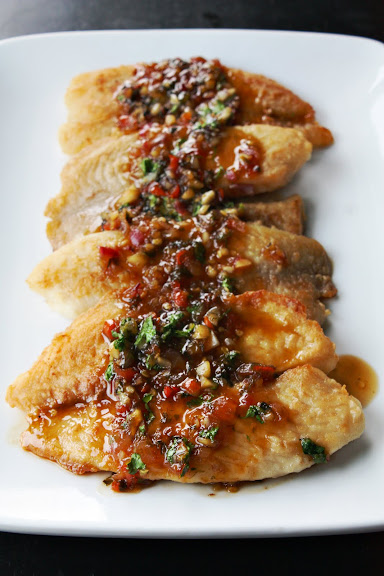 To reiterate the point made above, this is another example of the many, many things you can do with the much-loved (by me, at least) Thai three-flavored sauce (Sot Sam Rot ซ้อสสามรส) — another common composite ingredient which begets several dishes.

This is my favorite way of preparing tilapia. All you have to do is put some all-purpose or rice flour in a bowl, season it with some salt, and dust about two pounds’ worth of tilapia fillets with it. The flour-dusted fish fillets then go into a nonstick skillet, set over medium-high heat, with some vegetable oil in it. There’s no need to use a lot of oil as we’re not deep-frying the fish. Tilapia fillets aren’t that thick, and by the time you get a good sear on both sides, they’re cooked through. 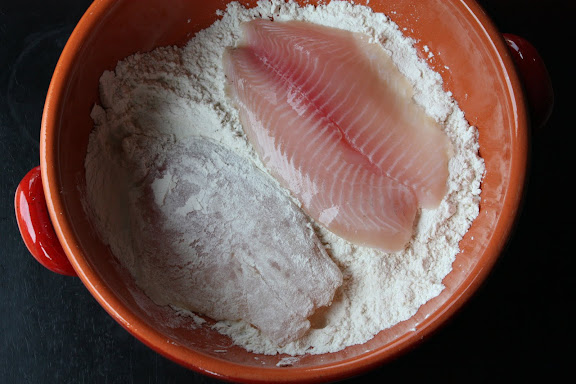 Arrange the golden brown fish fillets on a serving platter. Ladle one recipe of the sauce on top and serve this with warm steamed jasmine rice.

This dish is so delicious I’m not even going to try to describe to you how delicious it actually is. My words will fail anyway. 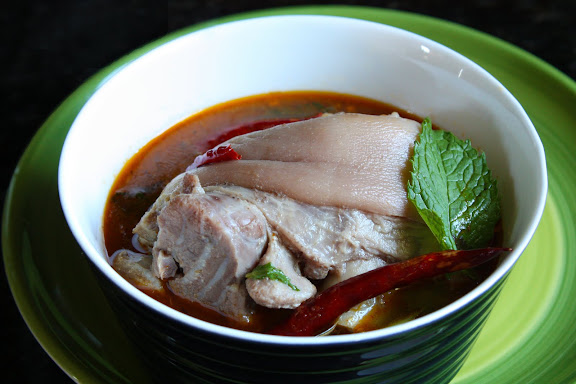 I prepared this pork hock Tom Yam exactly the way I usually do when bone-in, tough cuts of meat are used, i.e. long, slow simmer. The collagen-rich pork hocks impart so much flavor to the broth, and the result is Tom Yam that is more deeply flavorful than if you were to use tender, boneless cuts of meat.

There’s absolutely nothing wrong with people who prefer cute, bite-sized shrimp or chicken breasts in their Tom Yam; I’m just not one of them. I mean I’d tried, because — heaven knows — I don’t necessarily want to be known as the girl who picks up a ham hock or a piece of oxtail from her bowl of Tom Yam and gnaws on it.

It’s just that after having failed repeatedly, I gave up trying. Maybe you want to consider joining me? 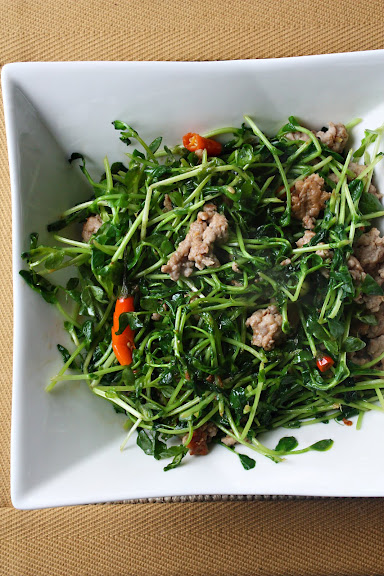 This is a variation of the famous stir-fried Chinese water morning glory (Pak Bung Fai Daeng ผักบุ้งไฟแดง). For this batch, I used pea sprouts in lieu of ong choy and sauteed about 1/4 pound of ground pork in the wok before adding the other ingredients. 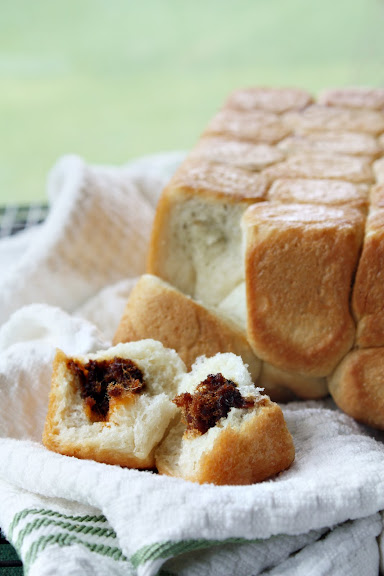 People have been inquiring about the pork floss buns which I’ve casually mentioned in my post on pineapple jam pinwheels. Well, here they are, albeit in a non-traditional monkey bread form.

Pork floss (Mu Yong หมูหยอง) and Thai chilli jam (Nam Prik Pao น้ำพริกเผา) buns have been a staple of Thai neighborhood bakeries for decades. The combination works; it just does.

For this loaf of pork floss-Nam Prik Pao monkey bread, I used the dough made according to my recipe for old-fashioned rolls, let the dough rise once, punched it down, separated it into 36 pieces, rolled each piece out into 3-inch disks, put a dollop of Nam Prik Pao in the middle followed by a tablespoon or two of commercial pork floss, sealed the buns very securely, gave each of them a quick dip in melted butter, and arranged them into a greased large loaf pan.

The buns were allowed to rise once more until they were doubled in size, then baked at 350 F until golden brown and cooked through (about 45-50 minutes). 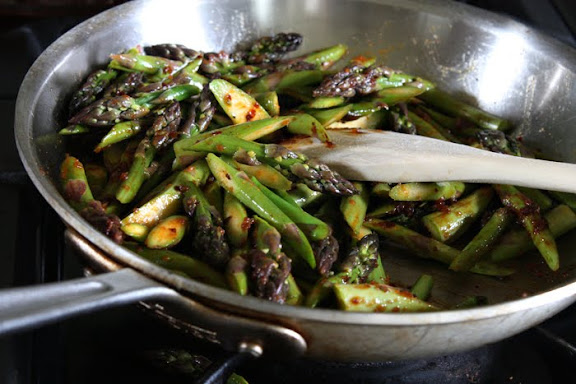 Speaking of the ever-so-versatile Nam Prik Pao, I would be remiss if I didn’t mention this quick vegetable stir-fry.

What you’re looking at is no more than a pound of fresh asparagus, cut diagonally into 1-inch pieces, stir-fried with nothing — nothing at all — but 1/4 cup of Nam Prik Pao. That’s the power of Thai chilli jam. It’s packed with so much flavor; the salty, sour, sweet, spicy components are all in there.

Imagine something else you like other than asparagus. Not everything goes with Nam Prik Pao, of course, but chances are whatever it is you’re thinking of right now, it will work.