By Leela on December 23, 2011 in She Bakes, She Explores, She Interviews, She Veges 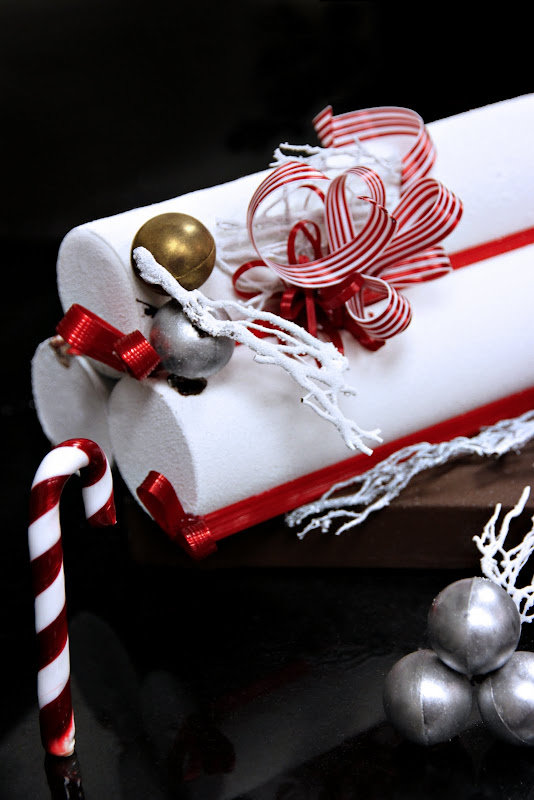 The day I met Pastry Chef Patrick Fahy, I was allowed to have much more fun than I deserved. We spent an afternoon making beet ice cream. He also let me wander around the kitchen playing with things I wasn’t supposed to, and answered many questions, including dumb ones. He even let me capture with my crummy point-n-shoot camera an impromptu demo on how to form an ice cream quenelle.

It’s been two years since then, and much has changed.

Back then, Fahy had just finished a year-long stint at The French Laundry in Yountville, California, and returned to his hometown of Chicago to head the pastry kitchen at Blackbird (with a large granite slab in tow — more on that later). What happened to him between that batch of beet ice cream and this bûche de noël currently gracing your screen?

Many desserts. Among them was the much-raved about sugar-blown cherries filled with cherry sorbet – his signature dessert of sorts. Then there was the Chicago Tribune Pastry Chef of the Year title in 2010 followed by the prestigious James Beard Award for Outstanding Pastry Chef nomination in 2011.

To my surprise – and, to be honest, delight – though much has changed, much still remains the same. It seems none of the success and recognition has gone to Fahy’s head. He still operates like an underdog, thinking there’s still so much to learn, so much to master, so much to overcome. How a person wades in the world where ego and hubris are all too common and manages to keep his focus so sharp and his humility so genuine boggles my mind. 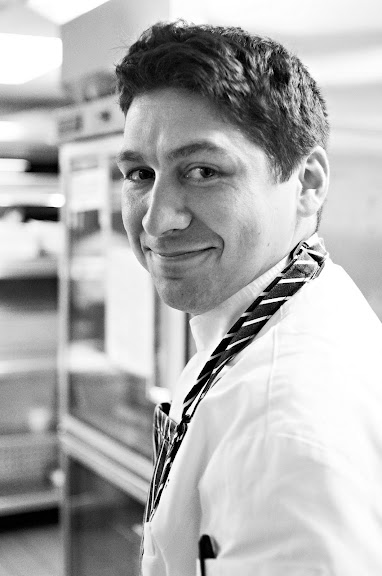 Photograph courtesy of Patrick Fahy
Try asking him to tell you what’s special about him as a pastry chef, and it’s unlikely you’d get an answer different from, “I work really hard,” “I put in a lot of hours,” or “I’ve learned a lot from making mistakes.” I asked him that question two years ago and got those answers accompanied by the that’s-all-I-can-honestly-say-to-you look; I asked the same question a couple of days ago and I still got the same response. Perhaps there is no secret formula; maybe hard work truly is the main force behind Fahy’s accomplishments.

The chef’s self-confessed obsession with sugar work started when he apprenticed at the Apicius International School of Hospitality in Florence, Italy, under the mentorship of award-winning pastry chef, Andrea Bianchini.

“I came back to the States wanting to continue my education in sugar work,” says Fahy. “But I was disappointed to find so few people to learn it from.”

That changed when Fahy enrolled at the French Pastry School in Chicago where instructors Jacquy Pfeiffer and Sebastien Canonne became an inspiration for him to pursue the mastery of sugar work more seriously.

“It was an eye-opener,” Fahy says of his experience at the school.

The under-equipped yet fiercely-determined young chef got himself a 200-odd-pound granite slab from a scrap yard and a heat lamp from a hardware store. He would be macgyvering his kitchen set-up with them.

When Fahy relocated to California, the stone obediently followed him. His bedroom was converted into a sugar room, complete with a dehumidifier to combat the Californian humidity, where he practiced sugar work incessantly when off-duty, videotaping himself kneading and pulling sugar. When an opportunity presented itself in the form of an essay contest to win a trip to Orlando, Florida, for a short course in sugar arts from the renowned Ewald Notter, Fahy jumped at the chance and won it. 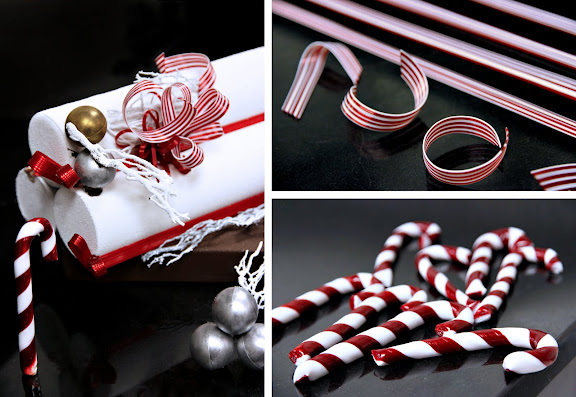 His interest in sugar work has become a full-blown obsession ever since. That huge slab of granite and the chef have also become inseparable; he had it placed in his kitchen at Blackbird.

The 32-year-old chef is now commanding the pastry kitchen at Café des Architectes at the Sofitel Chicago where he oversees all of the hotel’s pastry operations. That granite slab – in case you’re wondering – has also found a new home there where it serves not only practical purposes, e.g. as a surface on which all kinds of sugar works of art are created, but also as a lapidary reminder of the path that has led Fahy to where he is.

Ask him whether he considers it his “good luck granite,” and he’ll shyly chuckle. It’s clear from where I stand that with solid training, talent, and hard work on his side, Fahy has little need for luck.

For the holiday season, Chef Fahy has shared with you his recipes for the eggnog bûche de noël with chocolate mousse and butterscotch sauce and chocolate streusel.

The way the dessert is assembled and presented is perhaps impractical for most home bakers. Chef Fahy makes an ice cream-cake roll first, freezes it, then jams the frozen cylinder into a tube half-filled with chocolate mousse, then freezes it again. The result is a cylinder chocolate mousse-covered ice cream-cake roll which he sprays with cocoa butter and cuts into smaller pieces.


For those capable of and interested in following the chef’s method of assembly and plating, please watch the video. [I’ve also taped Chef Fahy showing you how to make pulled sugar ribbons and how to temper chocolate using the tablier method which you may find useful.]

However, I have a feeling that most people probably will not attempt that. I know I won’t. If that’s the case, alternatively you can make the sponge cake-ice cream roll beforehand, fill half a plastic-lined large loaf pan with some of the chocolate mousse, place the cake roll in the middle, bury it with more chocolate mousse, level off the surface, cover it with more plastic wrap, and freeze it.

Or you can treat the different components in this dessert ensemble as separate entities and use them in ways that suit your needs. 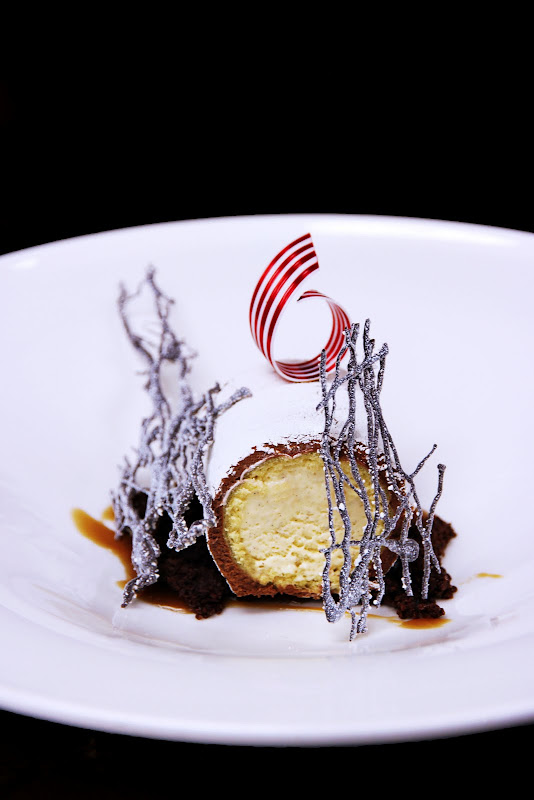 Blend everything in a food processor until the mixture comes together. Spread it thinly onto a parchment-lined sheet pan and bake at 350°F for 8 minutes until crispy and slightly dry on top. Allow to cool and break it up into a coarse meal.

Eggnog Ice Cream
(Yields about 3 quarts)
438g heavy cream
750g whole milk
250g granulated sugar
4g salt
30g nonfat milk powder
325g egg yolks
Half a vanilla bean
5g freshly grated nutmeg
50g dark rum (Meyer’s), optional
Gently heat the cream, milk, sugar, vanilla seeds (scraped off of the vanilla pod), and the vanilla pod in a large heavy-bottomed pot. Put the egg yolks in a large mixing bowl and place it close to the cream mixture. Quickly whisk in 3-4 ladles of the hot cream mixture into the egg yolk to bring the temperature of the yolks closer to that of the cream. Pour the tempered yolk mixture back into the cream pot and continue to heat, whisking occasionally, until the temperature falls between 70 °C (156 °F) and 85 °C (185 °F). Take the ice cream base off the heat and strain. Once that is done, add the milk powder, salt, nutmeg, and rum to the ice cream base and mix well. Then leave the mixture to cool in an ice bath. Churn the ice cream base in an ice cream maker according to manufacturer’s instructions. Freeze. 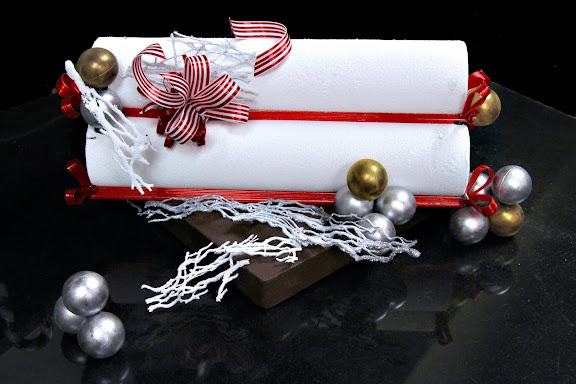 Vanilla Roulade
5 large eggs
90g sugar
43g bread flour
25g cornstarch
1/8 teaspoon vanilla extract
Beat the eggs and sugar over a bain marie until the mixture becomes viscous and increases about 5 times in volume. Beat in vanilla. Sift together bread flour and cornstarch and sift the flour mixture into the egg mixture in small increments. Carefully fold in the flour mixture so as not to deflate the egg mixture. Spread the mixture onto a parchment-lined half-sheet pan and bake in a 450°F for about 5 minutes until the top is golden brown. Cool and brush with some simple syrup (optional).

Chocolate Mousse
250g dark chocolate couverture, melted and kept warm
80g egg yolks
16 fluid ounces (473 mL) heavy cream
65g simple syrup (35g water and 35g sugar), boiling hot
Whip heavy cream until slightly thickened (the consistency should be similar to that of runny yogurt); set aside. Whip egg yolks with an electric mixer, carefully and slowly pouring the hot simple syrup down the side of the mixer bowl; continue to whip until the yolk mixture is frothy. Stir in the whipped cream and the melted chocolate.