What Is “Authentic” Thai Cuisine?

By Leela on September 18, 2012 in Uncategorized 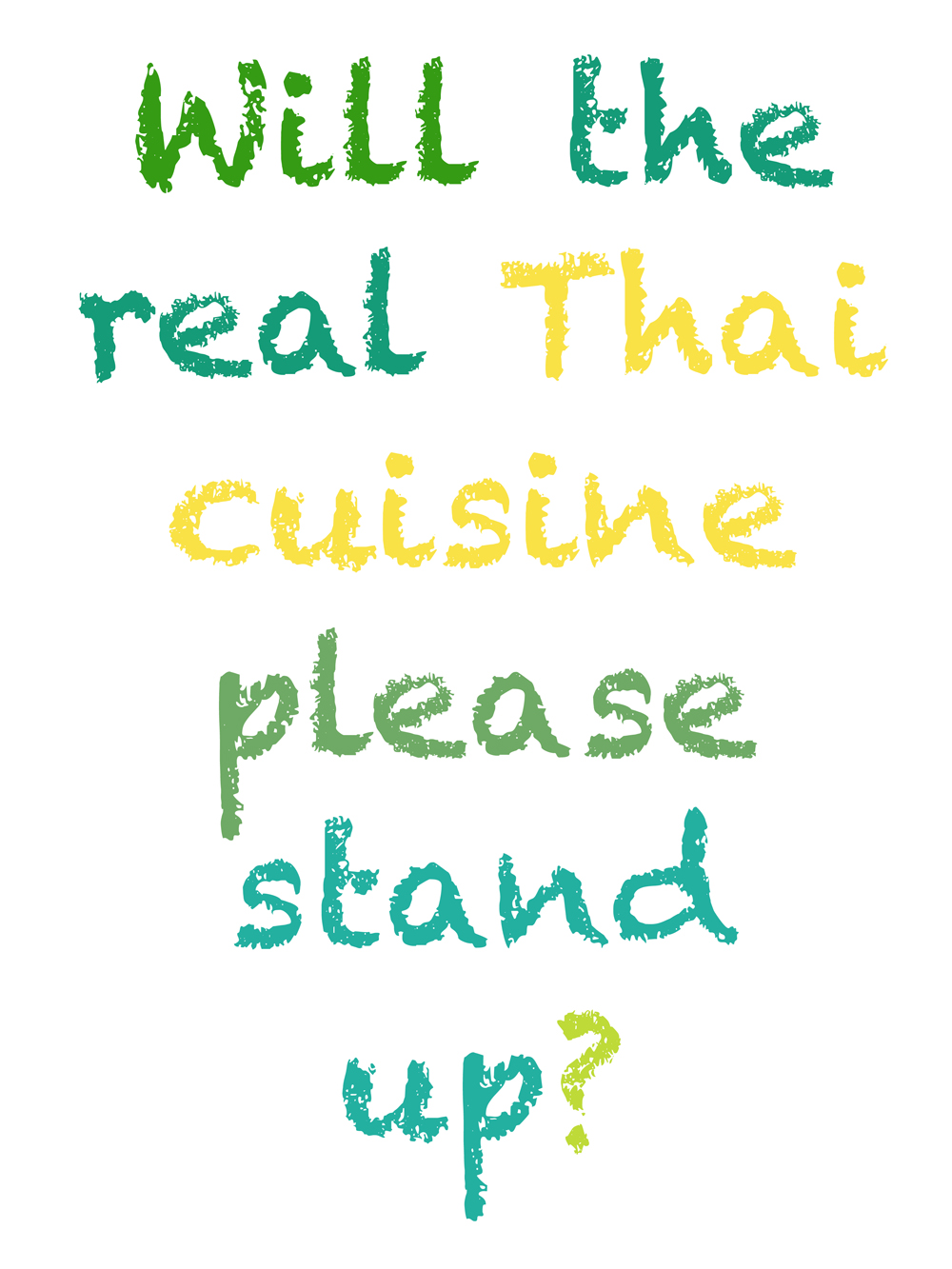 Before I begin, please allow me to make it absolutely clear that this is a separate issue from whether or not a restaurant can add bamboo shoots, potatoes, and carrots to Tom Kha Gai, whether Nam Prik Pao should be fried, or whether dairy is allowed in Tom Yam, etc. That is the issue of what can/should or cannot/should not be done to a dish and to what extent before the dish ceases to be recognizably what it’s generally perceived to be1, and I’ll write a post on it someday.

This post is about what represents “authentic Thai cuisine.”

And just so you don’t waste your time, let me state my position unequivocally at this point: I don’t know where I stand; I don’t even have an answer that satisfies me on a personal level. If you think that’s bad (or too post-modern), it gets worse: not only do I not have an answer, the more I think about it, the more questions I have.

So this could be a case of mental incontinence on my part. But since you’re still reading, I’m just going to let loose.

Based on my observation, some notions have been perpetuated. I cannot find ways to support any of them.

1. The so-called royal Thai cuisine is the true representation of authentic Thai cuisine.

This also includes recipes generated by aristocratic households. The subtle implication is that in preserving these old recipes, one is preserving the true essence, the top representation of Thai cuisine. Also implied is the notion that if you really want to create Thai food at its best, you need to recreate these recipes. This is because, Thai cuisine as we know it today has been corrupted and we need to remedy the situation by bringing back these obscure dishes.

Though you can’t really label this notion and its implications false, this view is, in my opinion, grossly narrow. The royal cuisine — if there’s truly such a separate class (M.L. Sirichalerm Svasti, better known as Chef McDang, does not believe so) — is only a minuscule part of Thai cuisine as a whole. It represents the experience of those in the palaces and aristocratic households which is not shared by the vast majority of the population. Those who espouse the notion of the royal Thai cuisine being truer, more refined, more worthy of exalting and preserving, and more definitive of what Thai cuisine is all about need to explain to us why Thai food as made and consumed by people outside that society is considered less authentic or, in fact, less anything.

In other words, I personally may find an exquisite fish salad served on pink lotus petals as served in an aristocratic household on the Rattanakosin Isle more palatable than a grilled river fish served with chili paste and rice cooked in a clay pot as served in rural Ratchaburi Province, but I cannot justify calling the former more Thai or authentic than the latter.

Each royal/aristocratic family also has its own tradition and unique recipes (which often employ novel ingredients). Which of these traditions is the true representation of the royal cuisine, let alone Thai cuisine as a whole? And could the reason we’re scrambling to revive, preserve, and promote these ancient, about-to-become-extinct dishes so that “kids these days” won’t be so clueless be precisely due to the fact that these exquisite, lofty, novel dishes never really entered the mainstream or were embraced by the general population to begin with?

2. Only recipes and dishes attested in searchable written records count as true representations of Thai cuisine; the rest is hearsay and to be dismissed.

While I’m somewhat neutral about the previous notion, I find this one annoying.

Anyone who deals with ancient documents can tell you: just because a document was written in antiquity does not mean it contains facts, all facts, and nothing but facts. Even something supposedly factual and straightforward as a king list from ancient Egypt could be commissioned/edited by those in power to make themselves look pious and their enemies either nonexistent or evil. Usurpers did that all the time, and those who rose to power after the usurpers also repeated the cycle. And it wasn’t that hard to manipulate facts, because in ancient times, what percentage of the general population could actually read? Even the stone masons who did the inscribing didn’t even know what words they were chiseling into a stone (if they had scribal skills, they wouldn’t have become stone masons).

Historians — good ones, anyway — know better than to reconstruct history based on the naïve notion that all written records represent what actually happened or that no facts can emerge outside of these written records. Access to historical records alone without the knowledge and insight on how to handle their contents is useless.

In the case of Thai culinary historical records, I have no reasons to believe there’s any falsehood involved. However, one needs to keep in mind that it was mostly the rich, powerful, and educated who could produce and popularize written records. And those records almost always reflect the lives they lived. Nothing wrong with that; we just have to recognize that as fact and remember that for every story that is written down, there are several untold stories that are just as legitimate and crucial in reconstructing the past.

In my previous post on salmon-coconut milk relish (Lon Pla Salmon หลนปลาแซลมอน), I alluded to a century-old recipe by one of Thailand’s first cookbook authors, Lady Plian Pasakornwong (ท่านผู้หญิงเปลี่ยน ภาสกรวงศ์), the wife of one of the top officials during the reign of King Rama V. This recipe, requiring imported canned salmon, was written by someone who belonged to the royal/aristocratic household, originally published in a newsletter that was clearly produced for the top echelon of the Thai society (you think the rural rice farmers back in those days who most likely didn’t have access to electricity would subscribe to a newsletter teaching you how to make apple charlotte2 or how to build a horse stable — including how to manage servants overseeing the horses — and a car garage3?)

There’s nothing wrong with Lady Plian’s recipes, her choice of ingredients, or the contents of her newsletters/books. I’m just using her work as an example of a piece of culinary literature that reflects the lifestyle of the elite. While Lady Plian’s recipes were recorded and circulated, there were millions of Thai households throughout the country that cooked and ate dishes that were never written down, let alone published. These dishes, recipes, and culinary traditions were passed down from generation to generation orally. And when one of these families makes a claim that such and such dish is an ancient family recipe, do we automatically dismiss that as hearsay just because there’s no body of literature to support that claim?

It’s one thing to prudently take every claim with a grain of salt. But it borders on arrogance to dismiss anecdotal evidence as illegitimate simply because people did not have the intellectual or financial means to transmit their stories in written/printed form. In fact, throughout history, those who had less power, knowledge, and resources always outnumbered those who had more. Sure, dig hard enough and you might find a handful of old books on the subject written by regular Joes and Janes, but they are few and far between and almost have never been elevated to a level anywhere near the ones written by those from a higher socio-economic stratum.

3. Fusion is bad. Fusion is really, really bad. I hate fusion. Fusion is the antithesis of authentic Thai cuisine.

See, I think we all want to be one of those cool, authoritative gatekeeping purists who hate fusion too; we’re just not clear on what fusion really means.

Does fusion mean applying a non-Thai technique to local ingredients? Does fusion mean using non-Thai ingredients in a Thai dish? If so, name one Thai dish that wasn’t “fusion” at one point in history. Keep in mind that until the Europeans brought over chili, tomato, and papaya, we never cooked with them. Red or green curry, if they had been invented that early on (they weren’t), would have been — gasp — fusion.

Food is not a static thing. It evolves much like language and everything else. Years ago, we didn’t cook with carrots, because we didn’t have carrots. Now that we have and want to use carrots in some dishes, we’re committing the crime of fusion?

Is it possible that 50 years from now, this period, which allegedly represents the corruption of Thai cuisine, will be looked upon with nostalgia as the good old days?

What are the implications of all this? Honestly, I don’t really know, and I haven’t thought it through. I’m just in the process of eliminating the notions which I can’t support in hopes of some clarity.

What about you? Your thoughts?

1 Originally, the sentence read, “… before the dish ceases to be recognizably what it’s supposed to be … .” But that implies that there is a rigid, frozen, canonized form of what it is “supposed to be.” And that’s an idea I cannot substantiate.

52 Responses to What Is “Authentic” Thai Cuisine?