Ladies and gentlemen, allow me to present to you the Zealous Water Buffalo, my sometimes-annoying quadruped alter ego. ~Leela

“I’m writing a cookbook,” Leela says in response to my inquiry on what she’s been up to lately. We’re sitting at the coffee shop inside the quaint Neilson Hays Library in midtown Bangkok, catching up on what’s been happening. Leela does her writing here whenever she’s in town, and I, of course, always tag along.

She tells me about how the idea of writing a cookbook was ever present in the back of her mind but never became solidly formed. Some publishers reached out to her, but since the idea was still so vague, she remained indecisive. Then Ten Speed Press came along at the time when she finally figured out what the book was going to be. And things fell into place. Fast.

“It’s going to be a book on Thai cooking,” she adds while ferociously attacking her Ploughman’s Lunch as if cheese eating would be outlawed, like, tomorrow. “What do you think, Buff?”

What do I think? I’m thinking you’re chewing a lot for a monogastric. But don’t let me interupt.

“That’s exciting!” I exclaim. I mean it. I never exclaim disingenuously.

She stops chewing and stares at me for a few seconds in half skepticism and half curiosity as if waiting for something to happen.

“But don’t your muscles freeze and you, like, fall to one side or something when you’re excited?” she asks. I let out a sigh, coming this close to giving her my front right middle hoof. Apparently, somebody has confused a water buffalo with a myotonic goat. Thank goodness she’s writing a book about cooking, not zoology. 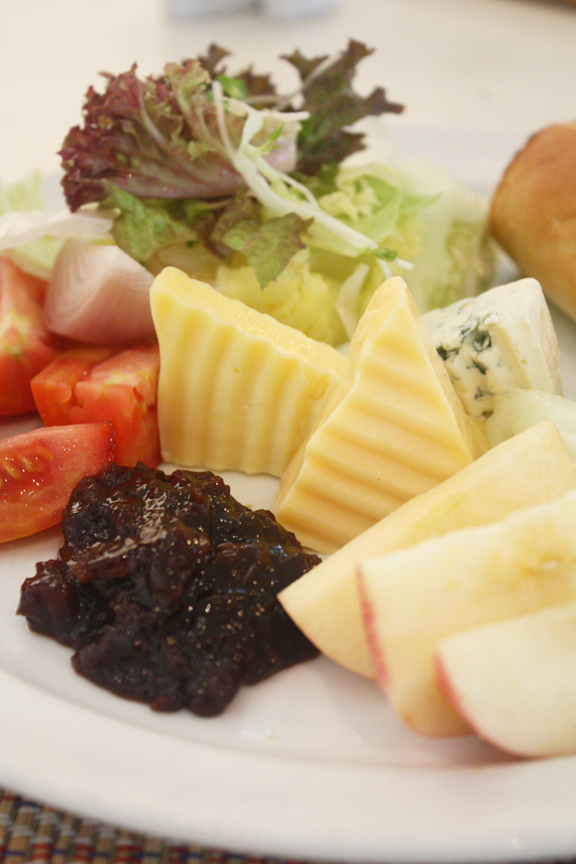 “Well, they have tractors for rice farming, why a water buffalo?”

Actually, the logic is questionable, but I get her point. There’s the cute factor. Plus, you can’t get milk out of a tractor to make mozzarella. I mean, when’s the last time you see a John Deere with an udder? Wait – is that what she meant? Never mind.

“I firmly believe that books will not be obsolete any time soon,” she’s dipping a piece of apple into the chutney. Odd combination, if you ask me. “Sure you can get recipes online these days, but there’s nothing like a book that you can cuddle with near a fireplace, flipping through the pages, savoring the words and the photos …,” she stops to chew again.

“So this book will be, like, what —  a bunch of recipes for your favorite Thai dishes?” is my question. Yup, she says — but not just “a bunch of recipes” that have been chosen haphazardly, however.

Having lived as an expat in the United States for a long time – as a poor and hungry student for a good part of it – she has learned not to let the scarcity and prices of fresh Thai ingredients stop her from creating her favorite Thai dishes as she remembers them growing up.

The book, scheduled for release in early 2014, aims to serve as a go-to collection of internationally known Thai dishes. In other words, name a dish that you always order every time you visit a Thai restaurant overseas, whether it’s two blocks away from your apartment or in another city where your in-laws live, and it’s likely that there’ll be a recipe for that dish in this book.

“The majority of the recipes in the book are recipes which I’ve never published on the blog and only a handful of them are variations of the ones which the readers have seen before,” she adds.

Not a rehash of the blog, in other words. Gotcha.

“Are you having fun writing this book?” I ask, though I already know the answer. This woman loves writing as much as I love taking a mud bath and chewing on a cud on a sunny day.

Predictably, she nods. The way she grins from ear to ear is telling me there’s nothing else she’d rather do.

“Last question,” I know I risk ruining a beautiful moment, but I can’t help it. “Will there be ruminant-friendly recipes in your book?”

Leela looks away, pretending not to hear. She’s mumbling under her breath about how in the old days they used to make glue out of buffalo hide to use in manuscript paintings in some country – or something.

I think that pretty much concludes our conversation.