By Leela on February 11, 2013 in She Deglutenizes, She Veges 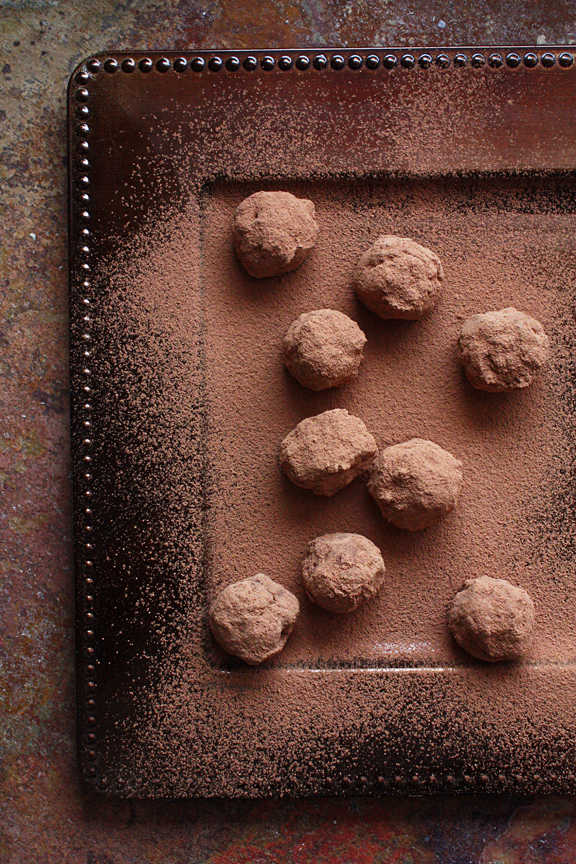 This recipe is an adaptation of the original recipe developed by Kristen Klassen of award-winning, Hawaii-based Madre Chocolate. It has been given to my readers courtesy of the company’s Chocolate Flavormeister, ethnobotanist Nat Bletter. My thanks go to both of them and Madre Chocolate.

Enjoy these rustic, full-flavored truffles — a combination of banana foster and dark chocolate ganache. The fact that they’re vegan may also be of added benefit to some of you.

Print
Prep time
20 mins
Cook time
10 mins
Total time
30 mins
Author: Kristen Klassen (adapted by Leela)
Recipe type: Dessert, Candy, Sweets
Serves: Approximately 50 truffles
Ingredients
Instructions
Notes
1.) I prefer chocolate with at least 60% cocoa content. 2.) Klassen's original recipe calls for one cinnamon stick which is cooked along with the banana mixture and removed before the mixture is mixed into the ganache. I experimented with five-spice powder and really liked it. You can go either way. 3.) Depending on several factors including the temperature of your kitchen, the chilled ganache may go soft when you're about ⅓ of the way through. Simply pop the bowl right back in the fridge and take it out again when the ganache has firmed up enough for you to roll it into balls. You may need to do this 3-4 times.
Wordpress Recipe Plugin by EasyRecipe
3.2.1226
Baked Salmon in Lime-Coconut Cream Sauce (ปลาแซลมอนอบกะทิ)
My Pad Thai on Geek & Sundry by Felicia Day

4 Responses to Banana Chocolate Truffles: Vegan Truffles with a Hint of Five-Spice Powder