By Leela on March 27, 2013 in She Deglutenizes, She Simmers, She Thais 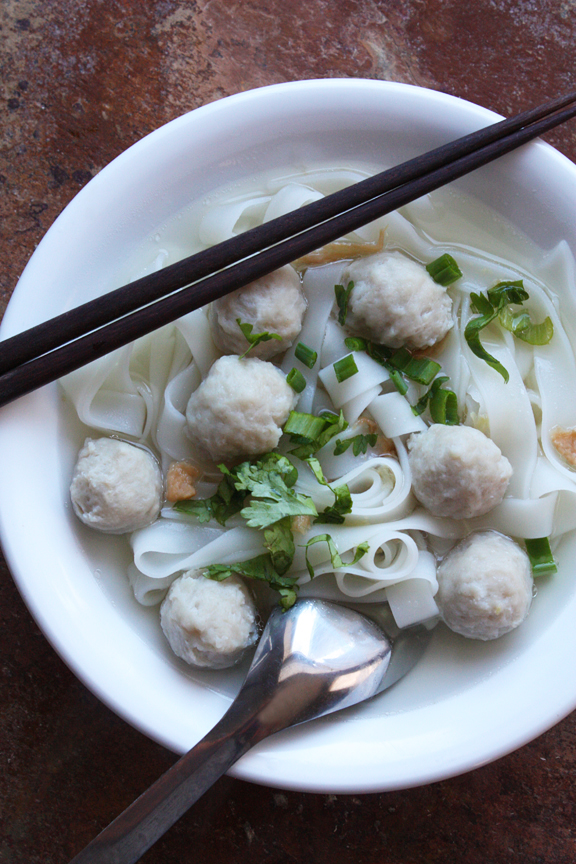 Whenever I get an email from someone asking me to post a recipe for Thai-style noodle soup which they had on their last trip to Bangkok, I always say yes. But then I always feel fearful for both of us.

I fear for myself, because I know it’s going to be a lot of work – a serious commitment. I don’t even know how or where to begin. A book, I mean, A HUGE BOOK, could be written on that one genre of modern Thai food alone. I’m not exaggerating. To write a quick, simple post on Thai noodles and the whole noodle culture would be an insult to something so complex. I fear that the more I say, the more pessimistic I sound and the more it seems that I’m talking people out of making noodles — which isn’t true. Well, kind of. But not entirely.

I’m also fearful about disappointing those who are eager to learn how to make Thai street noodles at home, because I’m not sure they know what’s involved and how much work it actually requires to turn their kitchen into a Bangkok noodle stall. See, there’s a reason noodles are not home cooking. Ask an average Bangkokian how many times a week, he makes noodles at home, and I wouldn’t be surprised if he goes, um, like, zero …?

Or maybe I think too much. Maybe you just want something simple. If that’s the case, let’s start with what I consider the easiest type of Thai (Thai-Chinese, actually) noodle soup: noodles in clear broth with Asian-style bouncy meatballs. I can’t think of anything else out of the hundreds of different types and combinations of noodles that is simpler than this. 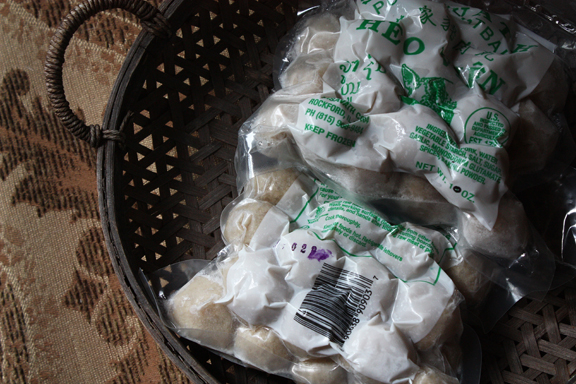 (There will be a summary in recipe format at the end. Right now, please just walk through these things with me.)

You need meatballs. They have to be these bouncy Asian-style meatballs which are different from the kind of meatballs you would find in European cuisines. These meatballs are made from meat that is ground to a smooth and very sticky paste, formed into small spheres, and pre-cooked before they’re sold. Sometimes starch is added; sometimes not. The texture? If you throw one on the ground really, really hard, it won’t go splat; it will bounce. That’s what I mean by ‘bouncy’. Those who have had Vietnamese phở that comes with beef balls are already familiar with the texture of Asian meatballs.

These meatballs are most commonly made of beef, pork, and fish (chicken balls, shrimp balls, and squid balls wouldn’t be uncommon in Thailand). The beef variety often comes in two types: tender, smooth, and meaty beef balls and gristly beef balls (because they’re made from gristly bits of the cow which a lot of people, including me, like). This meaty vs. gristly thing doesn’t apply to pork, fish, or anything else.

I’ll show you how to make them at home at some point. But for now, let’s just buy them. They come vacuum-packed and frozen. Just look for them in the freezer of your local Southeast Asian grocery store. If you see “beef balls” or “pork balls” somewhere on the package, you’re good. These things, as mentioned above, come fully cooked and, once thawed, are ready to use.

For this recipe, we need beef balls. Smooth ones. 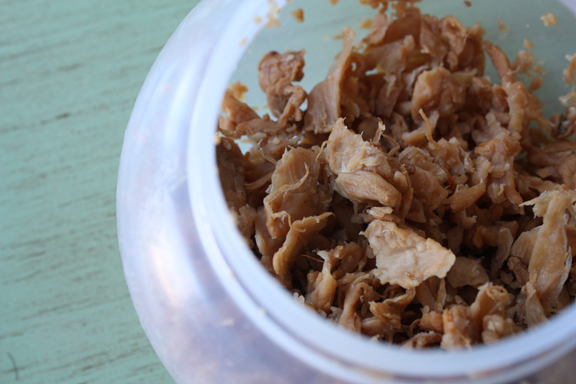 Next on the list is preserved/salted cabbage (tang chai ตั้งฉ่าย), an ingredient which I haven’t talked about on this site (because I’d never made this type of noodles here before). Preserved cabbage is different from preserved radishes used in pad thai (see my post on pad thai ingredients); the two are not at all interchangeable.

But don’t be too concerned, because it’s probably not that easy to get the two confused at the store. This is because while preserved radishes often come in a sealed plastic bag, preserved cabbage, at least when it comes to Thai brands, often comes in a short, round jar that’s bulging on all sides like a pressed grapefruit.

What I’m trying to say is that if you put a grapefruit on the table and press down on its top really hard to the point where the grapefruit is just about to burst open, it will look just like a preserved cabbage jar. But when you’re at the store, don’t go looking for an actual grapefruit that’s bulging, though; look for a container that looks like a bulging grapefruit with “preserved cabbage” on the label.

I’m sorry about my simile. Don’t leave me. I promise I’ll change. I love you. 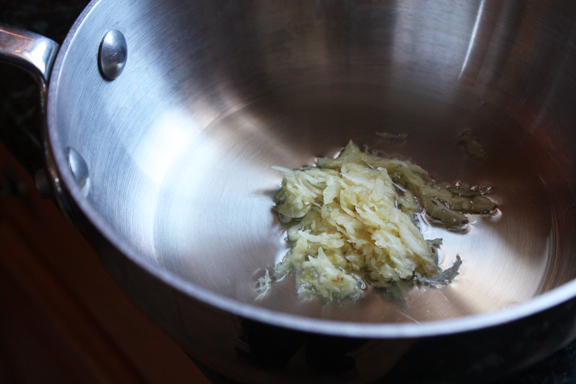 Before you begin the process, you need to make fried garlic oil (kra-tiam jiao กระเทียมเจียว)

Fried garlic oil serves two purposes when it comes to Thai street noodles: it perfumes the dish and it lubricates the blanched noodles thereby keeping them from clumping up. It’s an essential ingredient that is found at any noodle stall regardless of what type(s) of noodles it sells.

To make good fried garlic oil, five things are important:
1. Use unflavored oil.
2. Begin the process with the pan, the oil, and the garlic at room temperature. If the oil is hot, the garlic will burn before it gets to be golden, sweet, fragrant, and thoroughly crispy.
3. Use low to medium-low heat. You want to cook it long, slow, and low.
4. Make sure the garlic is pounded into shards. Not smashed and squished into a paste. Not finely chopped. Shards. The easiest way to turn whole garlic into garlic shards is with a mortar.
5. Allow the finished crispy garlic and its oil to cool down completely before storage; otherwise it turns soggy. 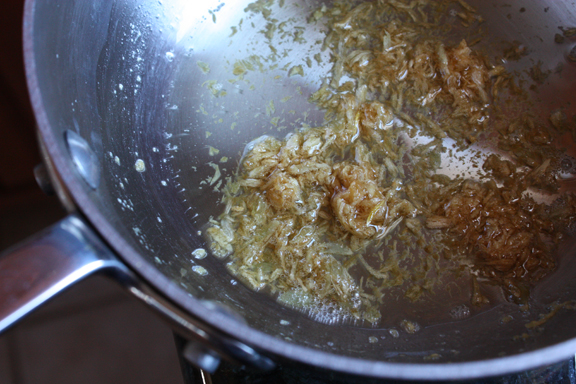 Let me talk a little more about the shard thing.

I find that pounding the garlic into shards of roughly equal size and thickness is key to creating evenly browned and crispy fried garlic for Thai-style noodle making. You want every single little piece to brown evenly at the same temperature over the same period of time. If you have larger pieces and smaller pieces in the mix, by the time the larger ones are thoroughly browned and crispy, the smaller ones will have burned.

Shards (achieved through pounding) also create the kind of crispy texture that is better than just tiny, tiny pieces of garlic (achieved through chopping). Think regular bread crumbs and panko (Japanese-style bread crumbs). Same deal. Turning the garlic into a fine paste won’t do either; it will just form a sticky ball once caramelized.

This whole point isn’t so important in a noodle soup such as this, though, because the garlic eventually becomes soft in the broth. However, knowing how to make crispy garlic makes a difference in the brothless version of this dish (almost every noodle dish comes in “wet” and “dry” varieties — more on this in the future). So I thought I would mention it. 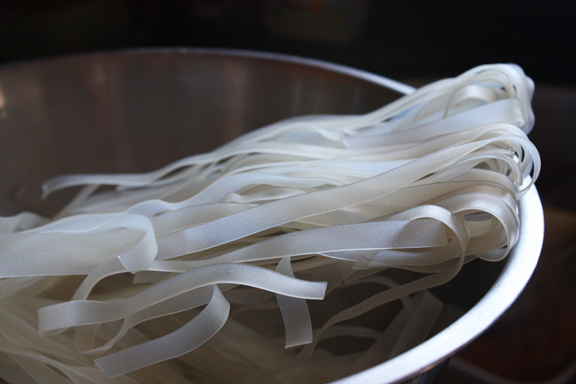 Moving right along — the noodles.

You can use any type of noodles you like. The fresh ones only need to be blanched in boiling water. The dried ones, like what I use here, need to be boiled in large pot of water pasta-style until they’re soft enough. No soaking required since we’re not preparing them for frying.

What you see here is X-large rice noodles mentioned in my post on pad thai noodles. These are not recommended for pad thai, but can be used in pad see-ew if you can’t find fresh wide rice noodles. There’s no particular reason why I went with these noodles; they were just there. 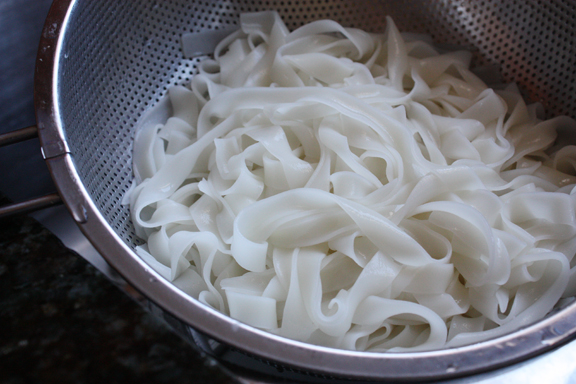 Boil the noodles while they’re dried like you do dried pasta, being careful not to break them for they’re quite brittle.

After 10-15 minutes, they should be soft enough to eat. Go for soft. In this context, al dente is not a good thing.

Oh, I forgot to tell you, by this time, you should already have a pot of stock boiling on the back burner with your smooth beef balls floating on the surface — all ready to go. The aromatics, namely green onions and cilantro, should also be all chopped up and ready to use. There should be some seasonings set out on the table as well. This noodle soup is quite bland. This is the way it’s made in Thailand. Most noodles are made in such a way that they’re savory, i.e. have enough umami in them, but somewhat neutral in terms of flavor.

That’s why you’ll always see a seasoning caddy at any noodle stall. In Thailand, diners are expected to season their own noodles to taste. I could write a long post on the seasoning caddy, its varieties, and the whole “season to taste” concept alone. But let’s keep that for later. 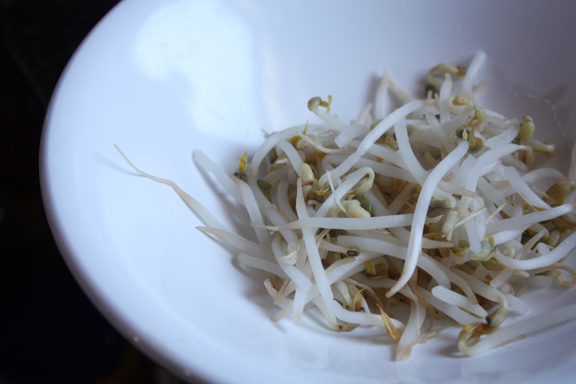 Now the bean sprouts, one of the most common vegetables you will find in your Thai-style noodles.

At a noodle stall, the vendor will have a tall, large pot with two sections: one contains the broth and one contains boiling water for blanching the vegetables and noodles. Usually, a handful of vegetable is placed in a wired basket, followed by a handful of noodles; both of them get blanched in boiling water until the noodles are soft and the bean sprouts tender-crisp.

But since we’re not making noodles one order at a time in that way, I’ll have you blanch the bean sprouts separately — all four servings at once. Then you divide them among four bowls. 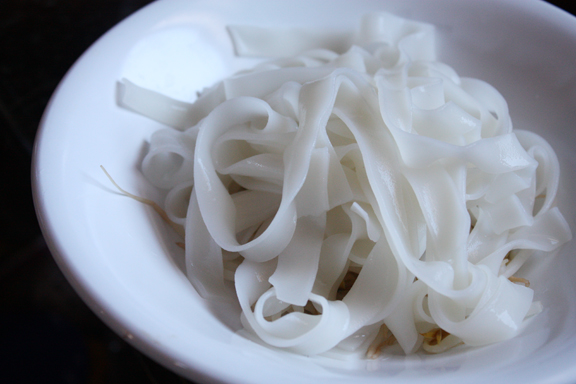 Cooked noodles go on top. Be sure to rinse them under hot tap water to get rid of the excess starch and shake off all excess moisture before adding them to the serving bowls. 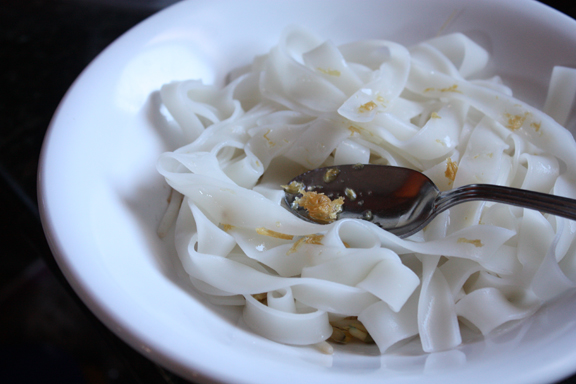 Immediately, some fried garlic oil goes in. Stir it into the noodle strands to keep them lubricated.

When all of this is happening, that pot of broth with floating beef balls should be simmering on the stove. 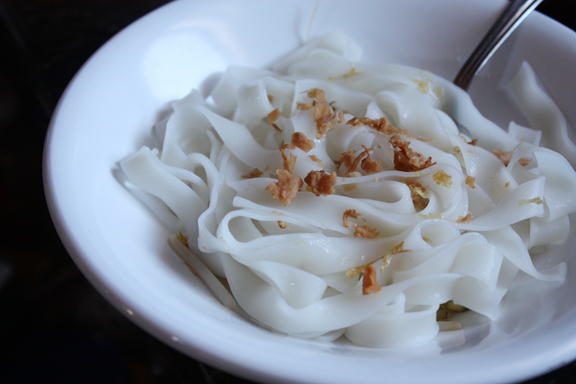 Sprinkle a pinch of preserved cabbage on top of the noodles. This ingredient is routinely added to noodles in Thailand, but if you don’t like it, you don’t need to use it. It doesn’t taste or smell funky; just a bit salty. 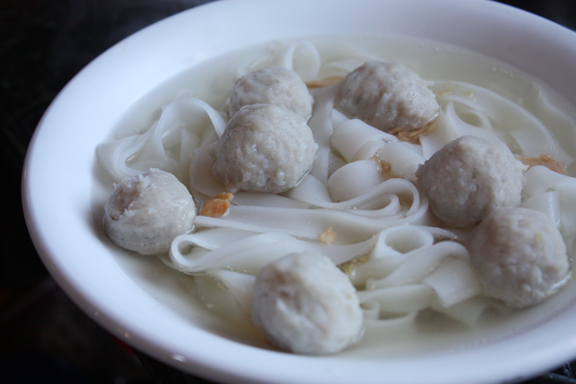 Then ladle some broth over the noodles, covering them entirely. Sprinkle some chopped green onions and cilantro leaves on top. Dust the whole thing lightly with ground white pepper (black pepper is never used). As you can see, I ran out of ground white pepper the day I made this.

Then season to taste at the table. I recommend white vinegar, fish sauce, sugar, and dried red pepper flakes. Consume immediately while the broth is still hot.

Or if you’re anything like me, you wait until your noodles become cold and have absorbed most or all of the broth, before you eat it like a cold, noodl-y … something. It drives people around me nuts, but I can’t help it.

And now the recipe.

Print
Prep time
30 mins
Cook time
30 mins
Total time
1 hour
Author: shesimmers.com
Recipe type: One-Plate Meal
Cuisine: Thai-Chinese
Serves: 4
Ingredients
Instructions
Notes
You can use store-bought chicken broth for this. However, the best broth for this particular application is homemade broth made of nothing but raw chicken carcasses or raw pork bones and water. To make 2 quarts of stock, use about a pound of raw chicken or pork bones and 10 cups water. Start out with both ingredients cold. Bring the mixture to a boil, then simmer, covered, for about 2 hours (you can throw in a couple of smashed garlic or cilantro roots, if you want). Skim off scum towards the end, strain, and discard the bones. You should end up with roughly 2 quarts. Add some fish sauce or salt to it just to give it some flavor.
Wordpress Recipe Plugin by EasyRecipe
3.2.1230
Tom Kha Gai, the Rustic Way
Stir-Fried Pumpkin with Eggs (ผัดฟักทองใส่ไข่)