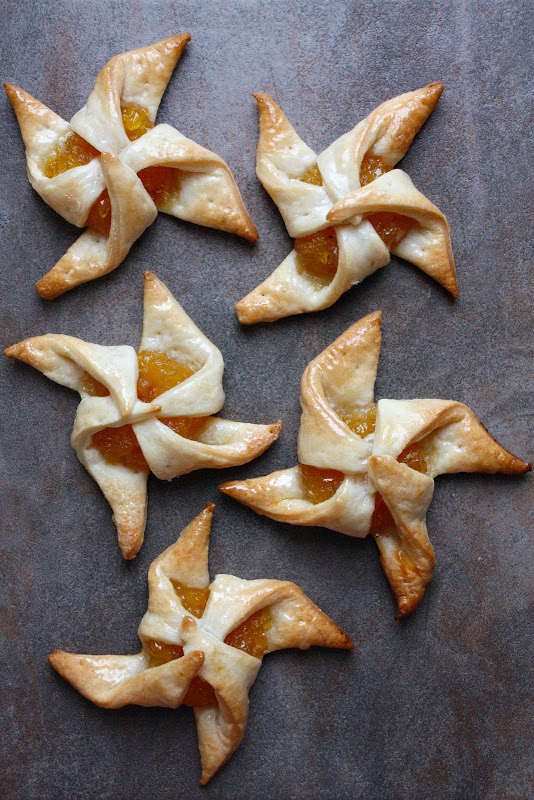 I know in saying that these individual four-bite* pineapple jam “tartlets” aren’t Thai, I’d be stating the obvious. We love them, though, which explains why they’re found in pretty much every old-fashioned shophouse bakery — the kind that still sells pork floss-filled buns or piped butter cookies with tiny pieces of maraschino cherry on them.

In terms of perceived sophistication, pineapple jam pinwheels probably aren’t placed anywhere near one of Bangkok’s latest “it” desserts, panna cotta.** But, heck, these little gems aren’t going away any time soon. They have been around long before the invasion of the jiggly Italians and I predict they’ll continue to be around for a long time. 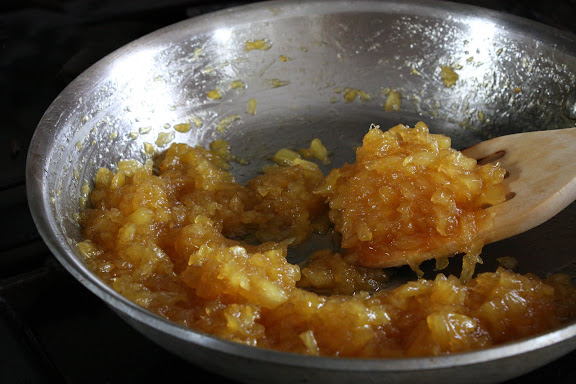 For me, it’s the quality of the pineapple jam that makes or breaks the end results. Pineapple jam that is too sticky and tooth-achingly sweet is a turn-off. By making your own jam filling, you can control the sweetness and determine the consistency that suits your taste. As long as the filling is sweet enough to compensate for the dough whose flavor isn’t so assertive and thick enough to form a ball without running/disintegrating during baking, it’s all good.

Pineapple is best for this recipe, in my opinion. But you can also use any fruit that is sweet, tart, and pulpy. Apricots come to mind. Peaches would be nice as well. A fan of mango-lime jam, I’m also tempted to replace the pineapple with under-ripe mangoes. However, a word of warning: you cannot use commercial jams or jellies; they’re too runny most of the time to begin with, and have been gelled with pectin which loses its textural integrity in the oven. You need a fruit jam that has been thickened by being cooked down to a thick-ish paste of its own pulp. 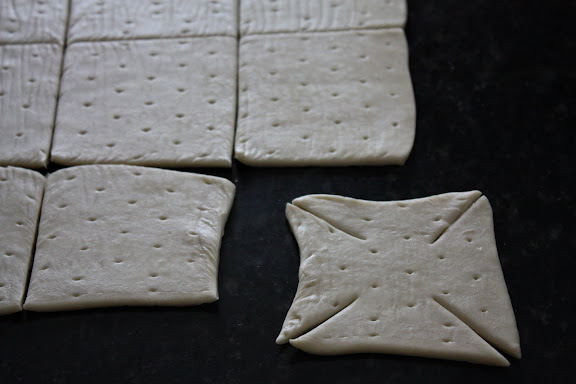 If you’re the type that makes their own puff pastry from scratch, I recommend this puff pastry recipe from Evil Shenanigans. For those who don’t mind ready-made puff pastry, feel free to use your favorite brand of frozen puff pastry. I used Trader Joe’s here.

All you have to do is thaw out two squares of puff pastry, cut them into 9 smaller squares measuring roughly 3.5″ x 3.5″. Then make four diagonal cuts, starting from each corner about 1.5 inches into the center as shown. 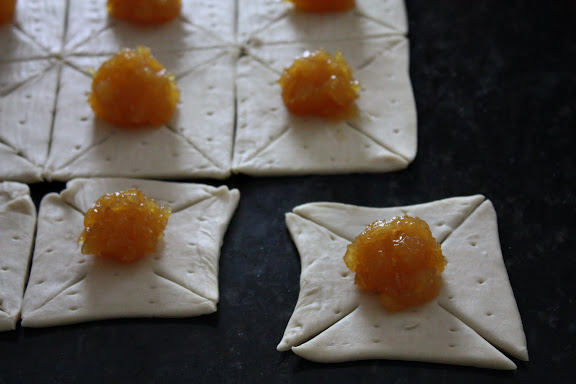 Take a big spoonful of the filling, form it into a ball, and place it in the center of each square. I hate to be too picky about this, but the filling:pastry ratio is kind of important. Each bite should give you enough filling to adequately flavor the amount of puff pastry that comes with it. I don’t know about you, but when a bakery is stingy with their pineapple filling, I think less of them. The pineapple jam is not a garnish; the pineapple jam is one of the two essential ingredients and deserves to be treated accordingly.

And that’s the beauty of making these tartlets at home; just as you can control the level of sweetness of the filling, you can, too, control the filling:pastry ratio. 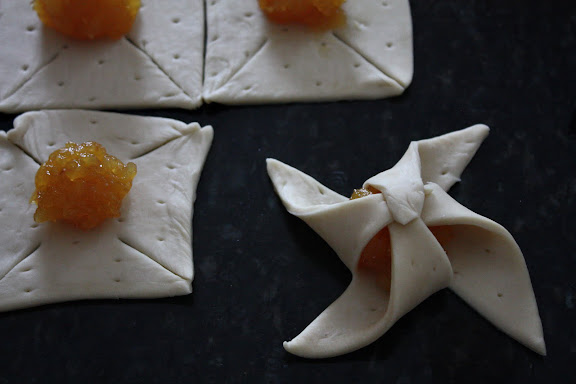 Once the filling is placed in the center of each puff pastry square, you form a pinwheel as shown above. There’s no need to do anything to glue the tips of the puff pastry together; just a light press on it is enough.

Now, there are two schools of thought. One advocates the brushing of an eggwash on the puff pastry to achieve a nice color and a glossy sheen on it after baking; the other prefers to reinforce the fruitiness of the filling by baking the pastry naked then brushing melted fruit jelly on it afterwards. I belong to the latter group. The glossiness you see here comes from melted homemade apply jelly, also known as Christine Ferber’s apple pectin stock. The downside to this latter method, however, is that it makes it difficult to store the tartlets on top of each other in one big container as they are kind of sticky.

But, you see, I have never been in a situation where there are lots of these pinwheels left to store. 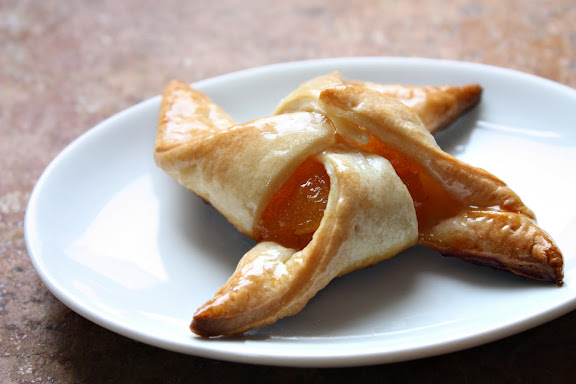 *You’re supposed to eat each pinwheel in four bites — one “blade” and 1/4 of the filling at a time. Some of us Thai kids have decided for you since we were in, like, 3rd grade that this is the only proper method of eating these pineapple pinwheels.