By Leela on January 16, 2015 in She Deglutenizes, She Fries, She Simmers, She Thais, Uncategorized 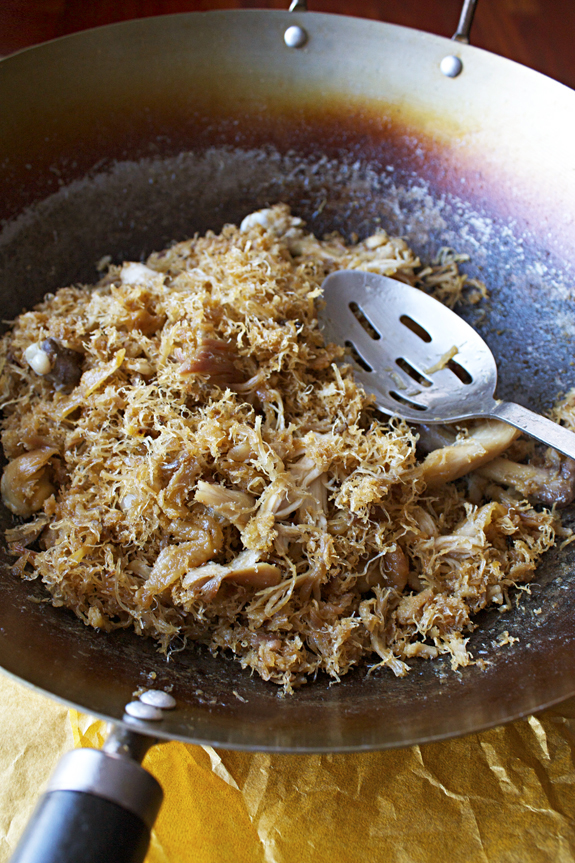 Last November marked the 6th anniversary of SheSimmers. I’ve been doing this thing for six years. And though it doesn’t feel that way to me, that’s a long time. In most relationships, this is long enough for people to feel so comfortable with each other that even certain bodily functions no longer present an issue. Don’t worry; I’m not going to do anything in your general direction — at least not yet. All I’m saying is that I now feel comfortable enough around you guys to post things that I was once afraid might cause you to avert your eyes. This thing you’re looking at, for example. You can see why no poets have ever compared it to a night of cloudless climes and starry skies or declared it more lovely and temperate than a summer’s day. In fact, is there even a way to make it look cute? Stack it up like brownies and tie it with 3-colored raffia? Slap a few Hello Kitty stickers on it? I don’t think so.

But actually, now that I think about it, I did this once before. Remember four years ago when I wrote about salted/fermented soybean paste? That was the only time on this blog I’d ever described something as aesthetically-compromised. (I didn’t say she was ugly, though; I just said she was no Helen of Troy.) What happened next? Many of you have fallen in love with khao man gai (RTGS: khao man kai), a dish whose success rests on this condiment. Well, these chicken shreds are no different. So even though you may hesitate to make room in your life for something that looks like this, I’m asking you to trust me that this dish could very well become your new best friend. 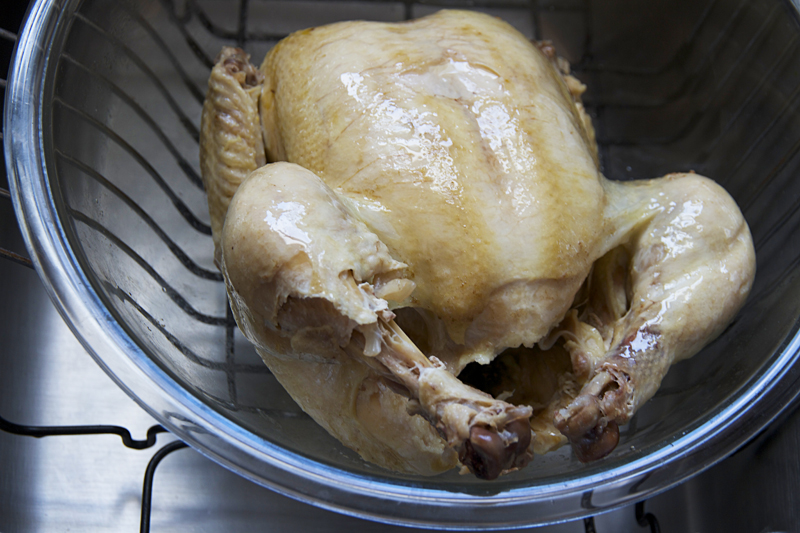 I’ve never described any kind of food as “life-changing,” but I’m tempted to use this hyperbolic term on salted chicken shreds (kai khua kluea or kai khua khem). After all, isn’t that kind of what happens when you remember distinctly your life before and after your discovery of a dish? Isn’t that what happens when you stumble upon something one day and you wonder how the heck you ever lived without it? That’s exactly what happened when I met this dish.

It took place in high school on the day I visited one of my classmates at his home so we could work on a school project. It was close to dinnertime, and his mom put a bowl of curious-looking chicken shreds on the table for us to eat with rice. She was apologizing profusely for being “ill-prepared,” saying that this was all she could make with what she got that day. This dish, you see, is just a way many Thai-Chinese mothers repurpose boiled chicken which has been used as an offering during most Chinese festivals one of which happened a couple of days prior to my visit. But since I didn’t grow up in a household of Thais of Chinese descent, I’d never known such a thing existed, and to be served something as wonderful as that was truly exciting. Where else could I have found salted chicken shreds? It’s not something you find at a restaurant — not even at a rice-curry shop on the street. This is something you eat when you’re alone or with your family. It’s a home dish in the truest sense of the word. Maybe that was why my friend’s mom was so apologetic. She didn’t think it was good enough for company. She thought she was serving me leftovers. But I felt I was given a royal treatment. 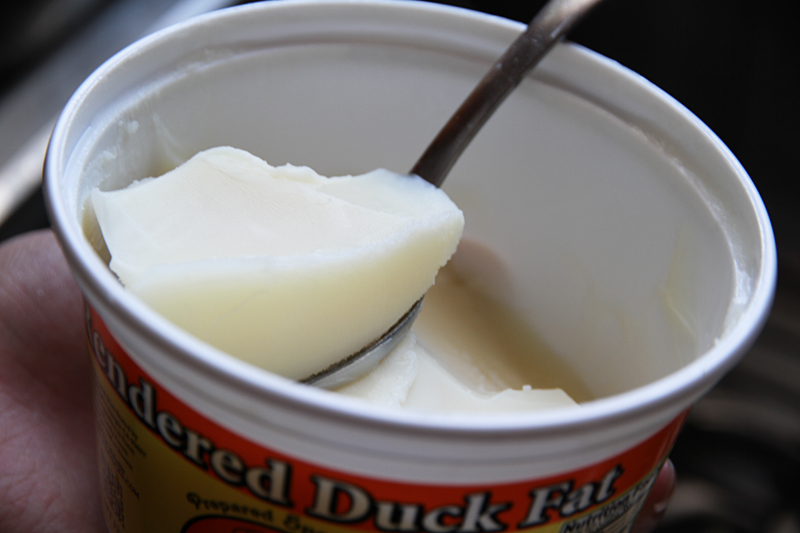 This “humble” dish was one of the best things I had ever eaten up to that point in my life. Every bite tasted pleasantly briny and savory with all the chicken juices concentrated and cooked right into every strand. A lack of uniformity is exuberantly celebrated here: the glistening shreds of meat were crispy and wispy in some places and a tad chewy in others. Think duck, er, chicken confit meets chicken jerky meets gribenes. It’s a testament to how “juicy” isn’t the only way you can describe well-prepared chicken. These are strands, shreds, and nubbins which together form something quite wondrous. I still remember the way my friend and his parents looked at me tuck into a bowl of warm rice topped with these chicken shreds with the kind of enthusiasm they hadn’t anticipated. On their faces was a nice mix of delight, surprise, amusement, and pity as in, wow, clearly this poor girl has never had this before and she seems to like it a lot and, omigosh, look at her — she’s really making up for lost time…

You know what happened a few days later? I showed up back there with a boiled chicken in my hands, begging my friend’s mom to show me how the dish was made. She graciously complied. Then I took some of the finished product home for my mom to taste. Mom was so pleased she uncharacteristically let out a mild swear word to express joy before asking me if she could be my first student. 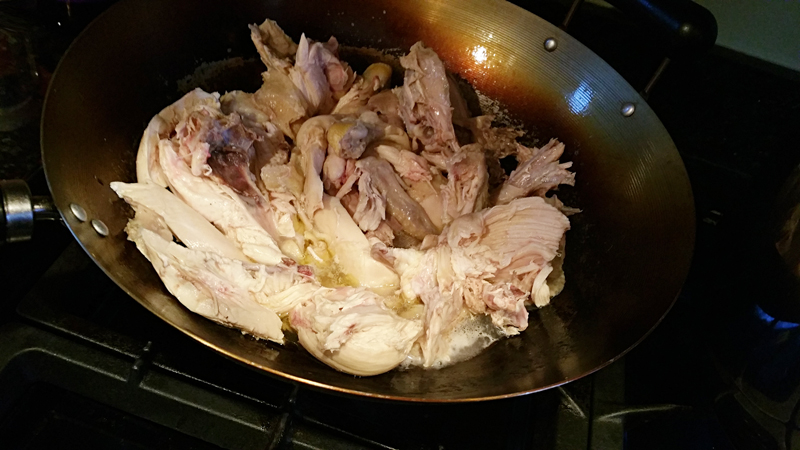 The following is how you make salted chicken shreds. It’s not hard. It involves only 2 (or 3) ingredients. But it takes time and patience.

You will need 4 pounds total of bone-in, skin-on chicken. No skinless chicken. No boneless chicken. If you could achieve the intended results with anything else, trust me that I would have offered you more options.

Fine. I’ll offer you two options just to give you an illusion of freedom. You can use:
1. One whole chicken that weighs 4 pounds or,
2. 4 pounds total of chicken quarters (half of it should be the thighs, however, because we need their fat). 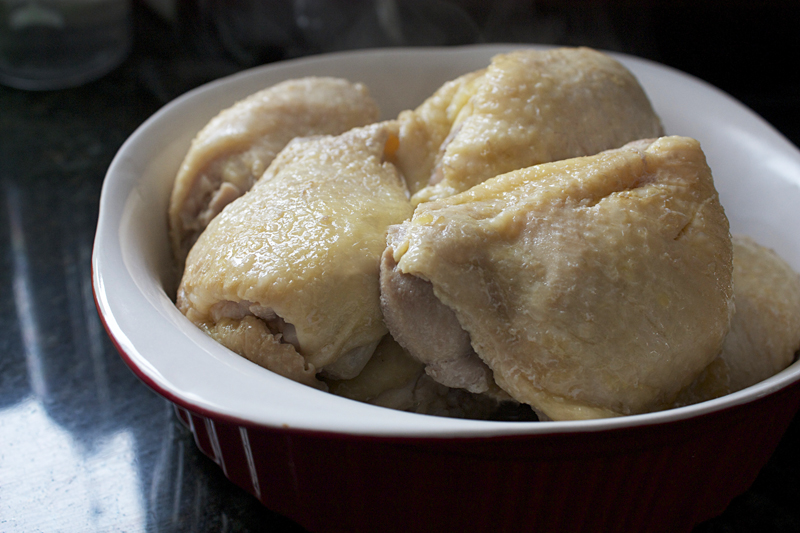 The advantage of #1 is that it allows you to stay true to tradition (explained above) and to get the taste of both white meat and dark meat. The disadvantage of #1 is that it’s a lot of meat and not enough fat (especially the breasts where there’s a lot of meat covered by just a thin sheet of skin) which means you will have to do what I’ve been taught to do which is to supplement with more fat – about ½ cup. This could be in the form of rendered chicken fat or duck fat, ghee or clarified butter, or flavorless vegetable oil.

The advantage of #2 is that you can customize your chicken. For example, I don’t like white meat, so I skip the breast quarters and use all chicken thighs. The thighs come with a lot of skin which, during the cooking, releases more than enough fat needed for this recipe to succeed without you having to supplement with additional fat. The disadvantage? Well, given its origin, you will lose some of the dish’s soul when you use chicken parts. Your heart will break a little, but hopefully it heals fast.

Well, that’s all the freedom you have. Nothing from this point on is negotiable.

Once you’ve made the decision on the chicken, cook it in a pot of water without adding any seasoning. You will be tempted to build layers of flavor, to season at every stage along the way, etc. You will resist this temptation.

Then you start cooking. And you will need three things:
1. A big, well-seasoned (or nonstick) wok or sloped sauté pan. You want something deep enough to keep the chicken inside it, but also wide enough to ensure good evaporation.
2. One hour of your time.
3. Strong arms. 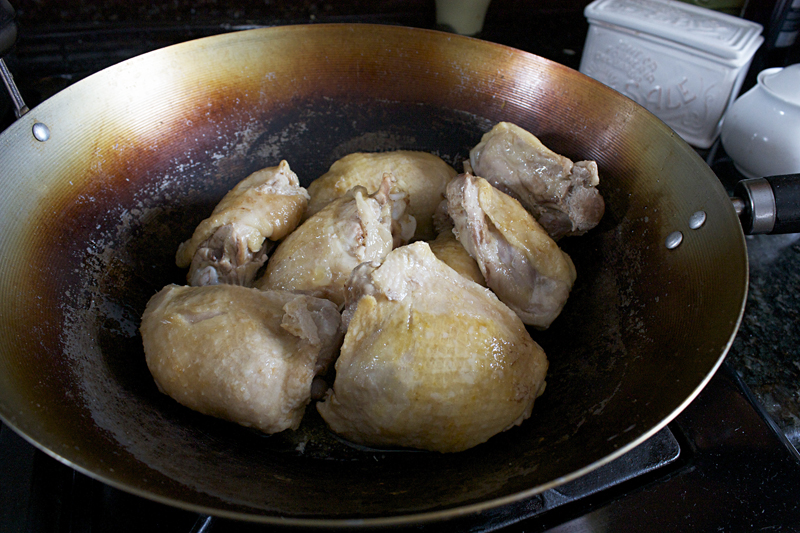 You tear up the chicken into 3- to 4-inch hunks and put them into a cold, dry wok along with the skins, the bones, and the chicken fat which you have skimmed off the cooking water. Nothing will be thrown out at this point. Neck bones. Thigh bones. Rib bones. Everything goes in. There’s no need to try to separate the bones from the meat; you’ll see that the chicken debones itself in the process of cooking. (For this batch, I used chicken thighs and I put them in the wok whole.) Then you place the wok over medium-high heat. Stir the meat around, shredding it with the tip and the blunt end of the spatula as you go until the fat starts to get released from the skin. This should take about 10 minutes.

At this stage, sprinkle 1 tablespoon plus 1 teaspoon of salt all over the chicken. Use regular table salt. (You can use kosher salt, but you need to convert the amount to make it equal to 1 tablespoon and 1 teaspoon of regular table salt.) That’s the only seasoning you need — salt. You will hear a voice in your head that urges you to use fish sauce, soy sauce, or add a dash of ground pepper, but I urge you to ignore it. You will hear another smart-sounding voice in your head urging you to infuse the cooking liquid with fresh herbs, dried spices, etc. You will look at that voice in the nonexistent eye and stare at it quietly and indignantly until it packs up and leaves in defeat.

The magic of this dish is in its simplicity. Magic has its own way of making wonderful things happen.

If you use whole chicken or chicken breast quarters, add ½ cup of your supplemental fat of choice (see above) now. Turn the heat down to medium and continue to stir the meat and break it up until the chicken meat falls off the bones and turns into shreds. If some brown bits stick to the bottom of the wok, scrape them off and stir them into the chicken meat. You don’t need to stir nonstop. But you need to keep an eye on the wok at all times. Don’t crank up the heat in hopes of speeding up the process. This cannot be rushed. You need a full hour. 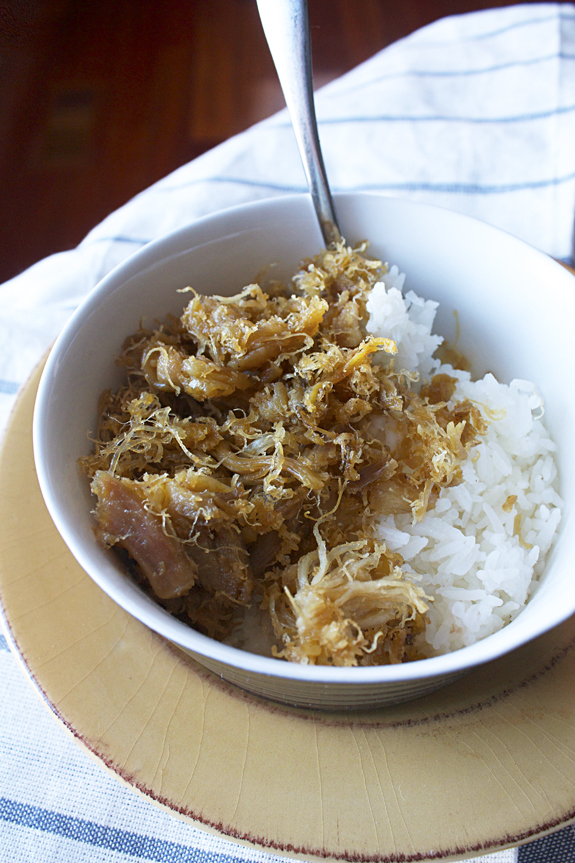 After 30 minutes or so, the gentle bubbling of the chicken juices will give way to the faint sound of chicken meat gently sizzling in rendered chicken fat. The house will smell wonderful. The meat will have been broken down to strands and shreds now. You will continue to sauté the meat, which, at this point, will make you feel like you’re “toasting” it. Continue to scrape off anything that may stick to the bottom of the wok and stir it back into the meat. Pick out and discard any bones with no meat attached to them. About 20 minutes from that point, the chicken skin will have been reduced to crunchy bits and the chicken meat will have turned into about 6-7 cups of thin, wispy golden shreds – crispy and glistened with the chicken fat in which they have been cooked. This is when you take the wok off the heat. Remove and discard the bones; they’ve already given to the dish all the flavor in them.

Now is the time to put some rice in a bowl. Spoon some of the salted chicken shreds over the rice. By themselves the chicken shreds could be a tad too salty to you. But when you eat them with the bland rice, as intended, you’ll find out that the world is just as it should be. You may be tempted to enhance things with a side of sriracha or nampla prik. But you will fight that temptation and enjoy this dish the way it’s meant to be enjoyed, i.e. in its unadorned, rustic simplicity.

It’s my hope that, after a few more bites, you’ll start to feel resentful toward me for keeping this dish from you for six years.