By Leela on August 18, 2015 in She Explores, She Rants and Muses, She Uncooks 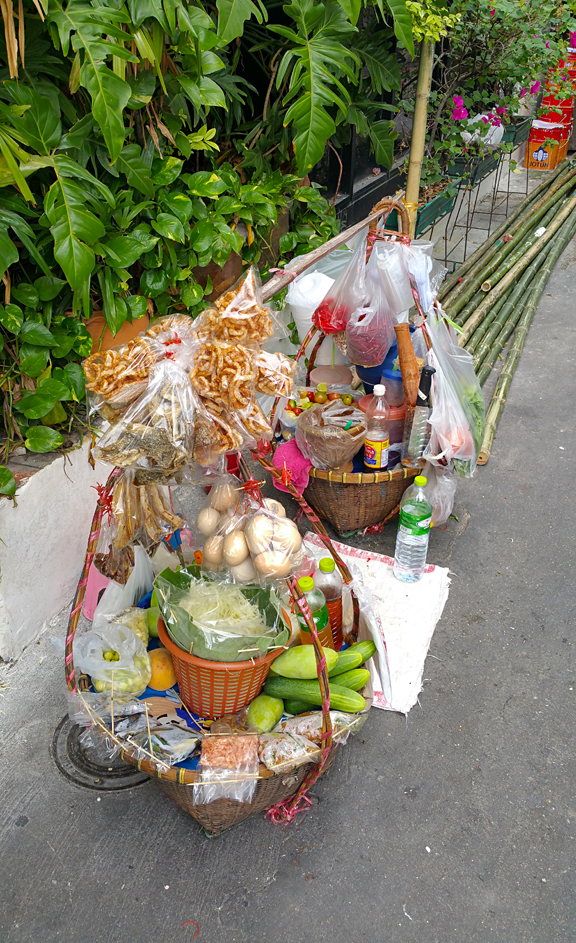 Just the other day as I was on my way to one of my favorite noodle shops in a busy alley on Silom Road in Bangkok, I came across these hawker’s baskets. So I took out my phone and asked their owner for permission to take some photos. The vendor lady, who seemed shy, told me—giggling—that she didn’t want to be photographed but that I could take as many photos as I wanted of her baskets. So I did. Just one photo.

I just wanted to show you what’s in this mobile kitchen.

To put this in a proper context, I should also tell you that, on that day, there was some sort of construction going on at this spot with several men at work. I should also tell you that Silom is a bustling business district in the heart of Bangkok where nearly everything you see—even food at an ordinary, everyday rice-curry stall—would be on the expensive side. Where would construction workers, who most likely earn the minimum wage, go for meals?

But this is Bangkok, which means where there’s demand for food, there will almost certainly be supply. This case is an example: you don’t even need to go look for food; food comes to you.

Honestly, I doubt that the lawyers, financial advisors, and bank executives on Silom are among this lady’s target customers. And, sure enough, according to her, it’s the construction workers in this area, most of whom come from Isan (loud conversations made in the northeastern dialect against the background machinery noises confirmed it), who support her business. To them, she’s a godsend. These workers appreciate the down-home, comforting, familiar dishes that this vendor is capable of customizing on the spot for them. They were flocking around her that day. In fact, had they not graciously stepped away for a moment to let me take a good shot of the baskets, I wouldn’t have been able to get this photo.

This vendor’s specialty is som tam. I have given you a basic recipe here. I have also written a short essay on what som tam is and given you many ideas on what fruits and vegetables you can use to make it in Simple Thai Food. So I’m assuming we already know that even though green papaya is by far the most popular som tam ingredient, it’s by no means the only thing that is used to make this salad. A closer look at what’s in this vendor’s baskets will show you that she’s more than equipped to whip up anything from the most basic som tam to a very elaborate variation. 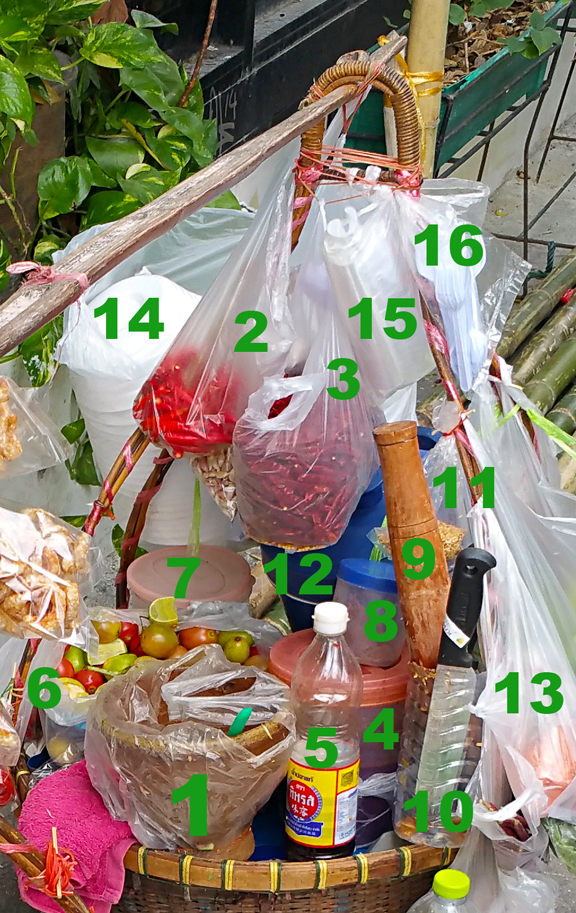 1. A clay mortar. You can’t make som tam without a mortar. (Well, you can, but that’s not how it’s done in a country where a mortar is an everyday kitchen tool.) All the “cooking” she does is done solely in that one mortar.
2. Fresh red chilies
3. Dried red chilies

4. You can’t see what’s in that plastic jar. But I asked, so I know that it’s fermented fish (pla ra), one of Isan’s favorite sources of salinity and umami.
5. Regular fish sauce, the type you see anywhere (she, like Pa Yai, uses Tiparos—I’m not getting paid to say this).
6. A basket of fresh tomatoes and limes. You need these to make som tam.
7. A jar of palm sugar
8. A jar of ground dried red chili powder
9. A wooden pestle (Remember what I’ve told you? You only use a wooden pestle with a clay mortar.)
10. A santoku-ish knife which is pretty versatile. With that one knife, she peels and grates green papayas, mangoes, and cucumbers. She also cuts limes and tomatoes with it. There’s only so much room for gadgets; you need a knife that can do everything. Also, notice she doesn’t have a chopping block. All the peeling, grating, slicing, etc., are done in mid-air.
11. I thought it was peanuts in that bag. But, no, it was toasted rice, the stuff with which you make lap and jaew (jaeo) among other things. It hadn’t been ground yet, and I forgot to ask the vendor why she hadn’t ground it beforehand (a common thing to do).
12. There was warm sticky rice in that blue thermos.
13. An extra bag of palm sugar. Just in case.
14-16. Styrofoam bowls, clear plastic bags, plastic spoons and forks. She’s not going to ask you whether you’d like your food “here or to go.” You see, she herself doesn’t even have a stool to sit on. 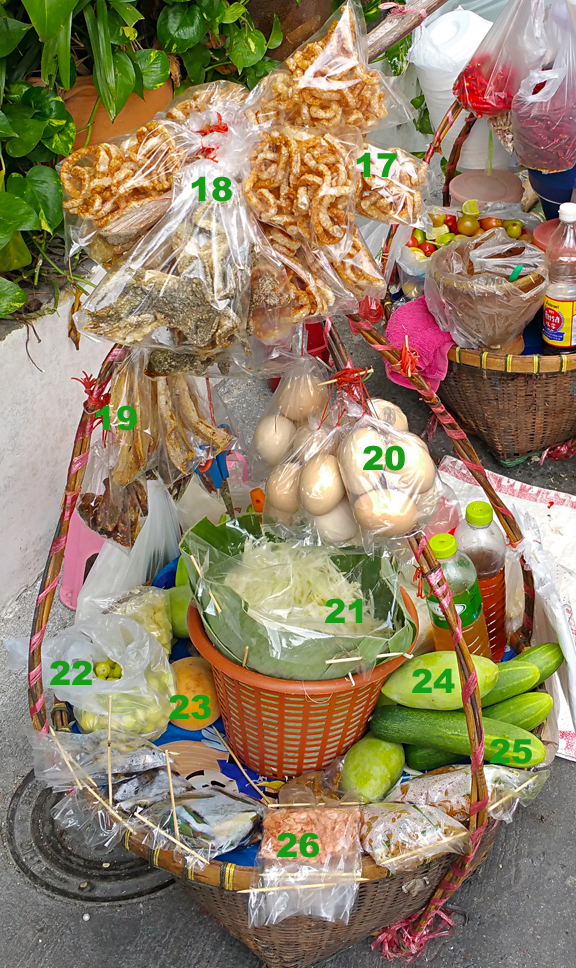 17. Fried pork skins—a pretty popular som tam add-in these days.
18. Fried fish skins—same deal as fried pork skins.
19. Dried fish—ditto.
20. Salted duck eggs. You might have read elsewhere that salting or brining duck eggs is an Isan method of egg preservation, but know that it’s not true. This method of egg preservation is done throughout Thailand. In fact, the best place in the country to get salted duck eggs isn’t even in Isan; it’s in the south! That said, do northeasterners like them added to their som tam? Apparently, yes. Salted eggs, especially the yolks, are another great sauce of both salinity and umami.
21. Green papaya strands, created not with a hand grater but with the knife mentioned above (I’ll show you how someday; it’s not that hard, but takes some practice to get it right). Underneath that banana leaf basket containing the shredded green papaya are skeins of thin rice noodles (khanom jîn), another popular som tam ingredient.
22. Star gooseberries. Very, very sour. Somewhat astringent. The Thai eat them right out of hand. They also pickle and candy them. The Thai name of star gooseberry is mayom (ma-yom) which sounds similar to the Thai word ‘niyom‘ meaning renown, fame, or popularity. So it’s considered an auspicious plant worthy of being included in a Thai home garden. This is not to say mayom doesn’t have its dark side. People in the old days, back when corporal punishment wasn’t frowned upon, often used its long, slender leaf stems to whip their children when they misbehaved. Or could that be the real reason why the older generations liked to plant mayom in their yards? Maybe not. I don’t know. Just thinking out loud.

But I digress. Back to the basket.

23. That’s a lone santol (kra-thon), peeking shyly at you. You can make a spicy salad, like som tam, out of santol as well. If you’ve never had santol, seek it out next time you’re in Southeast Asia. It’s a delicious and very fragrant fruit.
24. Green mangoes—great salad ingredient.
25. Cucumbers—you can make som tam out of them as well.
26. A bag of dried shrimp

Though mobile kitchens, such as this one, aren’t uncommon in Bangkok, ones that come in a form of a set of hawker’s baskets as opposed to a push cart or a bicycle cart, are a rare sight these days. Seeing this one brought back the memories of the mobile vendors of my childhood. It also amazes/impresses me to see how you can roam the streets with a kitchen, a pantry, and a refrigerator hanging on your shoulder ready to make a variety of dishes—on the spot!—for anyone on your path.