By Leela on June 5, 2009 in She Deglutenizes, She Rants and Muses, She Thais, She Tosses 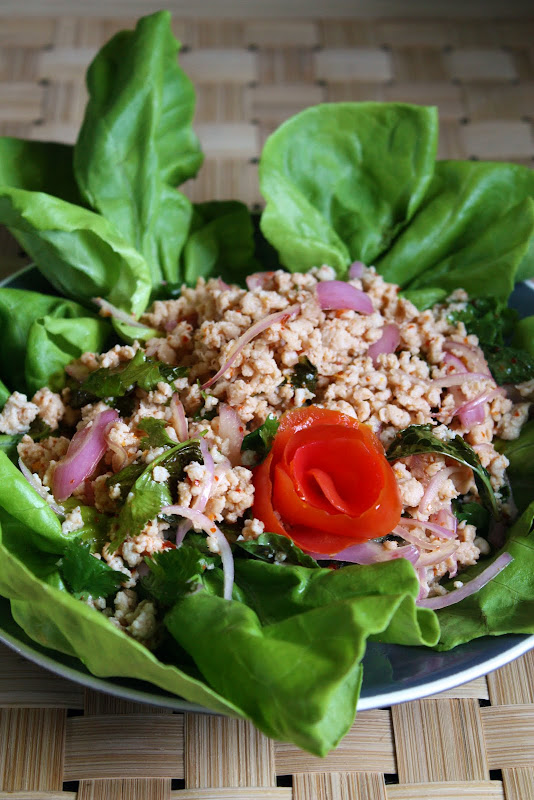 There is a good reason why the title reads the way it does. I am aware that when I show my face here, people expect me to talk about food. But if you know me very well, you will know that, as much as I love food and cooking, the majority of my time is spent in the areas not at all culinary in nature. And though I’ve tried to repress that non-culinary part of me when I come here, it sometimes slips into my site here and there.

Take the dish we have before us here for example. While it may be more appropriate to discuss the anatomy of the dish, the linguist in me just couldn’t overcome the urge to discuss the anatomy of its name. After all, there’s not much to talk about in terms of how to make the dish as you will soon see; it’s one of the simplest things to make. This version that you see here (which represents the most common overseas Thai restaurant version) is especially easy. But the name. (Sigh)

I don’t know if the inconsistencies in the way Thai words are transliterated into English ever drive anyone nuts the way they do me. (I guess this is one of those things where not caring is bliss.) Is it Som Tum or Som Tam, Tom Yum Goong or Tom Yam Gung? I could go on for at least 20 pages with my hypothesis as to why that is the case.

Nonetheless, in an attempt to keep the 7-8 readers that I have, I’ll just give you a one-sentence summary: The complete madness that is the romanization stems primarily from the blatant disregard for correctness and the lack of understanding about how language works and secondarily from the lack of agreement as to whether a word should be transliterated to reflect its vernacular pronunciation or its etymology. 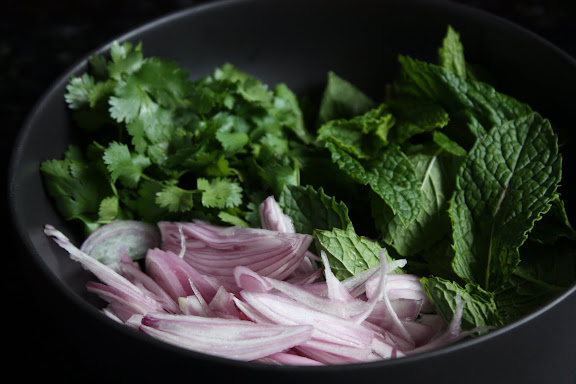 Given the fact that the Thai language has been tremendously influenced by Sanskrit with lots of Old Khmer — among other things — thrown in just to make things hopelessly confusing, unless rules are promulgated and enforced, all hope for uniformity is lost. 1

Back to the subject at hand — ลาบ. The issue here does not pertain to etymology, but the English representation of the long A vowel.

I personally prefer the spelling Lap in strict compliance with the standard transliteration rules (lap kai is the RTGS romanization). But I do realize how unpopular this is. Apart from that, Laab (or Laap) is about as far as I’m willing to go. But I don’t prefer that, because — long story short — I don’t like the idea of reduplicating a vowel to signify lengthening. 2

Lahb is not my first choice, but it doesn’t irritate the heck out of me (in some languages the H is one of those consonants that sometimes function in a vowel-like manner). However, the worst transliteration of this Thai word, ironically, happens to be the one with which you’re perhaps most familiar — Larb (or Larp). 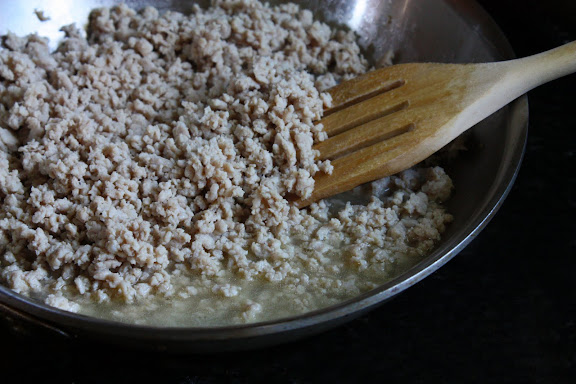 Now that I got you all bored out of your mind, I guess I might as well confuse you too. In absolute disregard for your sanity, I will alternate between these three transliterations of ลาบ in a completely haphazard manner. The reason for this is very practical. Though the linguist part of me sternly insists on Lap, Laap, Laab or Lahb, the blogger part of me is seeking out a way to compromise and sneak Larb into the post.

What’s the point of writing about something on a website like this if it’s not searchable? And I know all too well that only the nerdiest of linguists will search for “lap.” Those who know enough to transliterate the word that way would most likely do a search in Thai anyway.

So as you can now see, the title reads the way it does for a reason.

Now that the issue regarding the name is out of the way, let’s discuss the making of the dish. This will be brief as Laab Gai, Lahb Gai, Larb Gai, Laap Gai, Larp Gai, Lahp Gai, or ลาบไก่, is nothing but a meat-based salad. And being a salad, all it requires is some minor wrist work in tossing things together in a bowl.

Here are the main components: 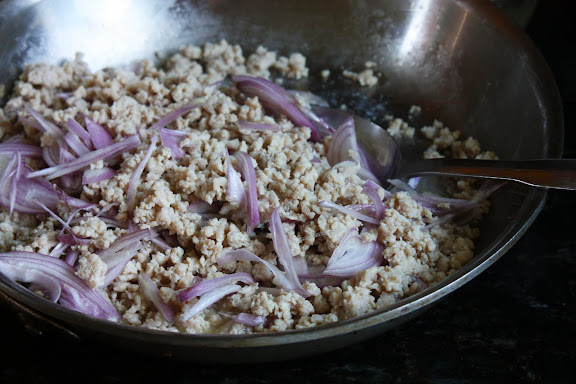 Meat of choice: Chicken is used here; hence the “Gai” in Laab Gai. But Lahb can also be made with beef, pork, turkey, or, my favorite, duck. A combination of meat and offal (especially the kidney and gizzard) is also quite common. (The only kind of meat that would be unusual for Larb is fish or seafood.)

You can buy your meat pre-ground or you can grind it yourself in a food processor. Or you can do what I do when I make Laab. You see, I happen to think that, apart from the incomparable duck meat, the thigh meat of the chicken makes the best Lahb. Unfortunately, the thighs don’t usually come pre-ground. So I buy boneless, skinless chicken thighs, slice them up into smaller pieces on a sturdy wooden chopping block and, with a big Chinese cleaver, whack it until it’s finely chopped.

Then I saute the chopped meat in a nonstick skillet without any oil until it’s cooked through. (Use medium heat as you don’t want any caramelization; you only want to get the meat to go from raw to cooked while keeping as much moisture as possible.) The meat will form large chunks; just separate them with the spatula as you go. Once cooked, the meat should release some of its juices; don’t drain off the liquid. Larb should not be completely dry.

Herbs and vegetables: The non-negotiables in Laab include thinly-sliced shallots or red onions, whole fresh cilantro leaves (better yet culantro or sawtooth coriander), and whole fresh mint leaves. No curly or flat-leaf parsley allowed. Any kind of fresh mint can be used, except the dried variety. No dried onions either. Ideally, dry-toasted fresh galangal is also added. But you leave it out. 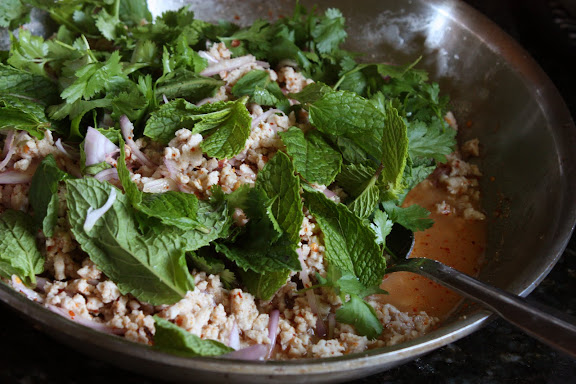 Thickener/binder and perfuming agents: One and only one is needed here — toasted rice powder (Khao Khua). While the galangal is optional, this one is not. This is the ingredient which will cause the juice that comes out of the meat to thicken a bit and loosely bind all the ingredients together.

It’s important to strike a good balance. Too little rice powder will make for a thin, watery Lahb juice. Too much and you end up with slimy meat salad. Khao Khua also helps perfuming the dish. Laab is not Larb (or Lahb) without that familiar “nutty” aroma of the toasted rice. Don’t leave this ingredient out.

Seasonings: Three things are needed — fresh lime juice, fish sauce, and dried red pepper flakes/powder. Nothing can be left out or substituted, unfortunately. No lemon. No bottled lime juice or, worse, vinegar. No salt. And — heavens forbid — no soy sauce. The good news, though, is that you have complete freedom when it comes to the amounts of these three seasonings. The recipe below serves as a guide for those who have never had or made it. Ultimately, you’re responsible for tasting and adjusting until the dish tastes right for you. 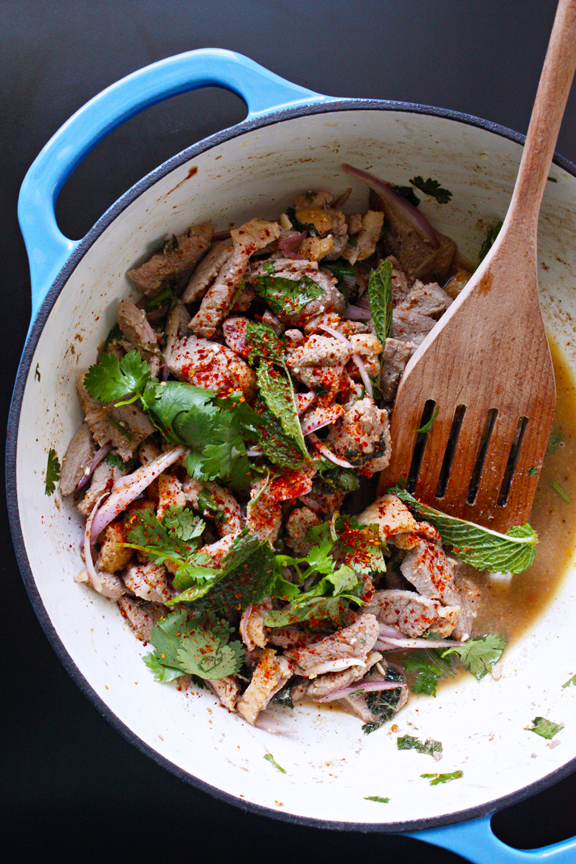 Duck laab — of all the meat candidates for laab, duck is my top favorite.
Assembly: Now that you’ve got all your individual components ready, it’s time to toss the Lahb. (Assembly should be done no more than 5-10 minutes before it’s served. Laab, like most tossed salads, tastes best when it’s freshly made. Its taste deteriorates quite quickly. You can store the leftover in the refrigerator, but the reheating will pretty much ruin the taste and texture of this type of Larb.)

Allow the sauteed meat to cool down a little. It should not be fresh-off-the-stove hot, but a bit warmer than room temperature (Larb tastes best at room temperature). Place the meat and its juices in a mixing bowl. Then add to the meat bowl, the shallot or onions and toss. The residual heat from the meat will slightly wilt the raw shallots and tame the raw flavor. Then start seasoning your Laab with the lime juice, fish sauce, and dried red pepper powder. The taste should be predominantly sour and a bit salty. The level of heat is completely up to you. Once the desired taste is achieved, throw in the fresh herbs and toss.

What I’ve just described to you is merely a set of guidelines. Here’s a recipe for those who need it.

By the way, Mike at Dad Cooks Dinner has come up with a modified turkey laap. Read it here.

1 If anyone has been to Thailand recently, you’re probably aware of the name of our international airport Suvarnabhumi. This is an example of an etymology-based transliteration. Had the name been transliterated to reflect the vernacular pronunciation, it would have looked entirely different. Just by looking at the spelling, can you even tell that the name is to be properly pronounced, su-wan (rhymes with “sun”)-na-poom? No literate, sane Thai will ever go around calling the airport Soo-var-na-bhoo-mee. Would you be a little confused to find out that the name of our former prime minister, Abhisit Vejjajiva, is properly pronounced, A-pi-sit Wait-cha-chee-wa? It may seem misleading, but you can see the etymology-oriented philosophy behind such a transliteration. The name of another former prime minister, Thaksin Shinawatra (pronounced Tak-sin Chin-na-wat), on the other hand, is a confused hybrid of both etymology-oriented and vernacular-oriented philosophies. It’s both and, yet, it’s neither. I’m sure it works for him.

2 The Thai people have an informal way of employing the English letter R to indicate the lengthening of vowels. Each short vowel in the Thai language has its long counterpart; everything comes in pair. So in order to indicate that the vowel in the word ลาบ is a long A as in “fAther,” an R is added to signify the lengthening of the vowel. Though utterly without any linguistic basis, it is a very prevalent practice — so prevalent that it has more or less become the standard.

By introducing an extra consonant, i.e. the R, into the mix, it is bound to lead people, especially Americans, to pronounce the word with the rolling R just as they do the word, “garb” when there is no R represented anywhere in the original be it in the spelling or the pronunciation. And this is primarily the reason I don’t like the use of the English R as the marker of long vowels; it brings into the mix an extra consonantal element where there is none. Would a classicist ever dream of using the R to differentiate the English transliterations of the omicron (Ο – short o) from that of the omega (Ω – long o)? Never.
Coconut Rice with Chives: How to Make Fluffy Coconut Rice
How to Make Khao Man Gai ข้าวมันไก่: Thai Version of Hainanese Chicken and Rice