By Leela on June 15, 2009 in She Deglutenizes, She Drizzles and Smears, She Fries, She Thais, She Tosses 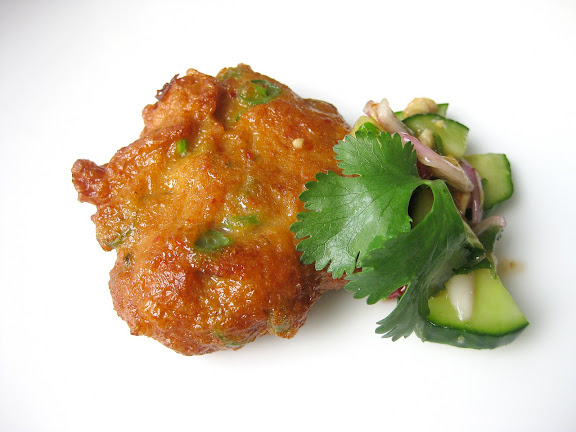 Tod Man Pla (or Tawd Mun Pla, Tod Mun Pla, Tod Mun Pla thanks to the madness of Thai-English transliteration which, of course, affects the name ทอดมัน or, when fish is used, ทอดมันปลา, here is one of the most prominent appetizers on most Thai restaurants’ menus. The longevity of this old-fashioned dish’s popularity speaks volumes about its greatness.

Our family has a great recipe for Tod Man Pla which I can’t share lest my aunts and uncles smack me up the head next time I visit home. One of my aunts has a degree in culinary arts and her red curry paste recipe is the best I’ve ever had. Her curry paste combined with fresh water fish , Pla Grai (ปลากราย), makes for the best fish cakes. It’s one of those recipes that you just do not mess with; it’s already perfect. But the one I’m sharing here is about as close as can be to what I grew up with given the ingredients available outside of Thailand.

It is unfortunate that Pla Grai, traditionally used for fish dumplings and fish cakes in Thai cuisine due to its firm flesh, isn’t available fresh in the US. Back home we’re spoiled by freshly-grated Pla Grai flesh which we can get at any good market. No such thing in Chicago. I have tried using frozen whole Pla Grai, but it didn’t go too well. Not only did my kitchen smell like a fish exploded in it, the texture of frozen Pla Grai has rendered the death of that fish completely useless. Once frozen and thawed, the flesh loses its famous elasticity. (My guess is that it’s probably not that fresh to begin with prior to being frozen.) 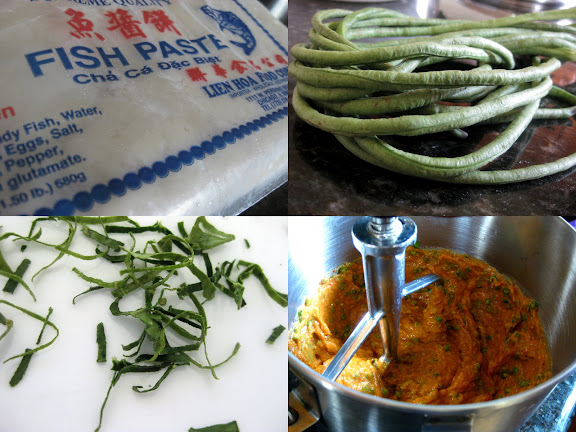 Prepared fish paste, in 1.5-lb packages, should be available at any large Asian grocery stores in your area. They’re usually tucked away in the back of the freezer, though, so you will have to put some effort into looking for them. Be forewarned that it’s not a single ingredient; seasonings and fillers have already been mixed into it. Some brands have tapioca starch added. Some have salt and pepper added. And some even have egg whites. But when it comes to Tod Man Pla, the varying formulae make little difference.

Good Thai fish cakes must be well-seasoned and have firm, bouncy texture. The seasoning part is easy. We just use prepared red curry paste (for those who look for a more difficult way to make Tod Man, you can make your own red curry paste). In fact, that’s the only thing I add to the prepared fish paste to season it. Chiffonade of fresh kaffir lime leaves and sliced Chinese long beans or regular green beans, are also added.

But the secret is this: in order to replicate the texture of the traditional main ingredient, Pla Grai, some egg whites are added to the fish paste mixture. The albumin in the egg whites creates the elasticity characteristic of good Tod Man Pla. Then last but certainly not least, since the bouncy texture is everything, the fish paste must be whipped until it becomes very viscous. In my family we have an heirloom terra cotta bowl in which we stir Tod Man paste with a wooden spoon in the same direction for at least 20-30 minutes. Here in Chicago, I let my KitchenAid mixer and its paddle attachment do the work for me. I’m lazy.

The fish cakes are best served immediately along with a bowl of cucumber relish. (But they can be frozen and thawed/reheated for later as well.) You can have these as an appetizer, but I eat my Tod Man with rice. Jasmine, of course. 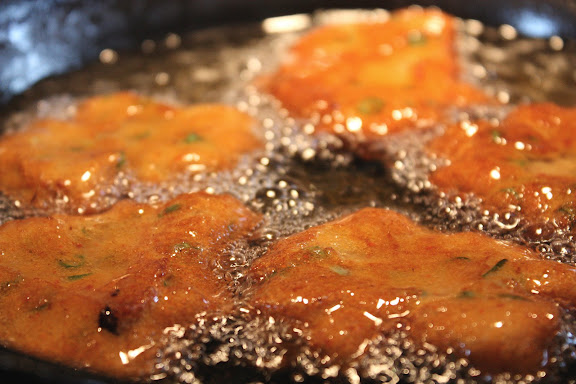 Print
Prep time
20 mins
Cook time
10 mins
Total time
30 mins
This is a recipe for classic Thai fish cakes as you will find on the streets of Bangkok as well as family restaurants and rice-curry shops. The post includes tips and tricks on how to make chewy, bouncy fish cakes using ingredients you can find in the US.
Author: Leela
Recipe type: Main Dish, Entree, Meat, Appetizer
Cuisine: Thai
Serves: Makes 30 two-inch fish cakes
Ingredients
Instructions
Notes
For the cucumber relish: (Mine is a cheater’s version. You don’t even have to make a vinaigrette for this. If you’re a Thai food fan, I assume you have some Thai sweet chilli sauce in the refrigerator. Just use that as the base of your cucumber relish.) Mix together ¾ cup Thai sweet chilli sauce, store-bought or homemade, ½ cup thinly sliced cucumber, 2 tablespoon finely chopped dry-roasted peanuts, 2 tablespoon coarsely-chopped cilantro leaves, and 3 tablespoon thinly sliced shallots or red onion. Keep chilled in a covered bowl.
Wordpress Recipe Plugin by EasyRecipe
3.1.02

Now , the classic shape of these fish cakes is flat and round with roughly 2 inches in diameter. However, , with some creativity, you can make fish cakes in various, though not at all random, shapes. (Notice the zoology, paleontology, and geography themes? If I hadn’t accidentally eaten Einstein’s head, we would have gotten the Nobel Prize winner theme also.) 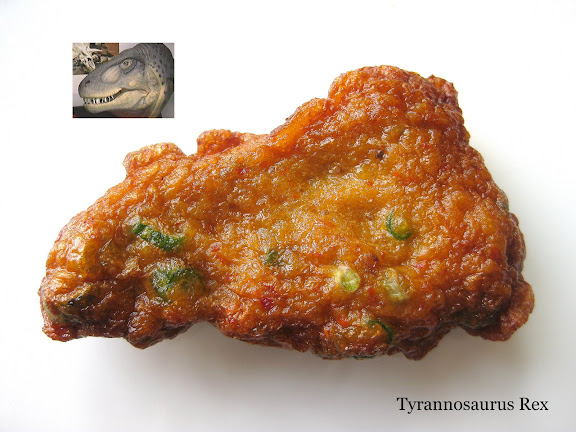 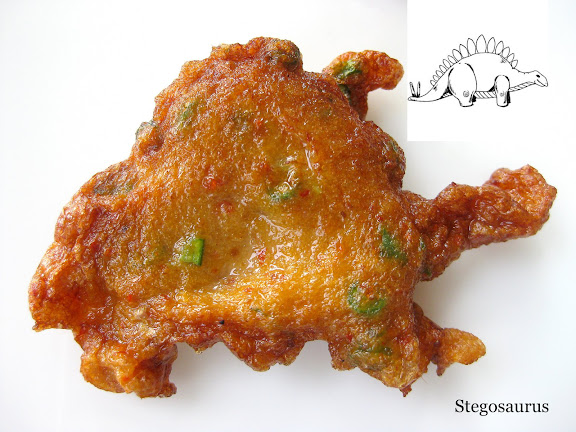 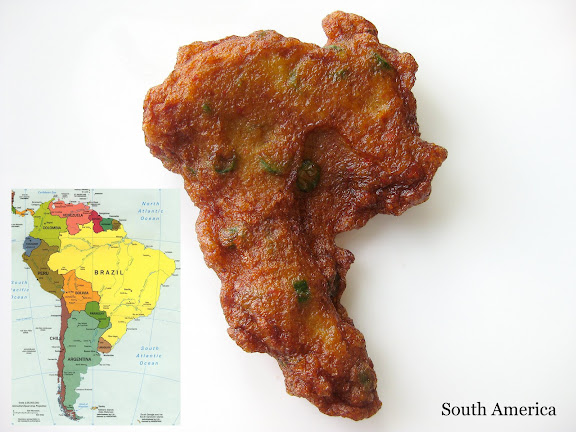 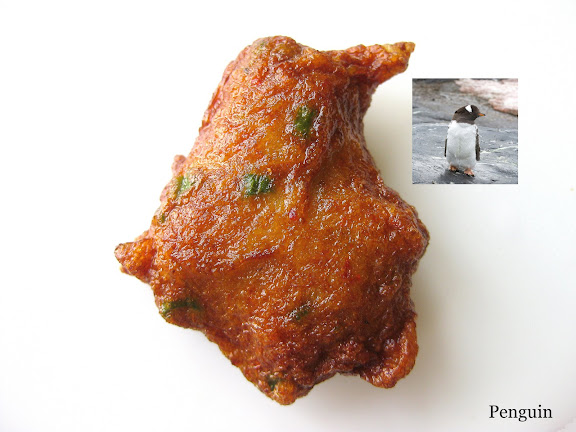