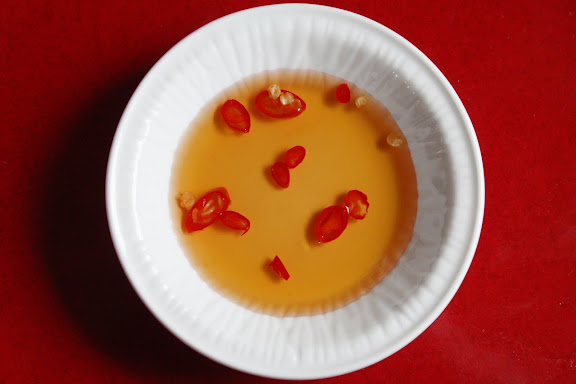 This simple table sauce is so commonplace — lowly even — in the Thai households that it’s almost ridiculous for me to blog about it. A blog post on this sauce is in many ways like a blog post on table salt and pepper. And I bet this post, just like a few similar ones in the past, will bring my way many have-you-run-out-of-stuff-to-blog-about-HUH? email and voice messages from my friends and family in Thailand.

My only justification is that although nam pla prik(RTGS: nam pla phrik), or sometimes called prik nam pla, is considered ordinary, its presence cannot be ignored. This meal accompaniment is one of the most ubiquitous items in the Thai cuisine. Everywhere you look, you see it. On make-shift tables set up by street food vendors. On the tables of sit-down type of restaurants. On your family dining table. On the seasoning table in every corner of every food court. In a tiny bowl that comes with the plate of fried rice you order. In a little rubber band-fastened plastic bag nestled inside your fried rice to-go box.

You see it everywhere.

I was tempted to call it a dipping sauce, but that somehow feels weird to me as it’s not something we dip stuff into in the manner of buffalo wings and bleu cheese dip. If anything, nam pla prik acts more like a flavor enhancer (mainly for rice or rice-based dishes). You take a spoonful of it and drizzle over or mix into whatever it is that’s on your plate. If your fried rice is a little bland, or could use some heat, a dab of fish sauce and a few pieces of fresh chilies would be of tremendous help. Sometimes, having a little bit of the vibrant kick of fresh chilies along with rice and curry makes for a very pleasant meal.

Most Thai food vendors aren’t so sensitive when it comes to the customers adding seasonings to their food; most of them don’t take it personally. If anything, they seem to encourage self-customization. Anyone who has eaten street noodles in Thailand is familiar with the seasoning set that’s always there on the table for people to use, not to visually admire from afar or meditate on as you eat your noodles.

When my mother was alive, if we had invited any of you guys to our house for a meal, I can assure you that the infamous Joy Luck Club scene, where the (Chinese) mother is greatly insulted by her daughter’s (white) boyfriend naïvely adding soy sauce to her signature dish, would never happen at our house. The members of my entire clan, thankfully, are beyond laid-back. My mother would’ve definitely put a bowl of nam pla prik in the middle of the table for everyone just in case. And if you actually used it, she would never have taken offense.

I’m not much of a nam pla prik addict in the sense that I don’t automatically add it to everything that’s put in front of me. I only use it when it really makes a difference. In fact, I can only think of one thing that I refuse to eat without a bowl of nam pla prik nearby: rice and soft- or hard-boiled eggs. Take nam pla prik away from the picture and the whole thing becomes pointless to me. Nothing else can take the place of nam pla prik in that situation, not even my beloved Maggi or Sriracha. But in most situations, I can easily get by without it.

Each person approaches the stuff differently, though. Many consider nam pla prik to be the side item without which a meal is not complete. Someone I know can get really cranky if she makes herself a bowl of rice topped with crispy fried eggs and sits down to enjoy it only to find the last person who finished the last batch of nam pla prik didn’t replenish the stock. This could cause friction in the household.

Each person (or family) has his own idea of what nam pla prik consists of. I’m a minimalist, so as long as there are thin slices of fresh bird’s eye chillies floating happily in a pool of aromatic fish sauce, I’m happy. In fact, I would say that those two components are the bare essentials of nam pla prik., i.e. as long as you have fish sauce and fresh chillies, you have nam-pla prik. After all, the name nam-pla prik is made by sticking two nouns together: nam pla (fish sauce) and prik (chilli). But it wouldn’t be uncommon to see sliced garlic or shallots floating in there as well.

Try asking for nam pla prik next time you visit a Thai restaurant and look for that subtle ah!-you-eat-like-we-do expression on your server’s face. And if they actually give you a bowl of it gratis, please tip them well and support their business for that is a sign of hospitality — of them welcoming you into their “home.”