By Leela on August 26, 2010 in She Deglutenizes, She Tosses, She Veges 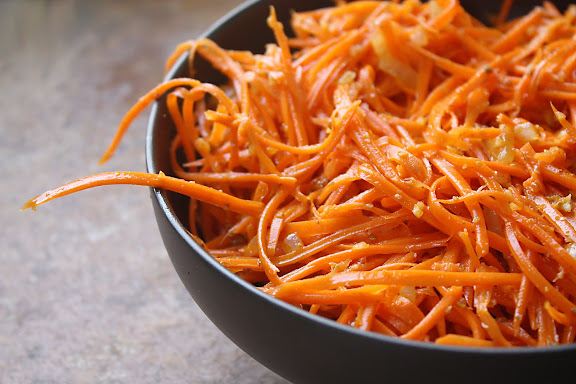 This “Korean” carrot salad is found all over the area that is the former Soviet Union. I certainly saw it popping up here and there during my travels in Ukraine and its environs; I just never paid attention to it or cared to find out what kind of carrot salad it was. Why would I dedicate the space in my digestive tract to a carrot salad, which I could have gotten anywhere, when I could gorge on local vareniki, Baltic sprat sandwiches, and golubtsi?

And so it wasn’t until last winter when I visited a local Kyrgyz restaurant, Jibek Jolu, recommended by Mike Sula of the Chicago Reader, that I came to realize how wrong I was. A dining companion ordered a Korean salad, and I mentally rolled my eyes. Who in their right mind orders a Korean salad at a Kyrgyz restaurant? Well, the salad came, and it looked so tempting that I, in all my glorious hypocrisy, had to mooch a bite. It was a life-changing experience.

As it turns out, “Korean” salad is more Russian than Korean (kind of like how American Fried Rice is strictly a Thai dish) and most likely the Russian interpretation of something else that originated in East Asia. The history of this dish is largely based on oral traditions which are often conflicting. Even its presumed Korean origin cannot be ascertained with any degree of certainty for “Korean” may very well be used here as a synecdoche to refer to the entire East Asia. One thing is quite certain: the Silk Road was the responsible party.

Whatever the original looked like, after having traveled from East Asia through Anatolia and all the way to Eastern Europe, the dish had become something quite different by the time it became a staple in the Slavic as well as the Central Asian cuisines. Russian “Korean” salad*, or Корейская Морковь (literally, “Korean carrots”), is a marinated salad with fresh carrot as the main ingredient. The dressing is a simple vinaigrette spiked with the mandatory fresh garlic, coriander seeds, and cayenne pepper.

This salad tastes great by itself. It is also wonderful with — believe it or not — coconut rice.