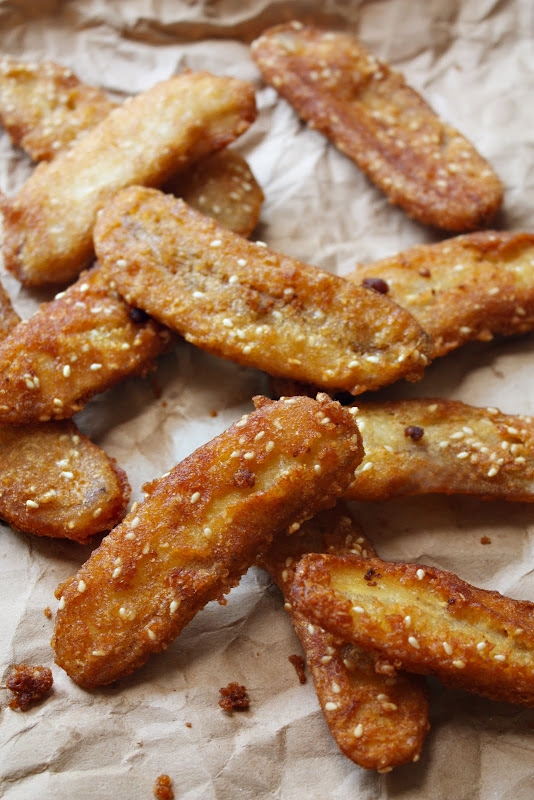 There are some who insist that street foods can be replicated at home easily. I disagree. That may be true for some of the very rudimentary dishes. But for the majority of street foods masterfully made by skilled cooks, successful home cloning is an elusive endeavor.

In a perfect world, our favorite street foods would be prepared at home easily and quickly, with home equipments, without specialized skills, in a cost-effective manner, and with equally great or greater results. I could be wrong, but I doubt we live in that world. I have more to say on this topic. But that’s for another occasion, another blog post.

People with no issues, I figured, would begin their post on these delicious Thai fried bananas (กล้วยแขก or กล้วยทอด) with something a lot more upbeat than the previous paragraph. After all, it’s batter-fried fruit we’re discussing here, not the state of US economy. Yet, haunted by the ghosts of fried bananas past, the writing of this post has not been easy for me.

If you remember my earlier post on Thai Fried Sweet Potatoes (มันทอด), you remember GFB, a genius-cum-tyrant of a woman whose fried-food headquarters stood a few blocks from my grandparents’ house in Bangkok. I believe I have more than adequately explained how her modus operandi, when it comes to conducting business or customer service, highly resembles that of the Soup Nazi, comically portrayed in a famous Seinfeld episode.

How did someone like GFB, whose personality was so acerbic that lemons worldwide collectively called her Mommy, manage to run such a successful business?

Her stuff was good and she knew it.

She also knew that 1. you could not make it at home, at least not as well as she did, and 2. you might swear off her stuff in protest, but soon you would come crawling back just as you (and perhaps your immediate ancestors) had done before. If it were true that making great Thai-style fried bananas is just a matter or taking a bunch of bananas – any kind of bananas – splitting them in half lengthwise, dipping them in batter, and frying them up crispy and golden brown, someone like GFB would never be able to come to think of herself as a fruit-frying anthropomorphic of a deity.

“Simple” things are, in fact, some of the most difficult things to master.

With the bar having been set so high early on in my life, I find myself incapable of adopting a casual, carefree attitude when it comes to fried bananas. This recipe has been tested multiple times, yet I keep thinking it won’t be good enough. If I’d never before in my life tasted GFB’s fried bananas, her flagship product, her core competency, I would not have been so stricken by what may seem to others irrational, unprovoked fear. Making and eating these fried bananas in the privacy of my own kitchen is one thing, but blogging about it? (Stabbing self with a horse tranquilizer syringe …)

Actually, if I listen attentively enough, I think I can hear GFB taunting and laughing at me in the background as I’m typing this.

Having said that, this recipe is my best work to date. It does not produce the exact same fried bananas made by GFB, but I think, for a mere mortal, I haven’t done too badly. 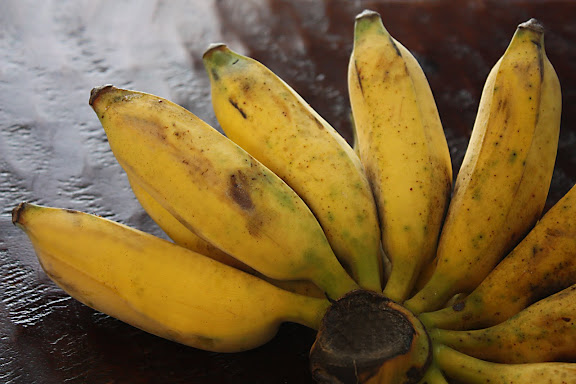 Burro bananas — short, straight, round, with squared-off ends
One thing needs to be said right off the bat: the only type of banana that is used to make traditional kluay khaek/kluay tod* is Burro banana (กล้วยน้ำว้า) which is one of the most common — and the most loved — varieties in Thailand. I didn’t make this rule; I’m just reporting fact. If you’ve been to Thailand and fallen in love with kluay khaek, by following a recipe that calls for regular Dole bananas (Cavendish), you’re not going to end up with the kind of street fried bananas you’ve had in Thailand. Of course, if you don’t aim for exact replication, you can use any type of banana. But if you really, really want to make the kind of kluay khaek sold on the streets of Thailand, you need to seek out Burro bananas. A trip to a local Southeast Asian or Hispanic market may be in order.

Choose ones that are not too ripe. They should be yellow all over with the tops still a bit green. Burros at this stage of ripeness, in my opinion, make for the best frying bananas; they result in banana fritters that are sweet but still quite firm and not mushy after having been fried.

Burro bananas are shorter and straighter than Cadenvish bananas, the main commercial cultivar. They are starchier and a bit more acidic. Being harder to find, they’re a bit more expensive than your everyday Dole bananas. I guess due to the scarcity and the higher cost of Burro bananas, Thai restaurants overseas have taken to using Cavendish bananas as a substitute, cutting them crosswise into chunks, covering them up in thick batter in the style of western fruit fritters, and serving them with ice cream, whipped cream, or honey. If that’s the version of Thai fried bananas or Thai banana fritters you’re familiar with, you may be interested in knowing that those are not the fried bananas you find on the streets of Thailand. Delicious they may be; kluay khaek they are not.

Thai fried bananas in their most common form are thinly-sliced Burro bananas, lightly covered with a batter made of rice flour or a combination of rice flour and wheat flour, finely-grated mature coconut and white sesame seeds. This batter makes for a thin, light, and very crispy crust as opposed to thick, fluffy, and cake-y. The flavoring agents are already mixed into the batter so that the banana fritters can be served unadorned as it has been done for ages, i.e. no honey, no whipped cream, no chocolate sauce drizzled on top.

Since the batter is on the thin side, it doesn’t adhere to the banana pieces as well as the western-style fritter batter (think corn dogs or apple fritters) would. That means you have to work quickly; dip, coat (on all sides), and drop (into the oil). The batter-coated banana slices will drip beads of batter all the way from the batter bowl to the hot oil. These little beads — the ones that fall into the oil — become tiny super crunchy goodness at the bottom of the fried banana bag — something my grandfather has been known to reach for even before he gets to the fried bananas themselves. 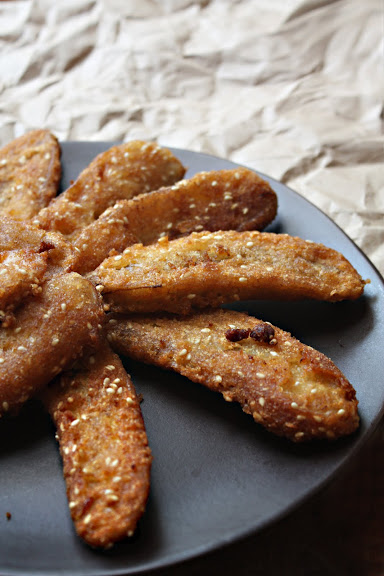 The banana is supposed to remain somewhat visible through the thin crust. Just by looking at the finished product, you can tell the work of an okay fried banana vendor from that of a very good one easily. True, Thai fried bananas involve a batter, but the banana remains the star of the show. That is to say, though the crust is important and indispensable, by no means should the thickness of the crust exceed that of the banana. The somewhat thin batter produces just enough coating to ensure surface crispness, not to mummify the banana. The exterior is supposed to be jagged and uneven around the edges, not smooth and puffy; it’s also supposed to possess long-lasting crispness.

Long-lasting crispness? How long? How do you achieve that?

As for the longevity of the crispness, until I conduct a thorough study, I can’t say for sure. However, I called my grandfather last week and we tried to figure out, based on our collective memories, how long GFB’s fried bananas stayed crispy. Approximately 4-5 hours after the fried bananas had left the oil, we both concluded; that is, if we didn’t close the opening of the bag thereby inadvertently trapping the steam inside. (Sorry about the unscientific approach.)

As for the crispness, it is attributed to three factors:

* Without a doubt, old-fashioned Thai fried banana batter contains Calcium Hydroxide (Ca(OH)2) or limestone-derived slaked lime which is a traditional firming, crisping agent. I have recently written a separate post on limestone water (a bit of a misnomer, but that’s the common name) or น้ำปูนใส which explains in what form it exists in the Thai culture and how it is used in the Thai cuisine.

* If you can find Thai red limestone paste, by all means, prepare the limestone water as explained in my earlier post and use it in this recipe according to the instructions below. If not, baking soda makes for a good substitute. Sodium Bicarbonate (NaHCO3) or baking soda and Calcium Hydroxide are both alkaline.

* But since the latter is more of a firming agent and the former more of a leavening agent (source), baking soda doesn’t really stand up to limestone when it comes to degree or duration of crispness it produces. But perhaps that won’t be such a huge issue since these fried bananas should be consumed while they’re warm anyway.

* The use of baking soda in lieu of the more traditional limestone also has its benefits. Being a leavening agent, baking soda produces tiny little bubbles which make the coating more airy and delicate than limestone would. For the batch shown here, I decided to use baking soda instead of limestone to see what would happen. As you can see in the photographs, though the coating isn’t thick and puffy, it has an airy, lace-y look to it. With limestone in the batter, the coating stays flatter against the surface of the banana. Both are good. 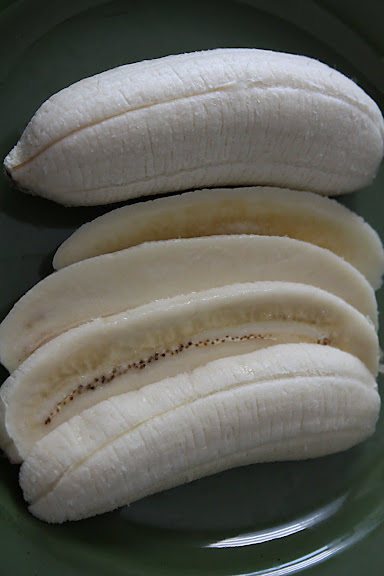 * Thinner and alkaline-fortified batter is just one factor when it comes to crispy fried bananas; the preparation of the bananas also plays a very important role. As mentioned above, moisture in the form of steam (as in you put hot fried bananas in a bag then close it tight) kills crispness. Moisture inside the bananas, trapped within the coating, also contributes to the lack of crispness or short-lived crispness. Basically, the thicker the banana slices, the more moisture gets trapped inside the coating.

* Veteran fried banana vendors take great care to slice their Burro bananas quite thinly, approximately 0.5 centimeter or 1/4 of an inch in thickness. You should get 4-5 slices out of an average-sized Burro banana. That way, you get two “curvy” end pieces which are a bit moister (“the dark meat”) and at least two “flat” pieces that are drier and crispier (“the white meat”). There are those who prefer the curvy pieces, those who prefer the flat pieces, and those — like me — who’ll eat anything.

* A thoughtful and considerate street vendor, without you uttering a word, will be kind enough to mix both the center slices and the end slices for you. You could make your preference known, but that should not be done without you having built a strong rapport with the vendor. Unlikely as it may be, if you happen upon a vendor with GFB’s temperament, an innocent act of specifying which pieces of fried bananas you want could result in you leaving the stand in a hurry, banana-less and with verbal insults echoing behind you.

* Another thing that destroys crispness is the excess oil that gets trapped inside the fritters. To prevent this, make sure you heat the oil to the frying temperature of 350° F and refrain from frying too many pieces of banana at the same time. Warm fried bananas should not be covered as the steam will cause them to lose the crispness. 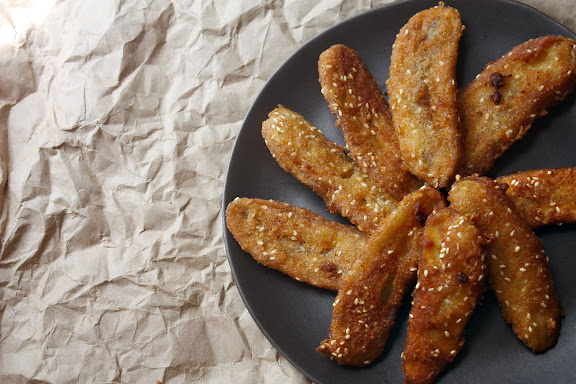