By Leela on September 22, 2010 in She Deglutenizes, She Stocks a Thai Pantry, She Thais, She Uncooks, She Veges 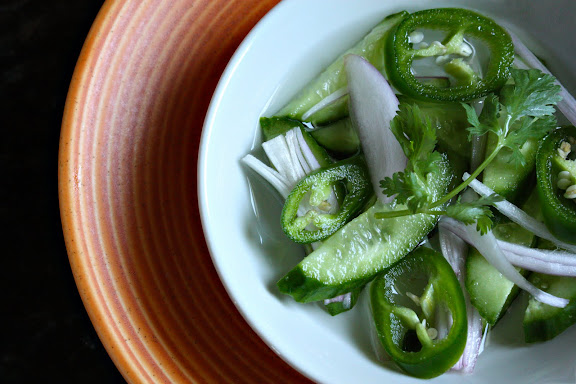 Since it took me 10 minutes to make a bowl of this flash-pickled condiment, I thought the writing of this post was going to take 30 minutes at the most. I would snap a few pictures of the cucumber relish, post them on here, write a couple of paragraphs, and move on with my life. Boy, was I wrong.

Little did I know that the whole “30 minutes at the most” thing would turn into hours of research on the etymology of the Sanskrit name अचार (achār, whence the Thai “ajat,” “achat,” or “ajad” (อาจาด) comes (most likely via Malay and/or Indonesian). Knowing that the name of this condiment and the condiment itself have been adopted into the Thai language and cuisine respectively (either by way of our southerly neighbors or foreigners living amongst us) wasn’t enough. I had to find out what the Sanskrit means literally, whether the origin can be traced back to languages outside the Indo-European family, how it might be related to the Persian and Urdu آچار (âčâr), etc.

Six hours later, I was lying face down on the floor, spread-eagle, surrounded by 5-6 dictionaries (all proven useless), mentally spent, and still as unenlightened as I was when the research began. Other than the fact that the word has been used within the Indo-Aryan and Indo-Iranian sub-groups of the Indo-European family as a generic name for pickle, I didn’t get anything else out of all that reading.

But life must go on even though I’m still in the fog. So with nothing earth-shatteringly enlightening to offer you, here’s the scoop: