By Leela on May 20, 2011 in She Deglutenizes, She Stocks a Thai Pantry, She Thais, She Uncooks, She Veges 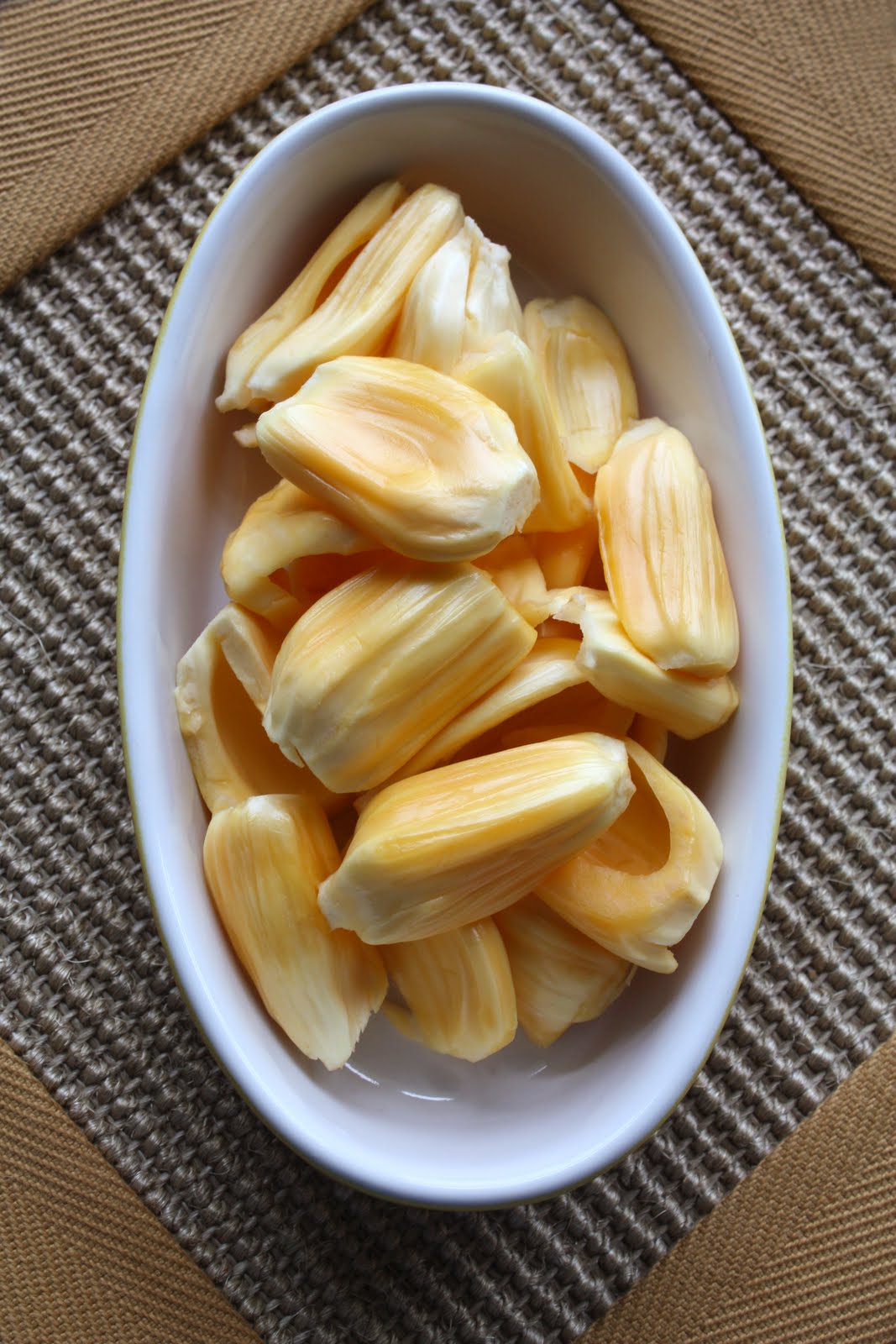 It used to be that once in a while hunks of fresh jackfruit would pop up randomly at some Asian and Hispanic markets in my neck of the woods causing me to mentally squeal with delight at such a rare sight. Most of the jackfruits you see in the US, according to my produce guy, come from Brazil. And though it bums me out a bit that the flesh of this cultivar is harder and much less sweet than that of the main cultivar found in Thailand, I’m too excited about having fresh jackfruits at all to complain about anything.

Nowadays, I’ve noticed that jackfruits are showing up at mainstream supermarkets in the US with higher and higher frequency. If you — perhaps out of curiosity — have bought, or are thinking about getting, a section of jackfruit, but don’t know what to do with it, I hope this post will help somewhat. 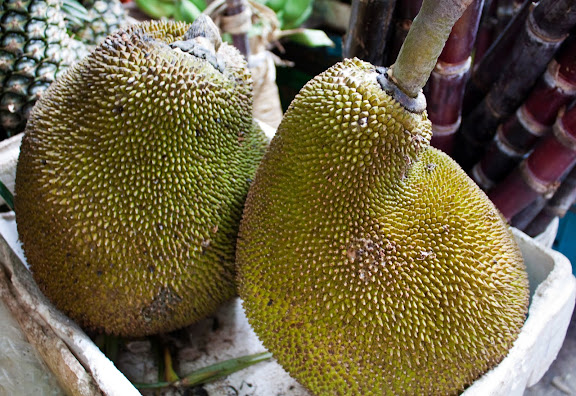 Whole jackfruits – these are considered smallish.
Truth be told, I’d never prepared a jackfruit growing up. I never had to do it. In Thailand, even though whole jackfruits can be seen all over town, rarely do people buy them whole and dissect them at home. The fruits are too big — not to mention prickly — to schlep around, and the process of separating the edible part out of the inedible is laborious and messy. Most, if not all, of the time, jackfruit vendors take care of the preparation and pack the edible flesh neatly in a box for your convenience.

Back then, even if I wanted to learn how to prepare a jackfruit, I never had a chance to do it. My grandparents had one jackfruit tree in their home2, but for some reason, we never let them grow into full-sized jackfruits; we always harvested them while they were still young and turned them into various savory dishes.3 And preparing a young jackfruit for cooking is entirely different from preparing a fully-developed and ripe jackfruit.

But it’s actually not that hard. Besides, your supermarket most likely sells jackfruits in 6- to 7-lb hunks like this which makes things much more manageable. 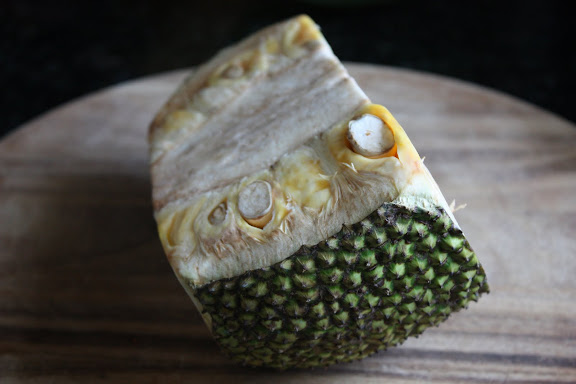 All you have to do is lubricate your hands with some vegetable oil. Jackfruit is very resinous, and the sticky substance is hard to remove even with soap and warm water. Also, by no means should you do this while wearing your favorite clothes. 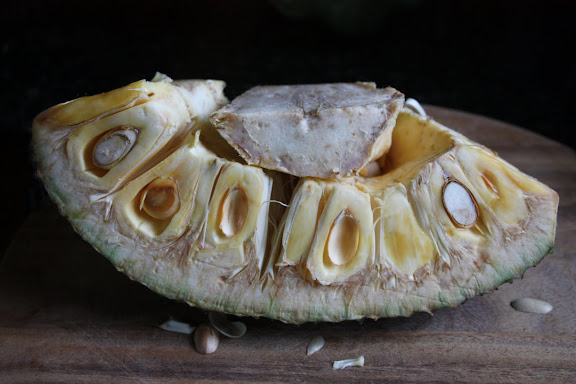 Start off by removing the core by running the blade of a sharp knife along the core line. This is what holds the edible jackfruit pods together, and you want to set the pods free. The line between the core and the pods is very visible; you can’t miss it. 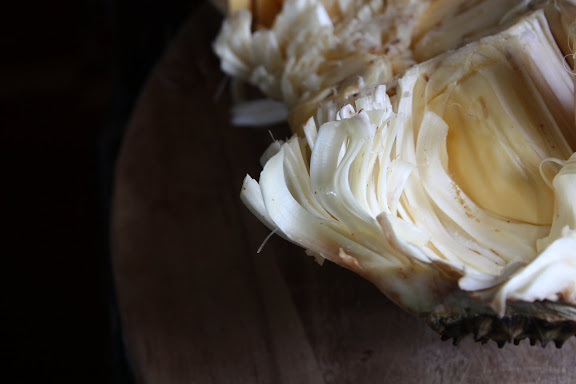 Once the core is removed, you’ll see the edible yellow pods that have these fibrous strands that look like sea anemones wrapped around them. 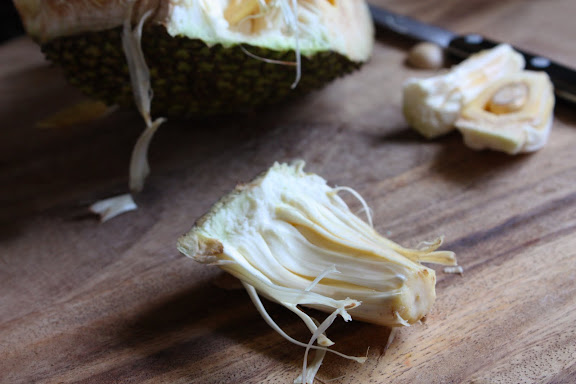 With the help of a paring knife, remove the white strands and trim off the part that connects the pod to the prickly skin. 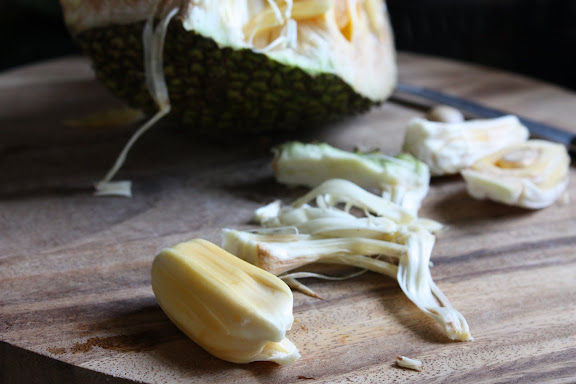 What you have now is a jackfruit pod, all trimmed and almost ready to eat. There’s only one more step left before you can pop one into your mouth. 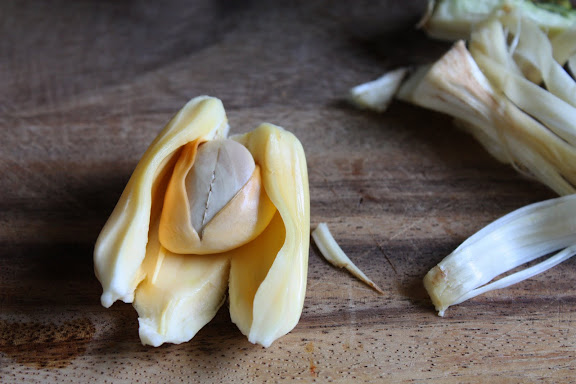 Make a slit lengthwise along one side of the pod, exposing the pit that is attached to the bottom of the pod. Go around the pit base with your paring knife to separate it from the edible flesh. Be sure to remove the rubbery skin around the pit as well.

Don’t throw the pits away, though. Boil them for 20-30 minutes until they’re soft and eat them like you would roasted chestnuts. Delicious. 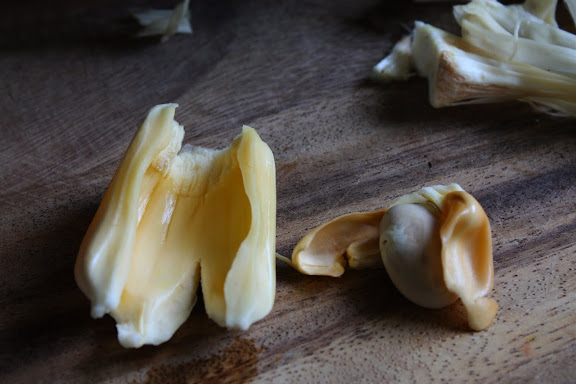 Now your jackfruit flesh is ready. You can eat it right out of hand. You can cut it lengthwise into thin strips and add them to various shaved ice desserts, e.g. Tab Tim Grob (mock pomegranate seeds in coconut cream). You can cut it a little more finely and fold it into Thai-style coconut ice cream. So many delicious possibilities.

Fresh jackfruit flesh can be stored in an airtight container, lined with a piece of paper towel, up to 3 days in the refrigerator. It can also be frozen. However, the texture changes somewhat once it’s thawed.

1 Jackfruit is one of those auspicious trees that people like to grow in their homes. This is due to its Thai name Kha-nun (ขนุน) the second syllable of which is homophonic to several Thai words with positive meanings along the lines of support, assistance, and sustenance.

2 Young jackfruits are too resinous and tannic to eat raw. They are prepared and used differently from ripe jackfruits. There will be more posts on this delicious fruit which, when unripe, is used as if it were a vegetable.