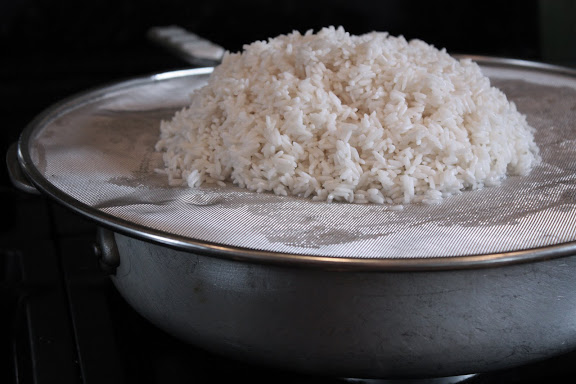 Sometimes, I feel like all the brilliant friends I am fortunate to have, but perhaps don’t deserve, should be the ones writing this blog. My friend B very recently allowed me to share her Khao Na Gai recipe with you. Then a few weeks ago, my friend L showed me the only way he had been making perfect Thai sticky rice for the past several months. It’s done without a steamer.

I’ve tried this method many times since then, mostly just to prove him a misguided heretic. But in the end, I, too, have willingly joined the cult of splatter guard. And the post I had written and kept in the draft folder on 5 ways to perfectly steam sticky rice has suddenly been rendered obsolete.

Traditionally, Thai/Lao sticky rice is steamed in a cone-shaped woven bamboo basket (to achieve the soft-yet-chewy rice that they eat with their hand, the rice is not cooked in water but with steam), which is used together with a funny-looking aluminum pot, or an aluminum (sometimes stainless steel) multi-tiered/stackable steamer. Both methods work very well and have been used by the Thai people for ages. The equipment itself is also inexpensive and not that hard to find. 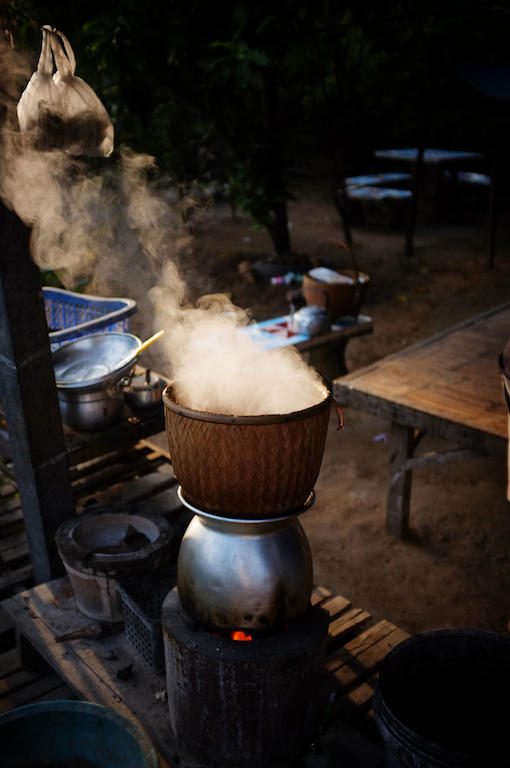 However, the problem which some of us have with these traditional steamers is the lack of storage space. The bamboo basket-“spittoon” combo takes up quite a bit of cupboard or pantry space. While this is not necessarily a deal breaker, a uni-tasker that size can elicit resentment. Besides, in order to clean the bamboo basket, you need to soak it for hours to loosen up the sticky rice that has penetrated its every crevice. Then some scrubbing is still needed, followed by thorough drying of the basket on the dish rack to prevent molding since wiping it dry prior to storage just won’t do. 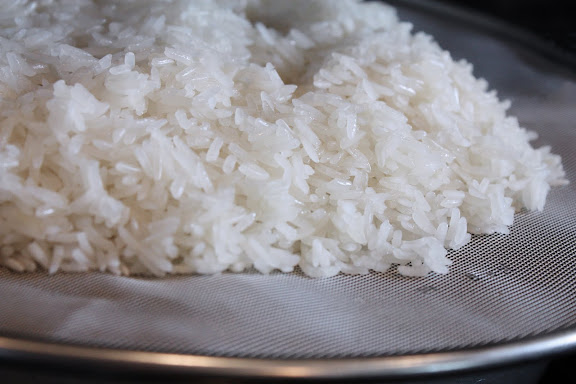 The multi-tiered steamer, on the other hand, is not a uni-tasker. But it sure takes up a lot of storage space. To make sticky rice, it also requires either a heat-proof dish or a piece of cheesecloth with which to line the bottom of the steamer. Have you tried to get every single sticky rice kernel off a delicate piece of cheesecloth? My. Goodness.

Sometimes, when I want to make just a cup of sticky rice for myself, the idea of dragging these big things out of the cupboard, putting them together, cleaning them, drying them, and putting them back in the cupboard is enough to make me go, “Ugh.” It’s like, as the Thai idiom goes, “riding on an elephant just to catch a grasshopper” (ขี่ช้างจับตั๊กแตน).

Ditto with an electric steamer which had been my go-to method of steaming until now. Cleaning all the parts is a pain. But I have no choice. Steaming sticky rice in the microwave is unreliable due to varying wattages, and the method that one person swears by is often frustratingly useless to another.

The collapsible steaming basket may not be taking up much space, but its pitifully short legs result in the rice being much too close to the boiling water causing the bottom parts to turn mushy. Also, since the water level can’t be higher than the space between the bottom of the basket and the bottom of the pot, the water often evaporates too soon and needs to be replenished and brought back to a boil periodically, especially if you cook a large amount of rice. That is a pain. Besides, that pole in the middle is just … awkward. 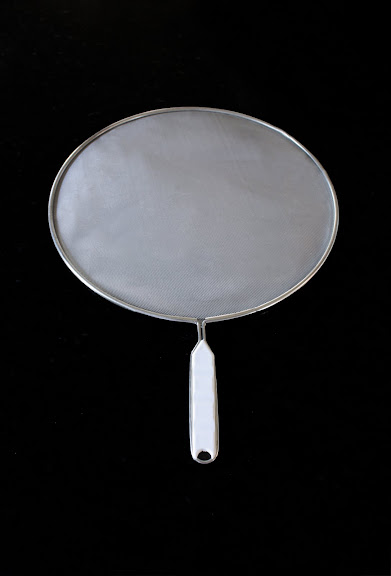 Enter the handsome, sleek uni-tasker-turned-multi-tasker: the splatter guard. Chances are you already have one tucked away somewhere in your pantry. But if you don’t, its relatively low prices may convince you to get one. Though wide, a splatter guard is wafer-thin and can wedge itself very easily between the cookie sheets in your cupboard. The pot-splatter guard ensemble is also quick and easy to put together and take apart.

And here’s the thing: it works so beautifully. At first, when L explained to me this unusual method, I kept thinking he was talking about a cheapo, MacGyver-ed “steamer” which under-equipped cooks resort to in the absence of a proper steamer. But L went on to rhapsodize the perfectly-cooked sticky rice he’d been getting from this steaming method. He cooks his sticky rice this way not because he doesn’t have a steamer; he cooks the rice this way because it yields better results. L had me convinced. And look what I’m writing now.

Not only is the fine mesh perfect for regulating steam from below and eliminating hot spots (or wet spots), it is also ridiculously easy to clean. Sticky rice does not stick to the mesh screen at all. The rice is cooked evenly; the grains remain whole and never turn mushy; all grains cook at the same rate.

Why, oh, why did I not know about this sooner? 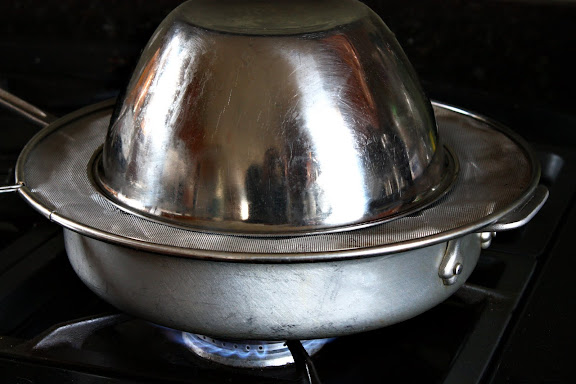 This method works well with other easy steaming jobs as well. I’ve made beautiful Thai curried fish custard in banana leaf cups and many other things this way. You can also use a splatter screen to sift flour or play indoor badminton with, swat a fly in the kitchen, and, of course, as a splatter guard.