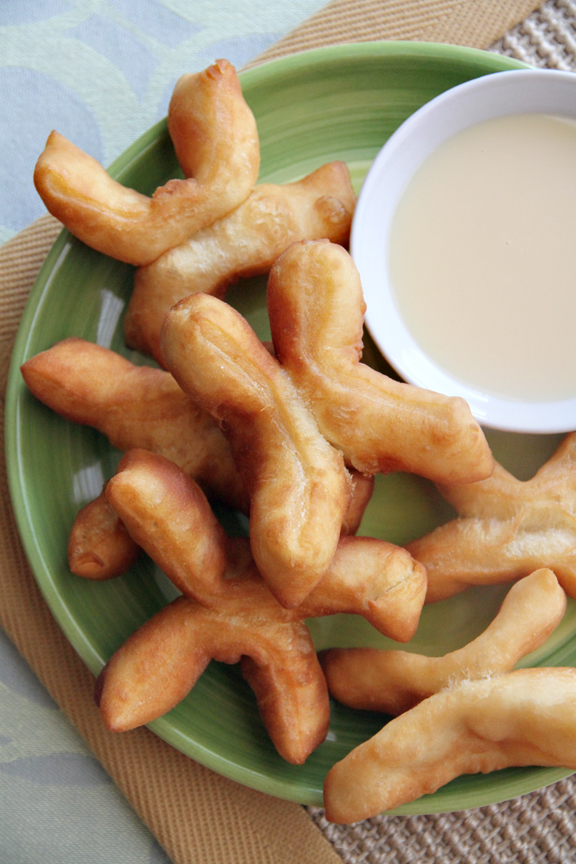 I chuckled when reading up on the history of these Chinese crullers, you tiao (油条), which have been localized in Thailand into Pa Thong Ko (ปาท่องโก๋).

According to the widely-circulated Chinese folk etymology, these pairs of dough sticks apparently represent two evil people who deserve to suffer in hot oil. To the Thai people, the conjoined crullers represent something cuter and more romantic: a couple who are deeply attached to one another and seen together all the time. Symbols and figures of speech behave like that across the various cultures. The Zealous Water Buffalo, my alter ego, has written about these things.

Another funny thing about Pa Thong Ko: it is a misnomer resulted from confusion on the Thai’s part over the various goodies sold by Chinese immigrants from years ago; it’s not even a localized pronunciation of the original Chinese, but a wrong name altogether. We could have gone with something close to you char kway (油炸粿) or something similar to that as the Chinese words that have entered our vernacular often come from the Hokkien or Teochew dialects. But, apparently, a mistake was made a while back and it has stuck with us ever since. In other words, unless you speak to someone who knows Chinese, your inquiry about youtiao or you char kway in Thailand will be met with a,”Huh?“ 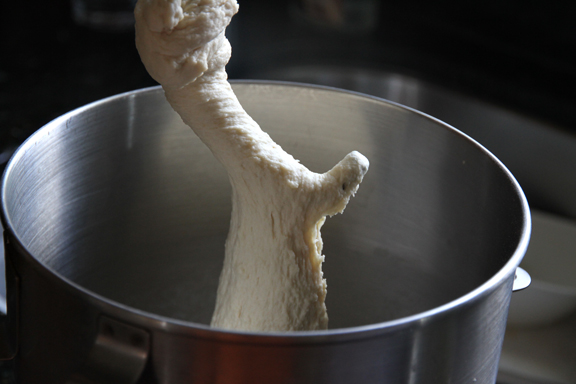 Pa Thong Ko comes in smaller size — generally around 3-4 inches in length whereas youtiao could be as long as a couple of feet. Also, when I was growing up — maybe it’s my imagination — Pa Thong Ko seemed to resemble their Chinese prototype more both in terms of appearance (blistered, bubbly, crispy exterior) and texture (soft and slightly chewy with honeycomb-like crumb). These days, they seem to have morphed into crullers that look smoother on the surface, more crusty than crispy on the outside, and doughy on the inside. Rarely do you find Pa Thong Ko made the way they were years ago. (I’m not complaining; I’m just reporting what I’ve found. In fact, what you see here is my attempt at replicating Pa Thong Ko as they are made these days, albeit more crispy than crusty.)

Also, the Thai people like to eat these crullers with sweetened condensed milk, coffee, or dipping custard, Sangkhaya (สังขยา). They are also served with Chinese congee, jok (โจ๊ก).

Note that there’s another kind of fried dough that is also called Pa Thong Ko, but it’s almost entirely different from what’s in view here. This type of Pa Thong Ko is smaller, fried until thoroughly crispy, and served as an accompaniment to Chinese-style soybean curd in warm ginger syrup (เต้าฮวยน้ำขิง). 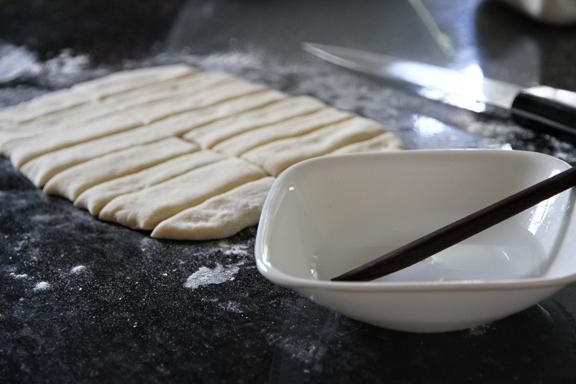 Enough with the background information. Let’s talk about how to make these crullers.

First of all — and this may sound harsh — assuming my opinion means anything to you: if you see recipes for Pa Thong Ko that don’t call for both baking ammonia and alum powder, I wouldn’t even think about messing around with them. I’m serious. That’s the whole point of being a recipe tester: I waste my time and money, so you won’t have to. And, boy, did I do just that. With just baking powder, your Pa Thong Ko will be doughnut-like, and you and I both know Pa Thong Ko aren’t doughnut-like. With just baking soda, your Pa Thong Ko come out crusty (as opposed to crispy) on the outside and hollow on the inside. Again, we both know that doesn’t describe good Pa Thong Ko. 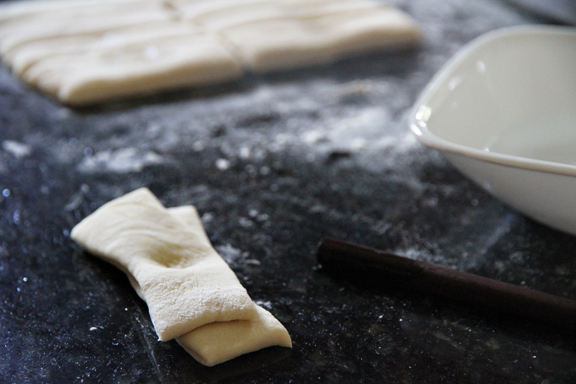 My recipe takes no chances. It has ammonia, alum, and yeast. Baking powder is added at the last stage just before the dough is formed to give it a lift in the deep-fryer. The result is Pa Thong Ko with open crumb (but not hollow) and crispy exterior. When you bite into one, it collapses between your teeth. No bouncy resistance as is the case with yeast doughnuts.

The ammonia also gives the crullers that familiar scent that’s just faint enough to be pleasantly reminiscent of Pa Thong Ko from the streets of Bangkok, but not so strong that it reminds you of … I’ll shut up now. 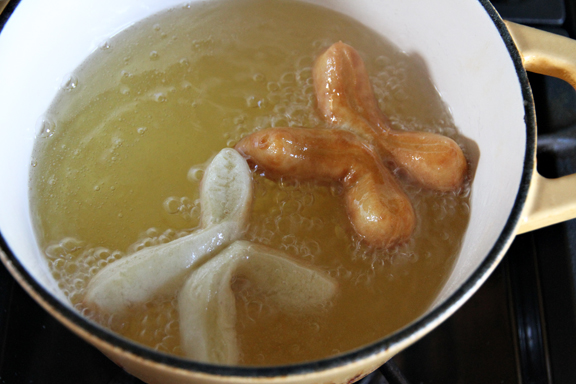 I’ll admit, though, that even though this recipe represents my best attempt to date, I still won’t give it an A or an A+. Maybe a B+. I’m satisfied with the texture and flavor, but shaping the dough into pairs of Pa Thong Ko in a uniformed manner is still a struggle for me.

This is because the dough is wet. It has to be wet; otherwise, you won’t get the open crumb. Adding more flour to the dough defeats this purpose. Keeping the flour at this amount presents a bit of a problem for an amateur Pa Thong Ko maker like me as the two pieces of dough tend to merge together a little too seamlessly. You see, well-formed pairs of Pa Thong Ko kind of have to remain visibly two separate entities conjoined in the middle. It’s going to take some practice. 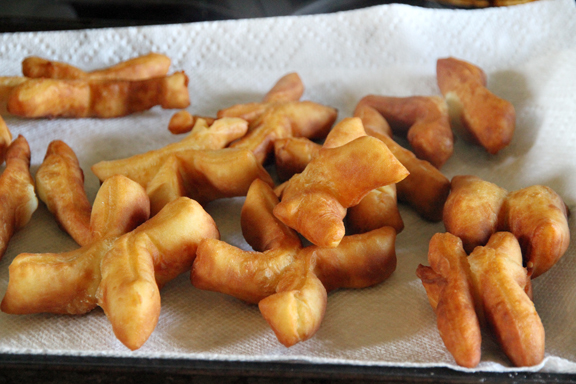 The rest is pretty easy, actually. The recipe has produced very consistent results for me during the past several months of testing and retesting. Be sure to secure all the necessary ingredients. Alum powder is found either in the spice aisle or canning aisle. Ammonia powder is a little harder to find at a local supermarket, but you can find it online easily. 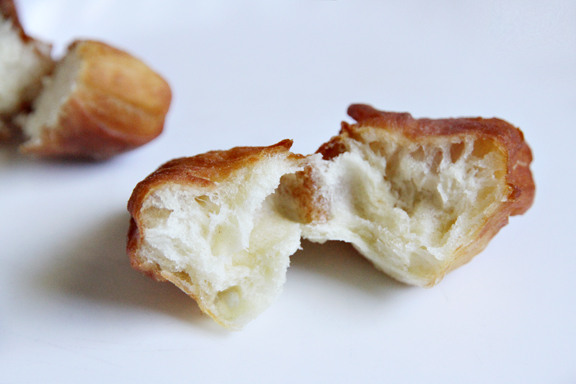