By Leela on April 18, 2009 in She Braises, She Deglutenizes, She Simmers, She Thais 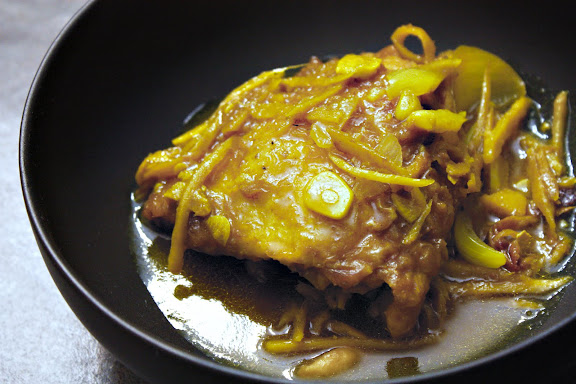 The title may be hesitant in tone, but I am saying this with no ambivalence: if you would cook from only one of my recipes, be sure it’s this one.

My maternal grandmother made this stew for us quite often. Back then, all I cared about, sadly, was eating it, not learning how to make it. In contrast to my mother who wrote down more than she should have, Grandma never wrote down any recipes anywhere and, unless I was there when she made certain dishes, I never learned what went into them. My attempt to get a written down recipe from Grandma would have been futile anyway given the way she cooked. I can imagine how our conversation would have gone: 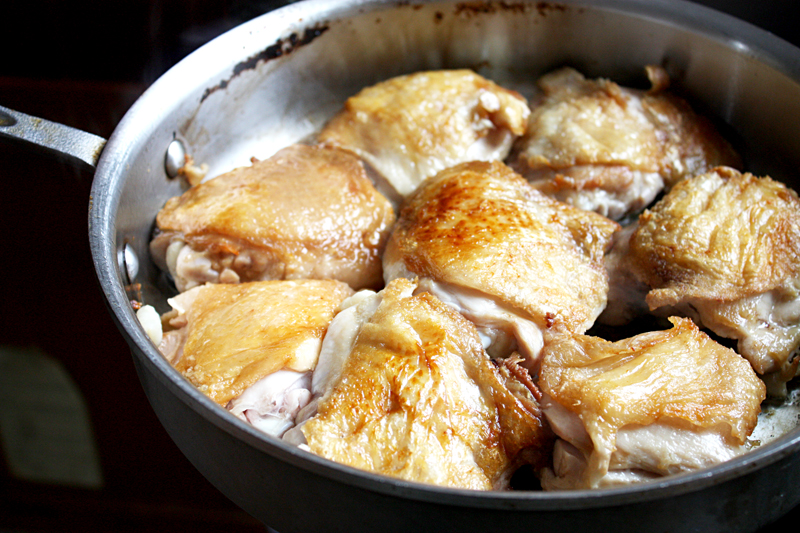 (Sigh …) That’s my very Socratic grandmother — teaching with questions, answering questions with more questions. If we had a Thai version of Jeopardy growing up, Grandma would have been one formidable contestant. But to be fair to Grandma, nobody in her generation, or those before hers, really cooked with recipes anyway. It is all about learning by observation for Thai women in the old days. Back then, you hang out in the kitchen, you learn. You don’t hang out in the kitchen, let’s hope you marry well and can afford to hire many culinarily-talented maids. 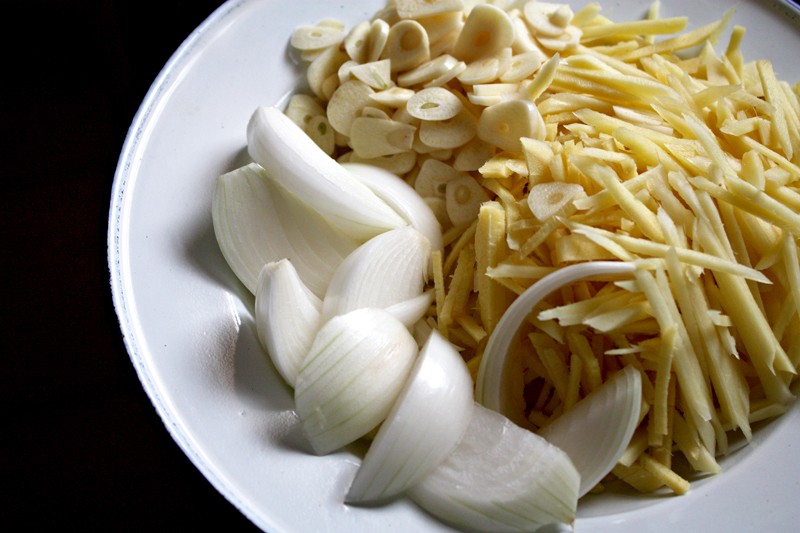 So ever since I came to the US, I have been making this dish based on nothing but the memory of what it tasted like when Grandma made it. The first several attempts yielded mixed results, but I think I’ve finally nailed it. The only thing that bothers me is that I don’t know the name of the dish or whether it even has one. It isn’t a traditional Thai dish. It isn’t a curry or one of the Chinese “red-cooked” dishes. It isn’t one of the “western” dishes we sometimes made either. It is different. And it is very yellow.

I remember asking Grandma once what kind of chicken stew this was. Socrates paused for a bit, then turned around and answered, with a question, “Burmese?” This time her question wasn’t didactic; she actually wasn’t sure. 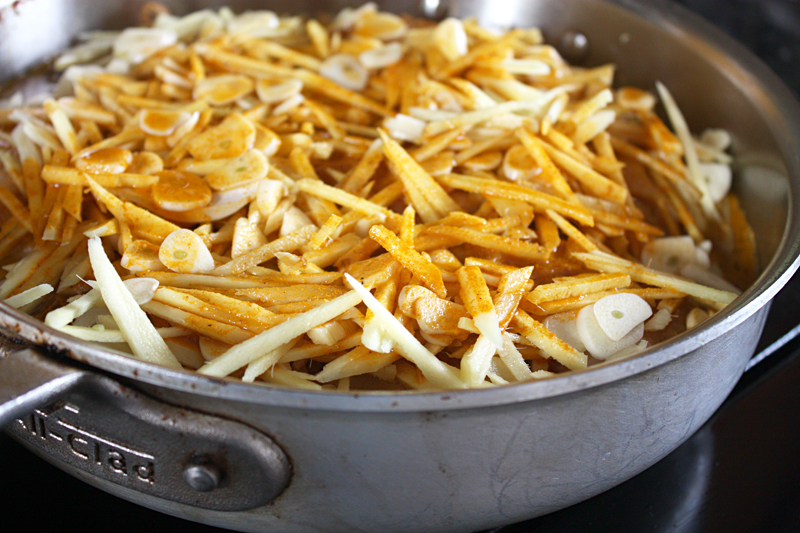 I think she might have been right. Grandma had lived in a few places outside of Bangkok, our hometown, and sometimes the influence of regional cuisines, especially the northern and northeastern cuisines, could be detected in her home cooking. And since the northern Thai cuisine is known to be influenced by Burmese cuisine, the idea of this curried stew being Burmese in origin is not too far-fetched. But it doesn’t matter. Burmese or not, I’ve never called this chicken stew anything but “the Yellow Chicken.” 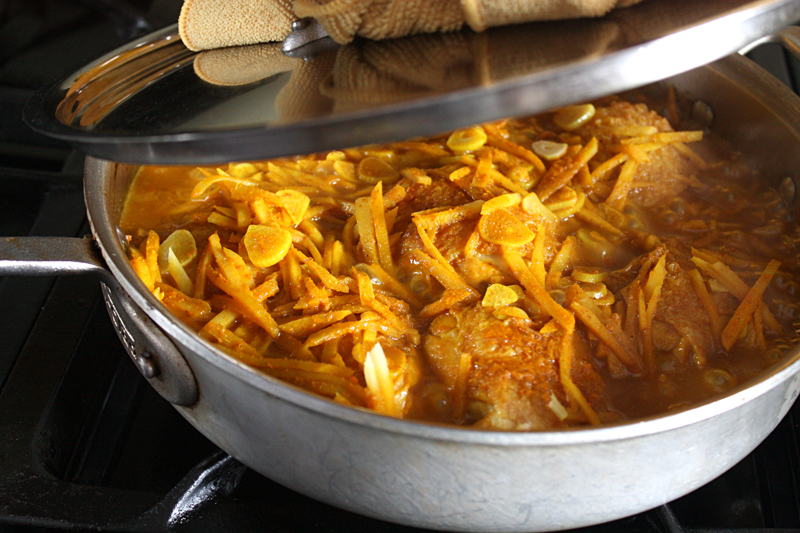 Before we get to how to make “the Yellow Chicken,” here are some remarks I’d like to make:

1. Even though I call it stew (because it’s not really a curry from a Thai point of view), you need to know that this dish, like almost every main dish in Thai cuisine, is meant to be eaten with rice. If you eat it by itself, you will quickly realize that the flavor is too strong and perhaps even a bit too salty. You wouldn’t eat Thai green or red curry by itself, and you wouldn’t eat this stew by itself either.

2. The amounts of fresh ginger and garlic called for may terrify you, but you just have to trust me. The ginger and garlic get cooked along with the chicken and eventually turn mild, soft, and sweet. But if you’re extremely sensitive to the spiciness of fresh ginger, you may want to rinse your julienned ginger under cold running water until the water runs clear then pat it dry before adding it to the stew.

3. Use fresh ginger and garlic only. No substitutes. No shortcuts. No whining. 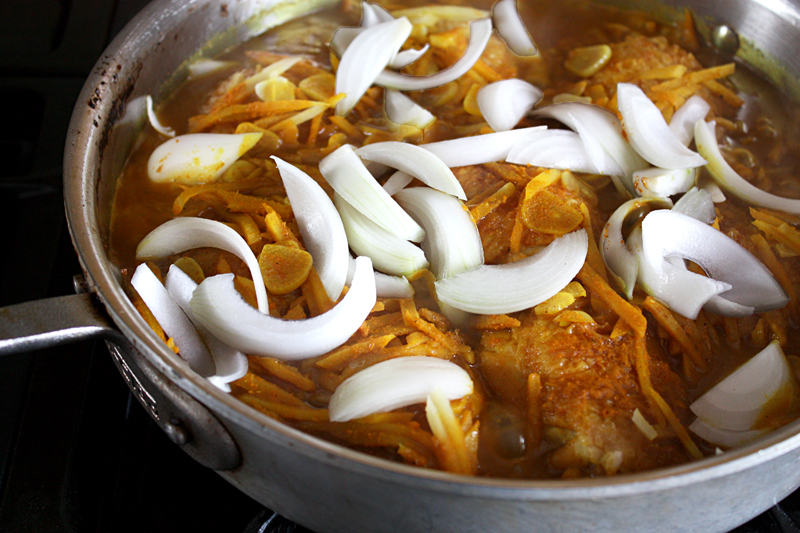 4. The ginger needs to be julienned (peel it first, then slice it diagonally into 1/8-inch-thick coins, stack them up and cut them lengthwise into 1/8-inch-wide matchsticks) and the garlic thinly sliced crosswise. This is because 1. Grandma did it this way, and 2. I once tried to save time and energy by pulsing the ginger and garlic in a food processor and found out it was a big mistake. The stew became a goopy mess with the taste of garlic and ginger being too overpowering. Not worth it.

5. Use bone-in, skin-on chicken thighs for best results. You can use boneless chicken, but it won’t be as flavorful due to the absence of the bones. I figured a cut-up whole fryer would do. But I do not recommend boneless, skinless chicken breasts.

6. Be careful when cooking with turmeric. Once it gets on your light-colored shirt, it’s there for eternity and a day.

7. I always use my All-Clad, triple-ply stainless steel saute pan when making this stew. You really do get better results with a heavy-bottomed, high-quality pot. With the heat carefully monitored, you won’t need to stir the stew at all, and you won’t run a risk of the sauce scorching at the bottom of the pot either. However, if you need to work with what you have, you will need to stir the stew occasionally. The sauce, as you will see, contains a starch thickener which makes it susceptible to gunking up and scorching at the bottom of the pot. Once the sauce burns, the stew turns bitter and you may have to throw it all out; be careful.