Som Tam Recipe (ส้มตำ): Thai Green Papaya Salad With or Without a Mortar

By Leela on June 8, 2010 in She Deglutenizes, She Thais, She Tosses, She Uncooks, She Veges 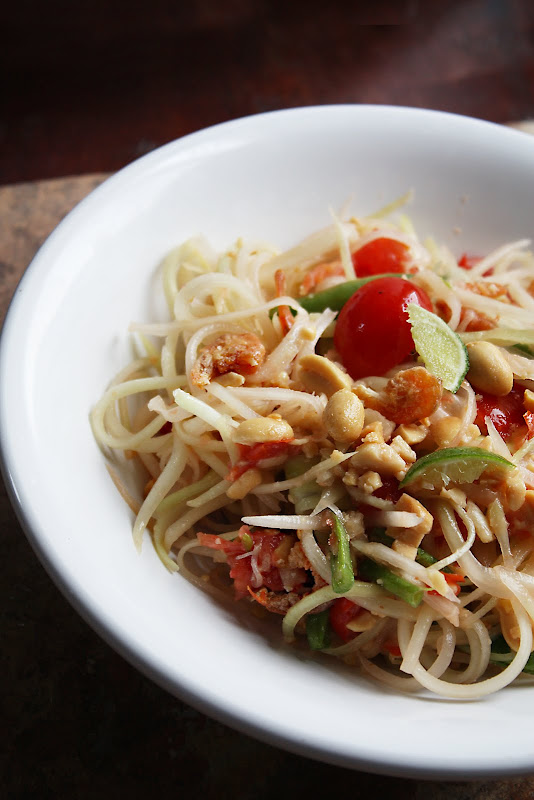 Some of the requests I’ve been getting in the past several months include, “How do you make X without Y (Y = a cooking apparatus with which X is traditionally prepared)?” Ranked number one among such requests is, “How do you make Thai green papaya salad without a mortar and a pestle?”

On a bad day, I would cringe and wonder, in this day and age when even the most exotic of cooking tools can be purchased online, what would be the excuses for not investing in such tools if the success in creating one’s favorite dishes depends on them? But on a good day, I tell my sometimes impatient, self-righteous self to shut the heck up. True, the tools may be more readily available these days, but there are issues of shipping costs (would anyone care to calculate how much it costs to ship a granite mortar across the country?), storage space, etc. Besides, I am a trouble-shooter by nature. The process of figuring out creative solutions to a problem thrills me to no end. Macgyver is my kitchen patron saint.

Well, guess what. Today’s one of those good days.

Those who have never been to Thailand may not be aware of the fact that what is featured here is only one of the many versions of Som Tam (ส้มตำ)* or Thai green papaya salad (most often transliterated Som Tum which is linguistically messed up or Som Tom which is wrong in multiple levels). This more “friendly,” peanutty version happens to be the most prevalent one outside of Thailand.

Why? Well, it’s less intimidating than some versions that are flavored with the Northeastern-style fermented fresh water fish (ปลาร้า) the smell of which could send the uninitiated running for their mommies. Then there are some versions that are flavored with pickled fresh water crabs (ปูเค็ม) featuring severed and crushed body parts of brined decapod crustaceans peeking through the strands of green papaya as if to say, “Can you put me back together?” (These versions do exist in Thai restaurants outside of Thailand, but people who order them are usually native Thais or non-Thai secret menu seekers.)

There are also some that are made with vegetables other than green papaya** (which, strictly speaking, is a fruit). And some are made entirely out of fresh fruits. 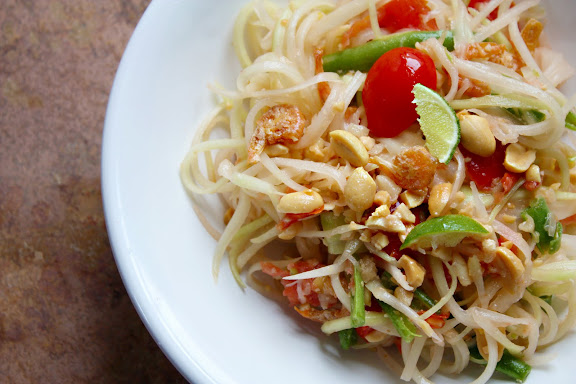 I needed to get that out of the way lest anyone think that this version of Som Tam is the definitive version.

I also need to talk about one other thing before going into the recipe. (Please know that I’m not wasting your time with these little tidbits of background information; I actually have a point.) It should be noted that the “Tam” in Som Tam means “to crush” or “to pound” — a verb that is most commonly used when a mortar and a pestle are involved. “Som Tammade without a mortar and a pestle,” therefore, is oxymoronic.

How to Make Thai Green Papaya Salad (Som Tam or — shudder — Som Tum, Som Tom) with or without a Mortar
Printable Version

To make a single serving of this version of Som Tam, you need:

1. 6 ounces of green papaya strands – To make green papaya strands, peel a green papaya (choose one that’s really, really firm and doesn’t yield easily when pressed with your thumb) and shred its flesh with this incredible tool that holds the universe together – the Kiwi shredder. There is a very inexpensive handy dandy shredder

which is much more affordable. Or you can go for the more expensive brand – Kiwi Pro-Slice Thai Peeler 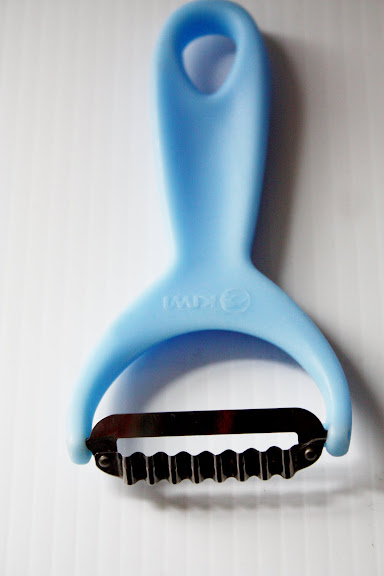 2. 6 cherry tomatoes, halved
3. 1/4 cups of dry-roasted peanuts (unsweetened)
4. 2 tablespoons of dried shrimp (omit if you’re a vegetarian)
5. About 1/3 cup of fresh green beans or yardlong beansthat have been cut into 1-inch sticks
6. One of two any color Thai bird’s eye chillies (serrano works too, but not jalapeño), depending on your heat tolerance
7. Fresh lime juice, to taste 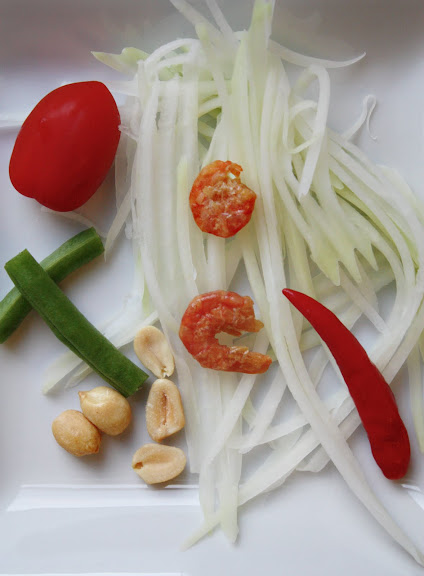 8. Good Thai fish sauce, to taste (use salt if you’re a strict vegetarian/vegan, but soy sauce in Som Tam would seriously undermine our friendship)
9. One medium clove of garlic, peeled
10. Palm sugar, to taste (brown or white sugar works as well, though not as authentic) 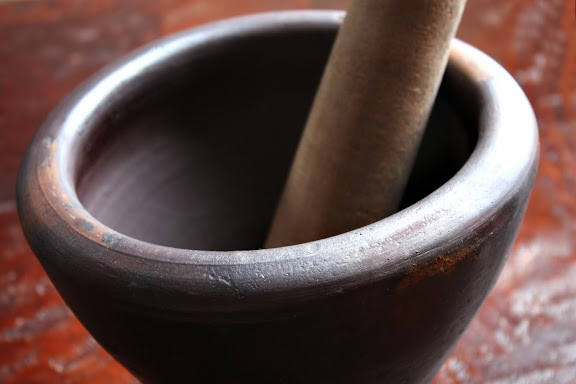 To make Som Tam with a mortar and a pestle:

1. Choose the right kind of mortar and pestle to avoid 1. producing a DOA Som Tam and, 2. an appearance of cluelessness.
2. Pound the garlic and chilies until they form a smooth paste.
3. Add the dried shrimp and pound until the pieces are broken up, but not completely pulverized.
4. Add the palm sugar (sometimes it is hardened and needs to be chopped into little pieces before being used in a recipe), maybe 2-3 teaspoons at first. You can always add more. The reason we’re adding the palm sugar now is because you want to pound it to a paste so that it can be dissolved more easily and blend more readily with the other flavoring agents which will be subsequently added.
5. Add the peanuts and lightly pound until they are broken into tiny pieces, but not to the point where they form a thick paste.
6. Add the green beans and crush them with the mortar until they’re splitting and lightly bruised.
7. Add the papaya and tomatoes and pound on them. This is strategic bruising. You want the papaya strands to soften up a bit so they can drink up the seasonings more readily. You also want to crush the tomatoes so they release their juices and give their flavor and beautiful red hue to the otherwise anemic-looking papaya strands.
8. Add a couple of teaspoons of fish sauce and a couple of teaspoons of lime juice to the mix.
9. Have in one hand a large spoonto help flip things over in and scrape down the sides of the mortar while your other hand pounds away with the pestle.
10. Keep pounding and flipping for a few seconds, just until the content of your mortar resembles Som Tam. Trust me, when you see it, you’ll recognize it.
11. Taste for seasoning. Add more fish sauce, lime juice, or sugar as needed.

That is the standard Som Tam protocol. But what if you don’t have a mortar and a pestle or — for reasons that escape my logic — you have one without the other? In that case, you will need to simulate the mortar-pestle action in the following manner: 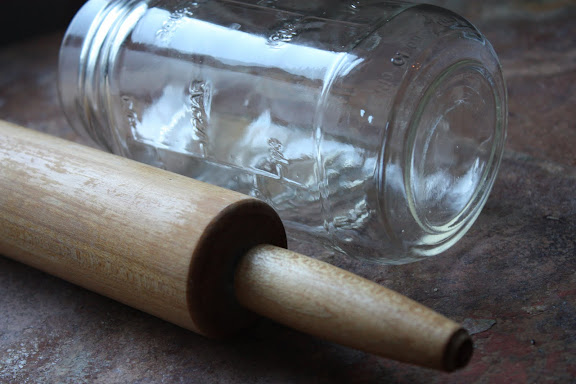 1. With a garlic press, or a sharp knife and two skillful hands, mince the garlic into a paste. No chunks, not even small ones. Paste.
2. Place the chillies in a plastic ziploc or sandwich bag, seal the bag, place it on a folded kitchen towel, and pound it into a paste with your weapon of choice: a rolling pin, a baseball bat, or the bottom of a Mason jar. Be brutal. You’ve earned that right. 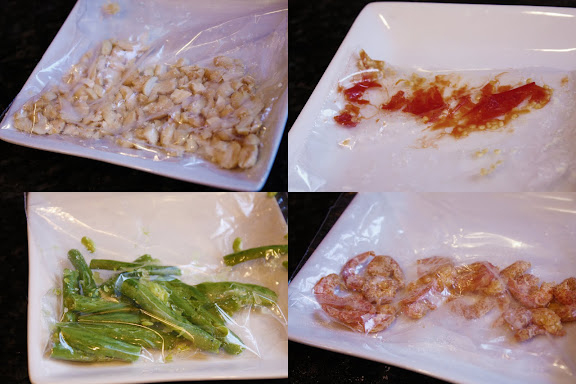 3. In a separate bag, do the same with the palm sugar. Make sure the sugar is pounded into a paste for better dissolution. Spare it no mercy.
4. Place the peanuts, green beans, and dried shrimp in one bag and pound them just until the peanuts are broken up, the dried shrimp is flattened, and the green beans are bruised and split up.
5. Place the green papaya strands in a large mixing bowl along with the halved cherry tomatoes. Empty the contents of the torture bags into the papaya bowl. Add lime juice and fish sauce to the bowl (start off with just a little; you can add more).
6. With your eager, murderous, yet impeccably clean hands, mix and squeeze everything together, crushing the tomatoes in the process. With both hands, mix and squeeze, then mix and squeeze some more. Keep squishing until the papaya strands are softened, the tomatoes have released their juices, and everything melds together nicely. This should take a few seconds, depending on how hard you squeeze.
7. Correct seasoning as needed.
8. Trust me. In a side-by-side blind tasting, one will have a hard time differentiating Som Tam made the traditional way and Som Tam made without a mortar and pestle.

You have now entered the geeky area.

*For those who have the smallest semblance of interest in how to properly pronounce the name of this dish in Thai:

The first syllable, Som (ส้ม) has the same vowel quality of the long ô in “dome” or “Rome,” but is of smaller quantity. Say Rome or dome, but reduce the vowel quantity to half its length. Then replace the R and D with S, keeping the shortened vowel in place. That’s how you say it. As for the tone, the closest thing to the proper tone would be to turn it into a verb in the imperative mood and say it as if you’re making a command, “Som!” That should do it.

The second syllable, Tam (ตำ) has the same vowel quality and quantity as the word, “come.” Say “come” in the flattest tone possible. Then replace the “c” in “come” with “t.” That’s exactly the vocalization you’re looking for. For extra authenticity, make your “t” unaspirated/unvoiced. Place the tip of your tongue right behind your front teeth (or, in some cases, denture) and make the “t” sound without shooting out a breath of air between your upper and lower teeth as you would when pronouncing the English “t” (especially in the initial position). 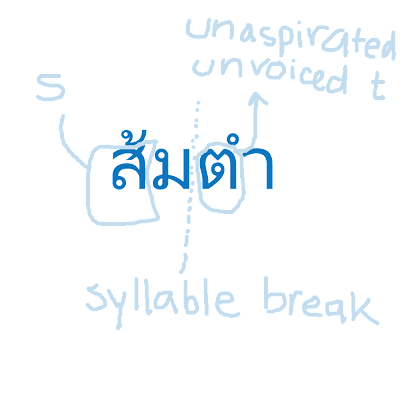 **Some vegetables have been successfully used as substitutes for green papaya which may not be available in all areas of the world. Good candidates would be vegetables that are crisp, mild- and clean-flavored, not prone to oxidation and can hold their shape well. Carrot (as LimeCake has made it here), cabbage, and daikon work really well. In fact, my favorite Som Tam is made of grated carrots. I like even it better than I do the traditional green papaya.

89 Responses to Som Tam Recipe (ส้มตำ): Thai Green Papaya Salad With or Without a Mortar