By Leela on November 5, 2010 in She Deglutenizes, She Simmers, She Thais 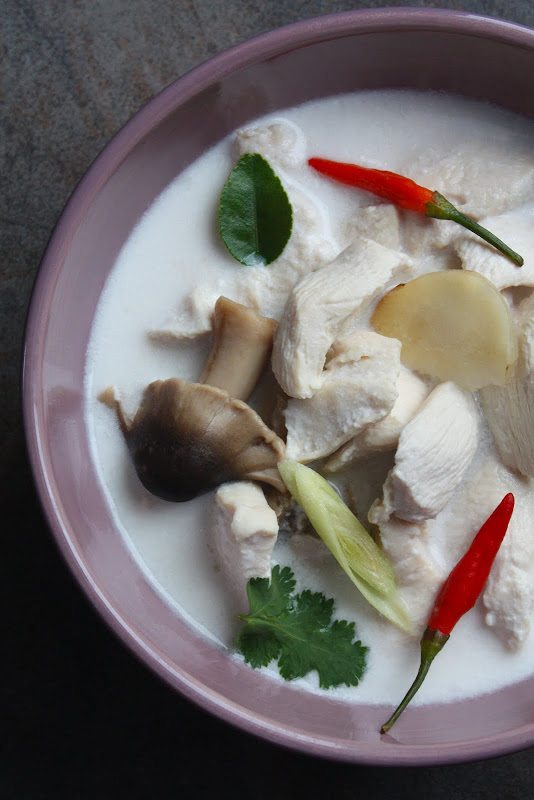 I’d waited two years to introduce Tom Kha Gai (RTGS: tom kha kai) (ต้มข่าไก่), one of the most loved Thai dishes of all time, on this blog because — and this probably won’t make a lot of sense — I’ve loved it so much and for so long that I didn’t know how to write about it. I still don’t. And while some dishes, e.g. Pad Thai (which is even more popular), have been left out mainly due to apathy, this one had been put on hold solely due to fear. (Um, not anymore. On November 27th, 2011, I published my Pad Thai recipe.)

Tom Kha Gai isn’t just any dish; it’s one of my top five most favorite dishes in the world, Thai or otherwise. At a risk of taking anthropomorphism of food a bit too far, I felt that if I let myself write about Tom Kha Gai with the kind of unbridled affection from the depth of my bowels, I’d bore — or scare — you. Yet, if I held back, I’d be remiss for not giving the dish the love it deserves.

Overwhelmed with affection for this soup, I’ll write in numbered points. 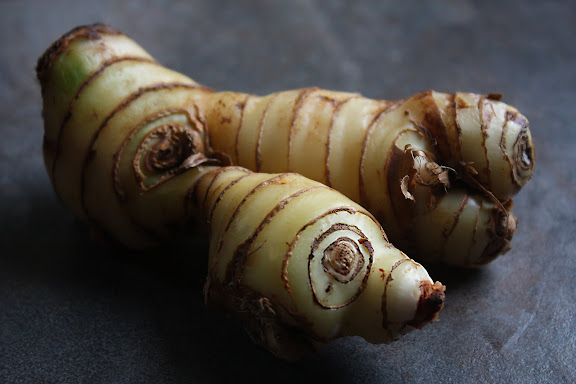 1. Tom Kha Gai is a soup made of chicken (Gai) cooked (Tom) in coconut milk which has been infused with galangal (Kha), lemongrass, and kaffir lime leaves.

2. Tom Kha Gai is seasoned primarily with lime juice and fish sauce. Palm or coconut sugar is not necessary as the natural sweetness of coconut is enough for me. In fact, I find cloyingly sweet Tom Kha Gai kind of disgusting, though not as vile as Tom Kha Gai seasoned with lemon juice or vinegar. 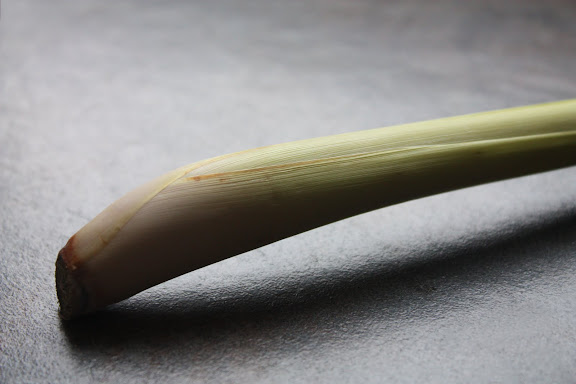 Since the purpose at hand is infusion, the entire lemongrass stalk, even the fibrous part, can be used.

3. In our household when I was growing up, Tom Kha Gai was made with bone-in, skin-on pieces of chicken that have been cooked until tender. Coconut cream (the “head” of coconut milk or หัวกะทิ) would be added toward the end along with the fresh herbs, followed by fresh bird’s eye chilies and fresh cilantro. The broth isn’t so thick and creamy, yet it is very flavorful due to the chicken bones. Some street vendors also throw chicken innards, feet, and congealed blood into the mix. Rarely would you find that kind of Tom Kha Gai at a Thai restaurant overseas. Most of the time, you’ll get thick and creamy coconut broth with friendly boneless, skinless chicken breast cut into bite-sized pieces. Nothing wrong with that. In fact, that’s the version I’m presenting here. You just have to employ a different cooking method to make up for the loss of savoriness in the broth. 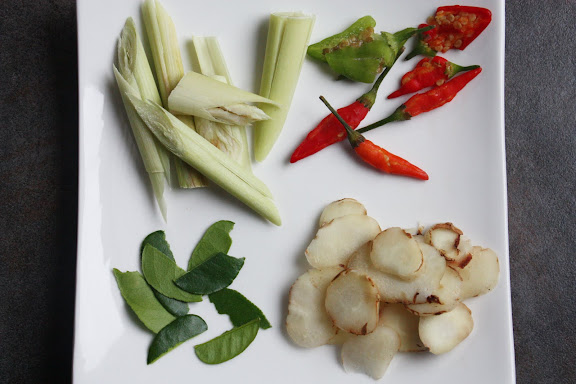 4. Some restaurants have taken to adding roasted chili oil or sometimes Nam Prik Pao (Thai chili jam) to Tom Kha Gai just as they do to Tom Yam. It’s a bit strange to my eye and tongue, and I don’t recall ever seeing it made that way in Thailand growing up or even now.

5. Tom Kha Gai is always relegated to the “soup” category in cookbooks and on restaurant menus. Here’s an annoying, hair-splitting, philosophical question: is everything broth-y a ‘soup’? Is the “soup” designation based on its appearance or the way in which it is served and consumed? You decide. The fact is that Tom Kha Gai, like most Thai dishes — soupy or not — are almost always served with rice as an entrée, as part of the whole meal ensemble and not as a stand-alone. [That little bowl of Tom Yam or Tom Kha Gai which your local Thai restaurant serves you with a couple of mini spring rolls as part of your lunch special is a westernized practice.]

6. How do I eat Tom Kha Gai? (I delusionally assume you care to find out.) This freaks out pretty much every American friend who has dined with me at various Thai restaurants in the US: I usually order a serving of Tom Kha Gai from the dinner menu which usually comes with rice, dump the rice into the Tom Kha Gai bowl, give it a stir, and eat it like that. The one-bowl approach is not a sophisticated (or traditional) way of eating Tom Kha Gai, but I like it that way. Regardless, eating this dish with rice is a common practice. Tom Kha Gai is, after all, an entree — a soup entree to be eaten with rice. 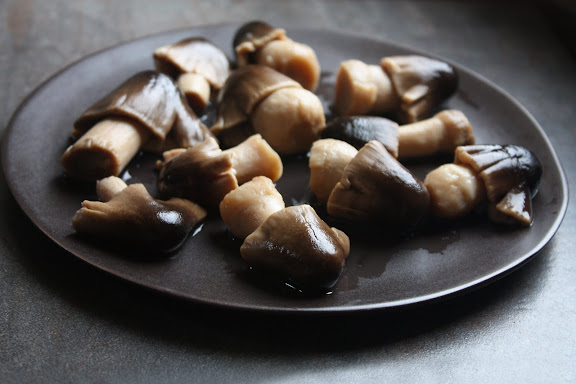 Straw mushroom is my favorite, but oyster (or white button) works too. Anything but shiitake!

7. The recipe which I’m sharing with you is a compromise between the traditional/old-fashioned-rustic Tom Kha Gai (with bone-in and skin-on hunks of chicken and gnarly, curling chicken feet flailing about in the pot) and the kind made by dissolving some bottled Tom Kha paste in coconut milk. If you don’t like bones in your soup, don’t feel guilty. Likewise, if you absolutely cannot find fresh galangal (without which Tom Kha isn’t Tom Kha), fresh lemongrass, and fresh kaffir lime leaves, don’t feel bad about using the paste. It’s still better than using dried galangal, dried lemongrass, and dried kaffir lime leaves which, from my experience, yields probably the most disgusting Tom Kha Gai — if you can even call it that — I’ve ever had any time anywhere. Broth infused with the dried version of those herbs tastes like really bad herbal medicine.

Note: Tom kha gai is usually made with bone-in, skin-on chunks of chicken (as explained here). The bones turn the plain water-coconut milk liquid into a delicious broth in the process of long, slow cooking. The low-temperature cooking method is recommended only when you opt for boneless, skin-less chicken breast meat.

Start off by infusing the coconut milk-chicken stock mixture with the fresh herbs. Get the temperature of the liquid to the level ideal for poaching, then add the chicken breast meat last. If we had gone with the old-fashioned Tom Kha Gai, I would have suggested you use the same method explained in my Old-Fashioned Tom Yam post. But since we’re using bite-sized pieces of boneless, skinless chicken breast meat, we need to slightly alter the cooking method by adding the chicken meat to the liquid last and cooking it very, very gently. 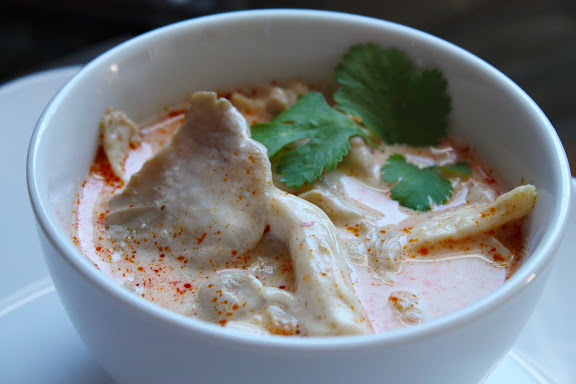 9. Can Tom Kha Gai be made vegetarian? Here are my thoughts:
Named as such, the dish has meat — chicken, to be precise — in it by definition which implies that it is not meant to be vegetarian. For those who abstain from meat, you can use tofu or, as I have done from time to time during my detox phases, assorted wild mushrooms which are very meaty and delicious. A friend of mine loves sliced cabbage (regular or savoy) in lieu of the gai in her Tom Kha Gai. My grandmother sometimes threw in hearts of palm, hearts of coconut, or sliced banana blossoms into the mix. None of this is traditional; yet all of these meat substitutes are delicious. I don’t like green leafy vegetables in Tom Kha, though. In fact, anything in the cruciferous family, except for green cabbage, tastes pretty bad to me when cooked this way. But that’s just an opinion.

10. Regardless, when gai is omitted, you can’t call it “Tom Kha Gai” just as you wouldn’t say “vegetarian barbecued pork.” Tom Kha Hed (mushroom), Tom Kha Tao-Hu (tofu), or Tom Kha Ka Lam Pli (cabbage) — whichever applies — would be more appropriate.Oh, and don’t forget to boost the flavor by using very concentrated vegetable stock and seasoning the broth with salt instead of fish sauce for the use of soy sauce would be a surest way to kill this lovely dish. 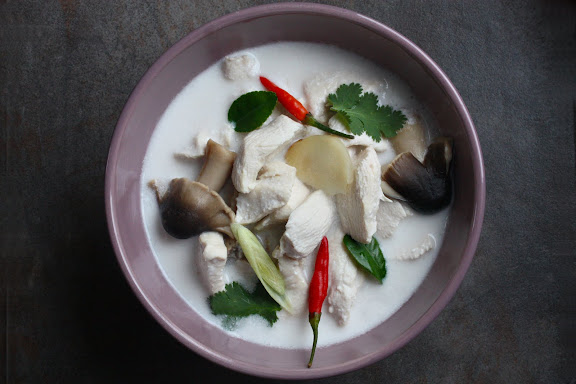 Though anemic-looking, this coconut-y broth packs in lots of flavor from concentrated chicken stock