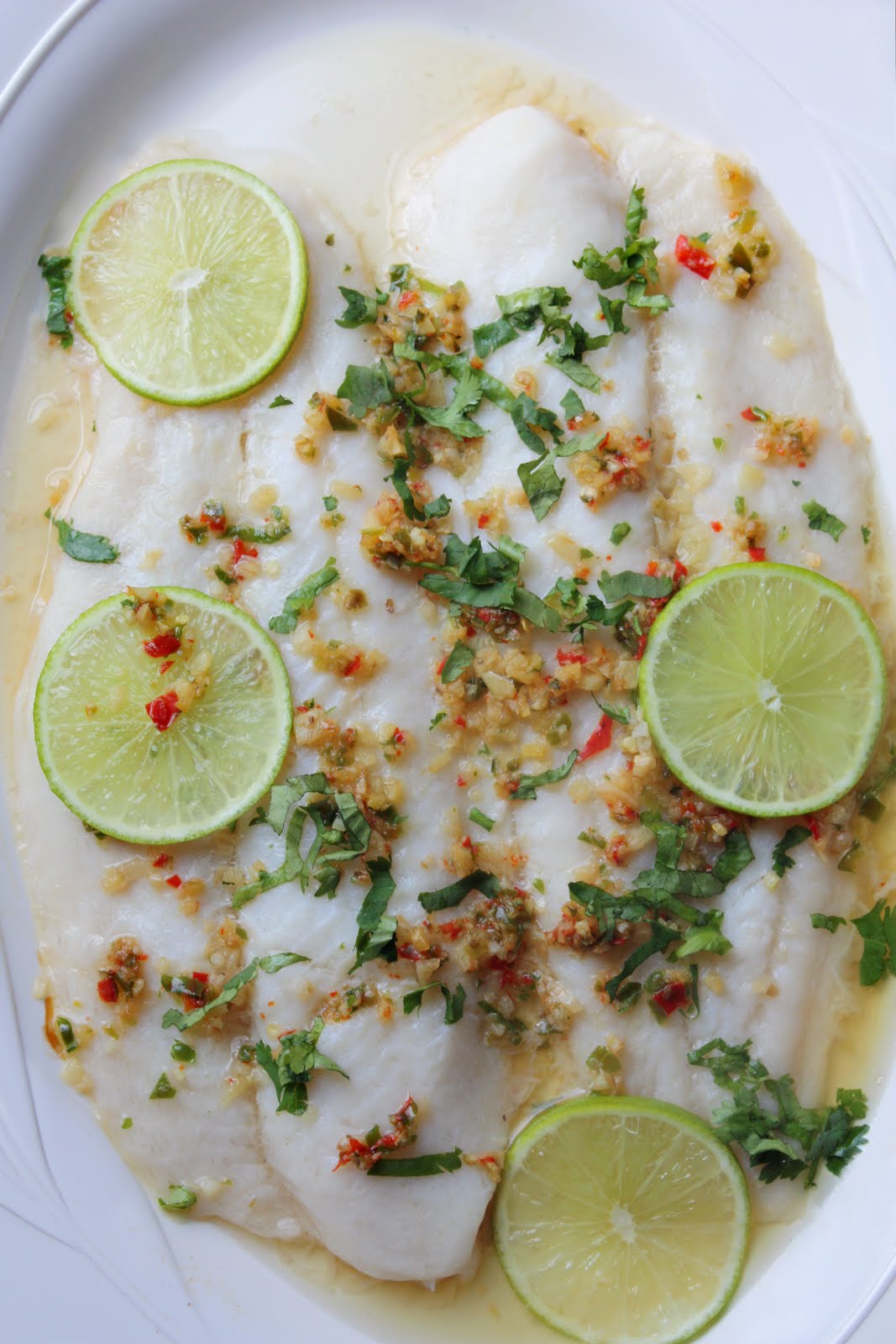 I used pickled garlic here just to experiment. But fresh garlic is traditional and best.
I used to wonder why steamed fish with lime, garlic, and chilies or Pla Nueng Ma-Nao (ปลานึ่งมะนาว – literally “lime-steamed fish“) is considered more of a restaurant dish than a home dish. After all, it is so simple to make that you would think it shouldn’t be something anyone would want to pay someone else to prepare for them. How easy? A journalist friend of mine once described it this way: “… [lime-steamed fish] is so easy to make that when you assign the task of cooking it to a lemur, not only will the primate pull off the best version you’ve ever eaten, it will also look disdainfully at you in the eye — hands on hip — and ask whether you have anything else more complicated for it to make … .”

I don’t want to get a lemur involved here. But, um, yeah.

But here’s the catch: this dish is excellent only when the fish is extremely fresh. If you ask a hardcore seafood lover like my Uncle S. (who is notorious for sending back restaurant dishes which he believes are made out of previously frozen seafood when fresh is promised), unless you use a fish that had been pulled out of the ocean within the past few hours, don’t even bother making this dish. Premier seafood restaurants along the southern and eastern seaboards take pride in serving the best “lime-steamed fish” made from freshly-caught fish; top-tiered seafood restaurants in Bangkok, which is not a beach city, insist on making this dish from live fish in their tanks only.

This is a simple dish with huge expectation placed upon it.

If my Uncle S. were writing this post, he would say to you ad nauseam that this dish will be completely ruined by the use of anything other than just-caught fish and not just the fillets but the whole fish. Well, I’m nowhere near that picky. Still, use the freshest fish you can find and don’t overcook it. The seasoning can be adjusted to taste; old fish with stale, mealy flesh can’t be fixed. 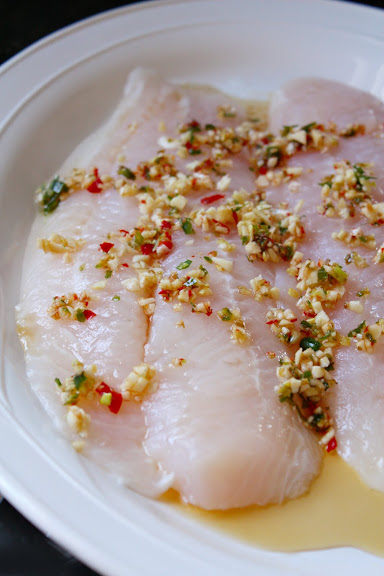 Print
Prep time
10 mins
Cook time
15 mins
Total time
25 mins
Author: Leela
Serves: 2
Ingredients
Instructions
Notes
Even though black banded kingfish (Seriolina nigrofasciata) or Pla Sam-Li (ปลาสำลี), the same type of fish often used to make fried sun-dried fish, is by far the most popular choice of fish to use in this dish, other kinds of fish (both salt- and fresh-water) can also be found prepared this way. I use swai here. Orange roughy, mahi mahi, or halibut work well also. Often prepared and served whole in most restaurants, this classic has been made simpler with the use of fish fillets. Chicken bouillon is added to the list of ingredients to make up for the loss of flavor in the absence of the flavorful fish bones and cartilage.
Wordpress Recipe Plugin by EasyRecipe
3.1.07
Thai Custard with Mung Beans: Khanom Mo Kaeng Thua (ขนมหม้อแกงถั่ว)
Nam Prik Pao (น้ำพริกเผา): Thai Chilli Jam – Secret Ingredient in Thai Spicy Stir-Fries, Salads, Etc.