By Leela on February 6, 2011 in She Rants and Muses, She Uncooks, She Veges 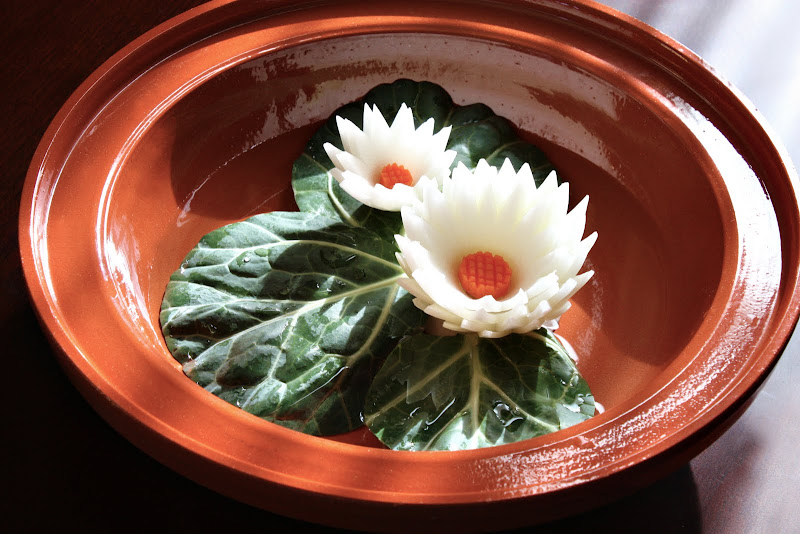 An edible mini lotus pond is a perfect centerpiece for your dinner party, especially if you serve Thai food.
I’m both amused and terrified every time someone writes me asking for advice on how to carve fruits and vegetables “like the Thai people do.” When that happens, I’d search the archives looking for something—anything—that might lead them to think I actually have that kind of talent. Of course, I’ve found nothing, and am left wondering where folks get that idea.

I can’t carve, at least not like this. And that’s just one of the many, many artistic things I can’t do. 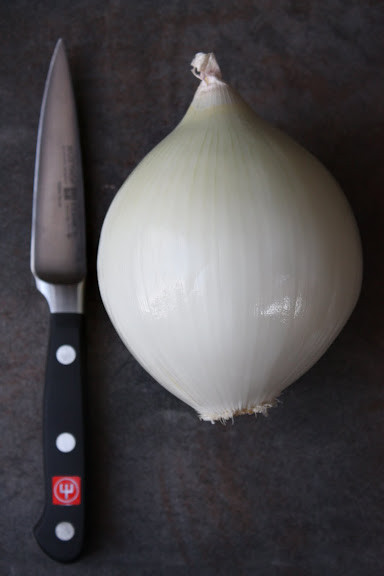 A very sharp paring knife is all you need. Also, for this project, a white onion.
To come up with beautifully-carved fruits and vegetables like those highly-skilled people do, you need to start off with at least some rudimentary skills, the right tools for the task, some guidance, and lots of opportunities to practice. Having none of those things, I’m at a loss even as to where to start. 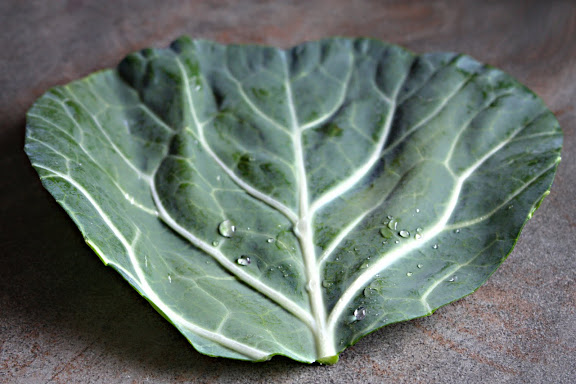 Cut a leaf of collard [1] into a round piece with the main vein running down the middle.
But fruit and vegetable carving has been such a celebrated activity in the Thai culture. It’s done in all strata of the society with varying degrees of intricacy and elaboration. And if I cared about this (I don’t), my lack of carving skill would have become that little sore spot in my life as a Thai woman whose livelihood revolves around food. 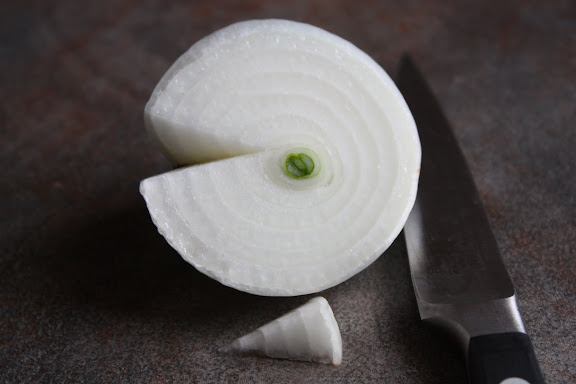 Cut the onion in half crosswise, and cut out 3/4-inch triangles all the way around the edge.
I think if I’d had any guilt about this, it would have begun when my maternal grandmother and I used to read together a classic Thai literature, The Golden Conch [2] wherein things end happily because of vegetable carving. After having overcome many obstacles including being separated from his mother, the Golden Conch finally rules as king at that point, and his mother disguises herself and works as a cook in her son’s palace. To give her son a hint as to who she really is (since, as a servant, you can’t exactly knock on the king’s door and say, “Yo, open up! It’s your mommy!“), the mother carves various key events during the Golden Conch’s childhood onto pieces of winter melon, puts them in a soup, and sends the dish to the royal table. 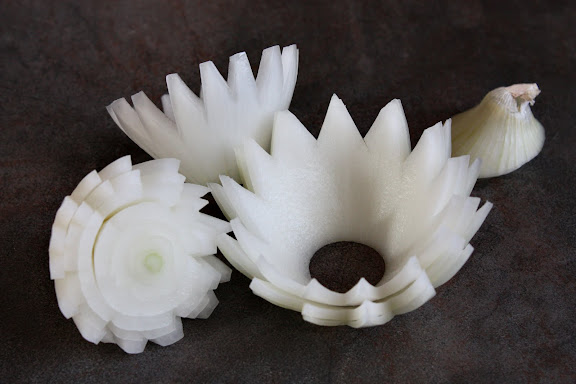 Trim 1/4 inch off the bottom of the onion half and separate out the layers. The inner layers will have blunt ends, so further trimming will be needed to get the pointy ends.
Noticing that the winter melon pieces are more elaborately carved than usual, the king examines them more closely and starts to recognize some events. After arranging the winter melon pieces in chronological order, memories come flushing back and the king realizes that the only person who would know so much about his life can’t be anyone else other than his mother. The cook is immediately summoned to the king’s presence, mother and son are finally reunited, and everybody lives happily ever after. The end. 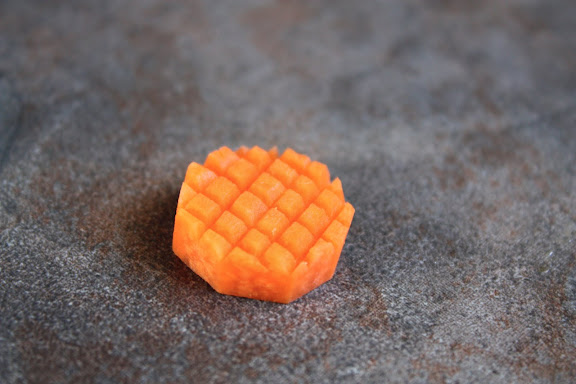 Cut a carrot into a 1/2-inch slice and make v-shaped grooves in the tic-tac-toe pattern.
And poor little me would get all sentimental and stuff until my grandmother asked, “Isn’t it great to be able to carve vegetables like that?”

It would be, Grandma, if I wasn’t such a non-dexterous dunce.

But everywhere you go in Thailand, you see this type of things. You jump into a cab and the first thing you notice is garlands of fresh flowers (jasmine, rose petals, marigolds, etc.) which the driver often hangs on the rear view mirror to appease the gods. It’s not uncommon that middle-tiered restaurants would garnish their dishes with—at the very least—frilly cucumber slices and roses made out of razor-thin tomato skins. 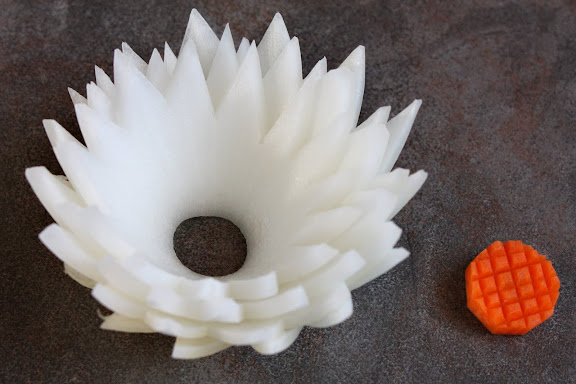 Layer 2-3 onion “petals” to create a lotus flower in full bloom, rotating the onion pieces to alternate the petals. Place the carrot stamen in the middle (some trimming may be needed).
But then I’ve figured that just because I am currently incompetent and devoid of any real interest doesn’t mean I can’t have fun with carving occasionally. Last time I was in Thailand, I even dabbled with garland making and a bit of lotus flower folding. And I had fun! So, armed with nothing but a very sharp paring knife and basic dexterity of a mammal vertebrate, I made this centerpiece. Just for the heck of it. (I used these vegetables to make a soup later on. Nothing was wasted.) 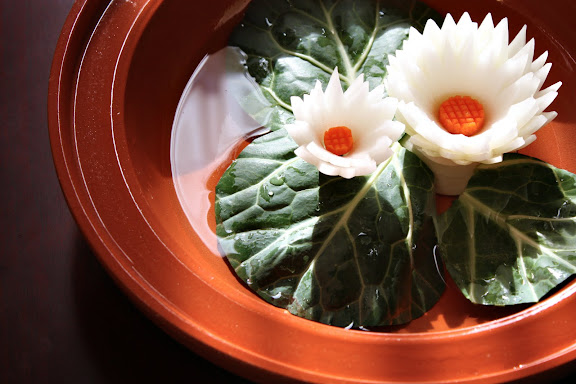 Fill the base of a wide, shallow bowl (I used the base of my terracotta tagine) with water.
Place the assembled lotus flowers on two inverted bowls [3]. Arrange 2-3 leaves around the flowers, covering up the bowls as you go.

2 The Golden Conch (Sang Thong สังข์ทอง) was composed by King Rama II who had ushered in the so-called golden age of Rattanakosin literature. Siam had just come out of a war-ridden era, established our capital city in what is now referred to (by non-Thais) as Bangkok, and started to enjoy a time of peace and prosperity. No more swords for a while; time to pick up a quill. The story of the Golden Conch, a baby who came out of his mother’s womb in a golden conch in the manner of a hermit crab, is loosely based on Buddhist mythology concerning the previous lives of Buddha (jātakas जातक) which has been adapted to fit into the culture as well as allude to actual locations in Thailand. While only few have read the original composition by King Rama II, the abridged and simplified version of the Golden Conch is one of the most read pieces of Early Rattanakosin period.

3 Use the smallest, shallowest bowls you can find. I used a small dipping sauce bowl seen in my Thai fried chicken post