By Leela on October 31, 2011 in She Deglutenizes, She Simmers, She Thais, She Veges 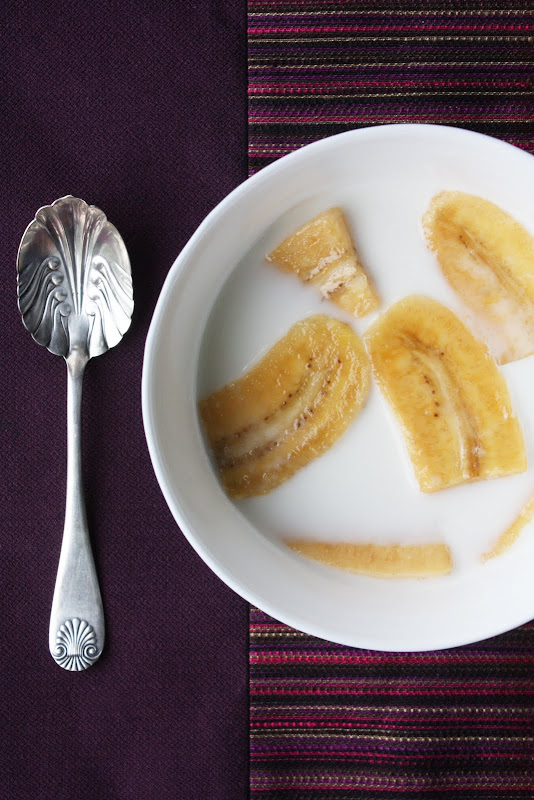 Kluay Buat Chi made with red bananas turns out more yellow than off-white
One would be hard-pressed to find anything among all the traditional, old-fashioned Thai desserts more “friendly” than Kluay Buat Chi (RTGS: kluai buat chi กล้วยบวชชี). It’s starchy; it’s sweet; it’s creamy; it contains no unfamiliar ingredients; it’s great hot off the stove or lukewarm or cold right out of the fridge; it’s liked by people of all ages and socio-economic strata; it’s the ultimate comfort food.

Its name, literally “bananas who have entered nunhood,” only reinforces the sense of simplicity and comfort associated with this dessert. In order to understand why this dessert is named as such, one has to understand a bit about the Theravada school of Buddhism in Thailand where women are ordained to be nuns. Theravadan nuns are nothing like other nuns you may have seen or heard of: they don’t fly, they don’t necessarily sing randomly or in a choir, and no edibles – as far as I know anyway – have been named to immortalize their flatulence.

When a woman becomes a Theravadan nun, she shaves her head and eyebrows, puts on a white robe, and lives in a temple. At some point in history, some playful (and slightly irreverent) mind might have likened the image of peeled bananas “enrobed” in white coconut milk to that of a Thai nun. Hence the name. And it stuck.

I also think there’s a word play going on here for the general term for this type of sweet coconut soup dessert is called “kaeng buat” (แกงบวด) of which kluay buat chi is a subset. It’s noteworthy that the buat in buat chi (to become a nun) and the buat in kaeng buat are homophones in Thai, but since they’re not homographs, the two can hardly be confused in terms of meaning.

Interestingly enough, when you make a kaeng buat out of something other than bananas, you can’t apply the term buat chi (to become a nun or to enter nunhood) to it.

Are bananas more religious than everything else? Or does the whole ordination thing have to do with burro bananas, the cultivar that is traditionally used in this dish, being off-white in color and reinforcing the nun theme?

If anyone knows the history of the name of this dessert and can back it up with credible (preferably well-documented) evidence, I would appreciate you enlightening all of us. Please feel free to leave a comment. 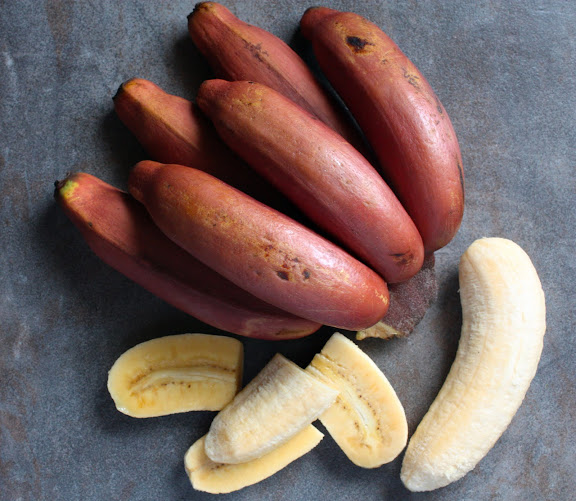 Red bananas make for a great substitute for the traditional burro bananas.
With the name issue out of the way, there’s not much else about this dessert to discuss. There’s not even a recipe for it. In order to make a kaeng buat, regardless of what type, what you need to know isn’t a recipe anyway; you merely need to know the general procedure which, once mastered, allows you to create so many variations of it.

One of the running jokes in the family has to do with my younger cousin’s first day in first grade many years ago. When he returned home, his mother – my aunt – asked what he had for lunch at school.[1] Not knowing the name of the dish, my cousin – and he wasn’t trying to be funny – answered, “I don’t know – some bamboo shoot and pork floating in water” (“อะไรก็ไม่รู้ หน่อไม้กับหมูแช่น้ำ”). The next day, he came home reporting that his lunch was, “same as yesterday – this time it was some winter gourd and chicken floating in water” (“เหมือนเมื่อวานเลย แต่คราวนี้เป็นฟักกับไก่แช่น้ำ”).

The menu items which my cousin was describing, of course, were clear entrée soups with vegetable(s) and meat (kaeng juet แกงจืด) which are very common in Thai home cooking (not so much in the context of Thai restaurants overseas). You can cook anything in clear broth; you can pair watercress with pork, bamboo shoot with chicken, or cabbage with fish balls and pork, etc. 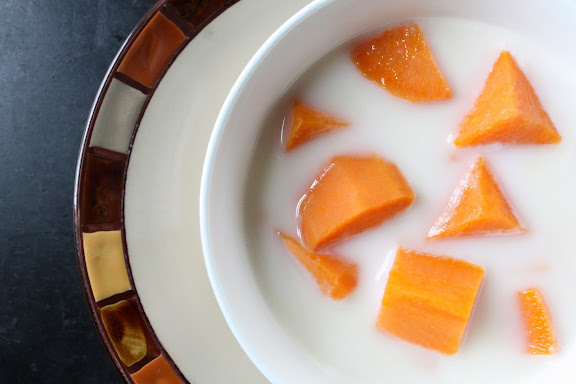 Sweet potatoes can be cooked the same way, but can’t consider themselves ordained. Nope.
My then six-year-old cousin saw it as the same dish that manifests itself in different ways. In other words, the water (broth) is the constant factor in these different permutations of the same soup, and – to use his language – it is the stuff that “floats in it” that varies from day to day. And though we’re still laughing at him today, I can’t help thinking that my cousin perhaps wasn’t as clueless as we think he was. Approaching food as a tabula rasa, he saw things with no preconceived ideas.

Take this kaeng buat for example. If it had been served to my cousin back when he was in first grade, he could very well have come home reporting that he’d had some bananas floating in coconut milk for dessert and that it happened again a few days later with pieces of sweet potato (taro, lotus seeds, pumpkin, etc.) floating in the same coconut milk. That’s not how most people would describe it, but certainly you can’t argue with him.

And this is why I’ve included sweetened coconut milk as one of the basic components in Thai cuisine which allow you to create different variations the number of which is limited only by your imagination.

Now let’s ordain some bananas, shall we?

You start off with coconut milk that is not too thick and not too thin. About a cup (8 fluid ounces) of it per serving works for me. Heat that up in a small saucepan over medium heat along with a couple of not-too-ripe red or burro bananas (or Manzano in a pinch) which have been peeled and quartered. and bring the whole thing to a gentle boil (we don’t want to stew the bananas; we simply want to bring the temperature of the coconut milk up to the point where it’s hot enough to be able to soften the bananas a bit). Then you add the bananas to the simmering coconut milk. Increase the heat a little at this point to restore the simmer as the temperature of the coconut milk will have dropped. Stir a couple of tablespoons of granulated sugar to the pot along with about very small pinch (1/8 teaspoon) of salt. Let the bananas cook for about 2 minutes. Turn off the heat and cover the pot. Let the residual heat continue to cook the bananas for another 2-3 minutes.

Give it a taste. If necessary, add more sugar; be sure to add it when the coconut milk is still warm otherwise the sugar won’t dissolve readily.