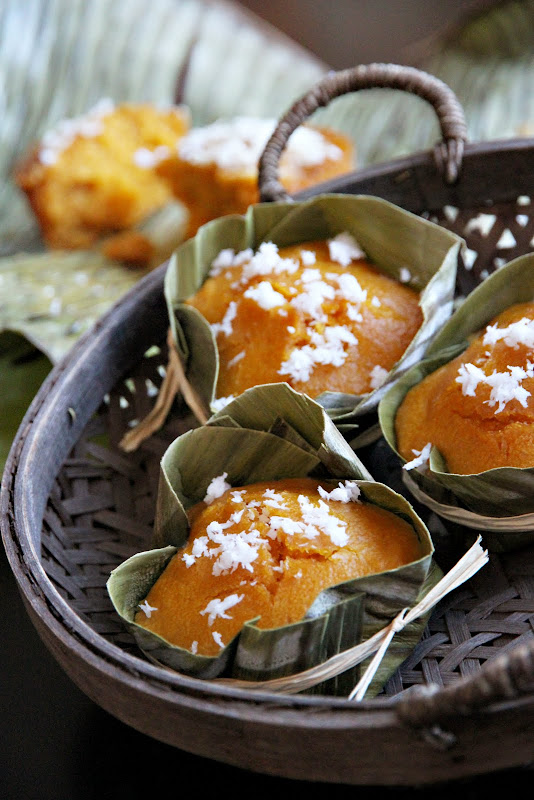 In the midst of all the uncertainties in my childhood, there was one thing I was sure of: every Saturday at 10:00 am, on the dot, our doorbell would ring. And, unfailingly, the opened front gate would reveal a tiny old lady hawker, Pa (“Auntie”) On, who always had on her face a huge grin that unveiled betel-stained teeth speckled with gold fillings and on her shoulder a bamboo stick on which two baskets full of traditional Thai desserts hung.[1]

With its inhabitants always fully committed to buying enough of her various steamed treats in banana leaf packets to last them a week at a time, Pa On never had to wonder if she’d make a sale at this house. The moment she set her baskets down at the front gate, she knew someone would come out with a wallet and she would depart with her baskets weighing about half of what they did when she’d arrived.

This house was her Destination Unload Point.

I was glad that was the case. You should have seen how small Pa On was and how huge and heavy those baskets were. 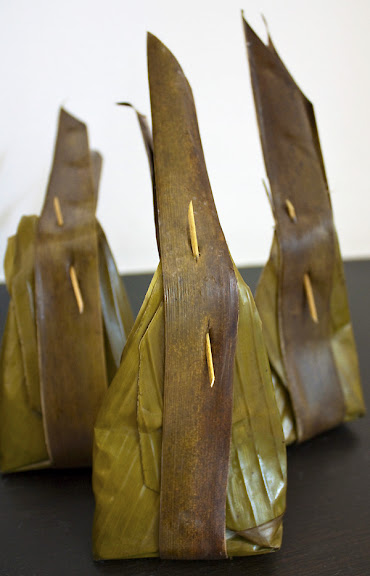 On the day Pa On didn’t ring the doorbell, we waited and waited only to learn later that she’d been fatally hit by a motorcyclist just a couple of blocks from our house. I can’t recall how exactly our household responded to the news, but I remember being angry.

I wasn’t angry at the motorcyclist (though I should have been). I wasn’t angry at fate. For darn sure, I wasn’t angry that our best, most reliable source of treats was gone; there were other vendors. At the age of eight when the incident happened, I was too young to think along those lines.

Irrational as it may seem now, this made sense to me at that time: I kept thinking that if people had bought more of her desserts that day, her baskets wouldn’t have been heavy and the frail woman would not have wobbled into the path of that reckless motorcyclist. I kept thinking that if people had bought all of her desserts prior to that point, she would have been done for the day and gone home early with two empty baskets instead of lying on the side of the road like she did when they found her.

Well, the frustration didn’t last that long; the yearning for good-quality Thai desserts, on the other hand, has stayed with me. Khanom Tan (ขนมตาล) was one of Pa On’s prides.

The dessert is made of rice flour, fresh pulp of toddy palms (or sugar palms), coconut milk, and sugar. Traditionally, no leavening agent is used; the natural yeast present in the pulp of toddy palms, Saccharomyces exiguus (Candida holmii or Torulopsis holmii), is what gives rise to this steamed cake resulting in a light, fluffy texture similar to South Indian idli.

The prepared batter is left to ferment in the sun for a few hours to allow the natural yeast to do its thing. This is one of those desserts that cannot be rushed. Skip this step and your toddy palm treats are tough, dense, and devoid of the trademark “yeasty smell” unique to this much-loved traditional Thai dessert.

Once the batter has risen, it is spooned into a banana leaf packet like this or this, topped with grated fresh coconut, then steamed. These days, they’re often steamed open-faced in banana leaf cups or in small heat-proof ceramic cups. 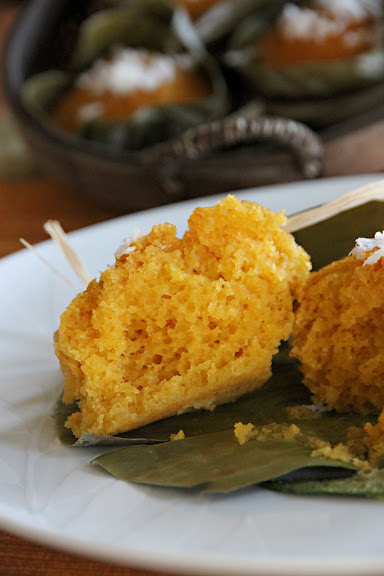 In this case, I use pumpkin purée instead of toddy palm pulp as I figured most of us don’t have access to fresh toddy palms. The consistency of pumpkin or squash purée is identical to that of strained toddy palm pulp; the taste is also close enough.

Unfortunately, pumpkin or squash purée does not come with the type of wild yeasts we need. [I have made little steamed squash cakes similar to this once before, and realized that even though the end product was good, it lacked the texture of khanom tan which I wanted to mimic.] Dry yeast and baking soda are used to create the effects traditionally achieved by those little critters. 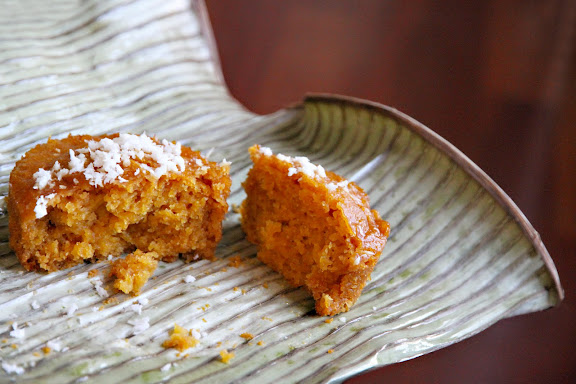 Topping:
40g of grated coconut meat (this type that comes frozen is best; I grated my own using a bunny.)