By Leela on February 7, 2012 in She Deglutenizes, She Simmers, She Thais 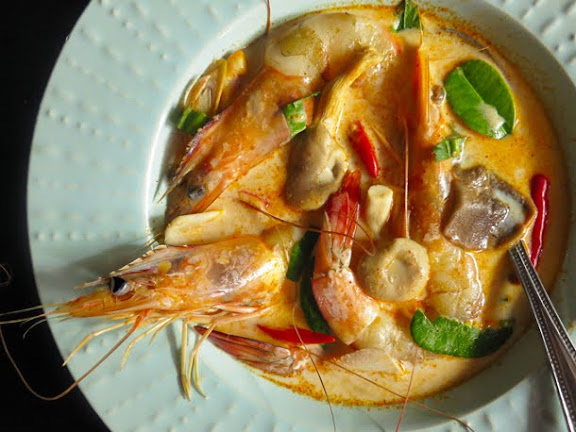 After I’d made a passing reference to creamy Tom Yam Kung earlier, people have been asking me to talk more about this newer variation of Tom Yam which has taken Bangkok by storm in the last several years. Purists, as you may have guessed, are less than thrilled about it. (Dairy in a traditional savory Thai dish = anathema.)

The late former prime minister of Thailand, Samak Sundaravej, recounted the time when he visited the kitchen of “a certain famous hotel by the Chao Phraya river” some years ago and saw the chef add milk [1] to Tom Yam Kung. Puzzled, the food critic-cum-politician asked the chef for the reason only to be informed that, “The foreigners love it.” Shortly after the incident, he visited a noodle shop on the way to work. The cook, wrote Sundaravej, started fulfilling his order, then stopped to spend an inordinate amount of time rifling through stuff in an ice box. As he’d later learned, the guy was searching for a box of UHT milk to add to his order of Tom Yam noodles. Exasperated, Sundaravej pressed him for a reason. “Well, if we could add milk to Tom Yam Kung, why can’t we add milk to Tom Yam noodles?” was the answer.

And that’s when the outspoken ex-premier lost it. This chapter of Sundaravej’s book detailing his various eating expeditions ends with, “I really want to know what those who insist on adding milk to Tom Yam want to achieve.” [2]

I don’t think he ever got an answer.

Is there an answer?

Creamy Tom Yam is a raging trend, and trying to stop it, regardless of how justified the attempt, is akin to creating a river dam out of your two hands. You can’t win. I don’t quite know where I stand on the issue, but here’s a recipe for those who have asked for it.

Some tips on how to make creamy Tom Yam Kung and the recipe can be found on the debut post of my new bi-weekly (for now) column on Serious Eats.

[1] For those wondering why coconut milk, a traditional Thai ingredient, is not used to create creaminess in Tom Yam, the reason is most likely because a cousin of Tom Yam that is made with coconut milk already exists.