By Leela on November 29, 2008 in She Deglutenizes, She Steams, She Thais, She Veges 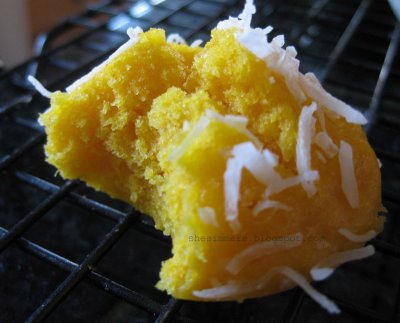 These little squash cakes are inspired by khanom tan (ขนมตาล), a traditional Thai dessert made of rice flour, the pulp of the sugar palm fruit, palm sugar, and coconut milk. The batter, traditionally made with no leavener, is left to ferment in the sun for a couple of hours to create the natural “sourdough” effects then steamed in fresh banana leaf containers.

As much as I’d like to tell you that I am a culinary genius who has created a new dish based on a traditional idea, I can’t. The truth is, I started out wanting to make the traditional recipe but ended up with this version only because I was too lazy to replenish my kitchen pantry and did not have three out of the four most important ingredients on the day I wanted to make these cakes.

These golden little beauties turned out delicious, though. They’re soft, fluffy, and only very mildly sweet. In fact, they are more like tea snacks than desserts. I remember seeing my grandmother make khanom tan once when I was little. The color and consistency of the pulp (mesocarp) of the toddy palm fruit looked exactly like those of winter squash pulp which has been cooked and mashed. 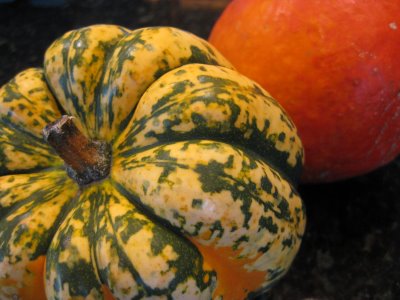 Having a Sweet Dumpling squash lying around, I decided to put it to good use. Any winter squash would do, actually. All you need is a winter squash big and “meaty” enough to yield about 1 1/2 cups of mashed flesh. An equal amount of canned pumpkin puree would work too. 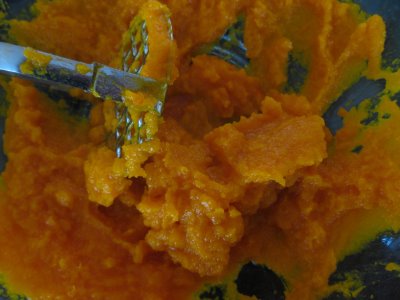 To the mashed squash pulp, one cup of sugar, a pinch of salt, a cup of homemade evaporated milk, and a teaspoon of coconut or vanilla extract are added. The traditional recipe calls for coconut milk which can be used instead of the evaporated milk. (If you opt for the coconut milk, this dessert will, of course, become not only gluten-free but also vegan.) Gently whisk in one cup of rice flour and one teaspoon of baking soda. 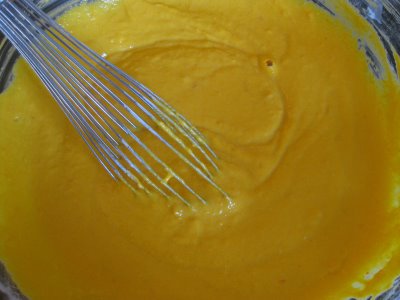 While getting the steamer ready, drop the batter into small heatproof molds of your choice and top with grated coconut. I used bite-sized ceramic molds which I purchased from a market in Bangkok last summer. I promise you that the mere sight of these little molds will automatically trigger fond childhood memories in any Bangkokians over 20 years of age. No longer commonly used, these molds were once the standard vessels of steamed custard-based Thai desserts. Street hawkers carried around tons of freshly made desserts made in these molds. You would flag down one of these movable hawkers who would then create a personal food park for you right then and there. You would then, in the vendor’s presence, eat these little gems right out of the molds in which they were steamed. At the end of the snack session, the vendor would tally up the bill according to the number of empty molds. You can also use small ceramic ramekins; they just take more time to steam. 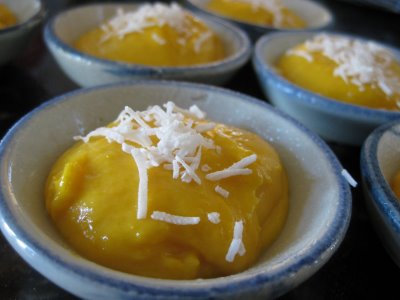 The cakelets are then steamed over medium-high heat for approximately 15 minutes or until the tops crack open, exposing the fluffy and spongy interiors. 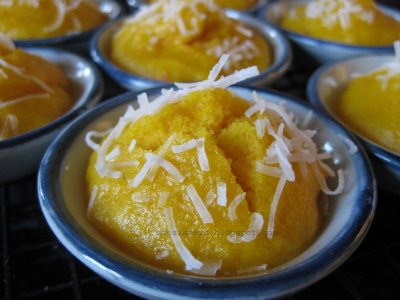 The cakes are then to be unmolded and cooled on a cooling rack. They keep in a lidded container in the refrigerator for up to a week.