The Best Pumpkins to Use in Thai Cooking

By Leela on September 16, 2013 in She Braises, She Deglutenizes, She Remixes, She Simmers, She Stocks a Thai Pantry, She Thais 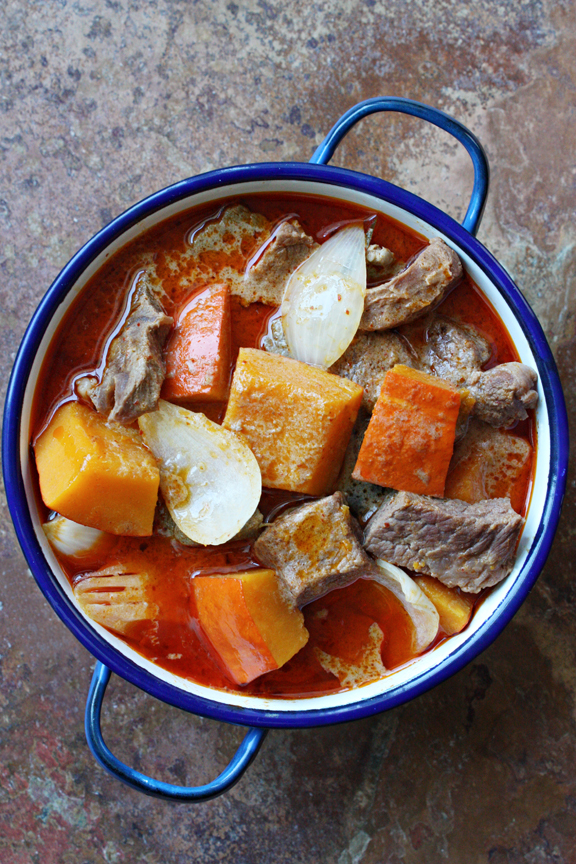 I’ve long touted kabocha squash, a pumpkin/squash heavily used in Japanese and Korean cooking, as one of the best among the various types (commonly found in the United States) to use in Thai cooking. This is because its texture and flavor are very close to those of the type of pumpkin commonly used in Thailand. I still stand by my opinion.

However, as I was rereading my post on stir-fried pumpkin with eggs in which I describe kabocha as having chestnut-like qualities, it suddenly occurred to me that I had entirely forgotten about another type of pumpkin/squash that I like but, for some reason, had only used in ‘Western’ dishes: potimarron*.

With the ‘marron’ part (French for ‘chestnut’) staring at me in the face all these years, I don’t understand how I’d never made the connection until now. [See this post by David Lebovitz on Roasted Potimarron].

So, as an experiment, I started using potimarron in dishes where I would use kabocha and, in all cases, potimarron outperformed kabocha. In fact, I have been on a potimarron kick for the past 3 weeks, and it seems I won’t quit until they disappear from the market. This stuff is delicious. 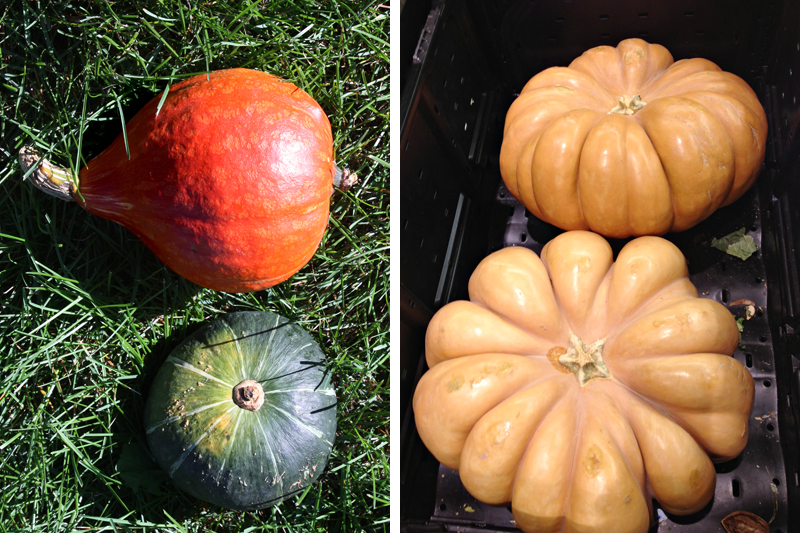 Left: Potimarron (top) and kabocha (bottom)
Right: fairy tale pumpkins (also labeled “calabaza” (Spanish for ‘pumpkin’) in some places
But this, of course, is a personal preference. At the end of the day, you want any hard squash/pumpkin that:
1. Doesn’t have strong ‘squashy’ scent.**
2. Has low moisture content resulting in the texture that the Thai describe as nuep (หนึบ) (which roughly translates to something that encompasses both firmness and chewiness) once cooked.

So far, I have found three types of hard squash/pumpkin in the US market that fit the bill: kabocha, potimarron, and fairy tale. All of them have advantages and disadvantages, but all of them work wonderfully in Thai dishes—both savory and sweet.

Potimarron, if you ask me, offers the best flavor and texture. However, it is available (in the US, that is) only in the autumn whereas kabocha is available at Asian markets and some mainstream grocery stores pretty much all year round. Also, in some circumstances where this matters, kabocha offers two things potimarron doesn’t: 1. the color contrast of its dark green skin against the orange/yellow flesh, 2. the ability to stand erect unassisted due to its turban-like shape (which comes in handy when you cook it whole and stuffed); with the way it’s built (like a large onion), potimarron behaves like me after half a glass of beer. [Added September 17th, 2013 – I take that back; if you trim off the little knobby thing on the bottom, many potimarrons can stand unassisted.]

While both of these types of squash have edible, soft (and delicious!) skin, fairy tale pumpkin comes with thick, waxy skin that is best removed from the flesh before you use it in the recipe (have fun removing the skin in those deep crevices). Also, unless you feed a whole lot of people, forget cooking a fairy tale pumpkin whole or stuffed; these pumpkins are huge (10+ pounds). And that’s why most of the time they’re sold in cling-wrapped pre-cut wedges at both Hispanic and Asian stores. This means that you need to use it almost right away before it goes bad in the fridge. On the other hand, kabocha and potimarron, which you acquire whole, can stay at room temperature for longer periods of time before you cut them open.

To make beef matsaman with potimarron (shown at the top of the post), follow my recipe for beef matsaman, substituting the potatoes with potimarron. You’re going to need half a medium-sized (3-4 lbs) potimarron. Scrape off the seeds and fiber very well and cut it into 1.5-inch cubes. There’s no need to remove the skin. I didn’t add any peanuts to this pot of matsaman; you can, if you’d like.

Note that pumpkin is usually not used in matsaman curry (potato is used almost exclusively in the Central version of the curry); I’m just, as mentioned above, on a potimarron kick.
__________
Some pumpkin recipes:
Pumpkin-Mascarpone Bourbon Cake
Steamed Pumpkin Cakes in the Style of Thai Toddy Palm Cakes
Stir-Fried Pumpkin with Eggs
Panaeng Curry with Pork and Kabocha Squash
Thai Spicy Mixed Vegetable Soup (Kaeng Liang)
__________

*Also known as red kuri squash among many other names.

**That’s why I don’t like butternut in Thai cooking, even though some readers do. Acorn and delicata are milder, but they are nowhere as good as the three recommended here, in my opinion.

3 Responses to The Best Pumpkins to Use in Thai Cooking