By Leela on January 21, 2013 in She Rants and Muses, Uncategorized 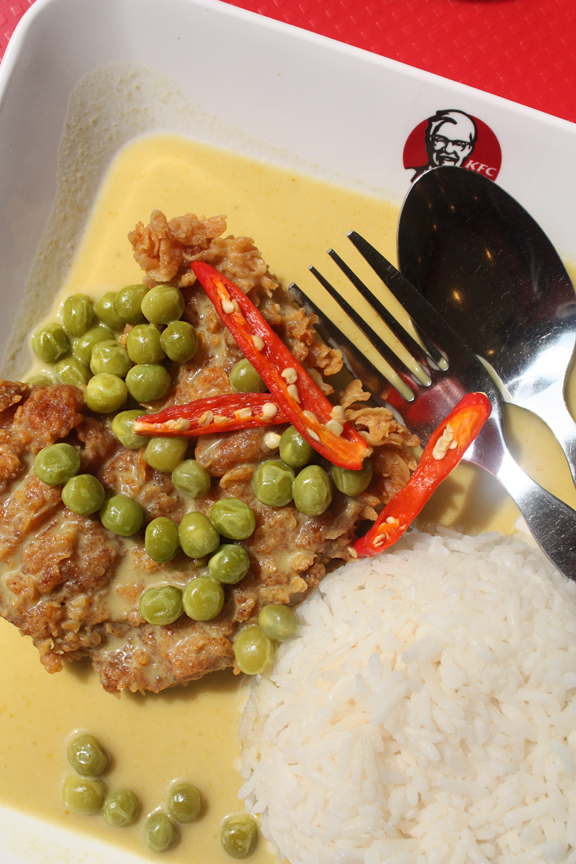 Originally, this was supposed to be a short post about KFC Thailand’s fried chicken with green curry sauce, how funny the advertisement for this same menu offering at KFC Malaysia is (“So authentic even the Thais want it“), and how surprised I am to have found recently that it is quite good [1]. But after having given it more thought, I’ve found myself going off in a different direction. What this has become is the first of a two-part piece on why Thai food as found in most Thai restaurants overseas is the way it is, i.e. anything from slightly different to almost unrecognizably different to perfect-fodder-for-Thais-eating-at-a-Thai-restaurant-overseas-to-photograph-and-show-to-their-Facebook-friends-just-how-ridiculous-it-is different from what you find in Thailand.

At a risk of being too simplistic, it all comes down to the need — be it real or felt — to please (the locals). Ideally, you would be able to export food as it is made in one culture to another without any alteration and have it wholly embraced by the locals. But in reality, it’s not so easy. Many success stories of American fast-food chains in different countries around the world testify to this fact: indigenize or go home (or indigenize poorly and be mediocre). I know that the scope of this is unfairly narrow, but this is a blog post, not a thesis. So I’ll just cover one aspect of it which is most relevant to the subject of this blog: the making of Thai food.

So I’m thinking: If we want to understand the Americanization of Thai food, perhaps we should look first at the other side of it: the indigenization of American food. 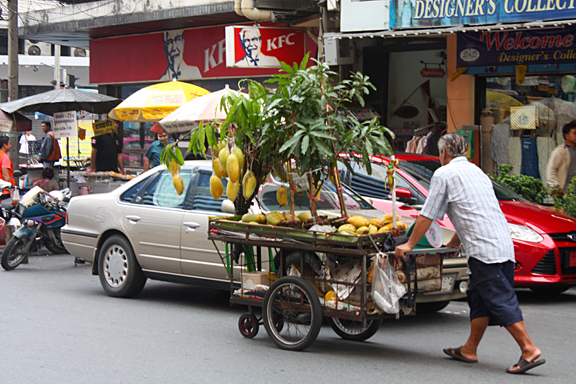 I snapped the above picture as I was on my way to interviewing the owner of a khao man gai shop in Bangkok (I thought this mango vendor was so creative in the way he tied to his cart branches of a mango tree with mangoes still attached to them — a mobile mango grove, if you will. This is not at all a common sight in Bangkok, by the way. It looked cumbersome, and the man was struggling to push his cart in a straight line due to the mango branches obstructing his view. But it also seems like a brilliant marketing strategy. Even if he can’t get you to buy, he certainly makes you look.)

But that’s not the point.

When I posted this on my Facebook wall, some people made comments about the KFC outlet in the background (which I hadn’t noticed prior to that point) and how the popular American fast-food chain stood in stark contrast to the fresh, natural, local fruit in the foreground. How could the Thai people eat, let alone like, that junk when they have all the fresh, delicious Thai food available in every corner of the city?

Fair questions. They also got me thinking.

Having thought about the issue, I’ve come to one conclusion: the Thai people eat at KFC and McDonald’s, arguably the most successful American franchises in the history of Thailand, because, well, they like them.

These American fast-food chains represent something new, different, and western. Considering that a bowl of noodles costs 30 baht (US$1) on the average and the daily minimum wage across the country is 300 baht (US$10), a meal combo at one of these restaurants which falls anywhere within the 120-300 baht (US$4-10) range, is expensive. Is KFC fried chicken better than Thai fried chicken? Depends on whom you ask, I guess. All I know is that munching on a fried chicken drumstick on the street isn’t working very well as a status indicator compared to eating a piece of KFC fried chicken with a knife and fork in an air-conditioned place.

One thing for sure: the Thai people don’t eat these American fast foods because they’re short on time — and I laugh out loud every time it’s suggested — otherwise they’d go for a rice-curry shop on the street; they eat at these American fast-food places because they enjoy the foods and, for some, to be seen as those who can afford them. After all, these are not stops on the highway where you go grab a shake and a couple of fries while filling your car with gas. These fast-food restaurants are located in the poshest of Bangkok malls where people go sit and linger for a long time — so long that McDonald’s Thailand recently came up with the new one-hour rule.

(Brand perception is different in Thailand. In Chicago, Krispy Kreme doughnuts can be found at Target, Walmart, and gas station convenience stores. It’s not at all considered a fancy brand. Quite the opposite is true in Thailand. People lined up to get a taste of these American doughnuts when the store first opened at Siam Paragon, a high-end mall, home of luxury brands such as Prada, Versace, Bvlgari, Chloé, and Cartier.) 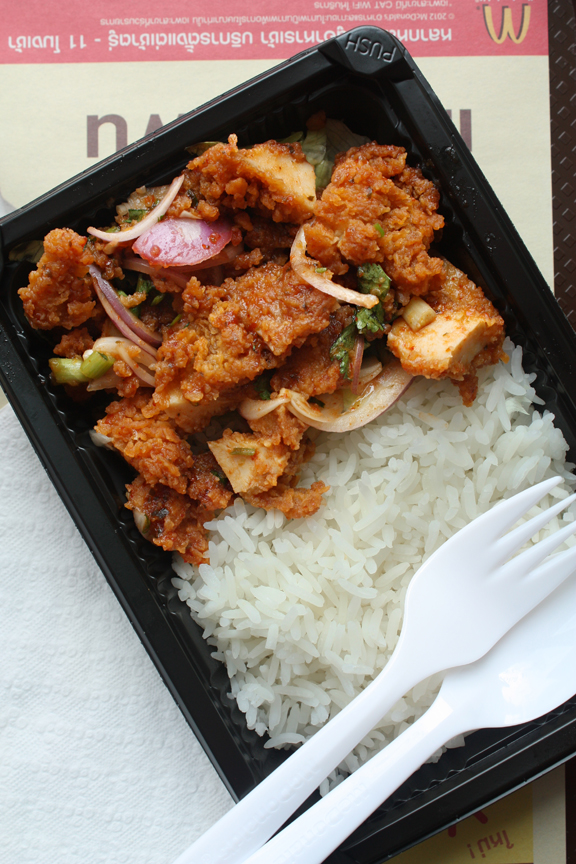 KFC and McDonald’s have been very good at keeping their western appeal while offering things that are familiar to the locals’ palates. They present something foreign in such a way that the locals’ minds can understand and appreciate.[2]

An example off the top of my head: KFC and A&W. The two used to be close rivals. A little more than a couple of decades later, it’s clear who’s doing better. While KFC is practically everywhere doing well with their American-style fried chicken along with fried chicken with green curry sauce over rice, laab-flavored fried chicken over rice, and their spicy fried chicken salad over rice, among others, A&W is nowhere near as successful. Want a waffle and a root beer float? You can visit that lone A&W store in Siam Square or travel to one of their small outlets located in selected — no, not luxury malls — gas stations outside the city center. Their half-hearted attempt at indigenization (fried chicken with teriyaki sauce …) doesn’t seem to have done much good.

McDonald’s has also squashed their other once-rivals over the years as well. Many, including Arby’s, have tried and failed. Could it be because they simply couldn’t compete with the Golden Arches? Or could it be because they didn’t offer McJok rice congee for breakfast or McNamtok spicy meat salad with rice for lunch and dinner?

Are these foods good? Subjective.


[1] “Good” as in I like it, but don’t ever find myself up at night craving it. Also, I don’t usually eat at KFC Thailand, because I don’t like their fried chicken and I hate their mashed potatoes and funky-smelling gravy. But if I’m in a situation where I must eat there, I will, without a doubt, go for their fried chicken with green curry over rice. Look down on it all you want, KFC Thailand’s green curry sauce is better than what passes as green curry at many Thai restaurants I’ve visited in the US, Europe, and even Southeast Asia.

[2] This reminds me of something unrelated (or not?): the evangelization of foreign religions in Thailand. In order for the locals to accept a foreign god, missionaries have had to use the kind of language that the locals set aside for Buddha, Buddhism, as well as the monarchy and all things related to it. They could not have introduced their faith as being equal to or better than the local faiths and systems without invoking the familiar. This is indigenization. Something to ponder.

32 Responses to The Indigenization of Thai Restaurants Overseas: Part One – American Fast Food Chains in Thailand