By Leela on September 20, 2009 in She Deglutenizes, She Thais, She Veges 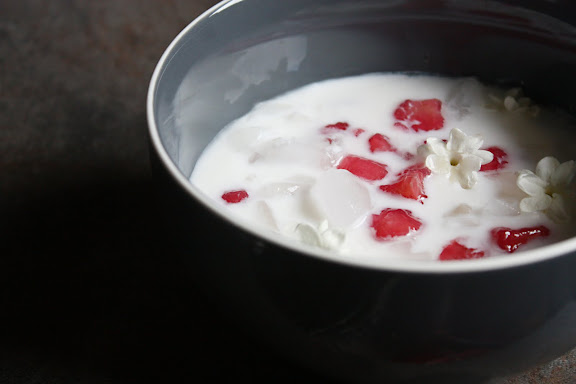 Shaved ice desserts and the year-round steaming hot weather of Southeast Asia go together. No further explanation is needed for that statement. Everywhere you look, you see shaved ice dessert stalls. And always sitting gorgeous in the midst of many, many cold dessert components is Tab Tim Grob[1] (ทับทิมกรอบ).

This beautiful dessert stands out. It really does. In fact, if I were to follow the dubious tradition of crowning food items (cf. durian is the king of fruit and mangosteen is the queen of fruit), I’d say this exquisite, refreshing, and fragrant cold dessert more than deserves to be put on the throne. 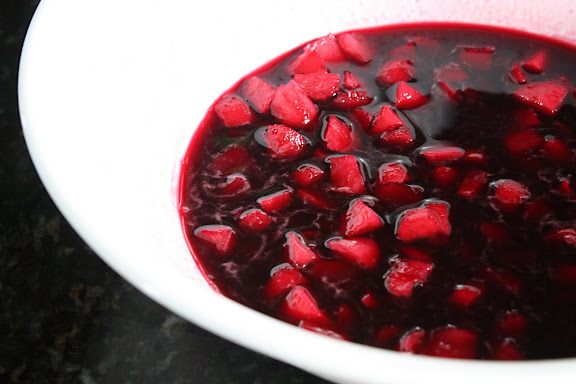 Chestnut dice soaked in beet juice.
This is without a doubt one of the most loved desserts in Thailand. An indispensable star component among the vast varieties of nam khaeng sai mix-ins, these ruby red mock pomegranate seeds also hold their own superbly as a stand-alone – something only the most worthy of mix-ins can do.

I don’t usually spend much time dwelling on the origin of the name of this dessert. When I come face to face with Tab Tim Grob, I focus more on eating it than analyzing whence the name comes.[2] But here’s what I think. Some people — actually the majority of them — call this dessert, “Red Rubies” perhaps believing that that English designation represents both the Thai name and the appearance of the dessert. Though this is not outright wrong, I think it’s a misnomer. 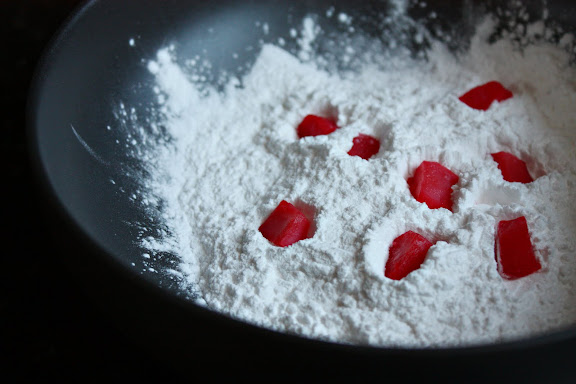 Tab Tim (ทับทิม) is the Thai word which can refer to both ruby and pomegranate (possibly because its seeds are bright red like ruby). So Tab Tim Grob, which literally means “crunchy tab tim,” presents a bit of a challenge: which tab tim is in view here? Does Tab Tim Grob refer to “crunchy red rubies” or “crunchy pomegranate (seeds)”?

We’re not going to go into the issue of whether ruby is named after pomegranate or the other way around, as that is irrelevant (though interesting). The question should be: which of these two things is Tab Tim Grob made to resemble? 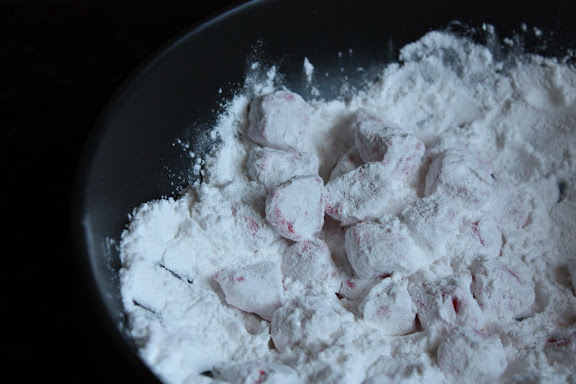 Without going any more deeply into this and putting myself at a risk of losing all of my six readers, I’m just going to say that just by looking at the dessert, it doesn’t take much for one to come to a conclusion that the dessert aims to mimic the seeds of the pomegranate fruit, not ruby.

The gelatinous tapioca on the outside of each Tab Tim Grob kernel mimics the edible flesh of a pomegranate aril and the crunchy water chestnut on the inside mimics the inner seed itself. True, the color of pomegranate seeds is ruby red. True, pomegranate seeds look like little red jewels. But first and foremost, this dessert is fashioned after Tab Tim the fruit, not Tab Tim the red precious stone.

Had the dessert been intended to be an edible version of Tab Tim the jewel, the color alone would have sufficed and the tapioca layer would have been superfluous. 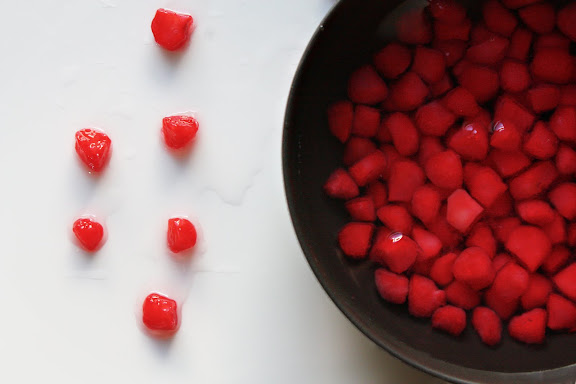 For this reason, I am proposing that “mock (faux?) pomegranate seeds” represents a more appropriate English designation for this dessert than “red rubies.”

And this is the reason why calling the green version — a new creation — of Tam Tim Grob that is tinted with the juice of pandanus leaf, “crunchy emerald (มรกตกรอบ),” only perpetuates the misnomer.

But, oh well. This whole thing is not such a big deal, and it’s not like I always dwell on things like this … [3]

To redirect our focus back to the dessert itself, the intrinsically bland mock pomegranate seeds form a perfect ensemble with the coconut milk-based syrup. Their gelatinous and crunchy texture, when chewed together along with the crushed or shaved ice, also makes for an interesting oral sensation. A dessert that is pretty to look at as well as refreshing and satisfying that also provides a fun eating experience — you can’t beat that. 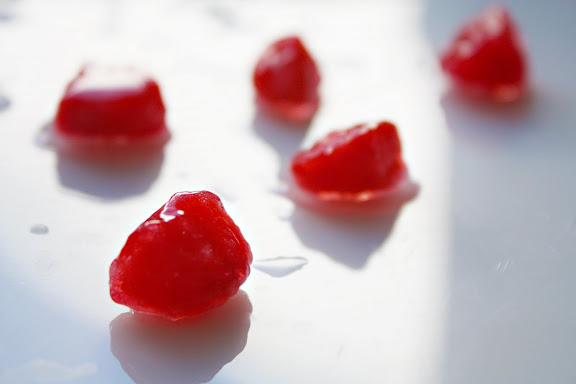 Tab Tim Grob is so easy to make. Any Homo erectus with fire-making skills can produce excellent first-time results. The only difficulty for some, myself included, is getting over the fact that edible — albeit synthetic and chemical-laden — food coloring is traditionally used to achieve the bright red color. If you really can’t get over that, you have two options: 1. omit the red food coloring and end up with a colorless version of Tab Tim Grob which tastes just the same, or 2. use red color from natural sources (fresh beet juice works very, very well). 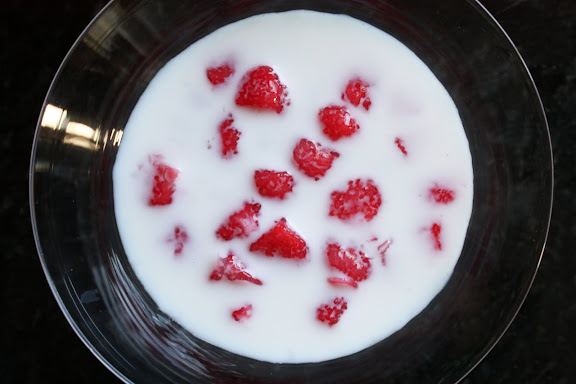