Barack Obama’s Official Dinner in Thailand: My Thoughts on the Menu 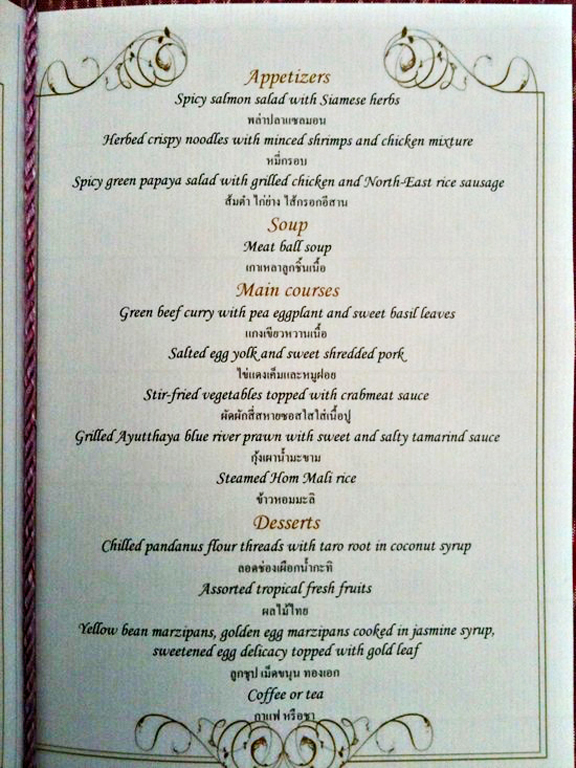 I’ll let other people who are qualified to deal with the other aspects of the US president’s trip to Asia and his stop in Thailand do their thing. I’m all about the food here. So while the economists and political analysts are discussing things such as the US-Thai bilateral trade agreements, I’m turning my readers’ attention to the menu of the official dinner at the Thai Government House to welcome President Obama. This happened less than 24 hours ago; that tells you how giddy I am.

Firstly, I’d like to thank vocalist, Mary Ungrangsee, who was at the dinner last night for having graciously allowed me to use the photo which she’d snapped of the menu. (The original photo was posted on Twitter by @MaryUngrangsee.)

Does it matter what they served the president?

In the context of my blog, yes. If you’re a long-time reader, you know everything is analyzed to death here.

But seriously, though, this menu illustrates what I think about Thai restaurants overseas — something I’ve been mulling over for months now for the book which I’m writing).

[Maybe I’m reading too much into this. For all I know, it could have been just a group of chefs who came up with these menu items on a whim. It could have been one person (not entirely inconceivable) or a group of influential people in the Thai government (who may or may not know much about food) dictating these menu items to the chefs. [Added December 12, 2012: I’ve recently found out from Vichit Mukura, Executive Chef of the Mandarin Oriental Bangkok, who was in charge of executing the dinner that he was the one who came up with the menu. However, the original plan was changed quite a bit due to the input from the prime minister who communicated her wishes through her people. Green curry beef was one of the items on the proposed menu that remained. No word on what other dishes remained unchanged.] But to keep our conjecture optimistic and idealistic, let’s just say this menu was carefully, thoughtfully, and knowledgeably planned with the dual intention of showcasing the best of Thai cuisine and pleasing our guests.]

You need to be very familiar with the restaurant and street food scene in Thailand in order to detect the random dissonance of typical menu offerings at Thai restaurants overseas. At a given restaurant, you’ll often see dishes that are hardly, if ever, served under the same roof unless we’re talking the roof of a food court or a market where anything goes. Many of these dishes require the kind of specialized skills which often take decades to develop at the exclusion of others.

More on that later. Let’s look at this menu.

[Added November 30, 2012: Here’s a slideshow of the dishes I’ve put together for Serious Eats.)

Here are my thoughts (which are equally random, if not more) as I surveyed the menu for the first time and tried to make sense of it:

1. I’m glad mee krob (หมี่กรอบ RTGS: mi krop) was included on the menu. It may not be obvious to those who don’t read Thai, but that’s what “Herbed crispy noodles with minced shrimps [sic] and chicken mixture” is. Everyone likes mee krob. (Carrie Bradshaw certainly does.) I also think that the dish represents the flavor of Central Thai cuisine very well. The fact that it’s a classic dish that has survived domestic culinary changes and the bombardments of foreign influences throughout the past decades says a lot about it. The placement of this sweet item after a phla (“Spicy salmon salad with Siamese herbs”), essentially a more herbal (and some would say more sophisticated) cousin of Thai spicy salad, yam, is also a good call, in my opinion.

[Added November 20th, 2012: Here’s a picture of two of the appetizers (papaya salad, grilled chicken, and mee krob) which US Ambassador to Thailand, Kristie Kenney, had posted on Instagram. Do they look like what you’d imagined previously?]

Okay, so I guess we want to take the president to the Central Plains first with the first two items then put him on an express train to the Isan plateau. Fine. I guess we’re on a regional theme here as in let’s round up the best of all regions into this menu. Hooray.

I was wrong. I guess we don’t have the regional theme going on, after all, for we’ve got something that can’t really be classified geographically.

For those who are not familiar with this meatball soup, it’s not the kind of meatball soup you’ve seen in other cuisines. The meatballs in this context are the bouncy meatballs that you see in Thai or Vietnamese noodle soups. Granted, the chefs might have come up with a more sophisticated version of these meatballs (very likely), but still the name kao lao luk chin nuea (เกาเหลาลูกชิ้นเนื้อ) unmistakably points to the kind of soup you get at a noodle stand — the kind you won’t normally see at a place serving the three appetizer items previously seen.

4. Okay, so that’s kind of fun. We’ve got some sophisticated Central dishes punctuated by some jewels from the Northeast and a quick low-carb lunch at a street noodle stall. Let’s see what comes next.

5. Ooh. We have a samrap (สำรับ), a full meal ensemble, here: jasmine rice, green curry, salty and sweet sides of salted egg yolk(s?) and sweet shredded pork, and the grilled river prawn with sweet and salty (you mean sour?) tamarind sauce. These choices are so brilliant that I’m just going to pretend really hard that I understand the presence of the Chinese-style stir-fried vegetables with crabmeat sauce.

6. The fun doesn’t stop there. Check out the dessert. “Chilled pandanus flour threads with taro root in coconut syrup” is lod chong (RTGS: lot chong), oblong pandan-tinted rice flour dumplings served in sweetened coconut cream with the addition of steamed taro root and usually topped with crushed or shaved ice (the assembled dessert usually looks like this). I love this thing — this classic combo out of the countless combinations you could get out of the many, many shaved ice dessert components. It’s what I always got at my high school cafeteria and whenever I’m at a mall food court in Bangkok.

Great. After the noodle stall meatball soup, we enter the realm of something between sophisticated home cooking and upscale sit-down restaurant food. Now we’re kind of back on the streets, pointing at things at a shaved ice dessert stand. Alrighty.

7. Why not the quintessential coconut sticky rice and mango for dessert? I don’t know. Perhaps it’s too, uh, predictable? If tiresome predictability is what they want to avoid, then they’ve succeeded. I, for one, didn’t think I’d ever see lod chong at a state dinner. But, hey, we all just did. I would have gone with Thai-style coconut ice cream with assorted toppings. But that’s just me.

8. Or perhaps mango as part of the first dessert item is superfluous given what comes next is assorted tropical fresh fruits. What do you think?

9. Before concluding with coffee or tea, the menu with no discernible theme ends with some bite-sized mignardises sucrées in the form of Portuguese-influenced desserts. I thought that was a nice touch.

10. Notice that many well-known dishes, such as pad thai or pad see-ew, are missing. The reason, I think, is not so much that they’re considered too pedestrian, too unsophisticated for a state dinner (hello, meatball soup!), but it’s more because these dishes are one-plate or one-dish meals (stand-alone main courses, complete units unto themselves) which can’t be incorporated into a typical samrap without obvious clumsiness. So, yeah, no pad thai.

11. But wait, what about tom yam kung? How could they leave that famous soup out? Well, it could be that same tiresome predictability factor at play here again as in the case of coconut sticky rice and mango. More likely, I think, it’s because the menu already starts out with an herbal, spicy and sour seafood dish and has a shrimp/prawn dish with sweet-salty-sour flavor as a main course.

All in all, this reminds me very much of the menus of typical Thai restaurants overseas, especially those in the United States, i.e. no themes, anything goes. Whatever you want or whatever we think you want, we have it.

This stands in contrast to restaurants or food stalls in Thailand that tend to stick with one dish, one type, or one genre of food. In other words, there’s a tendency to go deep as opposed to wide. More on that in a future post. The only difference between an overseas Thai restaurant menu and this menu that I can see is that the former is primarily driven by profitability whereas the latter is driven by hospitality. Still interesting to see that even though the two may differ in terms of execution and level of expertise, when it comes to composition, they’re surprisingly very similar in their themelessness and the kind of cross-disciplinary expertise they require.

What do you think of this menu? What would you have done differently?

44 Responses to Barack Obama’s Official Dinner in Thailand: My Thoughts on the Menu