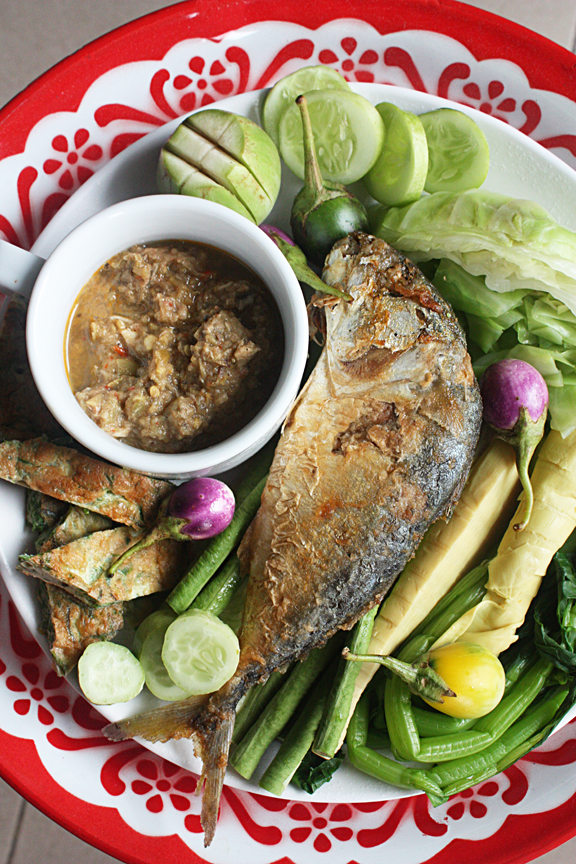 Relish. Dip. Whatever you call it, Thai nam prik (น้ำพริก RTGS: nam phrik), in my opinion, has remained the most mysterious type of Thai food among foreigners. And I don’t blame them. Thai restaurants outside Thailand, except those that cater primarily to Thai expats, don’t have relishes on their menus, so those whose exposure to Thai food is solely through their local Thai restaurants can forget about this. Those who know Thai food through street or restaurant foods on their brief visits to Thailand usually don’t know about dishes in this category to even look for them.

I’ll even go as far as saying that even foreign expats who have lived in Thailand for years, except for the most adventurous few, barely scratch the surface when it comes to their knowledge and experience of Thai nam prik dishes. And those who live with Thai people? Well, I have periodically received emails from Thai readers asking for advice on what to do to get their non-Thai spouses to go anywhere near these relishes (like I have any clue how to do that …).

But it doesn’t matter. If you’re a Thai food enthusiast, it will benefit you greatly to be familiar with dishes in the nam prik category. Even if you try some of these and end up hating every single one of them (nothing wrong with that), at least just knowing about them and how they roll will increase your understanding of Thai cuisine exponentially.

Why are relishes so important? Let’s see if I can convince you with the following reasons:

1. Relishes are among the oldest, most traditional foods among the inhabitants of present day Thailand. (I’ll expound on this with supporting evidence in a later post.) Along with rice and freshwater animals — even before chilies were introduced to us via foreign traders — we’d eaten seasoning pastes and all kinds of concoctions made with local herbs and peppercorns which became the prototypes of relishes, dips, and pastes that we know today. In other words, if you think of  “authentic” Thai food as food from ancient times (implication: before they were all messed up by “kids these days” — a notion I don’t necessarily agree with), it doesn’t get any more authentic than this.

2. Relishes form the largest group of dishes in Thai cuisine. No doubt about that. The late M.R. Kukrit Pramoj, statesman and prolific writer, has presented the idea of how incredibly vast this category of dishes is in the form of a parody of One Thousand and One Nights. In this version, our Scheherazade is a young consort of an imaginary Thai king who lived in ancient times, and she, if you’re familiar with the plot, saved her life not by telling stories but sharing Thai recipes. Wisely, she told the king she would begin with nam prik. I guess you can see now how the story ends.

Years of nightly relish recipe sharing have passed. “The consort has now become a very old woman,” writes Pramoj. “And she hadn’t even got to the lon recipes yet when she died of old age.” [1]

In case you were wondering just how many types of relish there are in the Thai repertoire, this should clarify the issue.

3. Thai relishes make you attractive. This is fact. This is objective. Here’s solid proof. When she was freshly crowned Miss Universe (Thailand’s first win) in 1965, Apasra Hongsakula, when asked what she liked to eat the most, said she loved chili relishes. It’s the answer that endeared her to the Thai people instantly. [2] And she’s beautiful.

Phongsi Woranut (ผ่องศรี วรนุช), a famous luk thung (country) singer from several decades ago also testifies to this fact in one of her hit songs, “I Eat Rice with Chili Relish” (กินข้าวกับน้ำพริก). The title of the song is the response from a beautiful young country girl to her city boy (as the song implies) suitor whose (lame) pick-up line is, “What do you eat to be so beautiful?” To which the girl replies in a gosh-do-you-even-have-to-ask-isn’t-it-obvious manner, “I’m beautiful because I eat rice and chili relish!”

I’ve introduced nam prik pao (น้ำพริกเผา RTGS: nam phrik phao) to you earlier as it is the most well known and consumed — not to mention the most novice-friendly — relish worldwide. But in the next several months, we will explore other less friendly and more obscure chili relishes together. Not today, though. Today we’re learning how to eat these relishes. It will not make any sense to learn about relishes without knowing first how they fit into a typical Thai meal and how to eat them. 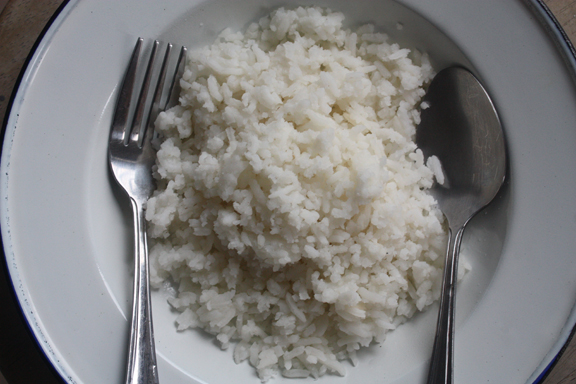 Relishes, like most Thai dishes, are meant to be eaten with rice. You need a plate of rice — your blank canvas, if you will. Those who have written me asking why I don’t have recipes for seasoned rice to eat with Thai food, this is your answer: the best rice to eat with a typical Thai meal is plain white rice. Trust me, you’re not improving a Thai meal by pre-seasoning your rice.

A relish set (shown in the cover photo at the very top) can be served as part of a larger meal; it can also be a complete meal. Today we’re eating nothing but rice and this relish set. After all, a relish is a complete dish unto itself, in my opinion. This is why we don’t consider relishes ‘condiments’. In other words, a relish is a dish, not a seasoning sauce or a dipping sauce. 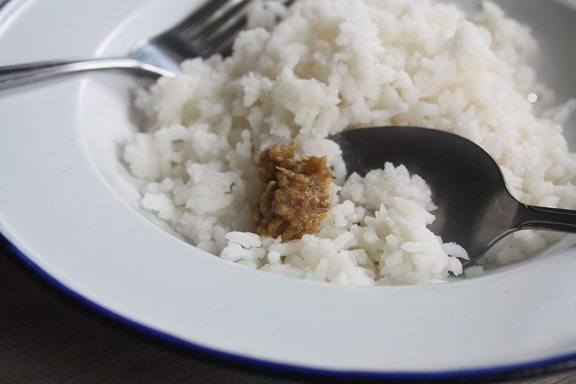 First, you take a little bit of the relish and put it on your rice.

Relishes come in different forms. Some are salsa-like; some that contain fish flakes (such as this one) are saucy and cottony; some are pasty; some come in duqqa-like coarse powder form. The Thai people who are familiar with different relishes instinctively know which ones can be eaten liberally in each bite and which ones are more concentrated and intense and need to be approached more cautiously. If you’re a novice, always start out with just a dab.

This one you’re looking at, nam prik pla tu (น้ำพริกปลาทู RTGS: nam phrik pla thu), is a mixture of grilled Thai short-bodied mackerels, grilled chilies, and some herbs. It’s one of the milder ones. 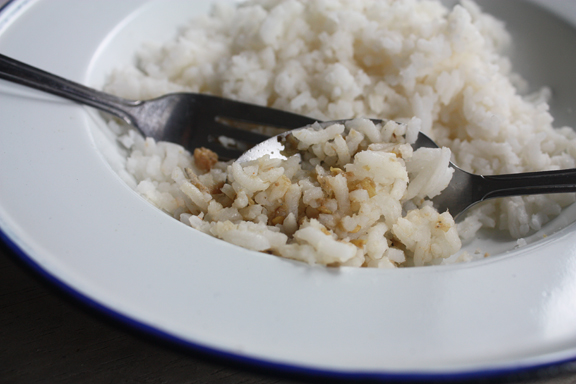 To khluk (คลุก) is, roughly speaking, to mix something into something else thoroughly. This verb is usually used in the context of cooking — most often in the context of mixing a dish with rice. Relishes are almost always khlukked into rice. In the old days, this was done by hand. Modern day khlukking is done with a spoon in your right hand and a fork in your left hand. No way around it.

And this is why the Thai people don’t eat rice with chopsticks. Banish from your memory the dining scene from The King and I movie wherein the king is shown eating with chopsticks. *shudder*

We don’t eat rice with just a fork in the dominant hand either. You can’t khluk properly that way.

Approach any Thai main dish with a spoon and a fork. Even noodle dishes (served on a plate) such as pad thai or pad see-ew are presented with a spoon and a fork for you to use. The only exceptions I can think of are Chinese-style noodles that come in a bowl, i.e. noodle soups. Those you eat with chopsticks. [Added November 29, 2012: Sticky rice is also an exception. Traditionally and in a family setting, you eat that with your hand. In a restaurant or formal setting, however, people tend to use a fork.) 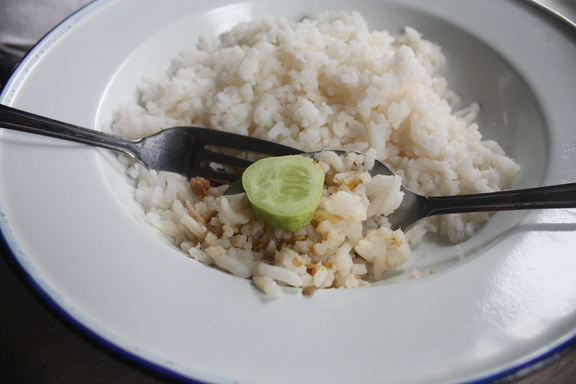 Relishes are usually served with lots of raw and steamed or blanched vegetables on the side. So take your pick. Vegetable-relish pairing is just about as fun as food-wine pairing. You pair this mackerel chili relish with cucumber, you get one taste. You pair the same relish with a different vegetable, you get another taste. So much fun. 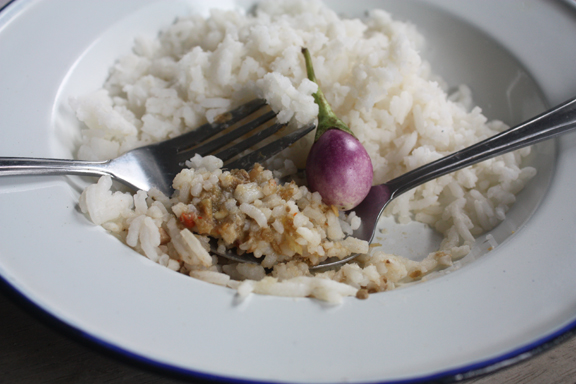 For the next bite, since you’re in a mood for crunchy vegetables, you follow the cucumber bite with a variety of Thai eggplant that’s usually eaten raw alongside a relish. These little eggplants are great. Crunchy. Slightly bitter. Lush fruity bouquet with gentle hints of ripe bananas and toasted coffee. Clean and crisp with a long finish. Oh, wait. 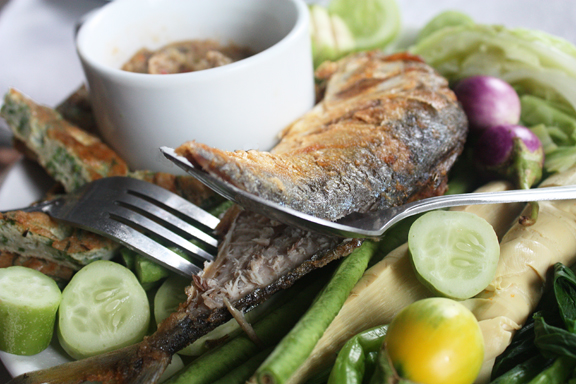 But, hey, we got a fried Thai short-bodied mackerel in the relish set too.

Note: this particular relish is a bit out of place here. The quintessential shrimp paste relish, nam prik kapi (น้ำพริกกะปิ RTGS: nam phrik kapi) and fried mackerel form the classic  combo. I’m aware that eating this mackerel-based chili relish with a fried mackerel is kind of superfluous (fish on fish); I just didn’t have the other relish on hand when I took these photos. You don’t need to write me. (Aunt Y, please put down the phone or I’ll post the video of you from the 70s singing Boogie Oogie Oogie on YouTube.)

Anyway, to get a piece of fish from the set, you also use your spoon and fork to fillet the fish. 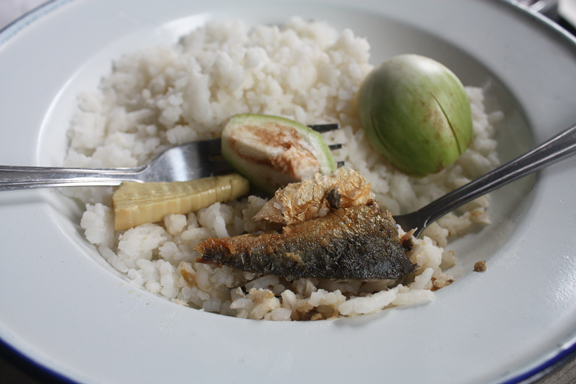 Then you eat that piece of fish along with a few bites of rice that has already been khlukked with the relish. Apparently, you can’t decide which vegetable to eat with this bite. Is that why you have a piece of blanched bamboo shoot and a Thai round eggplant on the plate, you vegetable hoarder? 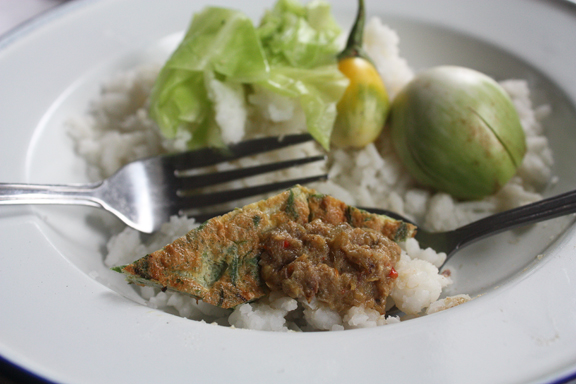 See, if you are dealing with one of the more concentrated and spicier relish pastes, you would want to stick with khlukking your relish with your rice. It’s the only way to balance things out: mixing a little bit of something very intense in flavor with a lot of something bland. But in this case, after a few bites, I, I mean, you have already figured out that, hey, this mackerel-based relish isn’t that spicy. So instead of khlukking it into your rice, you’re getting bolder and taking it straight. You just drop a spoonful of it on a piece of acacia omelet (you’ve seen this in my kaeng som post) and take it all in one big bite. Mmm. 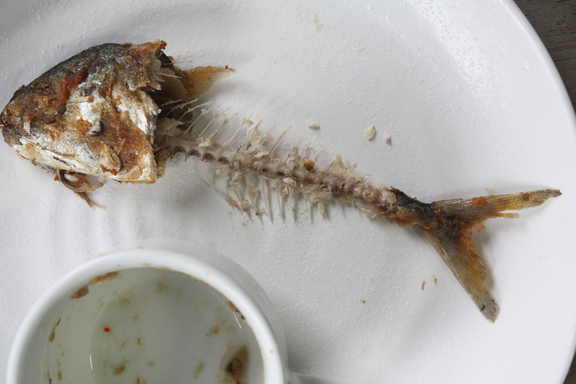 At the end of the meal, this is what’s left of the relish set. 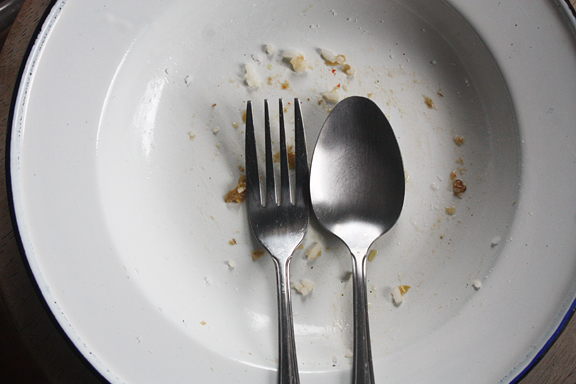 Then you do what the Thai people do to mark the end of a meal properly: you arrange your spoon and your fork in the manner shown above. This is not part of how to eat relishes per se; this is more about Thai table etiquette.

Have you noticed that when you’re eating at a Thai restaurant (especially in Thailand), even when you’ve finished your meal long time ago, the server still seems hesitant to clear your table? That could be because your spoon and fork aren’t arranged in this fashion.

Anyway, by this time, you’re already more attractive (if that’s even possible). Can you feel it?

Barack Obama’s Official Dinner in Thailand: My Thoughts on the Menu
From Mee Krob to Brassiere Eggs: My Food Highlights 2012