Thai Tea Cheesecake with Chocolate Crumb Crust from The Heart of the Plate: A Tribute to Mollie Katzen 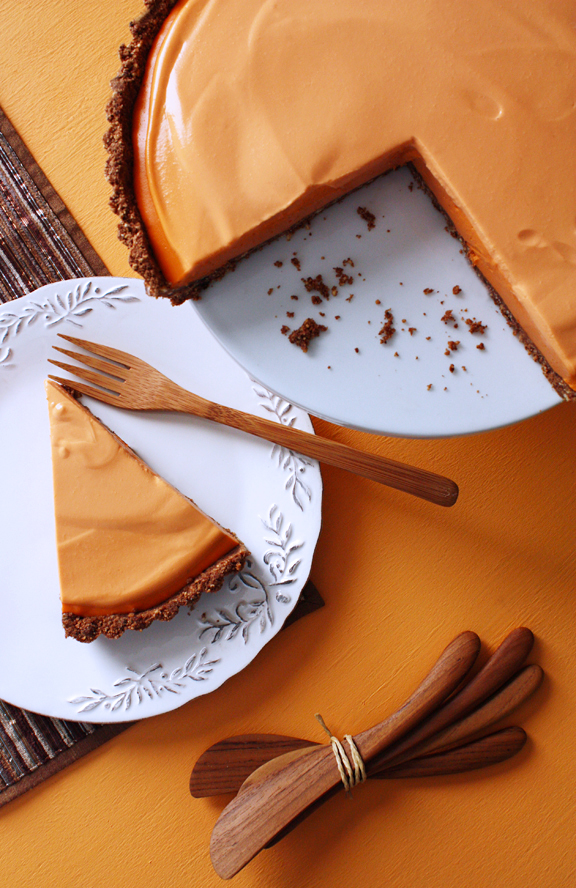 This post is about three things: a wonderful dessert, a great new book, and how the work of one woman—Mollie Katzen is her name—put me on the path that had led to this blog. I’ll address them one by one, in that order.

The Dessert:
I used to say that I didn’t think tea and tangy cultured dairy products belonged together. This cheesecake has proven me wrong.

This is an easy dessert to make. There’s no baking involved. And it is delicious.

I tested this recipe as it is written twice with consistently great results. (Incidentally, I also tested it using dairy-free substitutes for cream cheese and sour cream (Tofutti brand), and it turned out fine albeit just a tad runnier. The crust can also be made with melted extra virgin coconut butter.) 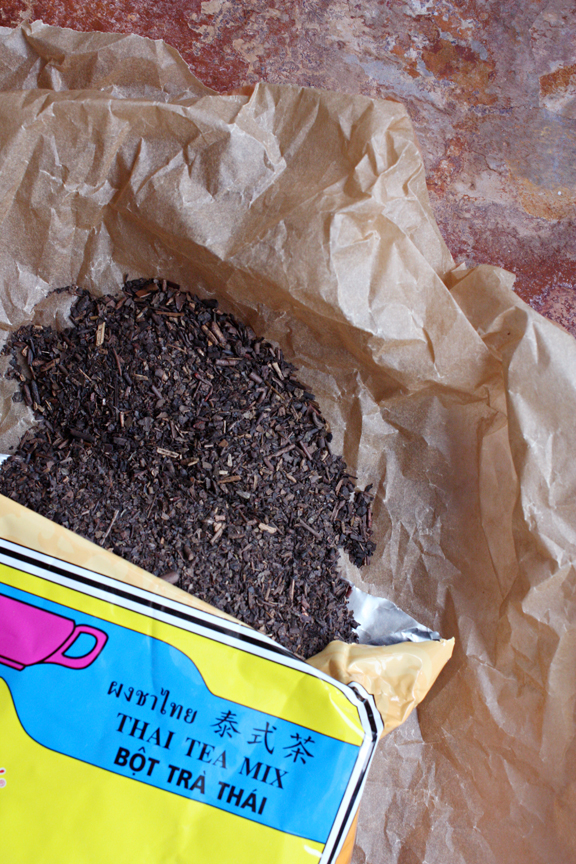 The Book:
Anyone familiar with the American culinary history of the past 40 years certainly knows of the Moosewood Cookbook by Mollie Katzen, a book that has become an American classic. Katzen has come a long way from her Moosewood years, however, and The Heart of the Plate: Vegetarian Recipes for the New Generation, her newest book, reflects the way she has been cooking and eating in recent years which is somewhat different from what it used to be when the Moosewood Cookbook first came out in the late 70s. One thing you will notice as you go through the book is that vegetables have assumed a much prominent place in the recipes.

I have tried 4 different recipes from The Heart of the Plate, namely this cheesecake recipe, hazelnut-wilted frisée salad with sliced pear, asparagus puff pastry tart, and banana-cheese empanadas. They’re all great. If you haven’t bought this book, may I please encourage you to do so? 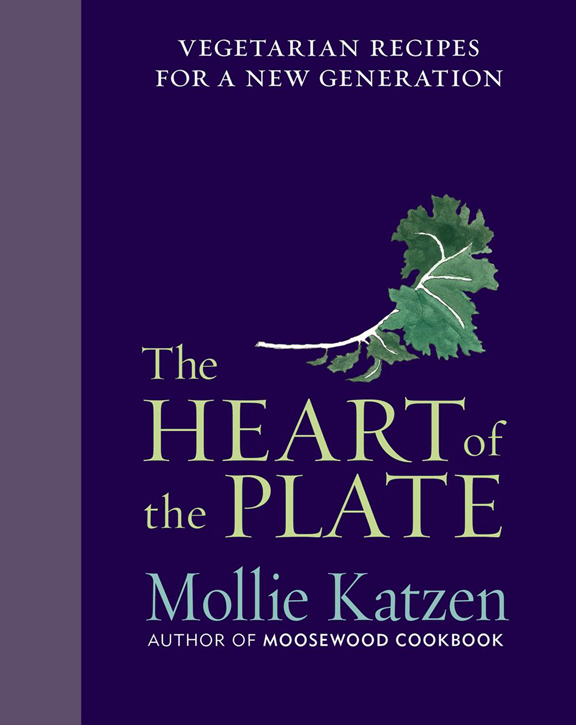 Mollie Katzen:
I wasn’t born early enough to count myself among the first users of the Moosewood Cookbook when it was released. But long before I came to the United States to further my education, I knew of Mollie Katzen. And this is how it happened.

When I was growing up, my mother had a group of acquaintances who were American missionaries working in Bangkok. It was through them that she discovered this brilliant, amazing American thing called, “yard sale.” And whenever Nancy, one of Mom’s missionary friends, called saying she was having one of those sales, my mother would set aside whatever she was doing and jump in the car. Knowing there would be lots of old American food magazines and cookbooks — my favorite things — to be had, I, of course, always asked to tag along. Our giddy exuberance of unholy proportions is kind of hard to explain to people outside our little cookbook-crazy family, but that’s how it was with us.

I remember this vividly as if it happened last week.

As we went through piles and piles of books for sale at Nancy’s house, I found a charming cookbook so well-used and worn out that the spine was coming apart. I flipped through its stained pages and immediately fell in love with the drawings and handwriting even though, not knowing much English back then, I barely knew what it said. But it didn’t matter. I told Mom I wanted that book. Finding no price sticker on it, Mom took the book to Nancy to ask how much it cost. Instead of naming a price, Nancy responded by shrieking, snatching the book from Mom’s hand. She had no intention of ever parting with that book, Nancy explained; it was put in the sales bin by mistake.

The book was now safely cradled in the arms of its owner, and I felt a little heartbroken. All I could do was looking longingly at it for the last time. Moosewood Cookbook. Mollie Katzen. I never forgot either name. 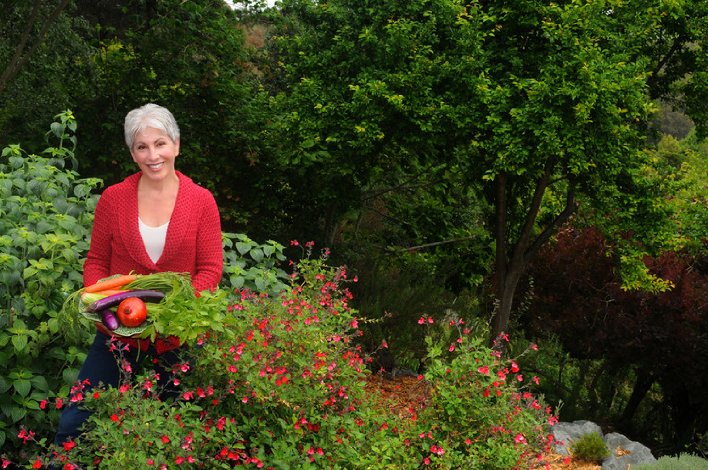 Mollie Katzen (photo credit: Lisa Keating)
Fast forward several years. This time I was a new student in the US, visiting one of my American classmates’ home one afternoon as her mother was watching a cooking show which she had taped a few years prior. On the screen was a lady — beautiful, soft-spoken but charismatic. She was making—I think—a chocolate cake. I stood there, hypnotized.

After Mom’s missionary friends had gone back to their home country and there were no more spiral-bound church cookbooks to buy, I spent quite a bit of time at the American University Alumni Association library in Bangkok, reading American food magazines and cookbooks. I was definitely gaining more knowledge on the subject, but American cooking was still something I had experienced solely through written words.

Watching this lady cooking, explaining, smiling, lovingly plating her food on TV, I could feel that what I had read up to that point in my life was drawing its first breath – it came alive.

“Is she a chef?” I asked my friend’s mother.
“That’s cookbook author, Mollie Katzen,” she answered.

Wait, I know that name.

What happened next was that all of the little extra money I had saved up from working part-time in the school library went into a brand new copy of Katzen’s Vegetable Heaven, the book that went with the PBS program I saw at my friend’s house. It was the very first English-language cookbook I ever bought in the United States. I started cooking from it right away, and, in the course of that, my understanding of a cuisine other than my own grew in ways that extended beyond the intellectual realm. My comprehension of English and English cooking terms grew. My love for cooking grew.

My mother was the one who inspired me to cook. She was the one equipping me with all the resources to help me retain the cooking tradition I grew up with. But Mollie Katzen is the one whose work inspired me to venture out of the safe and familiar territory of Thai cooking. Through her books, I found comfort and strength during the period of adjustment to a new place, a new culture, and a new cuisine. I even began dreaming about what it would be like to write about food, how much joy it would bring me to share what I knew with people.

If this site has been helpful to you these past few years, if there’s anything of beauty, value, and usefulness in it which has made your life better in any way, know that it is only because of people such as Katzen who have paved the way. And, so because of this, I’d like to dedicate this post to Mollie Katzen who wrote books, sketched vegetables, painted flowers, taught people things, and made chocolate cake on TV — all the while probably having no idea the kind of impact she had on the life of someone from the opposite side of the globe. 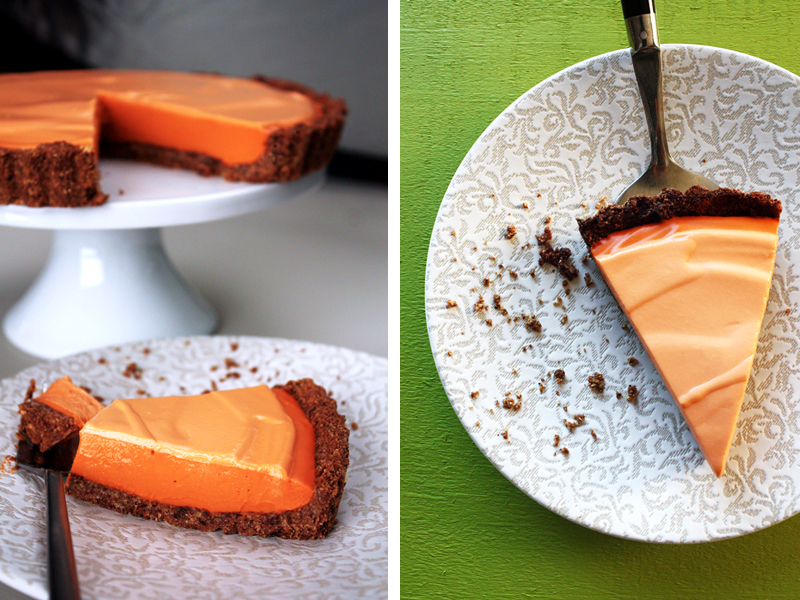 5.0 from 3 reviews
Thai Tea Cheesecake with Chocolate Crumb Crust from The Heart of the Plate: A Tribute to Mollie Katzen 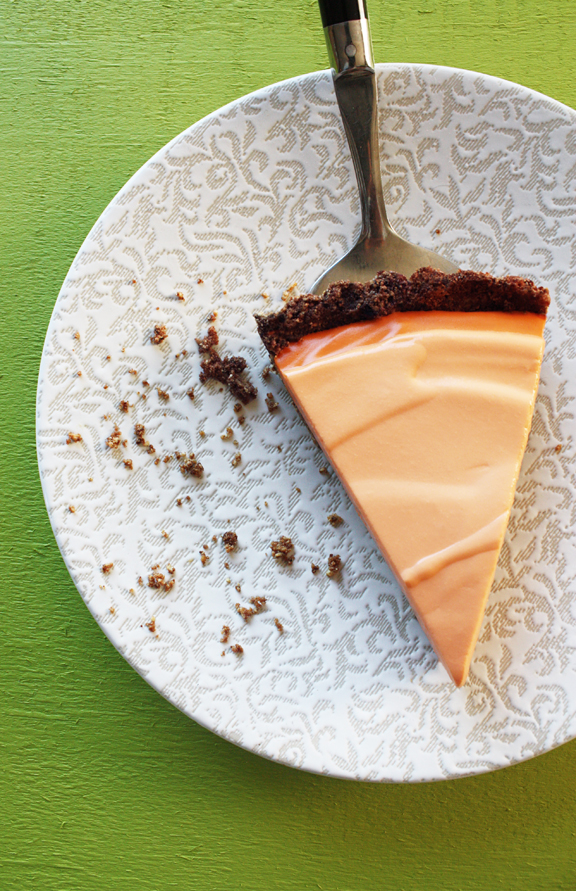 Print
Cook time
10 mins
Total time
10 mins
Author: Adapted from The Heart of the Plate by Mollie Katzen
Recipe type: Dessert
Serves: 8
Ingredients
Instructions
Notes
For this recipe, steep ½ cup of Thai tea mix in 2½ cups of boiling water for 10 minutes. Strain through a fine-mesh strainer, pressing out as much liquid as you can from the tea leaves. This produces enough strong tea to use in both the filling and the topping.
Wordpress Recipe Plugin by EasyRecipe
3.2.1255
Stewed Pork Hocks on Rice (Khao Kha Mu ข้าวขาหมู) by Nong of Nong’s Khao Man Gai
Shrimp Paste Relish with Lime Rind (น้ำพริกผิวมะนาว) and a Little Ghost Tale

27 Responses to Thai Tea Cheesecake with Chocolate Crumb Crust from The Heart of the Plate: A Tribute to Mollie Katzen