By Leela on January 15, 2012 in She Deglutenizes, She Explores, She Fries, She Interviews, She Thais 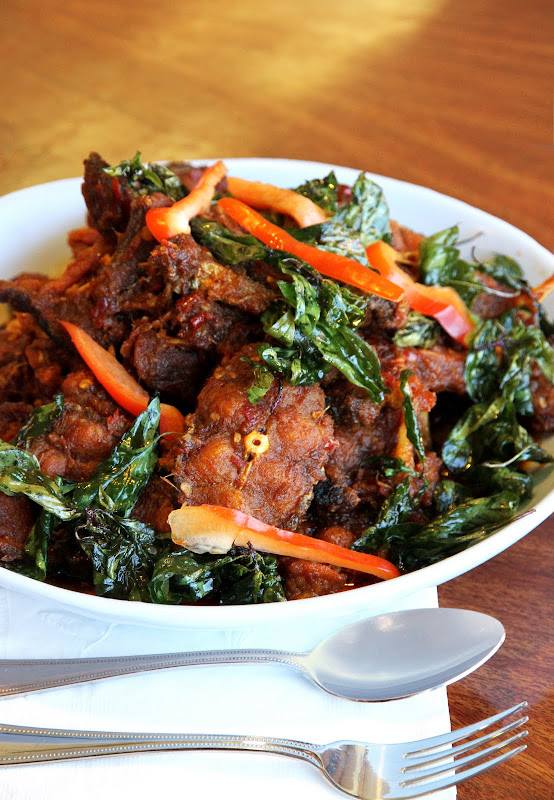 The dish as served at Ganda

“Let’s just get right to it,” writes James Oseland. “Ganda, a restaurant in the heart of Hollywood’s Thai Town, serves the most authentic Thai food in America.” Coming from someone else, this bold declaration would probably cause any Thai – and I mean those weaned on rice and nam phrik – to cock their head to one side and squint while inevitably and involuntarily entering the initial stage of knee-jerk skepticism.

But — lo and behold — this comes from someone who happens to know a thing or two about the cuisines of Southeast Asia, and when I read that the editor-in-chief of Saveur ate at this place five days in a row during a visit to Los Angeles, this Thai’s ears perked up.

After her ears had resumed their normal position, as all perked ears must do at some point, she hopped on a plane to California, made three anonymous trips to the restaurant, and sat down for a chat with its owner on her final visit.

As anyone who has visited Ganda will tell you: what makes this place unique is the steam table that greets you as you enter.

Often mistaken as a sign of an all-you-can-eat buffet by those who are not familiar with the rice-curry shop concept, this part of Ganda instantly brought back to me fond memories of places (some of which have gone and some of which remain, to use the Beatles’ language) the moment I walked in. The bounteous steam table didn’t just greet me; it gave me a hug.

It is, in fact, this very feature of the restaurant that Oseland has cited as the clue to Ganda’s ‘authenticity’ which – if I was to guess – his way of saying that this is what and how people really eat in Thailand. He would be correct for rice-curry shops (ร้านข้าวแกง ran khao kaeng) are at the core of our casual eating-out culture.

And that’s essentially what Ganda is – a neighborhood ran khao kaeng and a decent one at that.

The dishes on display at the restaurant bear the marks of quality rivaling that of what’s found at above average khao kaeng shops and stalls in the motherland. Glistening fried pork cutlets with steamed sticky rice are just as tempting as what you’d find at premium food sources such as Or Tor Kor Market. Succulent pork belly Pad Prik Khing (ผัดพริกขิง) with vibrant, tender-crisp green beans nestled on its side? Add a few salted duck egg yolk halves on top, and it becomes a dead ringer of the same dish available at the legendary Sri Tha Phrachan (ศรี ท่าพระจันทร์) or the pre-renovation Methavalai Sorndaeng (เมธาวลัย ศรแดง) in Bangkok. Then there’s kaeng khiao wan luk chin pla (แกงเขียวหวานลูกชิ้นปลา), fingerroot-accented green curry teeming with bouncy fish dumplings each of which sports a familiar thumbprint indentation. They’re made from scratch by hand; you know just by looking.

Huge pots of poorly-made soups that require one to put on a frog man’s suit and dive into a vast, anemic body of liquid just for a piece of meat? You don’t find those here. A curry of Siamese cassia (แกงขี้เหล็ก) so thick, so luscious, so good your knees go weak? Oh, yes. 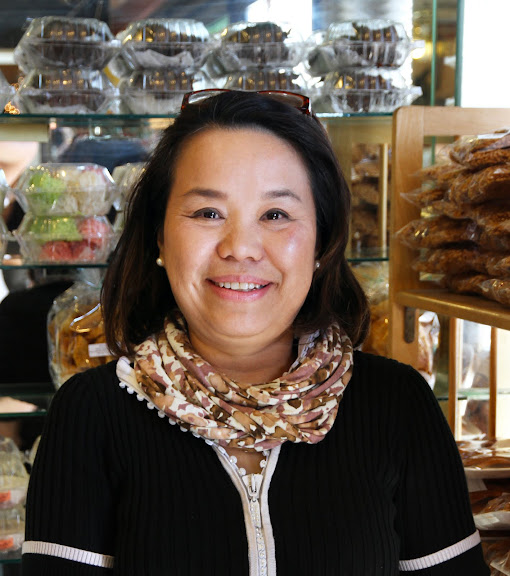 Sineenart “Sue” Klinmalai
“I make sure everything is ‘thueng phrik thueng khing’,” said Sineenart “Sue” Klinmalai, chef and owner, of the way they prepare and season food at Ganda, employing the literal use of a Thai expression denoting something akin to ‘no holds barred.’ “We only make what we like to eat,” she said. “And we make everything the way we would make it at home.”

You see, I’ve become a bit cynical. Every Thai restaurateur I’ve spoken to has said the same thing. That, I suppose, is their way of saying they serve their customers only what they consider good enough to make and eat in their own home. And I don’t question the truthfulness of it. But here’s the thing: this statement doesn’t mean much unless one cooks well at home, and clearly not everyone does.

But if the food at Ganda is any indication, I wouldn’t mind eating at Klinmalai’s home every day if she’d let me.

Not bad for someone with no formal culinary training. Unable to learn from her parents who were not skilled in the kitchen, Klinmalai latched on to her friends’ parents who knew how to cook and watched them like a hawk. The tenacity of her youth has paid off quite handsomely.

Having said that, it would be dishonest of me to say that I’m blown away by everything on Ganda’s steam table or that I think each one of the dishes on there is the best version of what it is. Then again, to be fair, the same can be said of even the best of rice and curry places: some dishes shine brightly and some fade into the background.

One of the dishes on Ganda’s steam table that refuse to be forgotten would be pad ped pla duk tod grob (official transliteration: phat phet pla duk thot krop ผัดเผ็ดปลาดุกทอดกรอบ) or spicy crispy catfish in thick red curry sauce which Oseland says in the aforementioned article that it is his favorite thing to eat in the city of Los Angeles.

The catfish dish truly is the star of the show. Remove, say, the clear soup of pork rib tips and young bamboo shoot slices from the steam table and it’s unlikely bosoms will heave in sorrow across town. But without the crispy catfish, clothes would be rent and heads covered with ashes. I told Khun Sue that.

“Oh, the catfish dish?” the chef chuckled, shaking her head in good-humored weariness. “I’ve thought many times of pulling that off the menu.”

Cost is the reason cited. The price of catfish has more than doubled since the last burst of inflation; it has not come down since.

Knowing this, I thought it would be best for us fans to know how the dish is made in the event it becomes so cost-prohibitive that it’s no longer available there. So, at a risk of rejection, I asked Klinmalai how she made the dish.

It was my lucky day for instead of telling me to get lost in a hurry, the chef graciously led me into the kitchen.


They make their own curry paste at Ganda by doctoring up commercial red curry paste by adding in some fresh herbs – the same herbs already found in the paste – just to enliven it. No exact measurements were given, and, though I tried, in the end the only thing I got out of Khun Sue was a generic recipe for this rice-curry shop staple.

It’s obviously not the way they do it at the restaurant, as you can see from the video clip, but the following method, she believes, would work better for home cooks. It’s merely an approximation, she says.

Start out by deep-frying about 1.5 pounds of 1/3-inch thick catfish steaks until the catfish pieces are dry and thoroughly crispy. This is utterly important, says Khun Sue. Unless the moisture is completely removed from the catfish steaks, they’ll get soggy when doused with the curry sauce. (At Ganda, catfish steaks are fried until the bones are so brittle you can chew through them.) 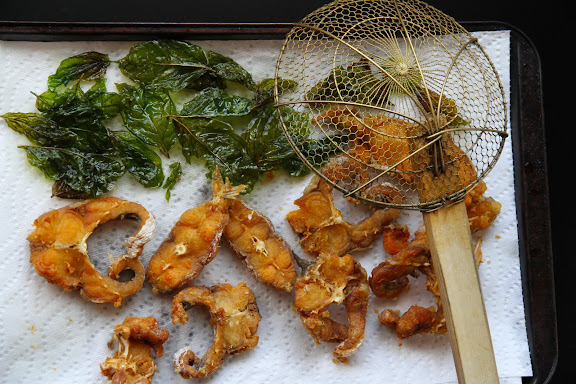 You set the fried catfish aside and make a sauce by frying up about 4 ounces of commercial red curry paste, about 2 large cloves of garlic all chopped up finely, 3 tablespoons of sugar, 2-3 tablespoons of fish sauce, 2-3 kaffir lime leaves torn into pieces, and some kra-chai. Then you add the fried catfish steaks to the sauce, stir lightly until the fish pieces are thoroughly coated, and it’s done. The dish is then garnished with deep-fried basil leaves and slivers of red bell peppers.

As you can see in the video, at Ganda, the sauce has been pre-seasoned before it goes into the pan. Also, it’s not pasty; it’s loose and liquid. Then only when the sauce has become more concentrated does Khun Sue add the fried catfish. And I was thinking: even with a scaled-down recipe, there should not be any reason why home cooks cannot employ the same method.

So I put on my mad scientist hat and decided to clone this dish my own way. After 3 tries and a few burnt spots on my arms, I think I’ve got something with which I am extremely satisfied.

I have to say, though, that I hate making this dish at home as much as I love to eat it. It’s time-consuming and messy; it requires too many steps. If your local Thai restaurant serves this, lucky you (here’s hoping it’s as good as Ganda’s). If you live near Thai Town, Los Angeles, by all means, run to Ganda. The rest of you to whom neither situation applies, you can try following my recipe below. 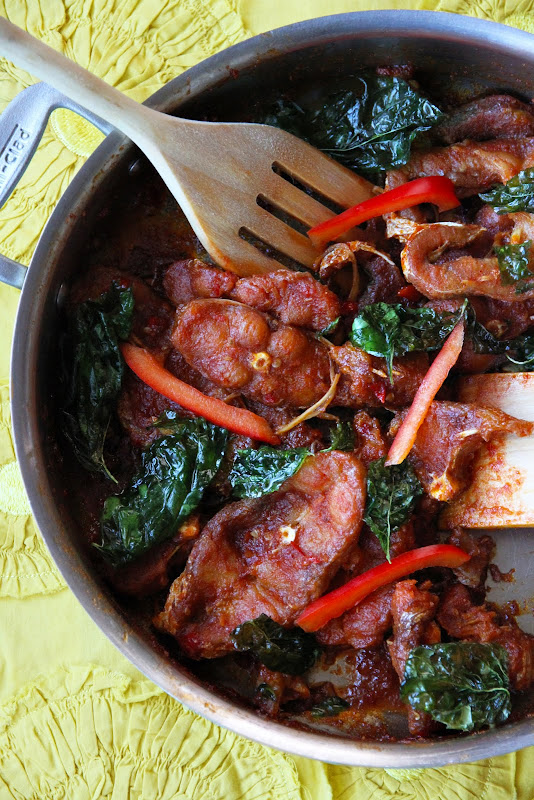