How to Prepare Rice Vermicelli (Khanom Jin) from Dried Noodles

By Leela on August 29, 2017 in Bangkok Recipe, She Deglutenizes, She Simmers, She Stocks a Thai Pantry, She Thais, She Veges, Uncategorized 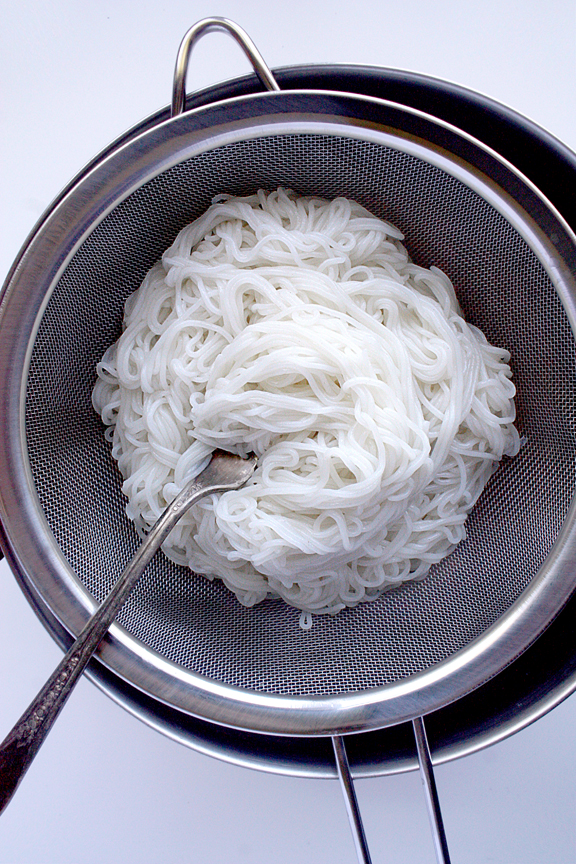 Years ago when I first came to the US, one of the products that I missed the most was the type of rice vermicelli that the Thai people call khanom jin (ขนมจีน). The noodles weren’t available fresh anywhere, which is understandable considering how difficult it is to make them at all let alone on a large scale commercially. The dried noodles labeled as khanom jin (RTGS: khanom chin; also informally romanized kanom/khanom jeen) on the market were also of subpar quality. Some people used the Japanese dried somen noodles instead, but I found them to perform so poorly as a substitute for khanom jin that I didn’t bother with them. My only choice was to make peace with the fact that if I wanted to eat khanom jin without being disappointed, I would have to wait until my next trip to Thailand.

Then things started looking up when the local Asian markets in Chicago began carrying a product labelled “Guilin Vermicelli” which is extruded rice noodles in dried form. Once cooked, this product yields rice noodles that are as close to fresh khanom jin as I have found to date.

This is great news. But a couple of caveats:
1. These dried noodles produce fresh khanom jin. If it’s the fermented “sourdough” type (which, in my opinion, is superior) you’re after, you still need to make a trip to Thailand.
2. You need to know how to cook these dried noodles the right way, because they’re not like wheat pasta. Cooking them according to package directions (which are helpful, but only to a point) will give you noodles that range from so-so to unbearably mushy; cooking them exactly the way I’m about to tell you here will give you soft yet springy noodles—just as they should be—every time. No starchy pile of mush here.

Oh, by the way, I’ve translated (and provided notes to) an article on the history and cultural context of khanom jin, written by Ong Bunjoon, a scholar in Mon studies, in the inaugural issue of Dill Magazine (a magazine that you cannot afford to ignore if you cook or teach or write about Asian cuisines).

Also, if you have Bangkok cookbook, knowing how to cook these dried noodles will make things much, much easier for you when you make all of the classic dishes in it.

Okay, back to how to cook this thing. 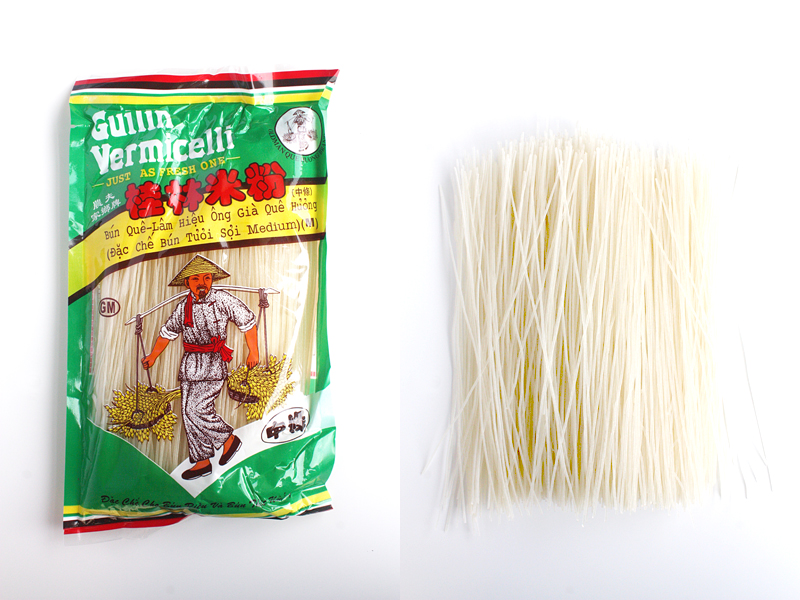 I like Que Huong brand (not a sponsored post) of guilin noodles. Both size S noodles or size M noodles work well (in fact, I don’t see a big difference between the two). One package will feed 4 people generously given that the noodles are usually assembled with a meaty broth into a soup or served with something else on top. I wanted to say it feeds as many as 6 people, but let’s be on the safe side.

Then get the right cooking vessel which must be quite deep (at least 4 inches) and is able to hold at least 4 quarts of water.

Fill the pot half way with about 2 to 2 1/2 quarts of water, cover to minimize volume loss through evaporation, and bring to a boil over the highest heat. When the water boils, lower the noodles into it, stirring to separate them and pushing them down so they’re fully submerged. Cook, uncovered, 5 minutes (regardless of which size noodles you use), lowering the heat a little—just enough to prevent the pot from boiling over which it tends to do.

This amount of dried noodles should release most of their excess starch after having been boiled for 5 minutes in this amount of water at a full boil. After the 3-minute mark, you will see the noodles are swimming in starchy, cloudy water. If you allowed them to cook in this starchy liquid all the way, you’d end up with cooked noodles with a mushy, starchy texture, even though you give them a good rinse at the end. The whole point of this post is to prevent that.

After 5 minutes, take the pot off the heat and carefully pour its contents into the strainer. Execute the following 2 steps as quickly as possible.
1. Rinse off the starch that clings to the side of the pot and fill the pot half way with water again. Cover and set it on the highest heat.
2. While the water is boiling, turn your attention immediately to the hot noodles. Rinse them with cold tap water, stirring them around with your hand to loosen them up and to allow water to wash off the starch that clings to them. (At this point, the noodles should be soft but still too chewy.) The water should run clear and the noodles should feel light and “clean” in your hands. Shake the strainer to get rid of the excess water.

Now you can relax a little and wait for the water to boil. When that happens, immediately stir the noodles into the boiling water and put the strainer back in the sink. Now, this is where you have full control of your destiny and that of your noodles. The noodles have been partially cooked and the excess starch is no longer there to stifle their potential. You’re cooking them again this time to bring them from partially cooked to fully cooked. Do a strand test every 30 seconds to know for sure when to remove the pot from heat. About one minute of the second round of cooking should be enough for size S noodles whereas size M noodles may take 30-45 seconds longer (if in doubt, always err on the side of taking them off the heat too soon, because you know you can boil them again). It’s very important that you work quickly in pouring the contents of the pot into the strainer, rinsing the noodles with cold water, and draining them again just like the last time.

Once rinsed and drained, unless they’re used right away, the noodles tend to clump up as they stand. Don’t worry. Prepared this way, they’re fine. All you have to do is rinse them with hot tap water both to loosen them up again and to increase their temperature a bit. Give them another few shakes and they’re good to go. Don’t worry about them not being piping hot. Khanom jin noodles are nearly always served or assembled when they’re at room temperature in Thailand. 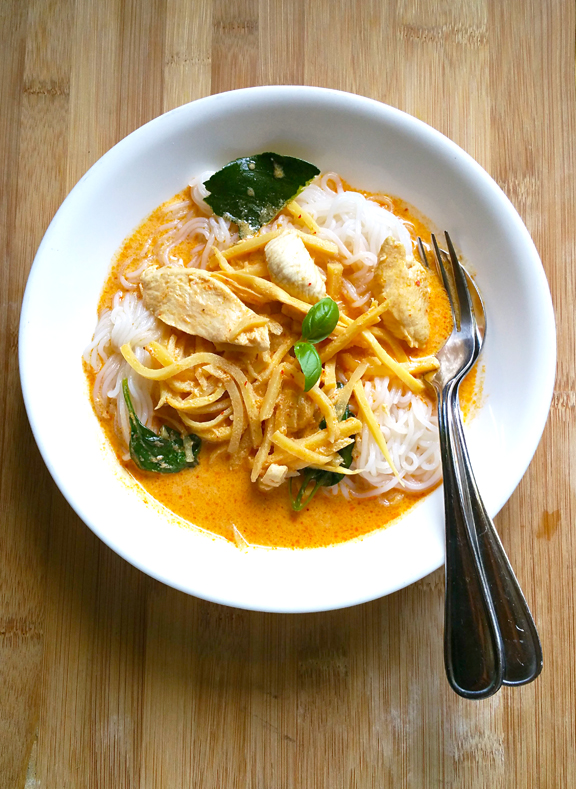