By Leela on November 3, 2014 in She Bakes, She Braises, She Deglutenizes, She Explores, She Roasts, She Simmers, Uncategorized 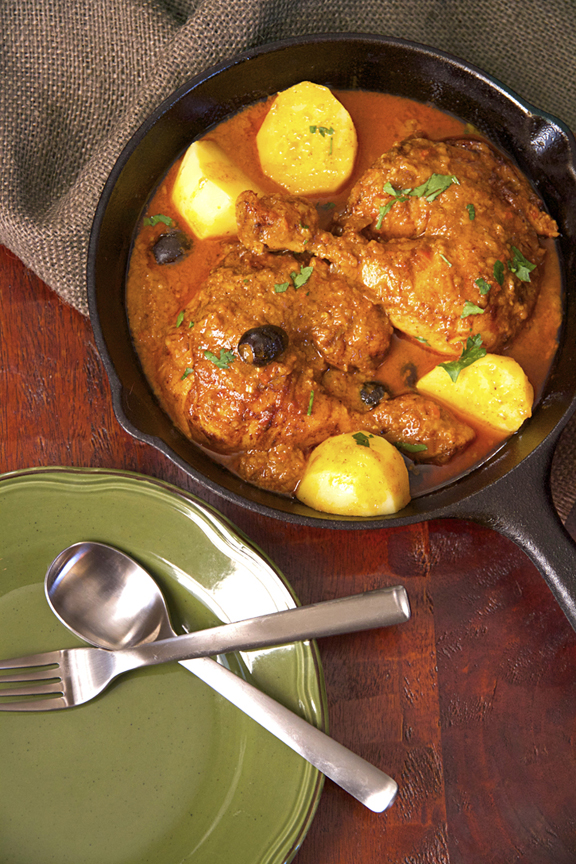 I had a chance to visit Macau for the first time as an adult this past summer. After the first few hours there, I realized I should have planned a longer stay. I ate as well and variedly as I could, but even so I barely scratched the surface in terms of what this place has to offer. There is so much to see, experience, and eat there.

One of the places that everyone had told me to visit is Henri’s Galley, a little old-school restaurant that serves traditional Macanese dishes. It’s a little out of the way, they said, but it’s good. And, oh, they added, you gotta have the African chicken, the restaurant’s flagship dish.

You see, I’d always known that Macau was once a Portuguese colony and I expected Macanese cuisine to reflect the influences of both Chinese and Portuguese cooking. But, in my limited knowledge, the word ‘African’ seemed, at first, to have come out of nowhere. And initially I reacted to it the same way I did a few years ago to the ‘Korean’ salad at a Kyrgyz restaurant (I’m sure anyone unfamiliar with American fried rice would have a similar reaction when they’re told it’s a Thai dish).

But it makes sense since Portugal had colonies in Africa, and when it met up with Southern China, it had brought with it the African cooking tradition. The result is the rich cuisine that we know as Macanese. 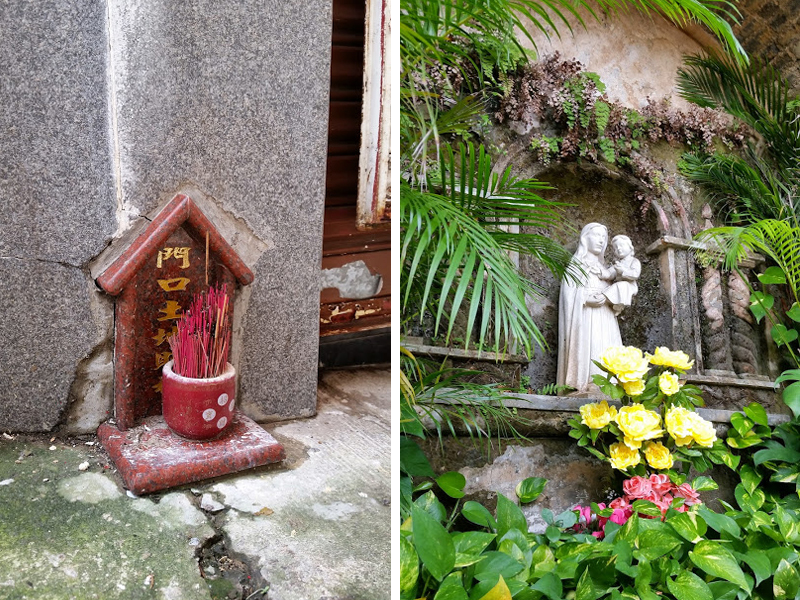 Regardless, there I was, sitting inside Henri’s Galley at a table by the door, looking out to the street and Sai Van Lake. In front of me, on the table, was a paper placemat featuring what appeared to be the recipe for the dish that I was told not to miss, the one I’d just ordered: Galinha à Africana. Apparently, the recipe was published in Gourmet magazine wherein it was dubbed ‘Spicy Marinated Chicken with Peanut and Paprika Sauce.’ 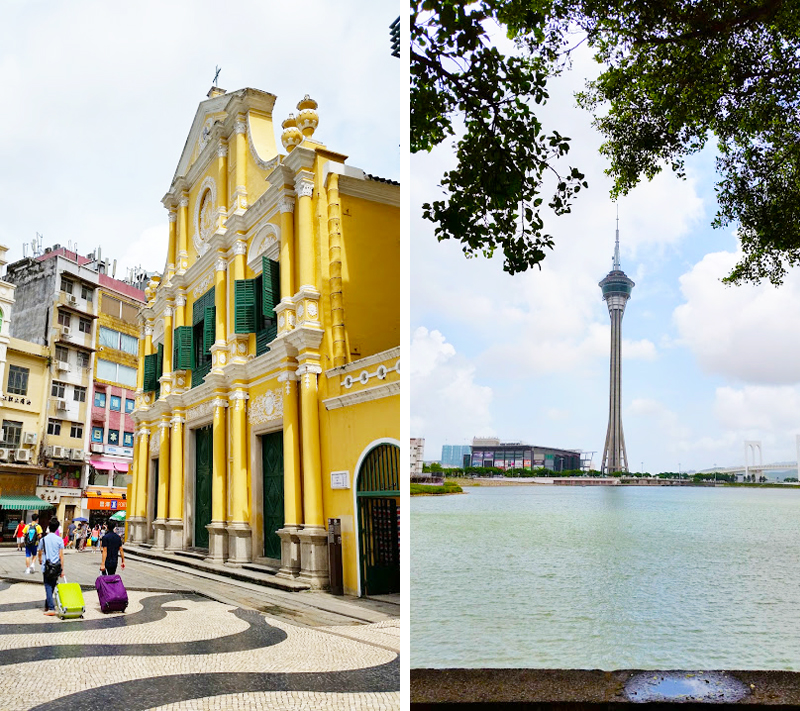 Well, ‘recipe’ probably isn’t the right word as what I saw was just an ingredient list, and it was a straight photocopy job from the way it looked. I have no idea when the recipe was published in Gourmet, but it was definitely before 2009 which was when the magazine ceased publication. This means unless you have access to Gourmet’s library of back issues or its digital archives, you’re not going to have the full recipe. I half-jokingly half-seriously asked the server where the rest of the recipe was, but he looked at me, giggled, and walked away. I guess that was a polite no. Or maybe a good-natured ‘forget you.’ Or both. The line between the two can be fine sometimes. 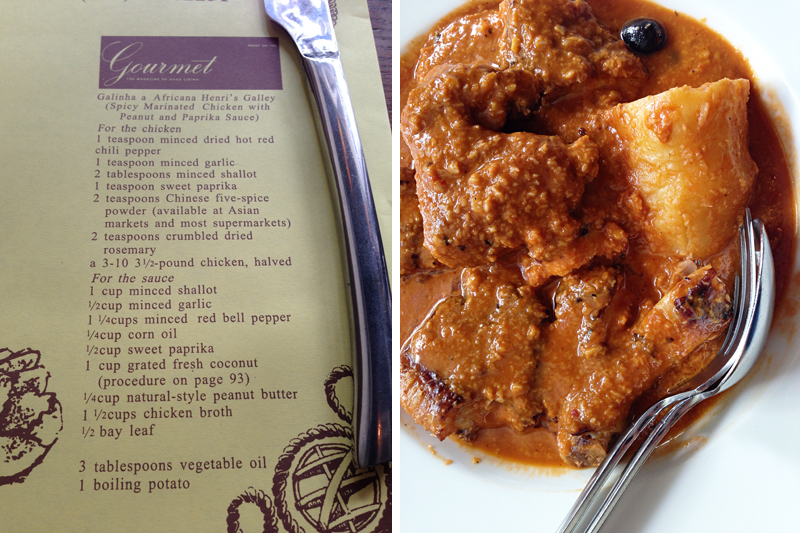 The placemat and African Chicken at Henri’s Galley

As my imagination was going wild regarding what the instructions on page 93 could possibly say (because it’s universal knowledge that there are many, many things you can do to, with, on, behind, in the presence of, beside, under, and over grated fresh coconut), the dish in question was placed before me. After having inspected, photographed, and thoroughly enjoyed Henri’s Galley’s African Chicken, the ingredient list had begun to make more sense. At least I was now armed with the knowledge of how the dish looked and tasted.

But a little more help couldn’t hurt. And it wasn’t long before I found a thread on eGullet where Henri’s Galley’s African Chicken was discussed. A user by the name of HKDave posted the missing part of Gourmet’s recipe for everyone to read. So I used that as a guide. 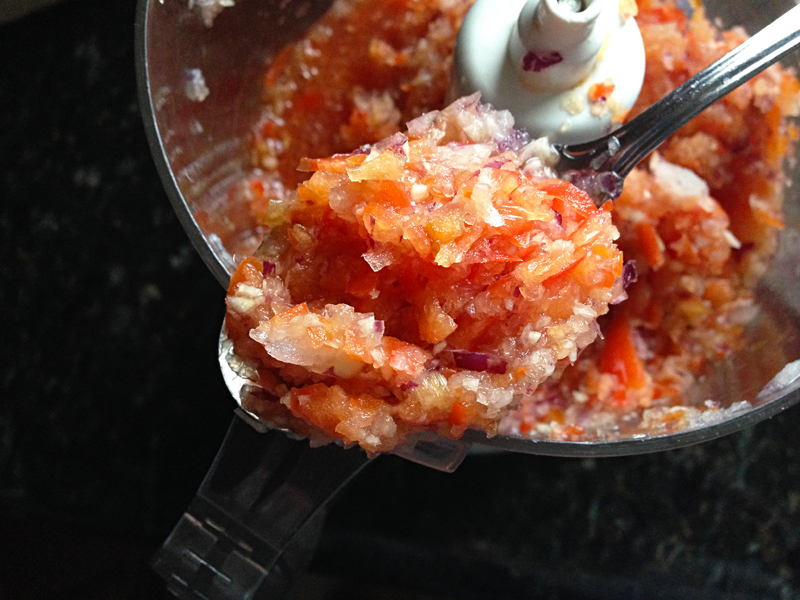 However, that whole thread was from 2003. And based on HKDave’s allusion to “the recipe that Gourmet Magazine published years ago,” I gathered that the recipe was older than the thread by several years. Would this recipe yield the dish as made in the summer of 2014?

So I set out to test the recipe that HKDave posted on eGullet, tweaking it to make it fit what I experienced that day. And the result was great, although I ended up with what I thought was twice the amount of sauce I needed to cover a cut-up, 3.5-pound chicken. So I reduce the sauce ingredients by half and tested the recipe 3 more times, streamlining it somewhat to minimize mess and dirty pans. The result is what you see below. 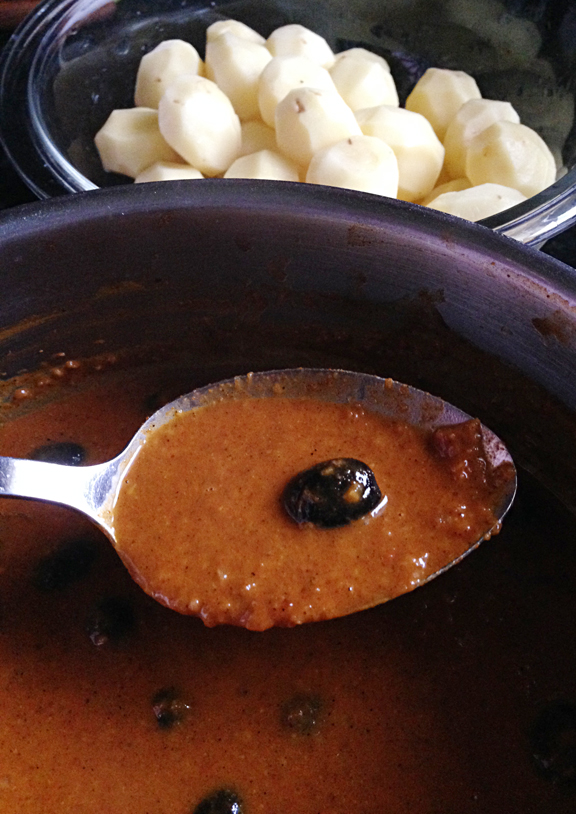 But, first, a few remarks:
1. I use whole chicken quarters (two leg quarters and two split bone-in breasts) here, but they hack the chicken into slightly smaller chunks at Henri’s Galley. You can do that by separating the thighs from the drumsticks right at the joint and cutting the breasts, bone and all, in half crosswise. This is extra work, but the payoff is that you can reduce the marinade time by half and the braising time by half as well (in this case, you will have to double the time parboiling the potatoes to make up for the shorter braising time). Your call.
2. The recipe has you brown the chicken in a pan. I’m lazy, so I broil the chicken pieces until partially cooked (but its skin is golden brown and slightly charred), pour the sauce over them, then braise them in that same pan. Fewer dishes to wash. No grease on the backsplash. Pretty much the same result.
3. I’ve tested the recipe with natural, unsweetened, smooth almond butter once for a friend who has peanut allergy. It worked very well, so there’s an option for you.
4. I use pitted black olives here, because even though they’re not on the ingredient list, they were in the version I had at the restaurant. But you can leave them out without any negative effects. But if you want to use them, be sure to use the inexpensive black olives that come in a can; I guess you can use kalamata or other fancier types of olives. But I’ve never tested the recipe with those, so be careful as they’re salty.
5. The recipe doesn’t call for any sweetener, but I add a tiny bit of honey to the sauce. It doesn’t make the sauce sweet, but it seems to soften the tastes of the garlic, shallots, and paprika. 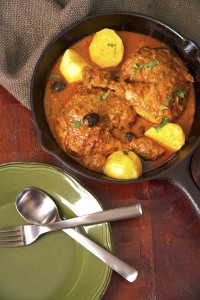