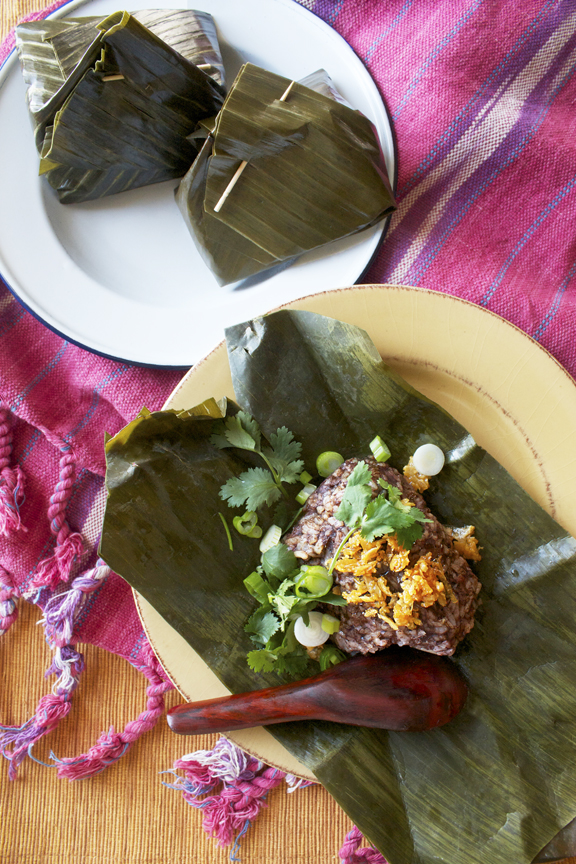 I’ve been away from the blog for a few weeks due to some travels and other things. But I’d be remiss if I didn’t come back in time to at least wish you all a happy Thai New Year—Happy Songkran, everyone!

Songkran won’t officially arrive until April 14th this year. But as I’m typing this on Sunday afternoon, the traditionalists in Thailand had already been visiting and paying respect to older relatives. The religious had already gone to their local temple for all sorts of Buddhist ceremonies. Many had already been enjoying khao chae, a full-on New Year feast of rice in scented iced water and all the elaborate accoutrements. And the fun-loving non-traditionalists had already started the water battle.

Maybe I shouldn’t tell you this, but Songkran isn’t one of my favorite holidays at all. I can get behind the true spirit of it which is to get together with your friends and family and celebrate another year together. The water fight? Not my thing. If I was in Bangkok during Songkran this year, I would most likely get away somewhere with the people I love, and that somewhere must be a place where the water splashing thing cannot reach.

[Warning: if you’re squeamish or absolutely can’t stand to look at blood, don’t read further. You may not like the photos you’ll see after the jump. Or perhaps you can focus on the text and gloss over the photos.] 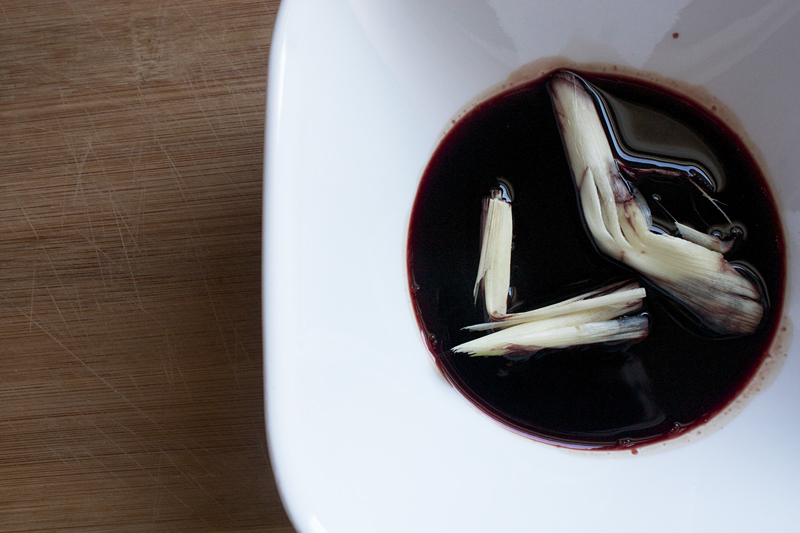 Well, actually there’s something really fun about Songkran—the superstitious, metaphysical part of it, that is. To understand why I have chosen to make this northern Thai steamed rice with pork and pork blood (ข้าวกั๊นจิ๊น) on the blog today, you need to understand the legend of Songkran first.

So, a reading assignment. Please read this post on the legend of Songkran and panko-crusted fried baby bananas with honey before you continue. This way you’ll have some idea what the heck I’ll be talking about in this post. Take your time. I’m waiting for you right here. 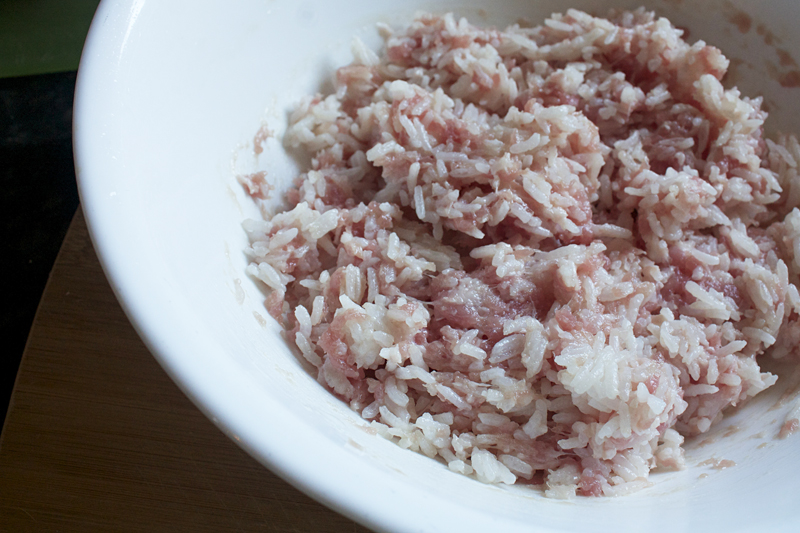 You’re back? Great. Now it’s time to tell you that I’ve been waiting for this year’s Songkran for so long. Why? The goddess that leads the procession this year is the most interesting of the bunch! Well, now that you’ve read about the Songkran legend, you know that each one of the goddesses has her own vehicle and her favorite food, right? Rakshas (Sanskrit-based romanization) or Raksot (RTGS), our Songkran goddess of 2015, will be arriving exactly at 2:24pm, local Thai time, on Tuesday, April 14th.

She’ll be arriving, seated on A PIG. Her favorite food? BLOOD.

A goddess who drinks blood and gets around on a pig.

You may or may not like Songkran. You may or may not hate the water splashing as much as I do. But you’ve gotta admit: it’s never dull. A bunch of women floating around in the firmament with a severed head? Not dull.

This Shan/Tai Yai dish of steamed rice which has been seasoned with pork blood (khao kan jin) seems like an appropriate welcome treat for our goddess. That said, I need to tell you that it’s not a Songkran tradition to make or serve something to welcome the Songkran goddess; this is something I do for fun—it’s my own thing.

And, oh, this has been both fun and delicious. True, this dish is made with blood, and that may not go down well with some. People in the north of Thailand don’t think of it as being anything other than a regular ingredient, though. If you eat boudin noir, you can eat this. The blood makes the rice deeply savory with just a faint tinge of iron-y taste. A friend of mine likens it to the American dirty rice sans the spices, and I can see why.

So if you’re okay with eating blood—thoroughly cooked blood—perhaps you want to give this northern Thai dish a try. 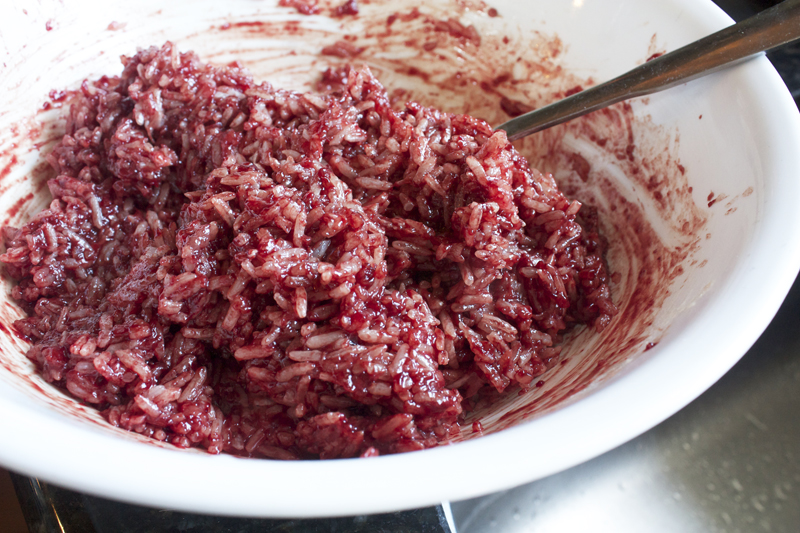 First, you need to get some pork blood. It usually comes frozen in a plastic tub and can be found at larger Asian grocery stores. Be sure to thaw it out in the refrigerator before using. For this amount, you won’t need to thaw the entire tub. The edges thaw first, so as long as you can pour out 1/4 cup for this recipe, you’re good to go and the rest can go back to the freezer. If you can find fresh blood, that’s even better. 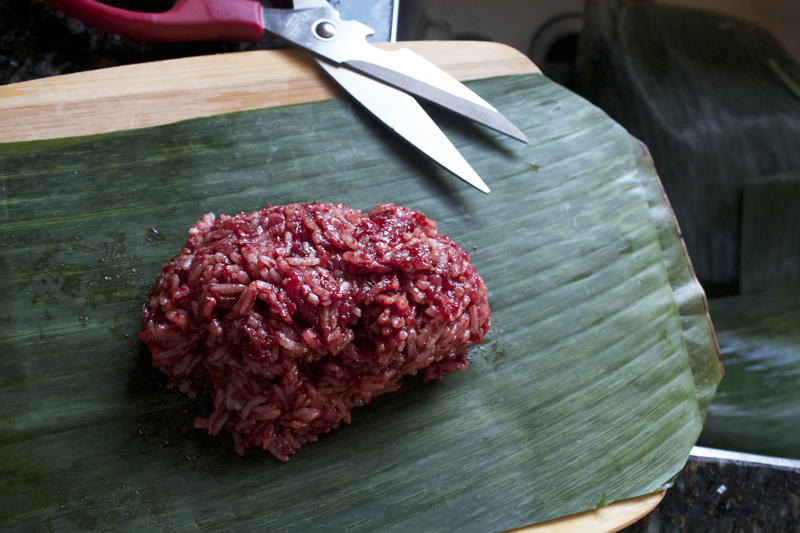 The rest is pretty easy. It’s just a matter of mixing everything together and steaming it. I recommend that you mix the ground pork and the rice by hand. Using a spoon is unwieldy and too time-consuming. But at the stage where you add the blood to the mixture, you can use a large spoon.

Be sure to thaw the banana leaves completely before cutting them into rectangular sheets as instructed below. Wipe them down with a damp kitchen towel before using.

Khao kan jin is usually formed into roughly the shape of a tent. The photo above shows you just how to achieve that. But if it proves too complicated, or if you’re new to working with banana leaves, I wouldn’t worry about it. The shape has little to do with the quality of the end product. As long as you make the rice mound compact and not all loosey-goosey, you’re fine.

Serve khao kan jin with crispy garlic and some chopped green onions (shallots work too) and cilantro. Fried dried red chilies are often served along with it, but if you don’t like them, there’s no need. 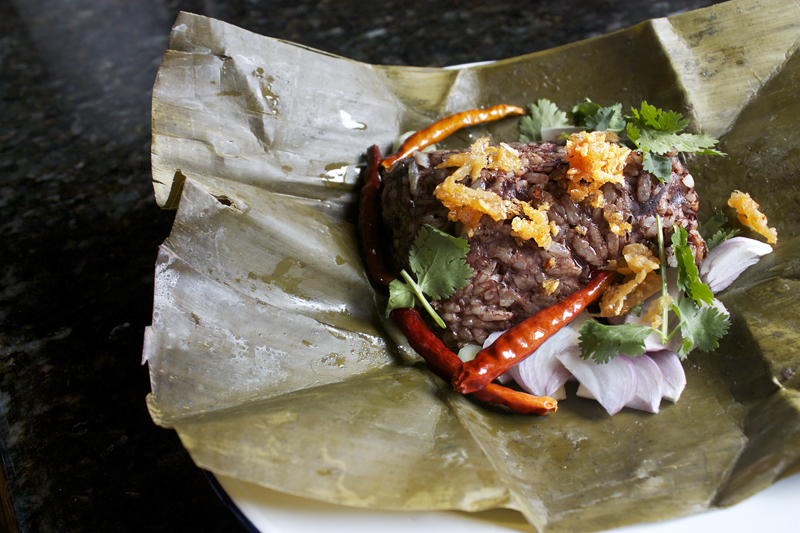 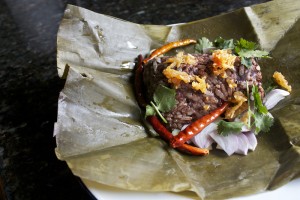